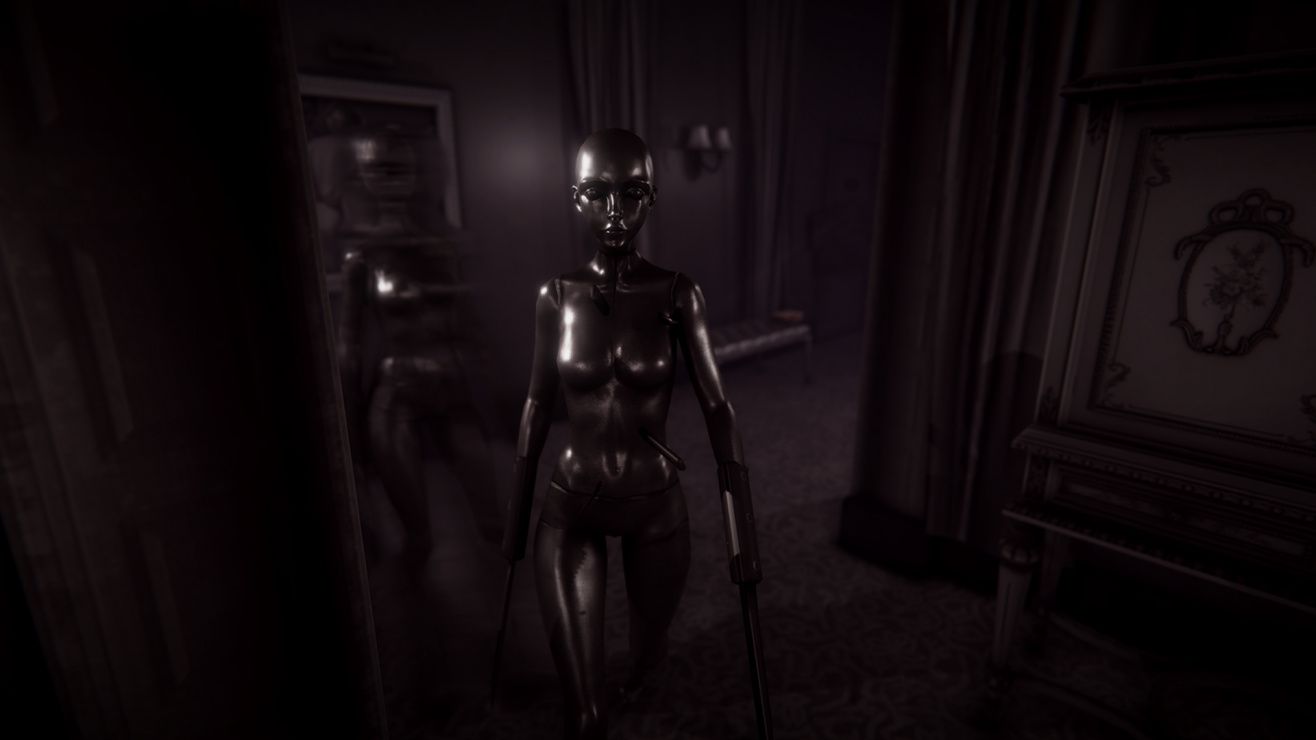 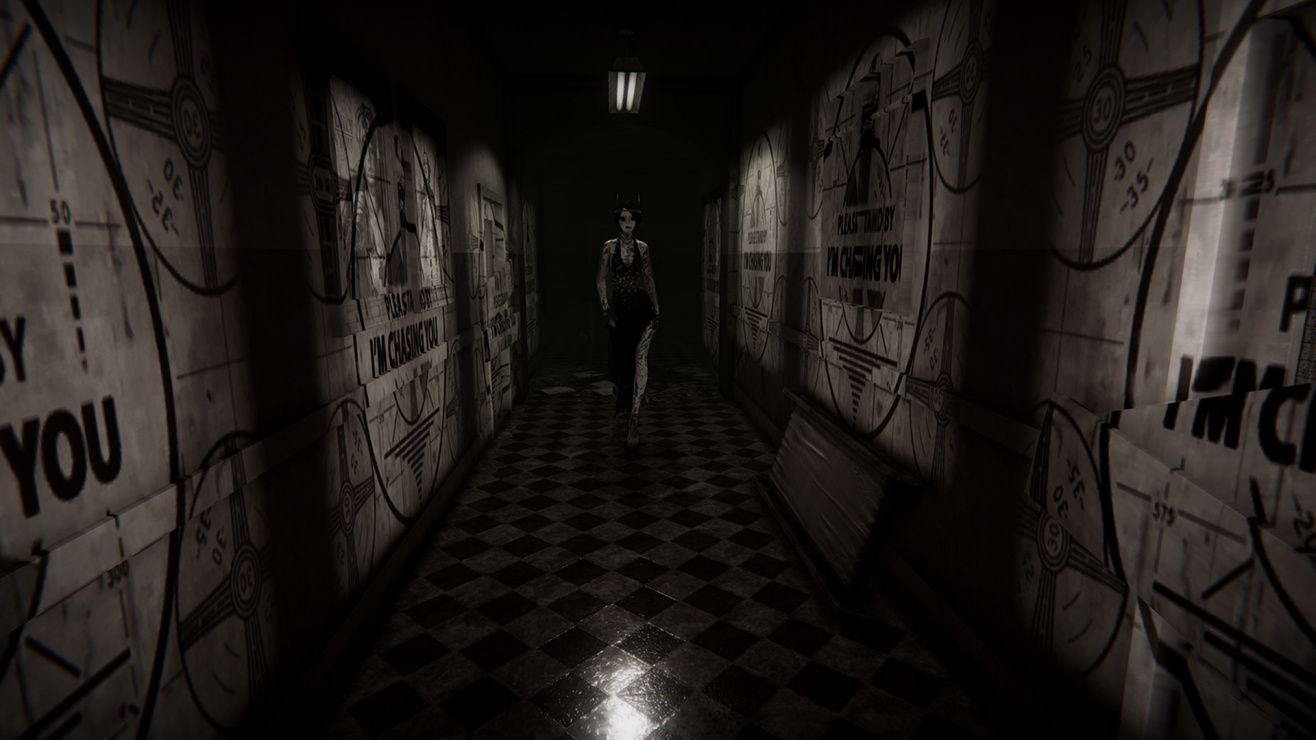 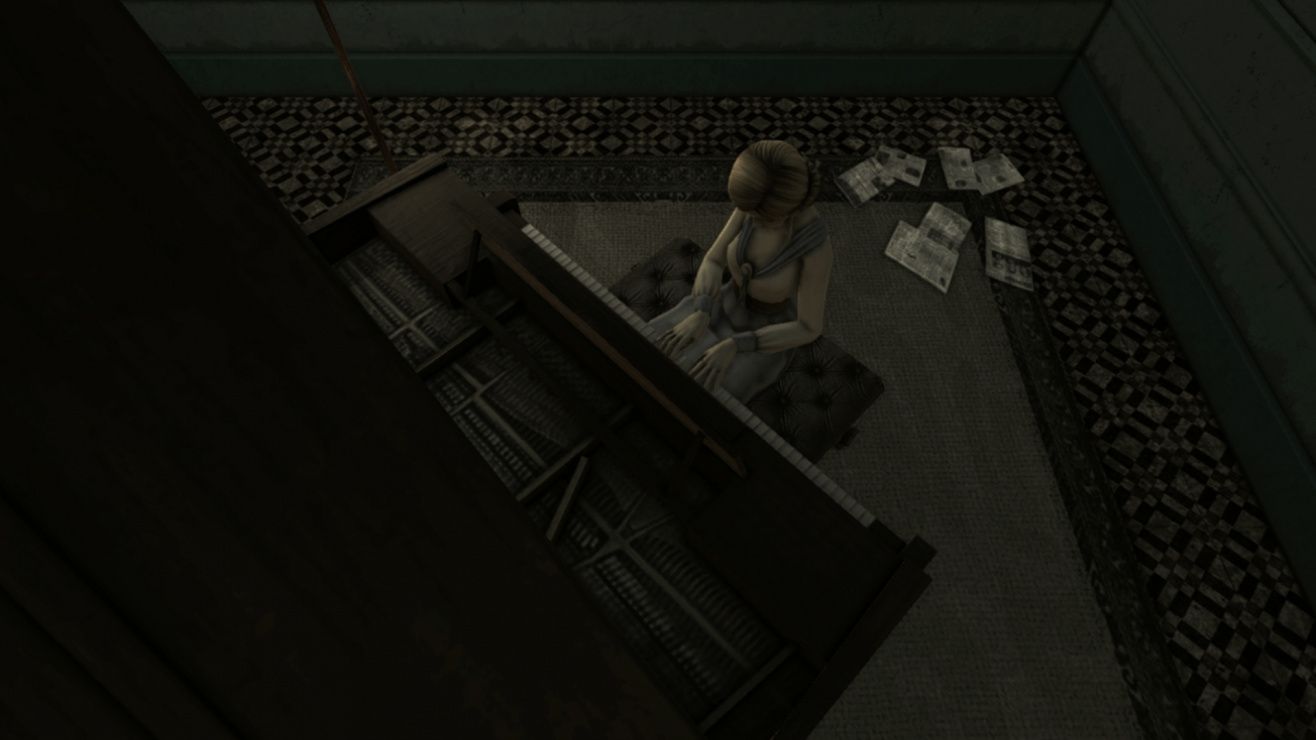 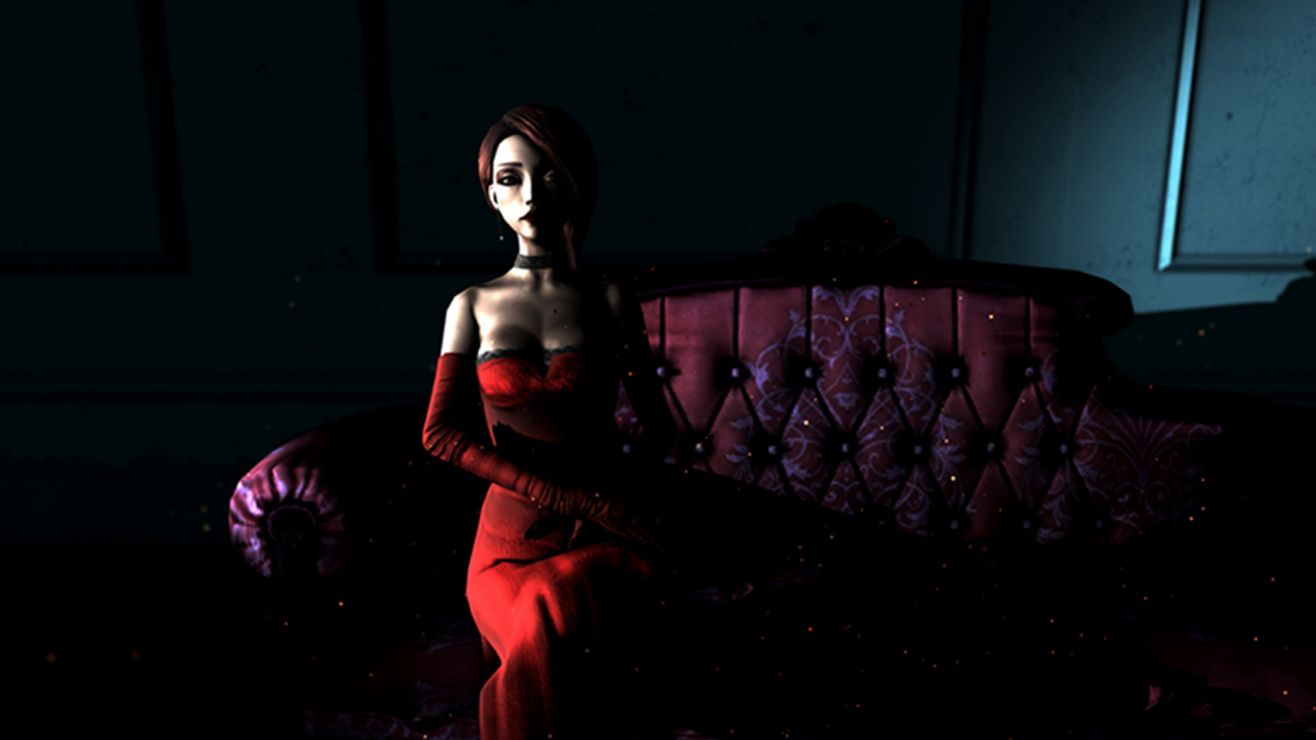 PC Steam Console Playstation indie puzzle atmospheric survival horror dark detective
This haunting horror game draws you into the mysterious atmosphere of film noir. Delve deep into the mind of Marie, a detective trying to unravel the secrets of her past memory by memory. Use the ‘Focus’ feature to see through the eyes of your pursuer as you try to survive a suspenseful game of cat and mouse.
Share Share Share
Promote for 50G

Sum up
+ Abilities come in a wide variety and are useful.
+ Choose how to experience the story in four singular modes.
+ The monster tracks the player, pursuing them instead of randomly showing up.
+ Voyeur mode for those that want to play the game for the puzzles and atmosphere.
+ Levels are designed as an elaborated trap with close corridors, puzzles, and monsters.
+ Dynamic generated maps for both singleplayer and multiplayer keep the maps unique and fresh.

Dollhouse was typical of indie games where the game was far from perfect on launch. Bugs, unbalanced gameplay mechanics, and map generation issues were a problem at first. I had trouble with pickups spawning half in the floor/walls and weird enemy hitboxes. Luckily the team seems dedicated to updating and (surprisingly) listening to community feedback despite the awkward launch. The story is solid and the gameplay has been reworked. Visually the aesthetic fits the noir vibe they’re going for and I like the music/general atmosphere but I wish there was a little more color. Its seen positive changes since last month and the updates have made the game more enjoyable. Originally I would’ve given this game a C- rating, but with the patches and general changes I’ll bump it up.
Final Score: B-

Preface
I don’t usually play horror games or review games but I am a fan of film noir which is why this has gotten my attention and I hope it gets more attention as I think it will have a cult following in a few years.
Intro
You play as Marie, a standard private eye that is basically Carmen Sandiego, instead of travelling the world stealing things, you are travelling in her mind stealing memories instead. You will be hunted down by some sort of entity in a cat & mouse experience. During your stay, you will fight different enemy types, solve a lot of puzzles, and analyze things for clues. In the end, you find out that it culminates to something very interesting and definitely worth your time as its something only unique to you, not anyone else.
Good
- A very interesting story that welcomes multiple playthroughs with a genius ending
- Interesting “Focus” mechanic that lets you see through the monster’s eyes and look for objectives
- A nice variety of abilities that players can unlock and use.
- A good variety of environments
- A nice variety of enemy types
- Amazing music & voice acting
- Inclusion of an aptly named “Voyeur” mode where players can play without dying
- Decent campaign length with a lot of replay value
Bad
- Confusing/ not enough information for mechanics/ elements
- Repetitive gameplay
- Still has bugs (I know the devs are hard at work fixing them, I can’t imagine how it was at launch)
- Can’t find a match for Multiplayer (I guess there aren’t enough players)
Summary
Dollhouse isn't your average horror game. It tries a lot of new things while some worked, some didn’t. If you are a fan of horror or film noir I urge you to check this game out. You won’t regret it!

The standout of this game is how hardworking the developer is. Rose’s Diagnosis updates have improved how the game plays. When I emailed the team about glitches I found they got back to me quickly and two updates later the problems I reported have been fixed. That kind of response is top notch.
Like other players have mentioned the story is what works well. The gameplay mechanics take a while to grasp but the tutorial emphasized practice and I learned the ropes by chapter 2. Sticking to it and finishing the tutorial was key because it gets easier. Chalk was the best, I used it to mark doors and stations because I am terrible with mazes. I abused the beacon feature to get a start on puzzles and the hints were good. My main issue was I like to run but the exhaustion would screw me because I would run into enemies when I was tired. If I could carry more charges to kill mannequins that would be helpful.
Gameplay was interesting with a big learning curve and the story was mysterious. I’d like to see a sequel where they can take what they’ve learned and make an even scarier world.

I want to give my early impressions of this game.
It's different. The atmosphere of Dollhouse is something unique. The music, the setting, it all really gives off Film Noir vibes, which is, in gaming, something that doesn't get explored as usually as it probably should, but when it does, for me is interesting. The way the main character is presented, you get the vibes that the story will be more than meets the eye, especially with, while not spoiling, the direction of some game aspects. It feels like an experience that the more you progress, the creatures and world will begin to make more and more sense in the context they're presented, and a story which will give you the satisfaction of piecing it together along the way that will feel rewarding. To a degree, from the environment, I found myself having the feeling I had, that I can only describe as what I felt during my initial exploration of the Bioshock games, or more recently, Evil Within 2. Something is wrong, and the more you understand, the more dangerous it becomes. I'm liking what I'm playing so far. It reminds me of the type of game I would love watching the Super Best Friends play. From what I've seen from negative reviews, complaints of repetitive gameplay are brought up, but from what I've played, I feel like it fits the style of the game. The puzzle solving, the pressure of always having to look around your shoulder in a maze setting. Not every release will blow you out of the park like God Of War, or Halo, etc. But I've been able to have some fun, in a genre of horror, that I usually personally stay away from. Does the game have some issues? Of course. It's rare even a AAA release comes out perfect. Considering this is a team early in their studio's life, I think it's fine. It's a smaller release, from a smaller studio that seems passionate about the project, and seems to be taking criticism head on, to make a fun experience. I see the type of game that reminds me of the days when companies were willing to take risks and try something new. Similar to the Xbox 360 and PS3 days, when new IP's had a better shot, and were willing to put out something different, because games are an art form, that has suffered due to the AAA market. I've enjoyed my experience so far, and hope to come back and update this once I've spent more time with it.

Masterpiece. A game in which you can play a long time. Interesting story, many ways to passage and difficulty levels. It looks like labyrinth where you must find memories and things that can help survive. On the every map there are many different versions of enemies and traps. Beautiful design at everything, from the menu to the little things in the game. The text and voice acting is amazing. Opportunity to gain experience and develop skills can help with strategy, also finding death points can return everything if character die, I find this gameplay comfortable. Besides the usual mode in the campaign, there are modes where you can turn off threats or die without returning, but for the first pass it's better to play normal mode.

Introduction
When i first bought this game, i was really excited seeing the videos & screenshots
on the shop page.
I decided that should be enough for me to get it, since i didn't wanna spoiler myself too hard.
So about 10 Minutes into the game i was really confused and the controls/gameplay
didn't feel all too good or inviting at all, after 50 Minutes i've already gave up without even close to beating the first level; (noting that and with in my mind that while playing this game had a review rate of 50% positive 50% negative, most players with short gametime leaving a negative review and vice versa for people that played it longer. ) So i left the game for the day and returned the next one. Everything still felt kinda weird there was no real "handholding" or guideline which i'm not used to.
Nonethless i wasn't gonna give up on this game and as i really liked the idea & the setting behind it. Everytime i logged on to play it i've learned something new, and the story kinda bound onto me, i slowly got the grip of it and it started to actually be fun, the story took me into it's binding so that i just had to know what else will come.


Voice acting
The Voice acting overall is really good, except the pursuer ( "enemy" ) can sometimes repeat itself pretty often which can get annoying over time if you deal with it a little longer.
Soundtrack
There's not much to say about the Soundtrack except that it fits really well with the atmosphere and has overall a really good taste with it.
Setting
Interesting ambiente, in 50s-60s film noir style with some maze like rooms.
Graphics
I mean the graphics are not great, but they are okayish-good, they are fitting to the game,
there's not really much more that can be said.
Gameplay
You have to actually keep going and figure things out yourself, what was annoying in the start got really nice while playing for a while, it's not for every player tho. The levels will change and the enemy KI will swap it's pattern a bit and get a little more difficult every level.
There are some puzzles which are often too easy, except one that took some time and was really nice to figure out myself.

Good
+ Amazing Storytelling
+ Good character&story development
+ Not much guideline
+ Ambiente / Setting
Bad
- Repetitive Voicelines
- Not much of a challenge in puzzles
- Repetitive Gameplay
Price, Endword & Recommendation
I bought it on sale for less than 2 Bucks ( 90% off ca. ) which is totally worth it.
When i look at the normal price which is currently at around 20 Bucks, i say wait till it goes on sale, even if it's a small % sale, just go for it. This game has alot in it and i would buy it again.