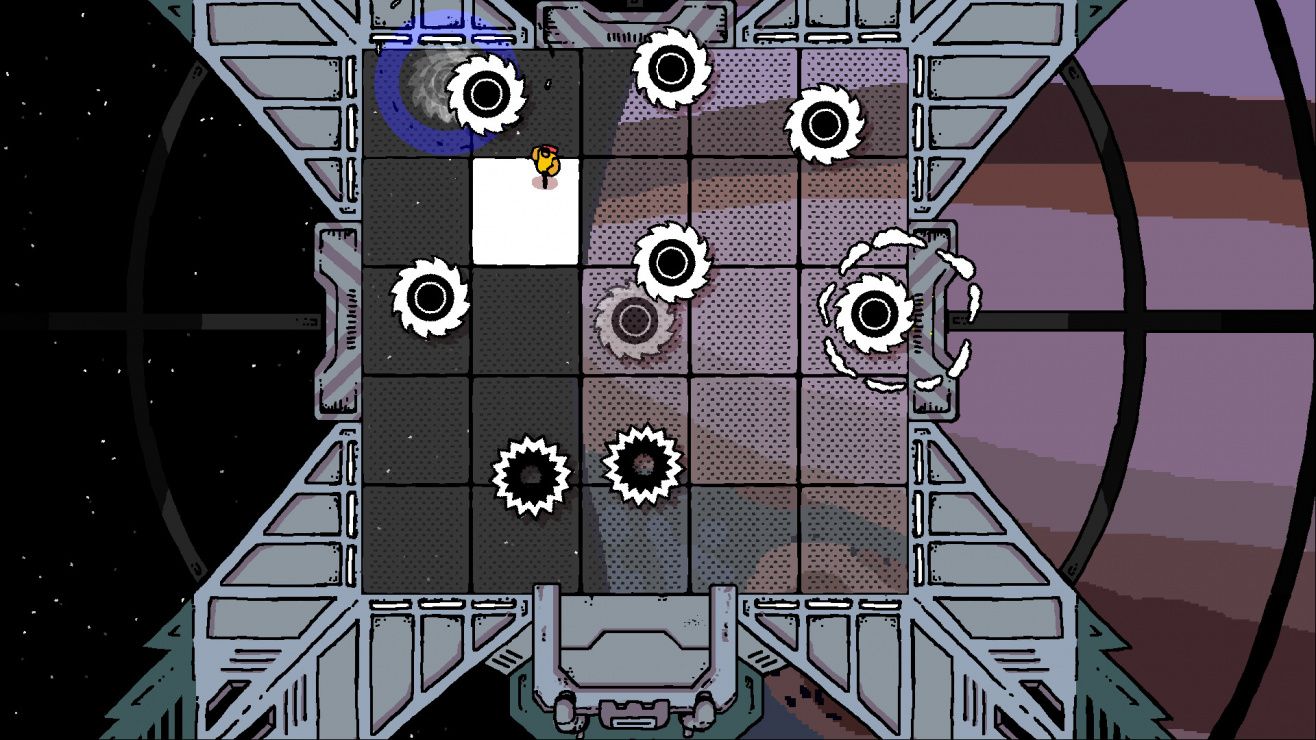 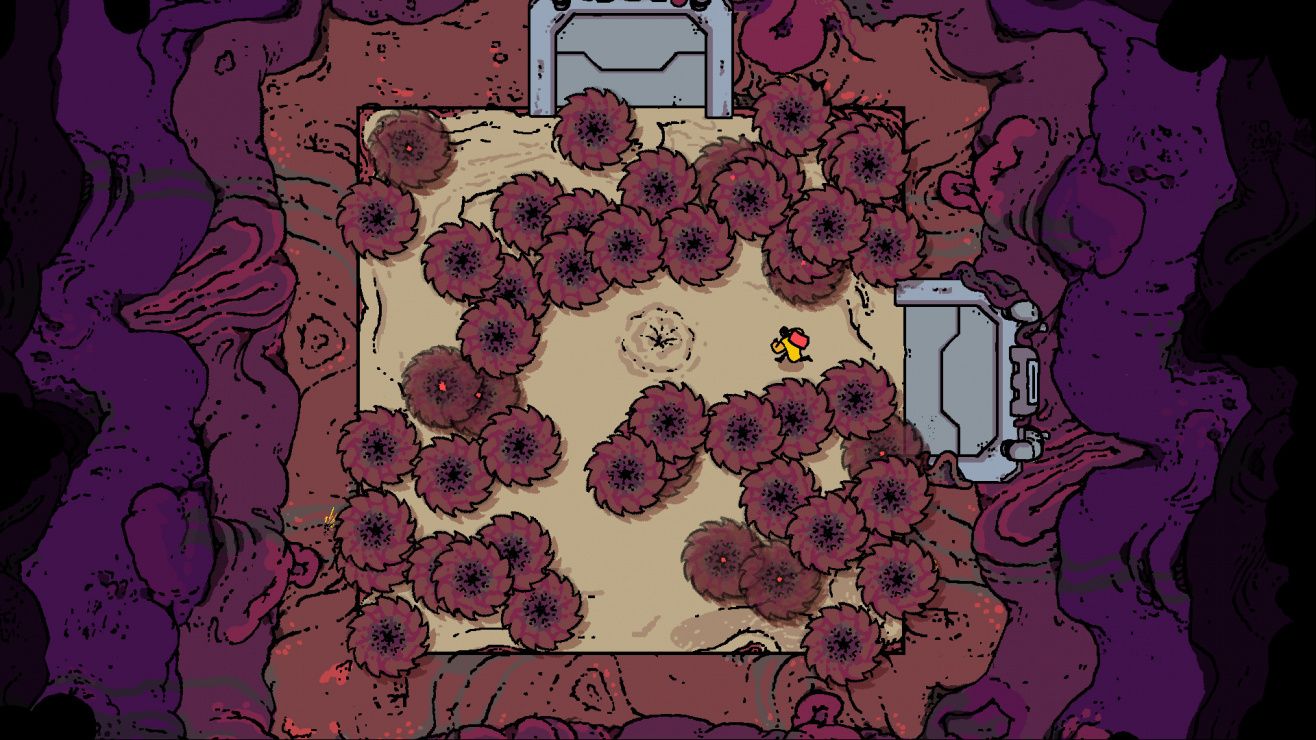 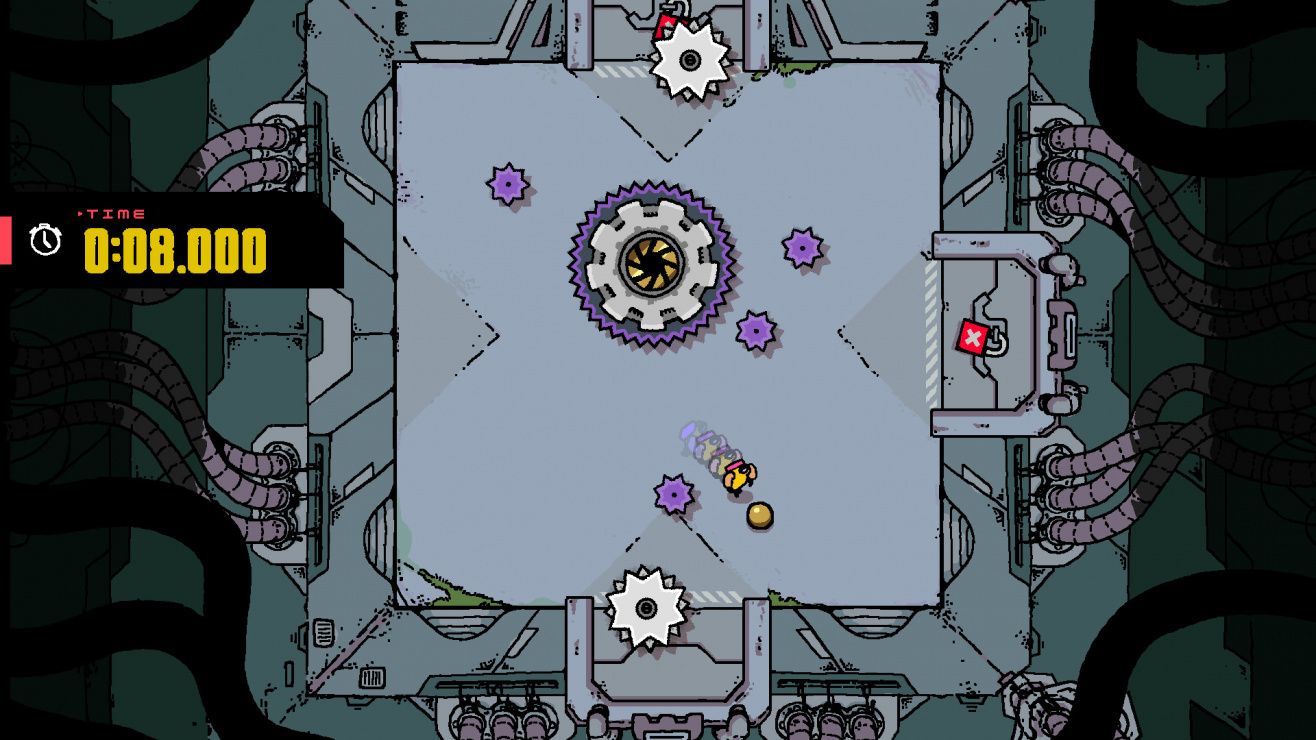 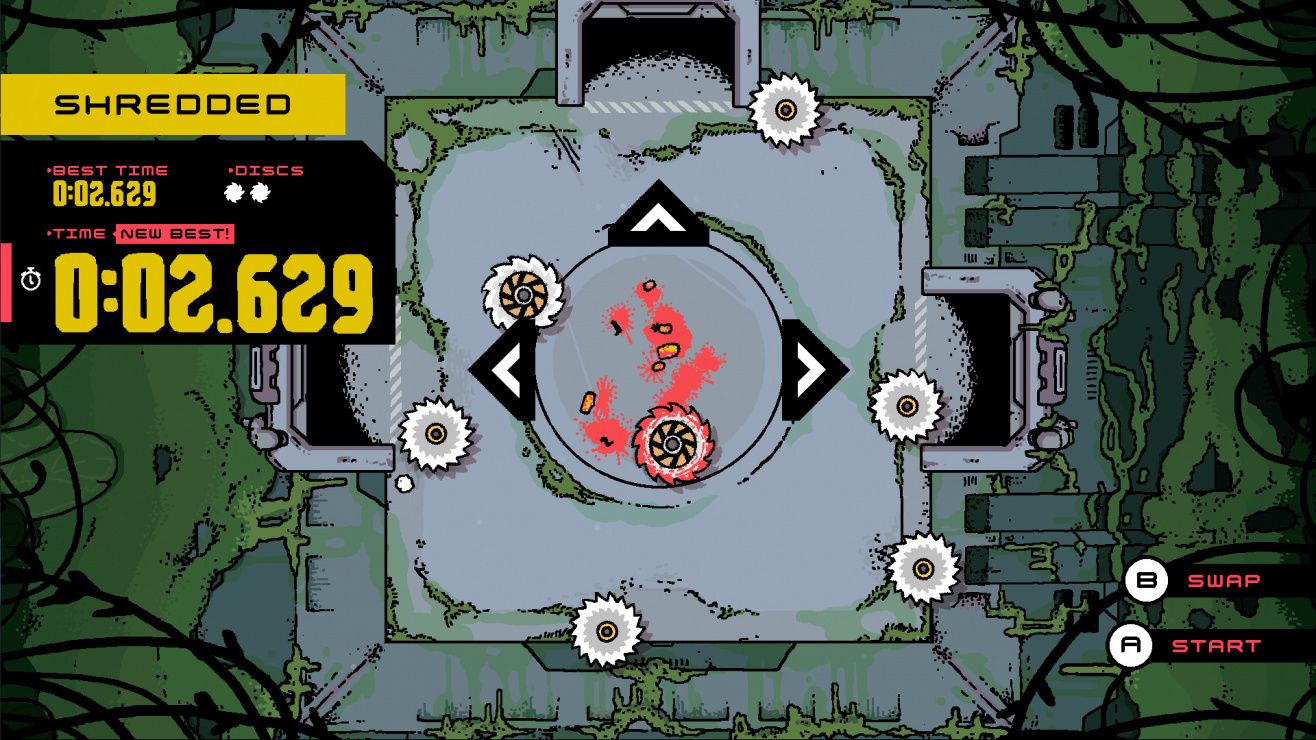 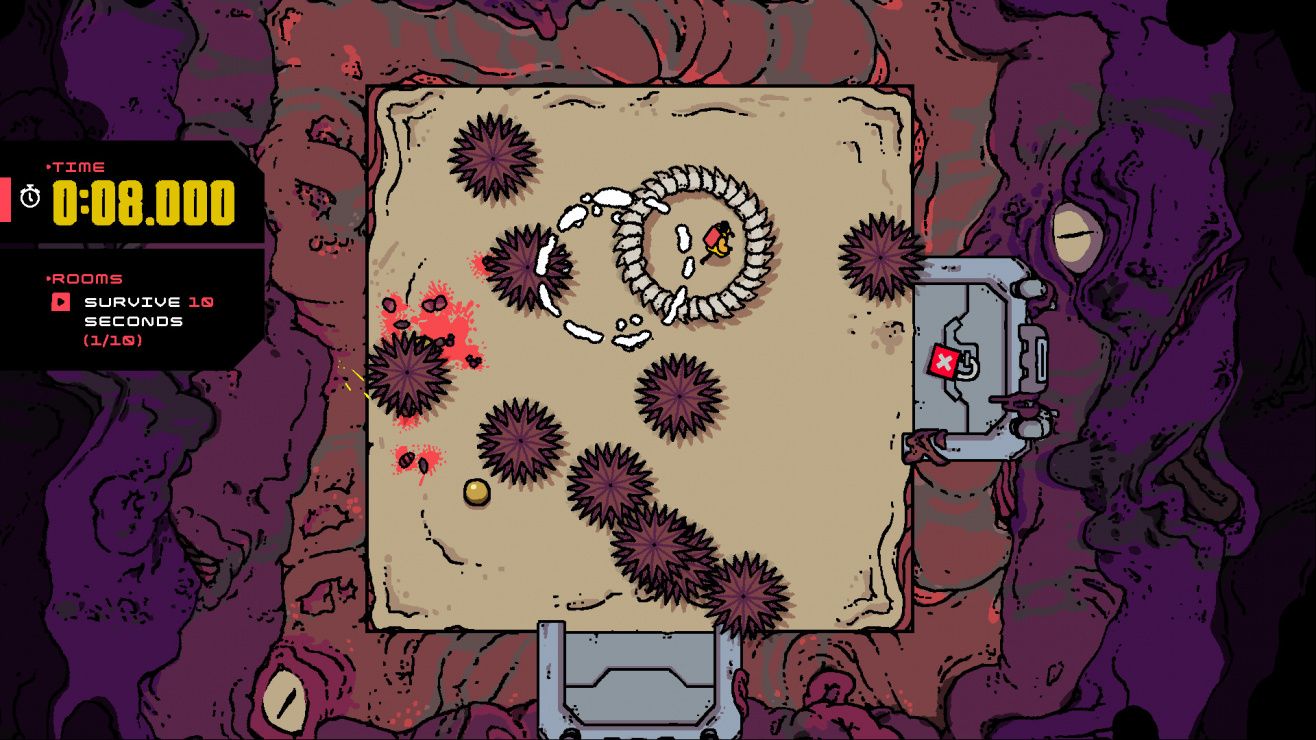 PC Steam action indie adventure singleplayer violent retro gore difficult
Are you ready to get sliced in half? The year is 2089 and a giant disc has appeared in orbit of Jupiter. Step into the oversized space suit of a brave scientist and explore this sprawling intergalactic slaughterhouse. Explore the expansive orbiting disc ship, moving room to room surviving and completing increasingly complex goals set forth. Use unlocked abilities to outmaneuver dozens of different disc types while solving mysterious puzzles. And remember: what kills you only makes you stronger. Disc Room is a collaboration between Kitty Calis, Jan Willem Nijman, Terri Vellmann and Doseone.
Share Share Share
Promote for 50G

A good game, but not a great one. For most of the main campaign, it executes its novel concept quite well: you are exploring a mysterious BDO (Big Dumb Object) populated with 50+ varieties of intelligent saw blades that each want to make hamburger of you, and the BDO keeps resurrecting you so it can teach and toy with you further. Each blade has its own pattern and tendencies -- but they spawn randomly. In the later third of the game, these malicious homing bastards appear so thickly that you begin to rely on RNG as much as your own skill -- and in the post-game, which unfortunately contains additional story points, the density of the blade distribution becomes so positively absurd that you are at the complete mercy of RNG, your only hope being that, in the rare instances you area able to hit a favorable distribution, you will be playing at your very, very best.
An interesting arcade game, but a deeply flawed one that I have zero desire to go achievement hunting in. Buy only on a sale.

Games that involve dying a lot usually aren’t my thing. It always feels like a sting that just won’t go away even after playing many classics like Super Meat Boy, Celeste, and even another Devolver gem, Katana Zero. Disc Room, for some reason, may be the first game where I didn’t feel it nearly as much. Maybe it was the nature of the progression system or the fact that you could just go to a different room any time, but I rarely found myself too frustrated with all the deaths. That being said, there was no shortage of deaths.
Abbreviated Review:
A World of Blades
The premise of Disc Room is very straightforward. An alien ship shows up around Jupiter and a bunch of scientists goes to check it out. Despite it being an obvious horrible death trap, you head in there anyway and proceed to get chopped up in room after room filled with spinning death blades. That’s essentially the whole story in a nutshell, but of course, some strange things happen in the process. I won’t spoil too much of the story here, but the gist of it is that there’s another scientist on their own little adventure as well. Also, some weird rooms have mysterious contexts as well. Overall though, I don’t necessarily think it’s the allure of the game.
Engaging in the Nightmare
The fun of Disc Room is mostly just in the gameplay alone. The bulk of what you’ll be doing in any of the many rooms is dodging the dozens of different types of spinning saw blades that bounce around each. It’s very simple, but the variety of situations lends itself to something that maintains its excitement the whole time. Within this process, your survival time is also directly compared to what your friends and the developers achieved. Since I’m the only one on my friends list to have purchased this game, I’m only competing with the developers, but it’s still a great motivator. It would be nice to have the option to include online players as well, though.
Thankfully, you’re not only relegated to just running around to survive. There are special abilities that can be unlocked that allow you to stave off death just a little longer. The first one, dash, is the one I used the most. It simply gives you a small burst of speed and allows you to clip through any discs while it's active. It’s fairly limited, but can be extremely helpful getting out of otherwise unwinnable positions. The others include things like temporarily slowing the environment around you, cloning yourself to have several simultaneous characters at once, and temporarily deflecting any discs nearby. Each has its strengths and weaknesses and works better on some levels than others. It’s up to you to determine which to use on each.
One of the more interesting things about progressing through the game is that it’s not all about surviving. A significant part of progression is tied to death. Every level has several discs with unique properties and designs. Altogether these dozens of discs provide most of the variety for the game, and they’re also listed on a checklist marked off each time one kills you. Some of the rooms in the game are locked off until you are killed by enough of these various deadly saw blades.
Intentionally and Unintentionally Speedrunning
To complete the necessary levels to get to the credits of Disc Room, you don’t need that much time. It probably took me somewhere around 90 minutes. However, the game’s small but odd story isn’t complete. You also have to venture backward through the levels on hard mode to truly finish it. For me, this is probably never going to happen. I’ve tried many times but I am thoroughly stalled. It seems like there’s so much chaos in these “hard mode” levels that you need just as much (or more) luck than skill to succeed.
It also seems like Disc Room was designed for speedrunners. The game has a challenge list that features one for completing the game in 15 minutes. It has a built-in speed running timer as well. Other challenges have players trying to die as little as possible and playing the game at 200% speed. This is neat stuff and all, but stuff that will never really appeal to me.
So what I ended up with is a game that has an enjoyable 90 minute set of gameplay that doesn’t really offer me much in addition. It does have some accessibility options similar to Celeste where you can slow down the game and make it easy to complete, but it feels like a waste to bother with those. The one I did use was unlocking the rest of the cutscenes so I could see the real final ending – which still wasn’t all that incredible.
Cut open your wallet or not?
If you’re not interested in speedrunning or the post-ending extra-difficult gameplay, Disc Room may not be for you. At least not at its base price. I do think the game is worth experiencing if you can get it cheap enough, though. The game just didn’t stick with me as much as some other short indie games. As a fan of short games, one of the things I value in them is making an impact in such a limited time. I think if I was interested in the challenges or could enjoy the speedrunning aspects more, it might have that impact. However, as it stands it seems like it’s only slightly above average.
If you'd like to see more of my reviews, check out my curator page here: Endyo’s Indies, Abbreviated Reviews, and online at BagoGames

💿Cool indie game, simple concept but well executed.
⚙️Nice 2D graphics and good gameplay.
☠️Prepare to get sliced over and over again.
PROS:
+It's fun.
+It's not too frustrating.
+You can tweak the difficulty as you want.
+It looks great with a nice "memey" cartoon style.
+The controls are precise and responsive.
+The soundtrack is nice.
+Different abilities to suit your playstyle.
CONS:
-Framerate is limited at 43fps.
-Can become repetitive after few hours.
-Not enough content IMO.
-If you don't like sawblades and discs you will not like this game.
Rating 6/10.

This is one of those nearly flawless games that you can hone your skills at. The closest comparison I can make is Super Meat Boy or another challenging platformer. The satisfaction in playing this game comes primarily from becoming better as a player. A few of the levels are more puzzle-like, providing a breather from the intense action.
Disc Room is a variation on the bullet hell genre. However, because you are dodging large gears instead of point-like bullets, it becomes an entirely different beast. It has a fresh feel. Gameplay is snappy and tight. (There were a few kinks but the developers ironed these out in the first few patches.) For context, the game expects 10 seconds of survival in a room to establish competency and 20 seconds for mastery. So yes, it's a very hard game, and you will get very good at it.
I want to say that the soundtrack and sound design elevates this game from good to great. A game like this would be unbearable without a good soundtrack, and Disc Room has a great one. Also, you'll eventually notice that when you have a near-miss with a gear, the music will warp and become a bit shrill. This tiny feature added a lot for me, and I appreciate the attention to detail.
If you are a fan of action/arcade games at all, please do yourself a favor and pick up Disc Room. It's all the open nerve action of Super Hexagon with the satisfying progression of a platformer or metroidvania. The one thing I would wish for is more levels. Any sequel would be an instant-buy for me.