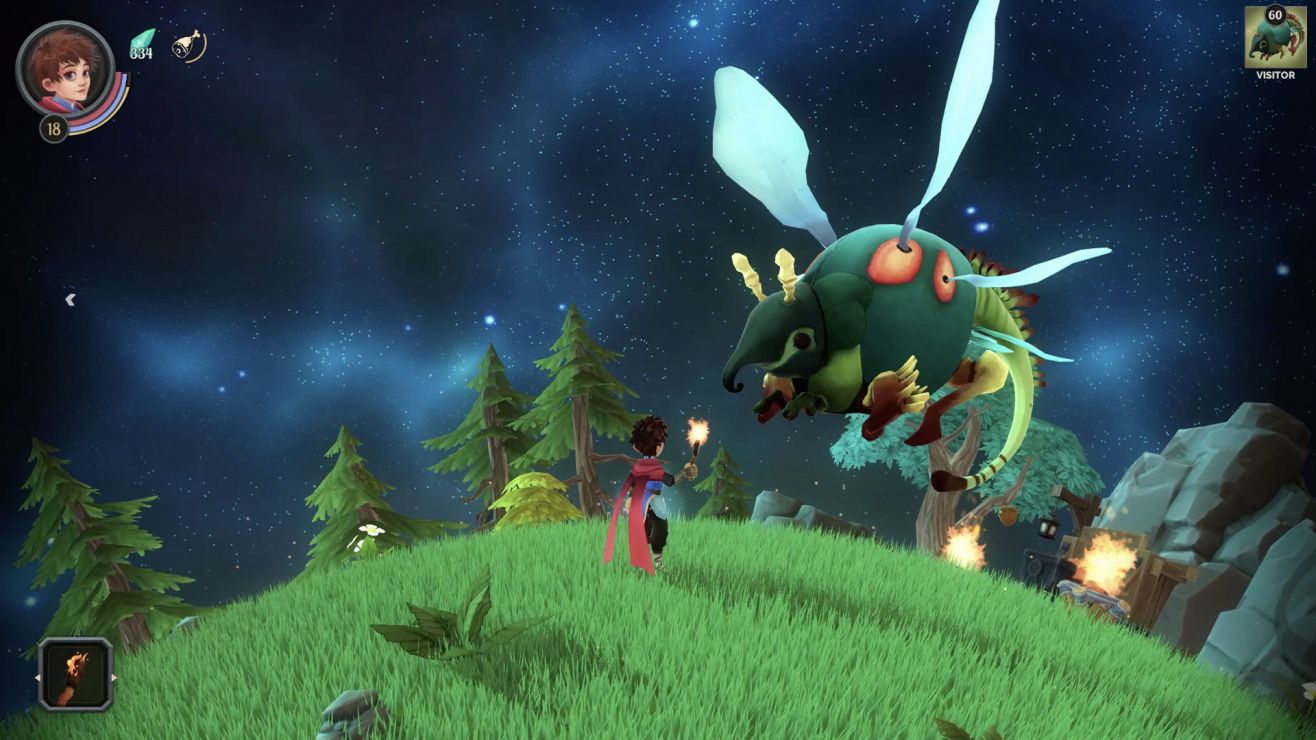 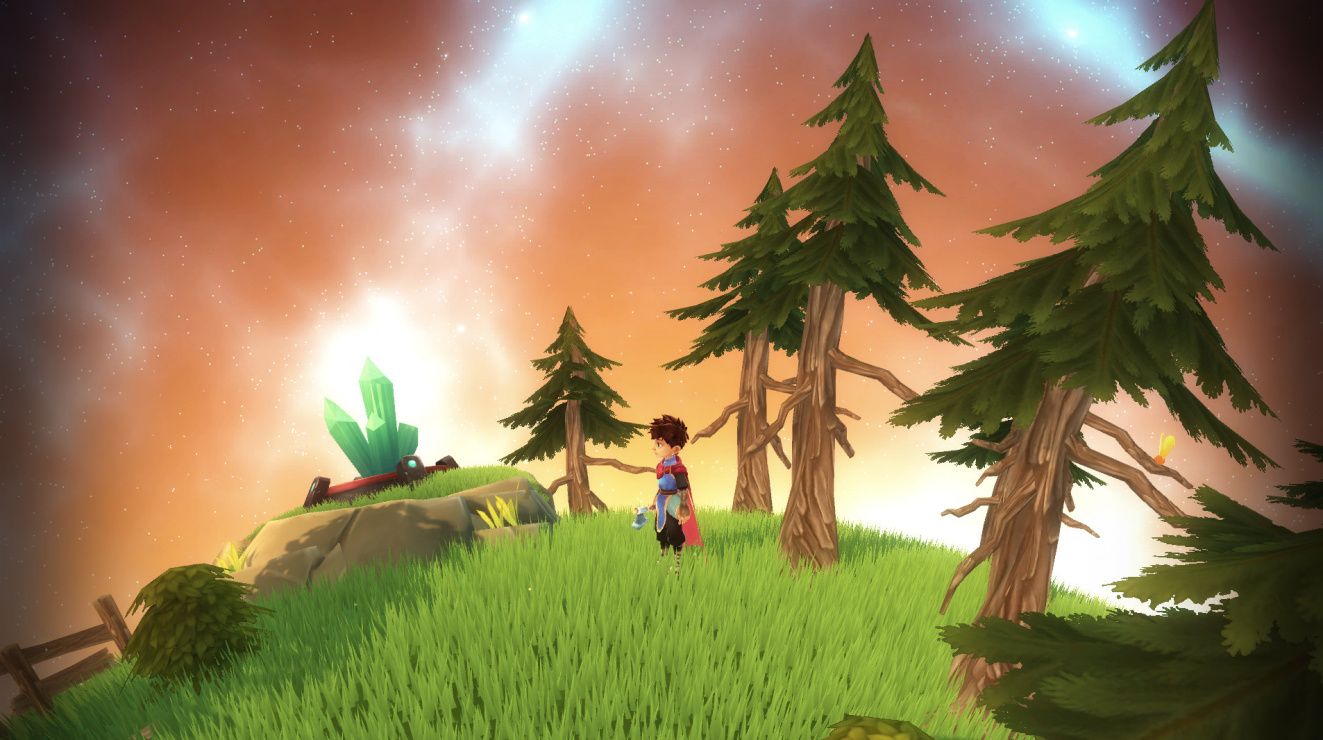 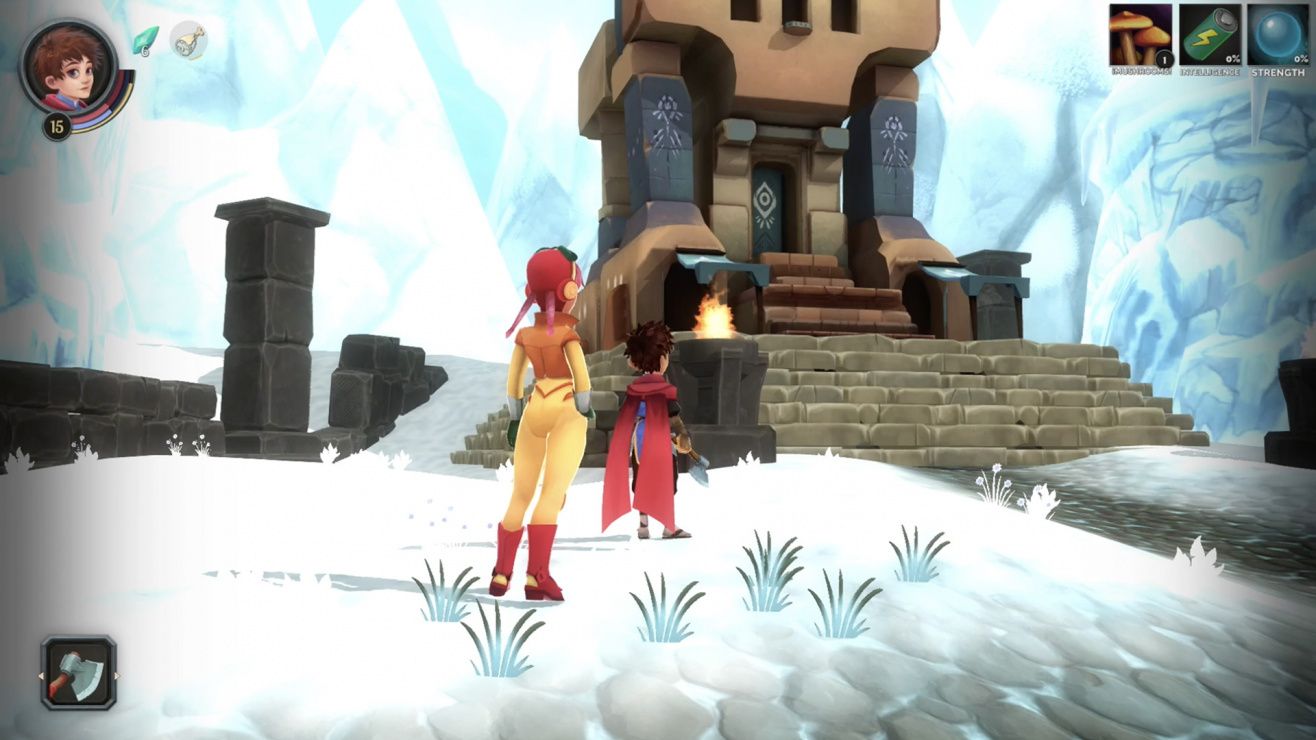 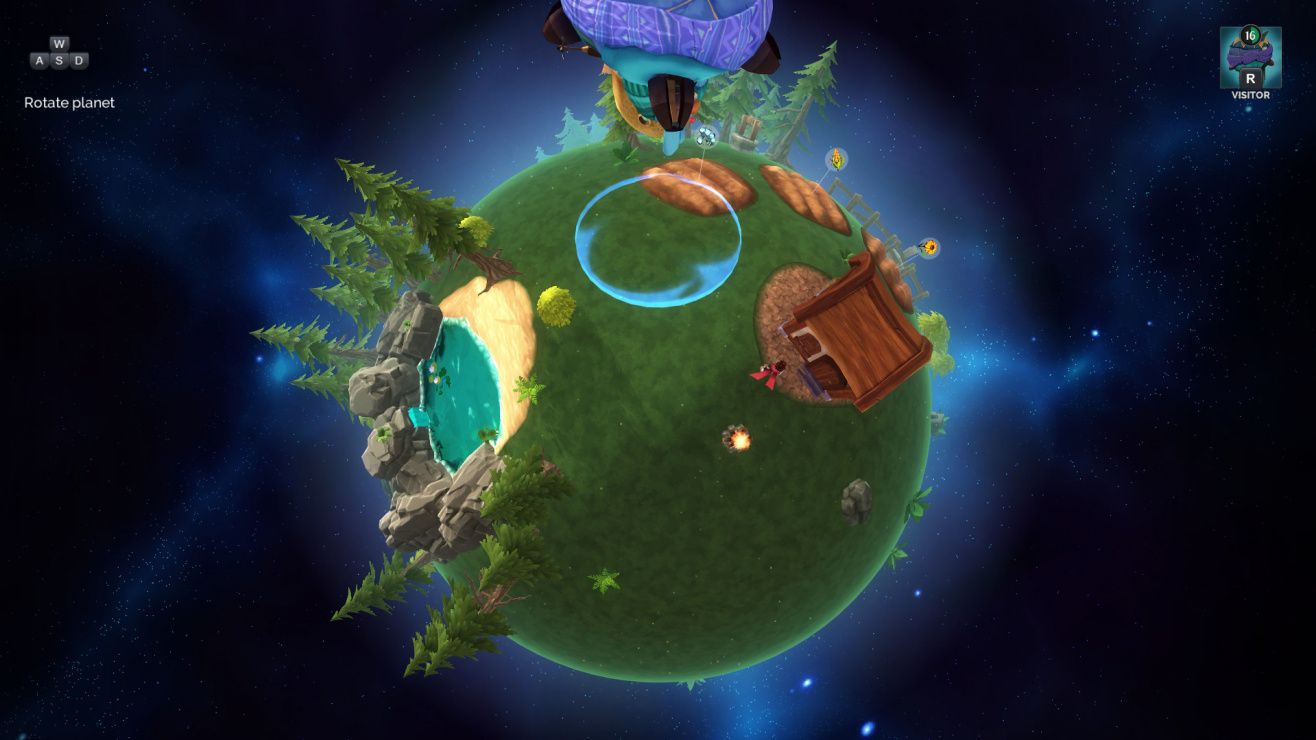 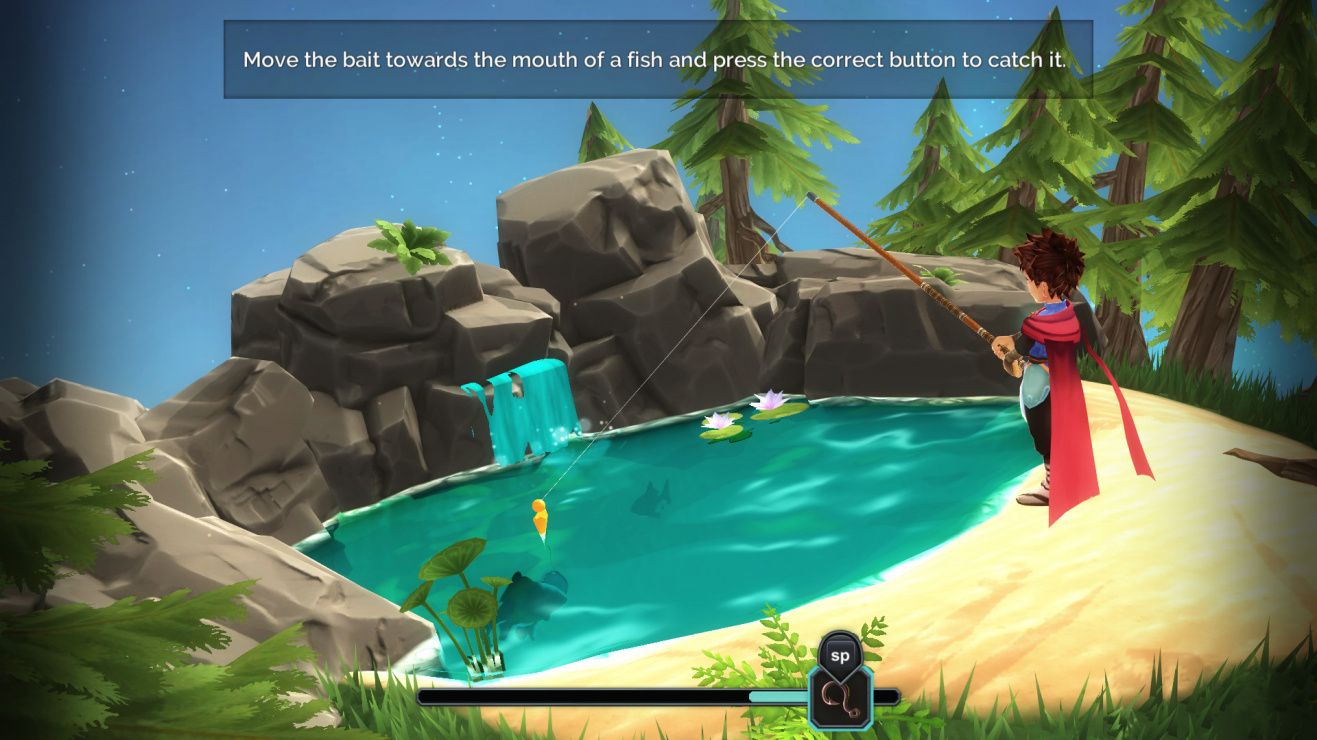 PC Steam indie adventure rpg casual simulation role-playing family
Deiland is a single-player adventure RPG with several sandbox elements, such as farming, crafting, and building. Put on the mantle of the Little Prince of Deiland and rule over your own planet! Tend Deiland Your planet is your home, turn it into a unique and special place. Improve your skills, craft tools, cook delicious food, brew potions, and create many more items that you can manage and trade. Enjoy the story 12 available characters and over 100 quests. Your little planet will attract lots of neighboring merchants wishing to trade materials and rare ingredients. Play and relax Smooth and cute graphics as well as a relaxing soundtrack to ease up the bustling everyday routine. Experience the nature's versatility in the form of storms, hurricane winds, Aurora Borealis, meteor showers, and shooting stars.
Share Share Share
Promote for 50G

Small note regarding the required 3rd-Party account :
Seeing that this was received poorly they decided to remove this and made an apology
👪Player Bases:
☑ Kids.
☑ Everyone.
☐ Mature.
☑ Casual Players.
☐ Pro players.
⛺Graphics:
☐ Potato.
☐ Bad.
☐ Average.
☑ Good.
👉 The visuals are pretty, it's colourful and the sky is also nice
It also has a very nice artstyle
☐ Beautiful.
☐ Masterpiece.
🎮Gameplay:
☐ Terrible.
☐ Bad.
☑ Average.
👉 The farming part is enjoyable and simple, you can cultivate a handful of different crops, fish, plant trees, grow flowers and much more! Customize your planet with plants and structures you can build, unlock new features as you progress in the game and upgrade your tools.
Then you can trade with friendly npcs which will also give you tasks to do like preparing meals, brew potions, collect minerals etc.
The one big downside though is the combat system which I found very dull (except maybe for the boss fight), enemies will slowly come at you and you'll receive damage when they touch you, just like a Minecraft zombie. It was terribly easy, I didn't need to use any special potions except for the healing potion.
☐ Good.
☐ Fantastic.
💀Difficulty:
☑ Easy.
☐ Medium.
☐ Hard.
☐ Very Hard.
☐ Death March.
⌛Game length:
☐ Really Short. ( 0 - 3 hours)
☐ Short. ( 3 - 8 hours)
☑ Medium. ( 8 - 20 hours)
👉 ~15h to complete the story, finish every given tasks and a few extra hours to unlock the remaining achievements.
☐ Long. ( 20 - 40 hours)
☐ Very Long ( 40 - 60 hours)
☐ Extremely Long (60+ hours)
☐ Endless
📖Story:
☐ It Doesn't Have One.
☐ Horrible.
☐ Bad.
☑ Average.
👉 The characters are cute, the interaction you have with the npcs (and between them) are funny, sometimes a bit goofy which also adds to the fun.
The overall story is also interesting, it's the type of fairy tale you would tell a kid before going to bed. But it feels unfinished, maybe there will be a sequel?
☐ Good.
☐ Fantastic.
🎬Cinematic/Art:
☑ It Doesn't Have.
🎵Music/Sound:
☐ Horrible.
☑ Bad.
👉 At first the soundtrack was okay but there are so few it becomes repetitive and boring. The sound effects where also really bad, the same npc and monster noises.
☐ Average.
☐ Good.
☐ Amazing.
💸Price:
☐ Full Price.
☑ Wait For Sale.
☐ Refund It If You Can.
☐ Don't Buy It.
☐ Free.
🚀Requirements:
☑ Minimum.
☐ Medium.
☐ Fast.
☐ Super Computer.
🐞Bugs:
☐ Game Itself Is One Big BUG.
☐ Game Breaking Bugs.
☑ Lots of bugs.
👉 Visitors won't land no matter where you place them : Fixed by restarting the game
NPCs from Ankora won't interact with you : Fixed by returning to Deiland then going back to Ankora
After trading with an NPC, they will keep saying that you still haven't done your last chore yet even though you did : You will have to wait for them to return
Flower seeds aren't labeled correctly when trying to plant them, they are labeled correctly in the inventory though
👉 For the COOK|CHEF|MASTER CHEF|ALCHEMIST|MASTER ALCHEMIST| achievements you have to craft them one by one. If you craft 30 items at the same time, it will only count as 1 for the achievement.
For the SHEPERD achievement, the game counts the number of transactions meaning that if you buy 4 sheep at once you won't unlock the achievement : fixed by selling and rebuying a Sheep.
☐ Few Bugs.
☐ Nothing.
📝Final:
☐ Terrible.
☐ Bad.
☐ Average.
☑ Good.
☐ Great.
☐ Fantastic.
🌐Others:
Multiplayer: ☐
Singleplayer: ☑
💯Final Score:
6.5/10

This is a rough one. You have this buggy mess with poorly balanced progression, tedious grinding, awful combat, clearly missing/work-in-progress content and a story that seems like a first draft and in need of several rewrites. The only redeeming quality this game has is the art style coupled with charming atmosphere.
Is that enough to give this game a shot? It was for me, but just barely. Seeing as the state of the game is equivalent to something between alpha/beta, I'd recommend waiting for significantly high discount.
5.0/10

Fun, easy, time-consuming, cute game. Definitely not worth full price, but with a 90% discount or for free - it's a catch.
+ Loved the relaxing atmosphere and artwork.
+ Short grinding game for all the perfectionists out there.
+ Since I played with controller I didn't have any issues with controls.
- The Story (if there was one) is definitely a mess. It's a 5 minute story which you can predict from the start of the game.
- Some quests should have an explanation on how to complete them. I managed to do them by accident.
- Little more customisation on the planet would be pretty cool.
- Stuff dropped on ground (wood, berries, seeds, etc.) disappears in 2 seconds, just - annoying.
- Speaking of annoying things - chickens.
Overall, if you like perfecting games with a little grind - this one is short with relaxing atmosphere.
~17 hours well spent, but wouldn't play it again.

Like this Review? Follow The Cpt Froggy Club Curator Page for plenty more!
Deiland
~~~~~~~
Deiland is a neat new single-player adventure RPG with a touch of farming simulator mixed in. Deiland’s main selling point is its kid-friendly nature and its rather wholesome farming sim.
Although nowhere near as detailed as other farming sims in the market, Deiland presents its own sense of casual charm to the genre with its casual nature.
Right off the bat, I was a bit skeptical about the game’s overall gameplay and the size of its playable area, but I soon came to see how well-managed things can be as I started to progress in-game.
The playable area is tiny, but the game allows me to manage a lot of things which allowed me to be more creative with my environment (although I did feel the need for more micromanagement).
Plot: Arco, a young little prince, is put on the mantle of Deiland, a tiny planet in a far corner of the galaxy.
Arco is entrusted with the ruling and well-being of Deiland. Here he must live to prosper and fulfill his destiny.
Knowing little about ruling a planet and being of the land, Arco must learn to live, grow, craft, and build his land from scratch. Lucky Arco gets visitors like Mun, an intergalactic explorer, who teaches Arco some neat tricks in the form of chores.
Completing one chore at a time, Arco’s new planet starts looking like a wonderland.
Gameplay: As I mentioned earlier, I was a bit skeptical about the game’s playable area, but as I started cleaning and weeding out all the unnecessary trees, rocks, and other foliage the planet started to look like more of a decent ground for farming and cultivation.
Being essentially a casual farming game, Deiland still holds up quite a few simulator-like features, such as a daily stamina bar, certain items only being cultivated in certain seasons, and the ground needing to be cleaned and prepared in order to be worked on, etc.
As I started working on my chores, I was a bit shocked that there was such a big gap of time from the moment of planting seeds to getting the goods!! I was hoping for a bit more of a fast-paced sim experience.
Progressing through the game, more and more NPC characters started to appear, such as Mun. These characters started teaching new tricks and unlocking more and more game features in the form of chores and not actual quests, which seemed a bit odd.
As more and more features were unlocked, I was able to shape my planet into more a functional, livable land, with a well for clean drinking water, a proper house for shelter, etc.
The overall crafter and creating system seemed perfect for the game with its simple crafting system; just collect the needed items to create something new and hit space. Perfect for a casual farming sim like this, although I still couldn’t get over the waiting time with the plant growth! A faster planting and harvesting system would have been much more appropriate.
Inventory plays an important role in these types of games and this one is no different, although it’s much, much more simplified than anything I have seen before.
A large quantity can be stored, bought, and sold; it’s just perfect for a game of this caliber, but I did feel the need for a little something more with the inventory system.
The world can be viewed in two different perspectives: a third person view and a 3D over-the-top view of the planet, each with its own unique set of uses. The third-person perspective is for using the playable character with its day-to-day chores and the 3D view of the planet can be used to manipulate the planet, weather, where visitors can land, etc.
Combat: Apparently there is a combat system in place. I was like, okay this could be fun, and from time to time, creatures and critters did appear on the planet and you would be tasked to kill them. Which was all okay until I hit the attack button! The combat system is dreadful; slow, clunky and totally unnecessary for this game. Even the animations are almost the same as the others in-game! The combat system felt like a total last-minute add-on.
World design: A charming little world design with a proper day and night cycle. Colorful and bright, the world design complements the gameplay and story nicely.
Positives:
+ Decent plot
+ Fun casual farming sim
+ Simplistic inventory system
+ Difficulty-appropriate crafting and cultivating
+ Kid-friendly
+ Relaxing atmosphere
Negatives:
- Short story, could’ve been extended
- Needs customization options
- The combat system felt out of place
- The quest should’ve been based more on exploration
- The harvest process should be more fast-paced.
Help the young prince build his kingdom. Grow, cultivate, and built the planet into a paradise.
7/10
Key provided by the developer/publisher for review purposes. Any opinions expressed are entirely my own!
READ EPIC REVIEWS FROM “THE CPT FROGGY” AND MATES, UP NOW ON ZEEPOND, THE HOME OF THE ALMIGHTY FROG!
FOLLOW THE CPT FROGGY CURATOR PAGE HERE

3 hours in, and love it. While this game may become repetitive, it has a very Stardew Valley type vibe to it. Great Xbox 1 Controls and a relaxing casual game.
100% Achievements in 15 Hours. Not a large story base to it nor things to do, but nice graphics and a very casual relaxing game to enjoy. Recommended for a single play through.

They reverted the third party launcher update, also seems the controller works too now for some reason.

Loved it! The way that the game lets you do anything in the small planet that you own, from planting to fishing to even raising sheep!! There were a few bugs that appeared once in a while, but quitting the game to the main menu and continuing helped navigate around those. All in all, a good game with good graphics which lets you enjoy everything you do.
P.S. Great for achievement hunters as you can get all the achievements in one play through.