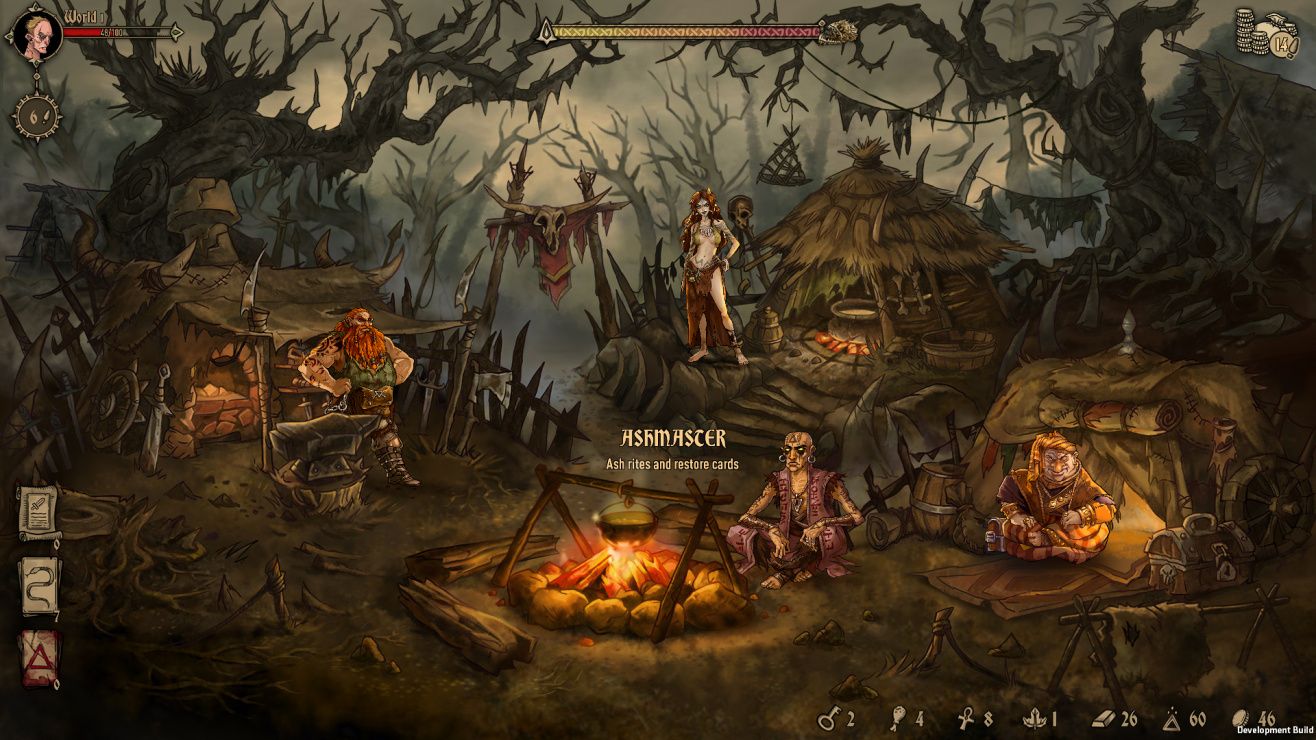 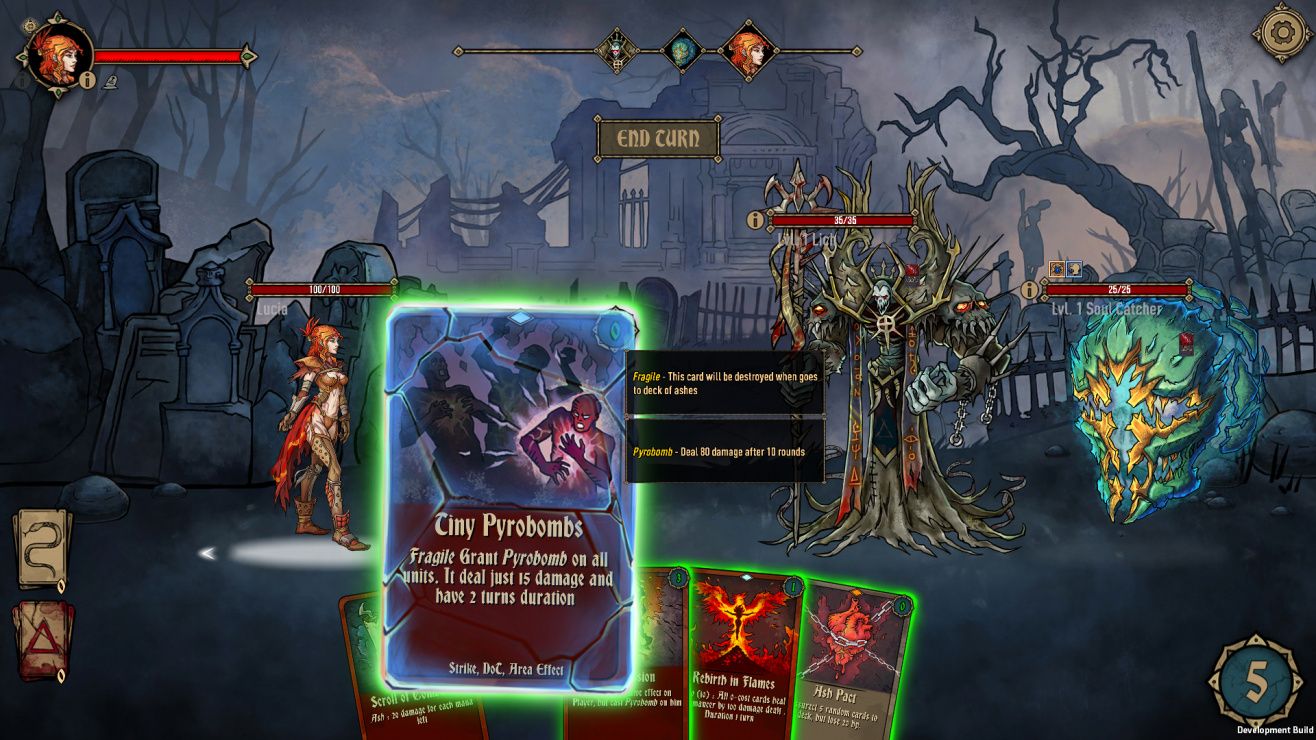 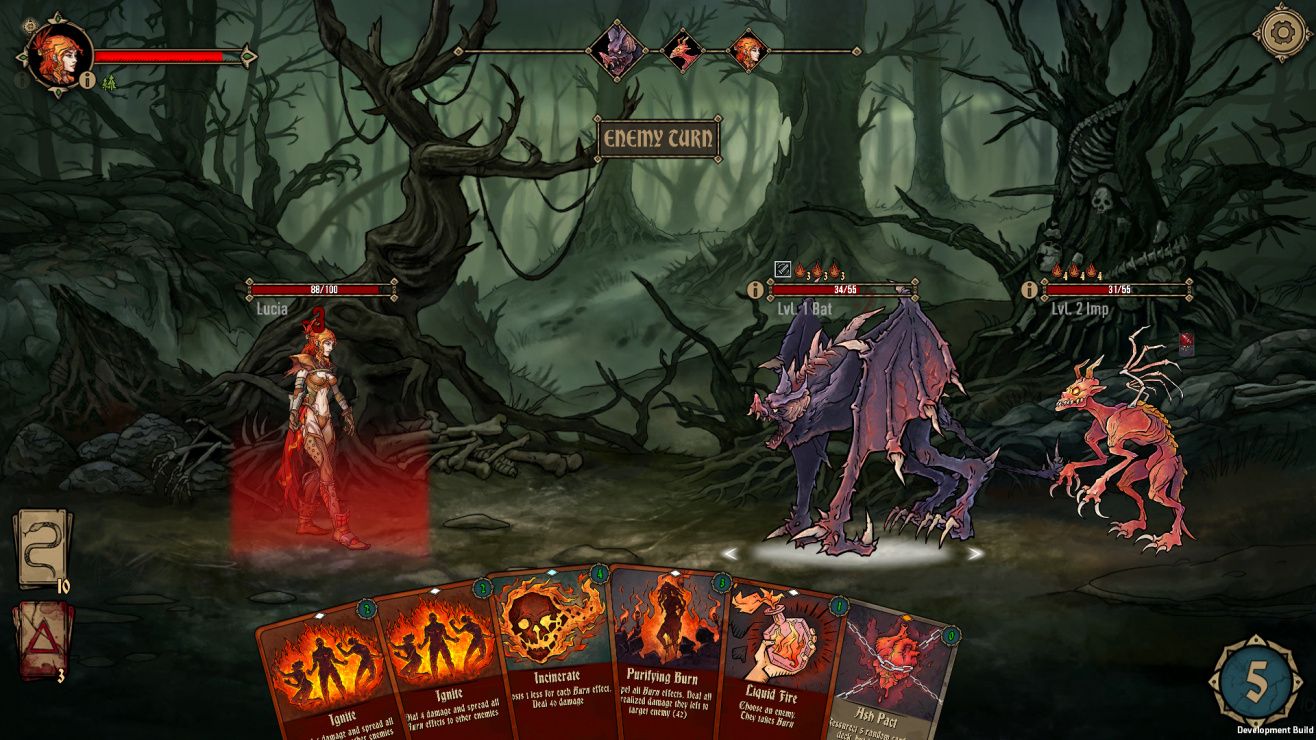 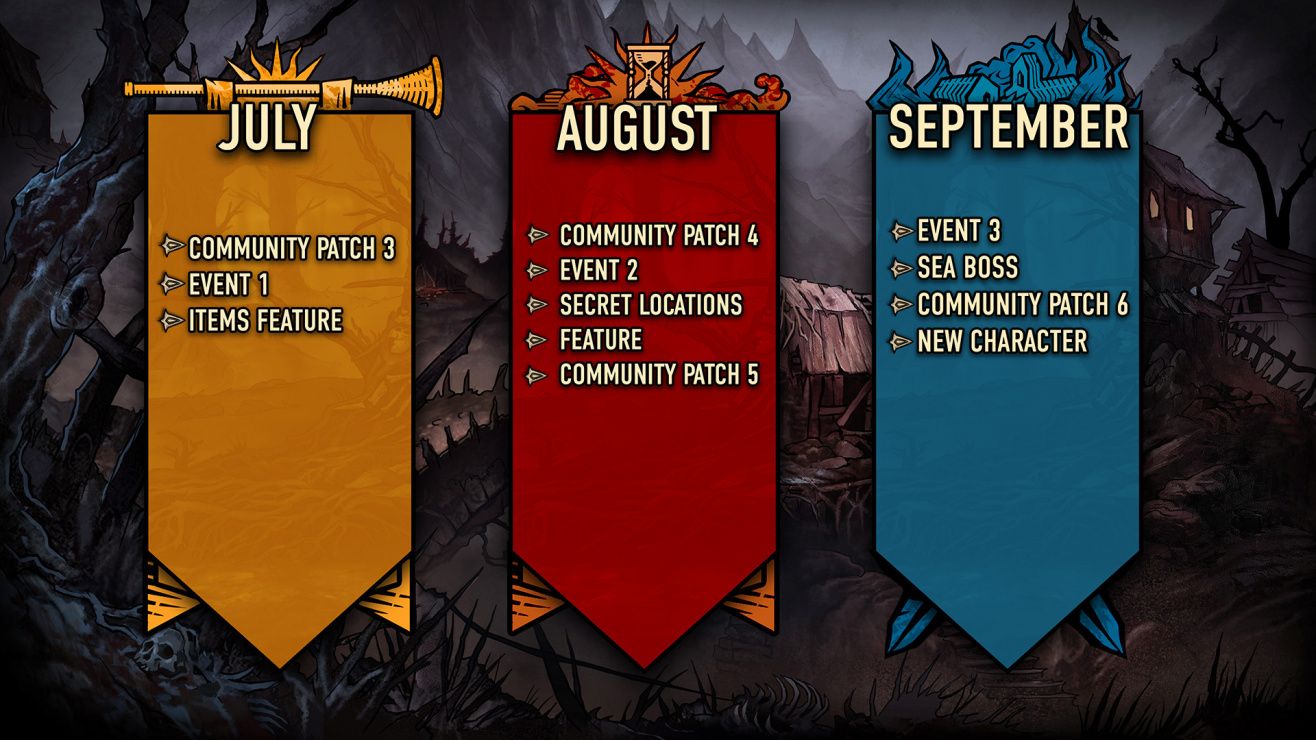 card game indie rpg singleplayer strategy
"The Outcasts brought Ash Curse upon us all, and they are the only ones who can lift it." - Ash Master. Deck of Ashes is an adventure game with tactical card combat. One character at a time, lead the cast of antiheroes on a quest for redemption. Explore the cursed fantasy world and hunt down powerful cards. Put your survival and resource management skills to the test when upgrading your Camp of allies. The choices that drive your journey - where to go, which resource to collect, which risk to take, and which card to craft - are the difference between success and untimely demise. Features Creative deck-building - collect combat cards that fit your unique playstyle and crush the enemy! Unique hand-drawn eerie art style. Dynamic dark fantasy world - travel through a procedurally generated, changing world in search for cards, supplies and glory! Various biomes that harbour different monster classes - each biome affects the gameplay and offers a unique set of opponents! Survival and resource management - you have limited opportunities to restore health or spent cards, so use them wisely! Camp - strategically improve your base depending on your style of play. Permadeath - unless you use the help of dark magic, then when you die, you die for good.
Share Share Share
Promote for 50G

If you're considering this game, you're one of three groups. Either you've never played a deck building roguelike before, you've played Slay the Spire and it wasn't your thing, or you've played a *lot* of Slay the Spire, and you want something new.
If you haven't played a game like Slay the Spire before...I suggest checking out Slay the Spire. This game is not one of the friendliest to new players, and that one is much more polished.
If you disliked Slay the Spire, this game isn't for you.
If you *love* Slay the Spire...there's a lot here to like. The game replaces relic hunting with hunting for resources (gold, ash, and upgrade resources), and uses an interesting system where you have to pay to recover cards from your discard pile. This makes healing effects and recovery effects much, much more important, and makes using an extremely thin deck have an added cost to it compared to larger decks. As well, the characters are interesting, and throw in their own twists that keep things interesting.
Be warned, the game is *long*, per loop. I don't think it's an exaggeration to say that a skilled StS runner could get 3 loops in in the time it'd take a skilled DoA runner to get in one. But if you stick with this game, there's a lot here to enjoy, and hopefully they'll continue refining this game further.
Ultimately, I recommend this game, as I *am* in that third camp, and this is one of the better card based roguelikes out there.

I've never left a review before, but this game deserves it. I see it has mixed reviews at this time and I understand some of the pain points that reflect the early-access-still-in-development status that have turned people off.
However, I think this is the best RLDB (Roguelite Deckbuilder) currently in Early Access on Steam (Or, at least, it is tied with Fate Hunters). It is already worth the money you'd be spending on it, as long as you have the patience to spend a few hours getting into it. And if you've played StS, a similar deckbuilder with long term campaigns, you really shouldn't be afraid of putting in those hours because you definitely have the patience for the long term reward that sort of game gives.
I got turned off and kept trying to get back into the game at first, because it starts off slow and there's a bit of a learning curve. But there is a DEEPLY satisfying play loop in this game due to its unique mechanics that give it the possibility of having enormous replayability and unique long campaigns with uncertain success, a similar feeling I'd say to that which I got from StS and FTL. I'm often running back and forth between objectives surviving on the skin of my teeth to get one more necessary resource while cringing each time I click wondering if the RNG will make the boss come and attack me a mere one click/turn before I get the resource I want (happens all the time and it's awesome and stressful in a good way).
You're under an extreme time limit before an inevitable boss fight and you absolutely do not have time to do anything and everything before that fight. You must prioritize your limited time and choose what resources to go after (and there are many, many options, cards, traits, card recipes, money, stat increases, etc etc). Unless you're on the hardest difficulty, you can survive death with a serious setback in losing resources, and STILL manage to pull off a win - I've beaten the game after several such setbacks with only 1 hit away from killing me from the final boss. That is how fantastic this game CAN be.
Downsides: The game has bugs, and some cards are severely overpowered for one of the characters. Being too easy is the worst sin an RLDB can make in my eyes. It's the reason the almost amazing (also early access RLDB) "Destiny or Fate" is nearly unplayable at this time. I know not everyone feels this way, but as a fan of darks souls type difficulty I'd rather lose too many games than win too many games. Lose too many and you might get frustrated and take a break. Win too many and you're bored and done with the game forever.
Some people seem to be complaining about the fact that you have to pay hp to get your cards back. It feels expensive and way too punishing...at first. But there are many, many ways around it and I ended up seeing it as a great mechanic that actually acts as a guard against allowing you to do some cheesy strats that would, in the end, make the game less fun. Just keep playing and you'll find the many ways around it and feel clever for having done so. Do a little calculation in your head about the price of hp per card renewed vs camp rest points per card renewed and you'll understand just why it's a great mechanic that gives you one more interesting choice in the game.
I thought the game was gonna end up too easy after playing one of the two characters Lucia and winning effortlessly multiple times in a row. Very disappointing. But...then I tried the other character, Sly and it was FUN. I could really see the fun gameplay loop and I actually lost several times just barely before I won. That's my $15 dollars right there. Sly is the man. The voice acting in the game is slightly melodramatic and nearly cringy, as are some of the lines (Although it's pretty cool that there's voice acting in there at all, I'm not really complaining about it), but the story itself is great, if simple, and I find myself really liking Sly and wanting him to succeed. It's not really necessary for that kind of story to exist in an RLDB, but it adds to the experience that it does.
Now, the reason you should forgive the bugs and the balance issues and get this game right now and support it: The Devs are extremely friendly, responsive, and have gone so far as to respond to pain points and bugs that users posted on the forum, researching them and fixing them WITHIN THE SAME DAY. I was persuaded to buy this game, as I was many others, by seeing positive comments about good and friendly and productive devs, same reason I have been persuaded to get several games. It's a really motivating thing to see, and if you also appreciate seeing Early Access actually done well, it is a good reason to go ahead and purchase this game. When it gets fully balanced and developed I feel that it has the potential to be competitive with the best RLDB's (Just my opinion, but I say this as someone who has purchased and fully played nearly every deckbuilder on steam).
Summary: Definitely worth a purchase; It feels great to get in on it now and watch and help its growth! Just be patient and give it some time to get past the learning curve and you'll get your money's worth.

A super dark fantasy deckbuilder where your deck doesn't refresh immediately, and it costs resources to do so. Has an in-depth exploration system and resource gathering. There's a pretty good amount of depth in the cards, and the setting and story are best in genre. The only downside is that the game is relatively buggy, and SUPER unbalanced because it's in Early Access. I would recommend it, but with the advice that not all strategies in the game are viable for winning, and not all characters are equal power level. (I'm looking at you Bucky)

This is a game you can tell the devs are proud of. They interact with the community and have cared about their product through the whole early access cycle. It's a deckbuilder, and there are a lot of them out there, but I think it earns it's place.
1) There are interesting character backgrounds and stories worked into the gameplay loop
2) There are unique mechanics I personally haven't seen in deckbuilders - things like spending life to cycle cards, crafting your deck off recipes you find, a mid-run changing map with individual dungeons to clear, and a few other unique features I know I'm forgetting at the moment
3) There is an alternate play mode where you can draft your starting deck instead of using the standard cards (my personal favorite)
I appreciate the dedication and desire to be "different" from the rest of the market. Every time I circle back and play a few rounds of Deck of Ashes I always end up enjoying myself.

This is a Russian game which was translated into English. The Russian version is probably more polished and localizing the game and keeping the English build up to date with the Russian one is probably too much work for them. Unfortunately this is quite apparent from spelling mistakes and some questionable card descriptions. But luckily the game's concept and Darkest Dungeon-esque theme come together to keep your interest. The actual card design doesn't hold up against the refined masterwork that is Slay the Spire, but looking forward to trying the other characters and seeing AY Games' take on the digital deckbuilding genre. They have quite a novel way of dealing with the deck and discard piles that I haven't seen in other games. Their card upgrade system is also unique and might be something that other developers will use in the future. So it's definitely worth checking out, but the fact that they're pricing themselves the same as Slay the Spire is reaching a bit. Would recommend if you have played Slay the Spire or Darkest Dungeon and you're in the market for something similar, but don't expect the same amount of polish as in those games.

Excellent card building game in the vein of dream quest, slay the spire etc. There's plenty of game here already so it doesn't really matter it's still in early access and the devs seem quite active on the boards with responses, updates etc.
Fun game, recommended.