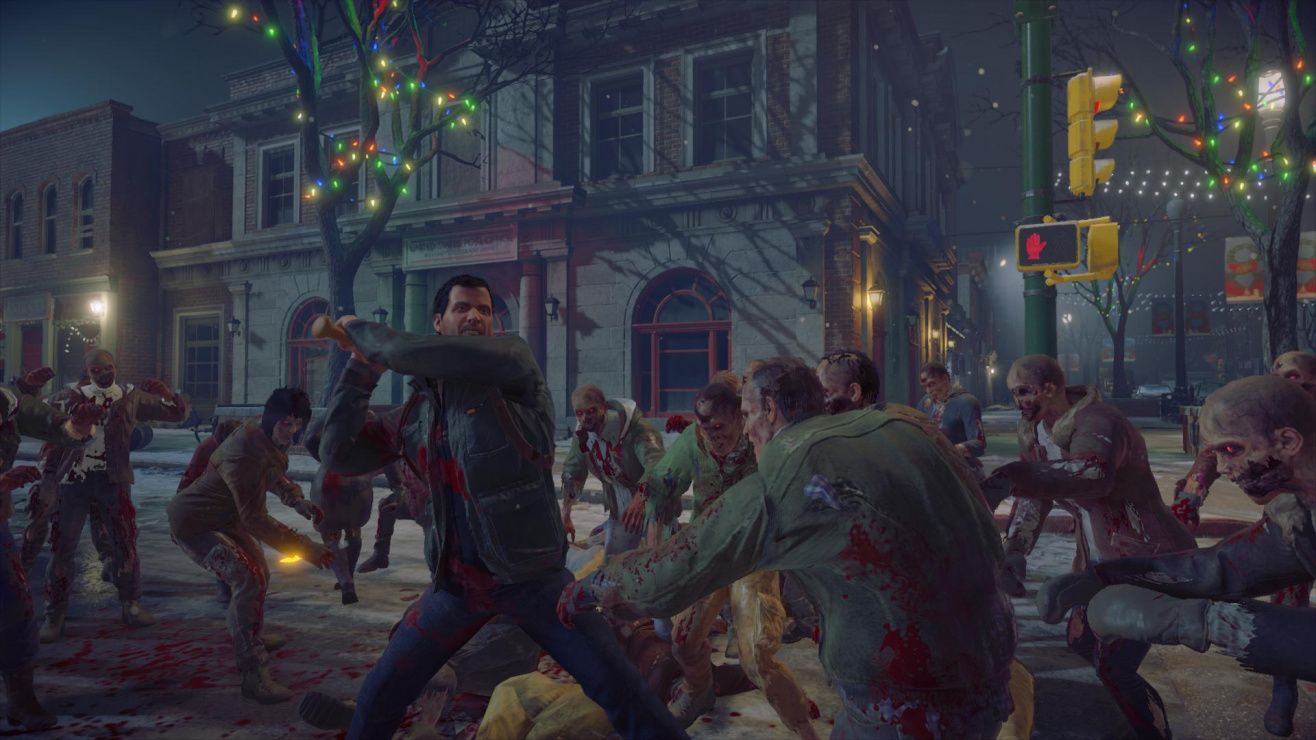 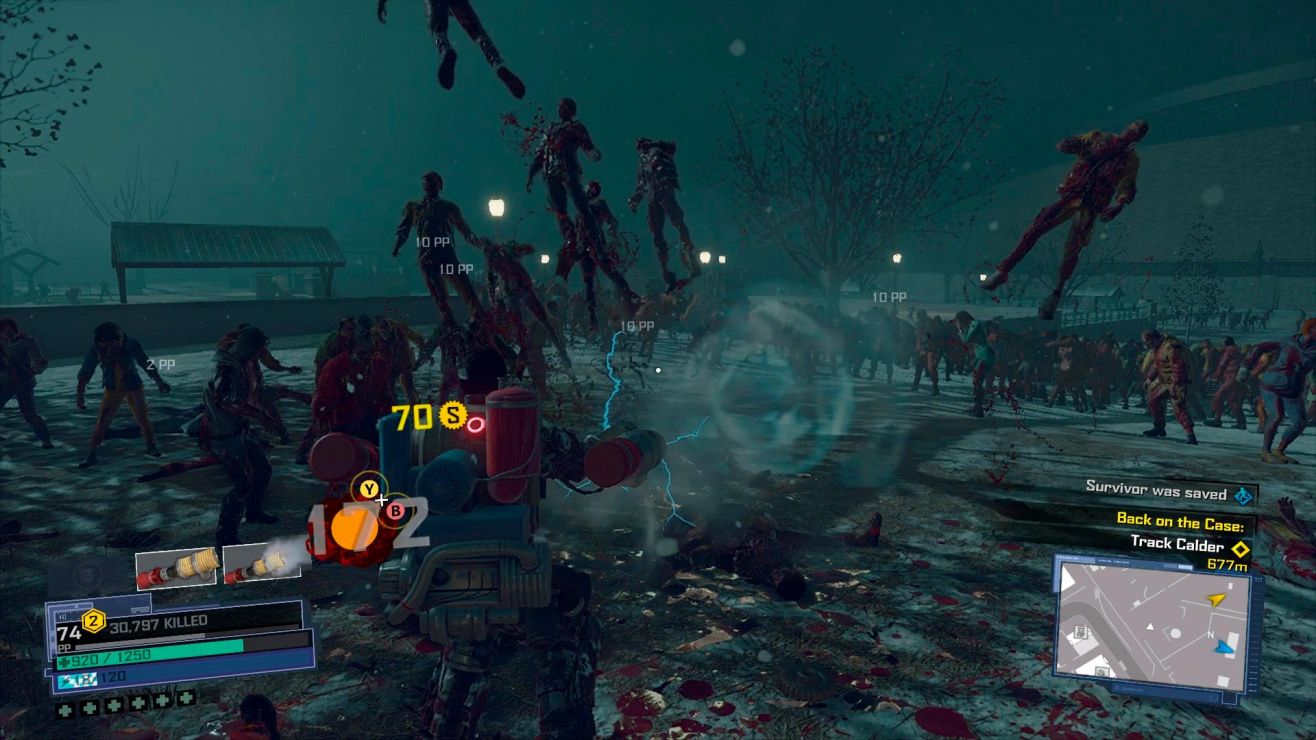 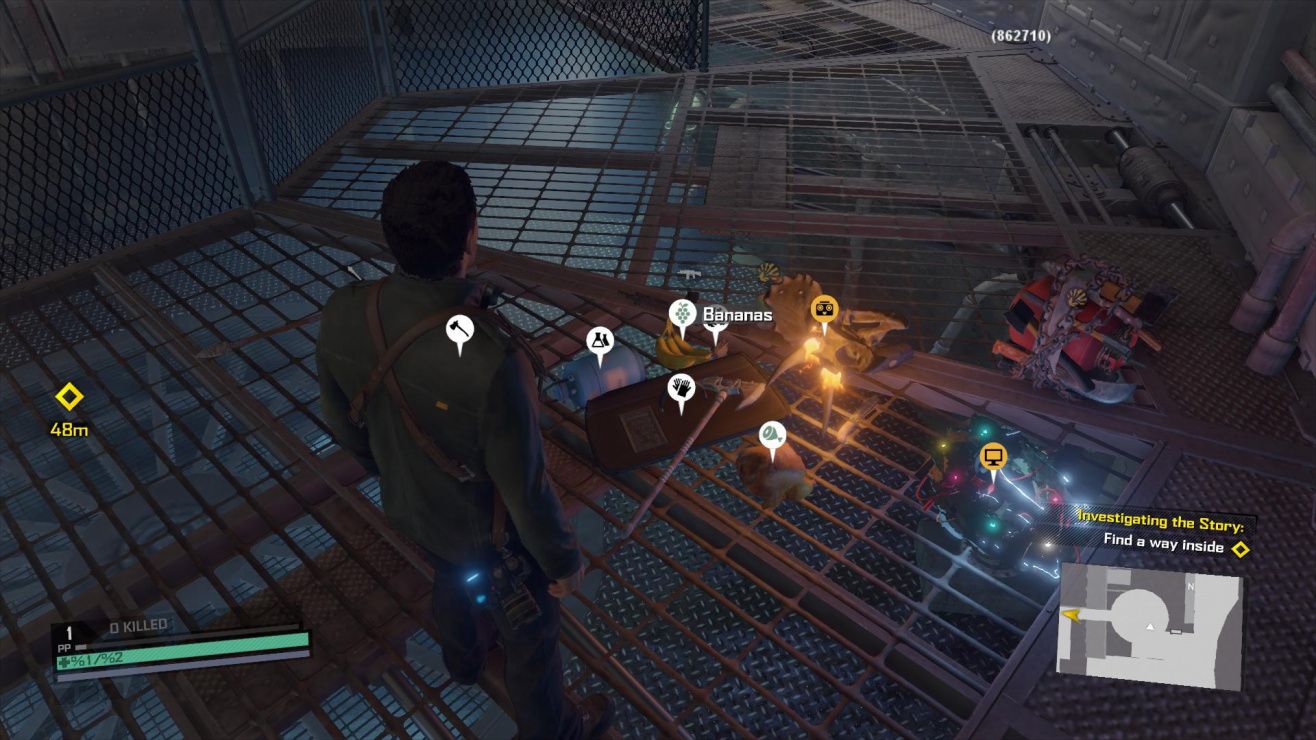 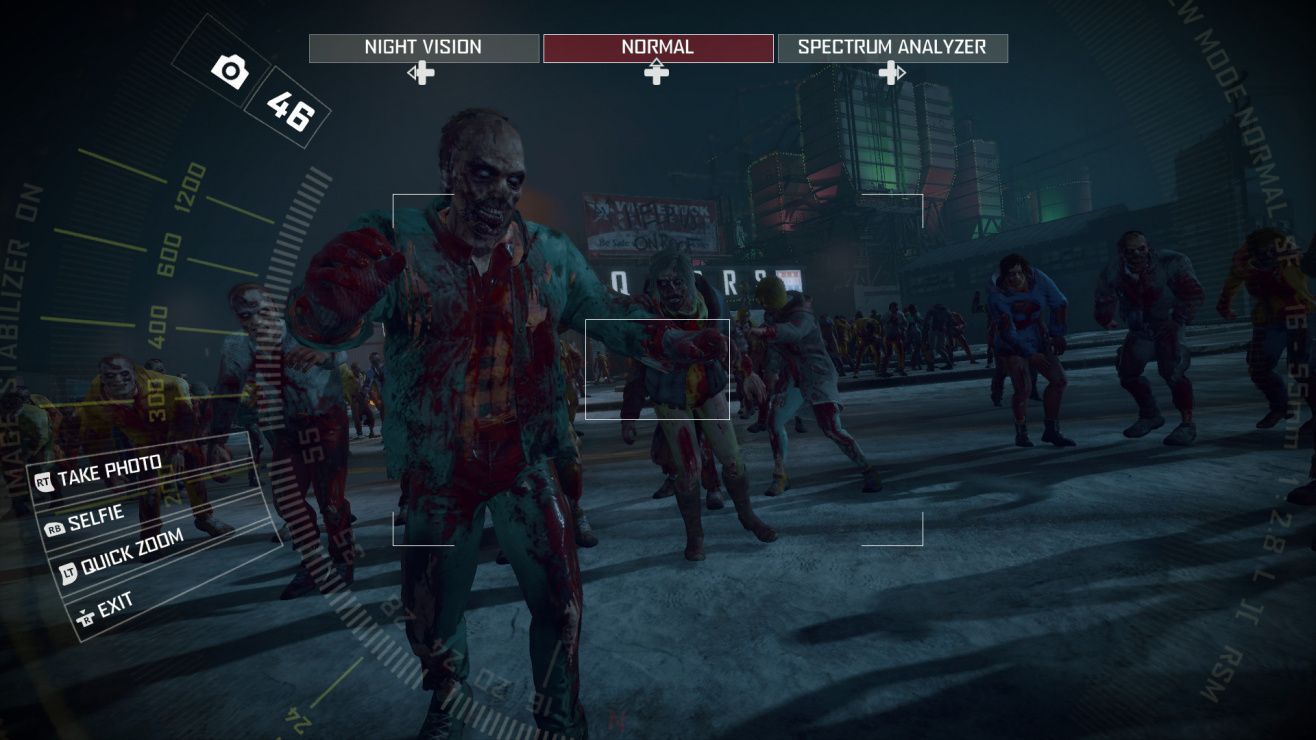 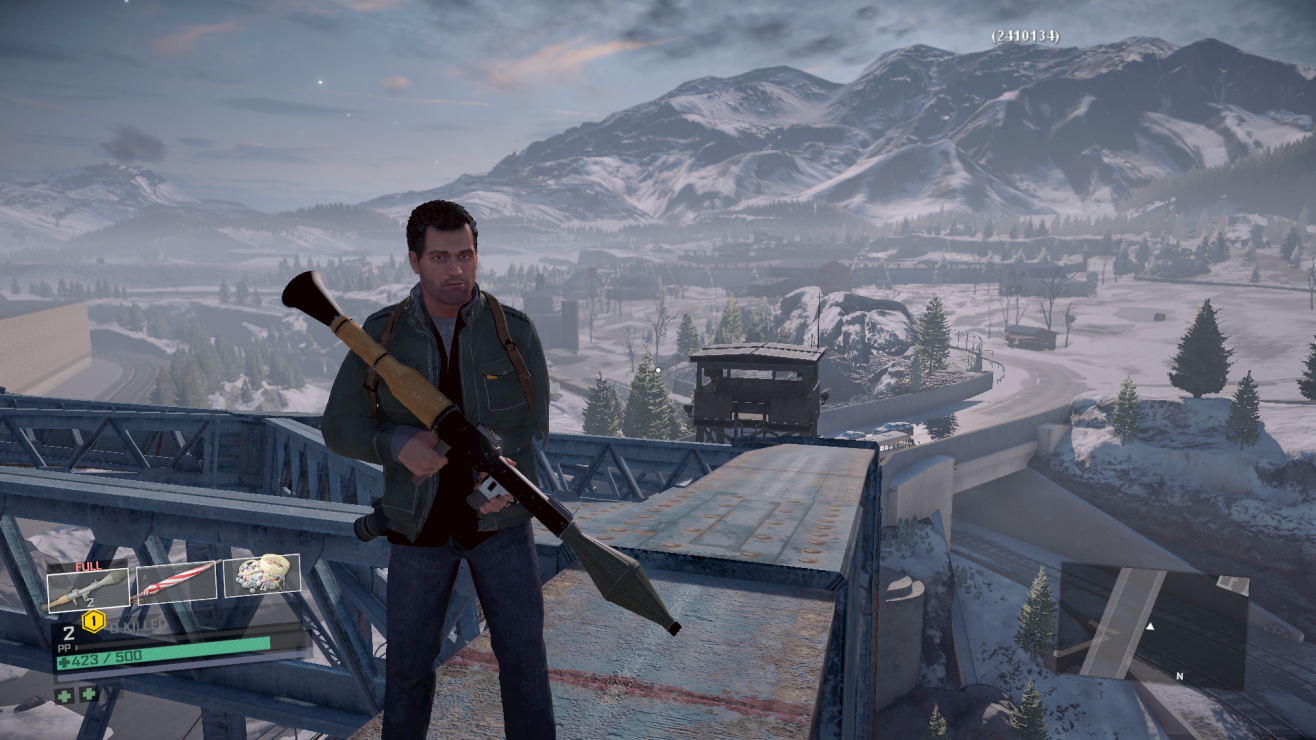 PC Steam Console Playstation action Xbox open world violent zombie gore online undead dead
Dead Rising 4 marks the return of photojournalist Frank West in an all-new chapter of one of the most popular zombie game franchises of all time. All of the classic hallmarks of the ground breaking series return, including a huge array of weapons and vehicles players can combine to combat the horde ranging from the practical – to the practically insane. Players will also enjoy ambitious new features including new zombie classes, EXO Suits, and 4-player co-op multiplayer. With intense action and an unmatched level of weapon and character customization, Dead Rising 4 delivers a heart-pounding experience as players explore, scavenge and fight to survive in an epic open world sandbox. Dead Rising 4 returns to Willamette, the setting of the original game, during the Christmas season. The game is a sequel set in 2022, sixteen years after the events of the first game, and one year after the events of Dead Rising 3, though it also acts as a soft reboot of the series.
Share Share Share
Promote for 50G

Grade = C+. Worth a buy, if you want an investigation mode & Capcom Hero campaign. However, if you're looking for better version of Dead Rising series, it isn't
⚖️Click to show list of Like & Dislike + Expectation List

I'm glad I finally got around to playing this Dead Rising 4. I figured it wasn't worth my time due to the negative reviews, but I had a lot of fun with this game. It's the same kind of great gameplay from the other games, with the same kind of fun environments to explore.
There were some sacrifices that were made due to a limited development time. I miss being able to mix drinks to make some different concoctions. And I miss interesting psychopaths that had their own cinematics and unique attacks (instead we have "maniacs" who don't have either). And I wish that DR4 had more fun mini games and environmental items that you could interact with like in the previous games. I also miss having powerful martial arts moves that could be unlocked.
However, I don't miss annoying features like timed missions and escorting survivors. I know that some fans like those features, but I can't stand them. And there are various other quality of life improvements with Dead Rising 4, such as how you don't damage survivors with your attacks, and you can buy maps that show you the locations of the all of the collectibles. And I like that throwing, melee and ranged weapons all have separate inventories and action buttons, which makes inventory management and switching weapons on the fly much easier. There's also a new feature where Frank uses special settings on his camera, but it's not that interesting. And the multiplayer is fun (if you can find people to play with).
As for the story, it's very forgettable, and the characters are nothing special. And I wish they hadn't changed Frank's design so much. He doesn't feel like the same character that we grew to love from the previous games. And the writing and humor in this game are hit and miss. However, even with the flaws of this game, I am still very much hoping for a Dead Rising 5 - especially since we have to get some kind of closure with Isabela's story!

so let's talk about DR4. in the past 2 years since the game was released on steam I always wanted to buy it but negative reviews held me back but at last i played the game and i've had a very good time in it. im not a hardcore DR fan but i played DR1 and DR2(never finished DR2) and i know what they're like. I understand why some fans are upset about this game but it's not as bad as some people say. yeah devs do forgot about the soul of the game a little by removing some features like rescue missions and timers but these things don't make DR4 a bad game at least in my opinion. DR is about having fun and doing silly things and i experienced them in this game. yeah it's not a perfect game but you can enjoy it for what it is. voice actor of frank west is not the same as in 1 but i like it. he's still fun and dumb and a complete asshole. the problems of the game in my opinion are side characters because they are not memorable or likable and some combos are so op that make them the only weapons u like to use. at last everyone have different perspectives but this game in my opinion is a good game and i had so much fun playing it , you still have frank west u still have so much dumb and fun guns & outfits u still can do silly things in this game and most importantly u still have TONS of zombies to kill so i think it's a good game.

Despite this game not deserving the Dead Rising title at all, I thoroughly enjoyed it more than I anticipated. The story is kinda meh, it's an okay story, I wouldn't say amazing nor would I say it is terrible. The gameplay itself is pretty good, no zombrex and shit is a huge + in my opinion, it runs pretty well on my machine as well. For a while I had an issue where I couldn't play it for more than 15 minutes without it soft crashing and I'd have to restart my PC. All I had to do was go into task manager and set the priority to high and the game ran like a dream. It felt like the issues was never there. If you can pick it up for $10, do it, I wouldn't suggest paying a whole lot more than that. I'm sure it goes on sale of a nickle and dime, so if you ever thought about picking it up, why the hell not?

i dont understand the hate for this one, if youre like me and dont care about how the character of frank has changed and just want a fun game, youll like this one

Played the original Dead Rising years ago. Got this one as part of a bundle, so I jumped on the chance to try it. Despite the volume of negative reviews, it was honestly not a big stretch from what I remember in the first game - therefor, still fun and interesting, with some new gameplay elements and obviously new story/weapons etc. It's not a masterpieces, but I had fun playing it, and would recommend it.