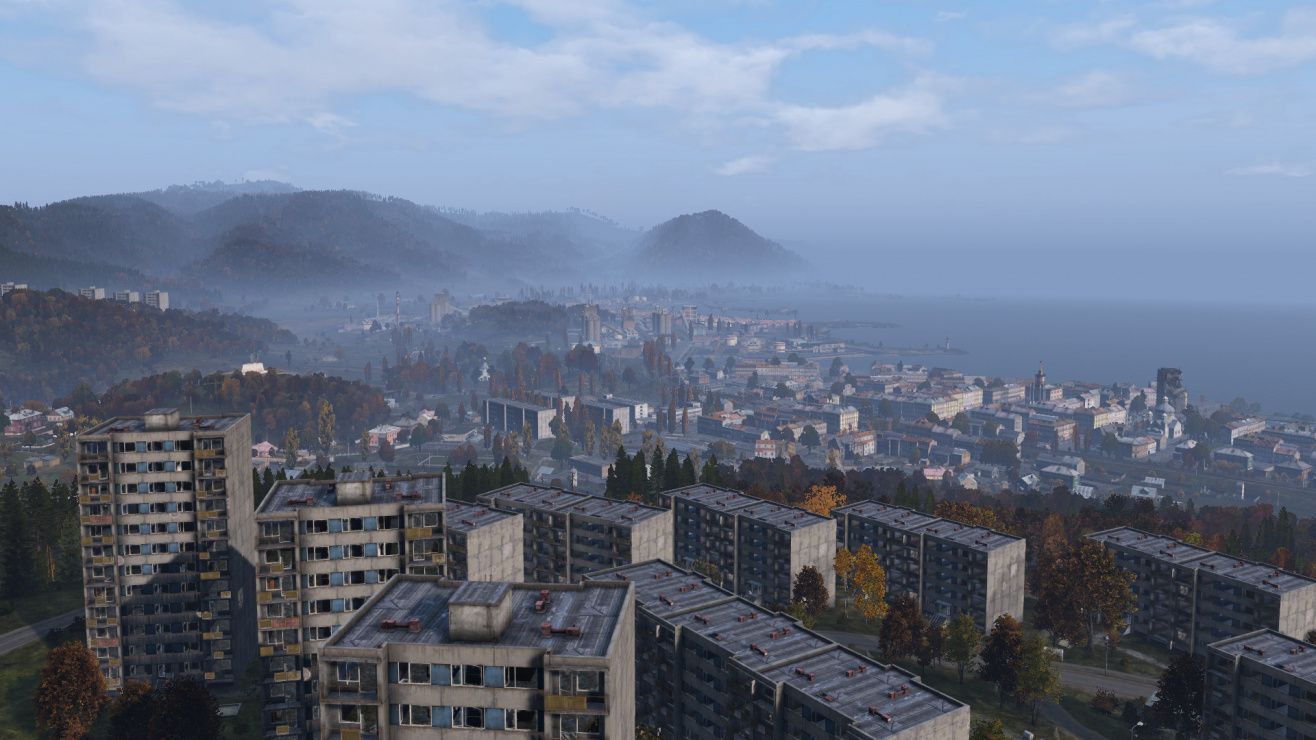 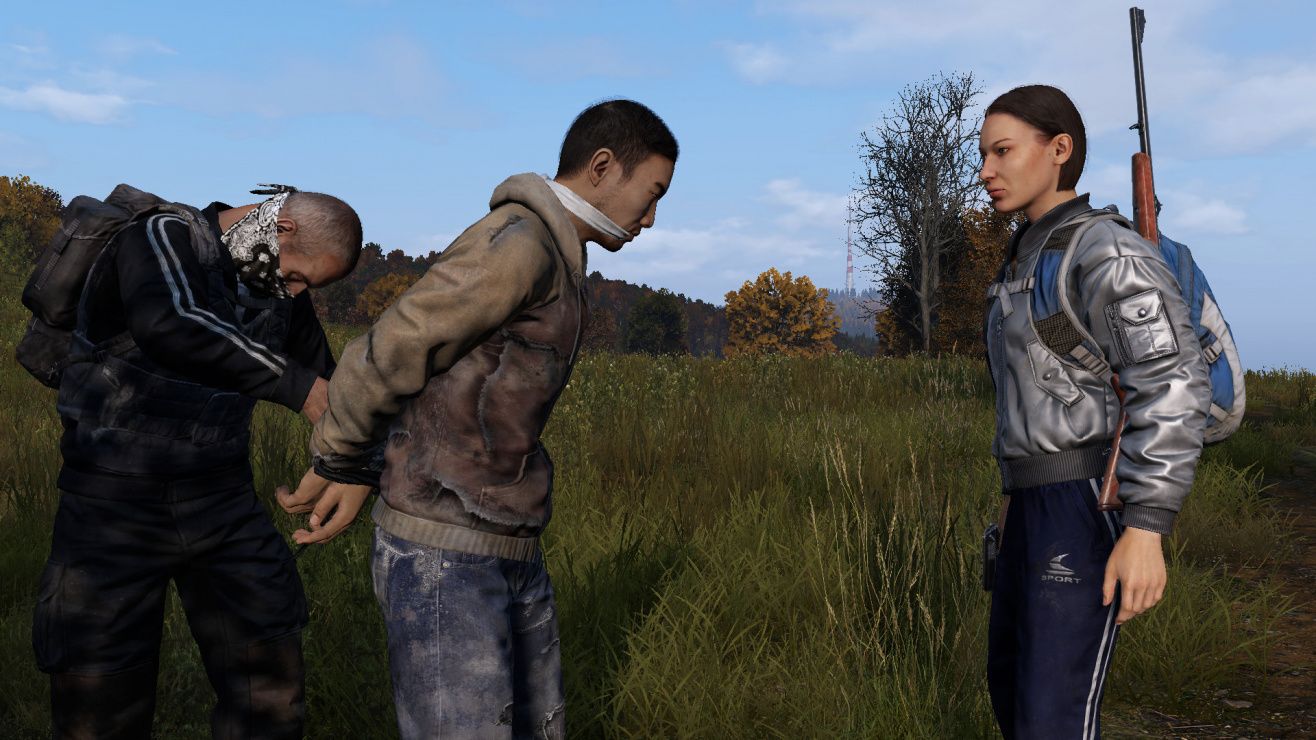 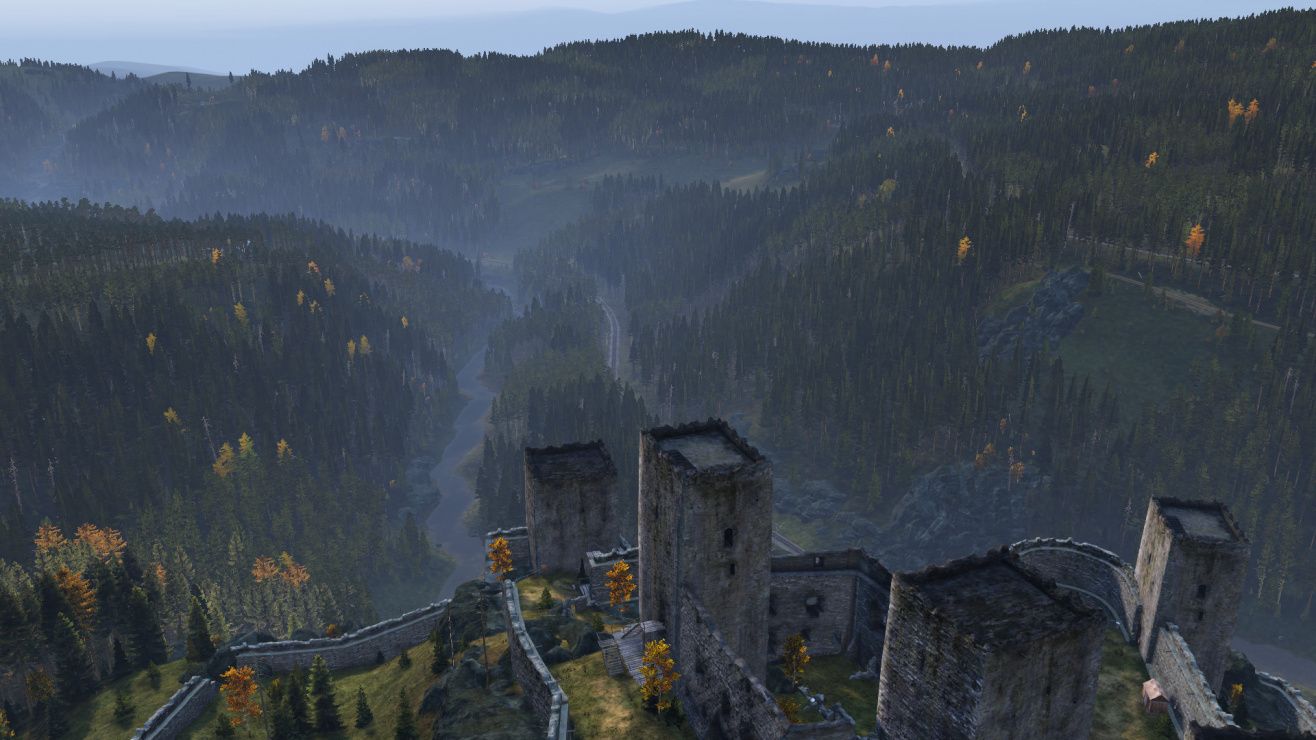 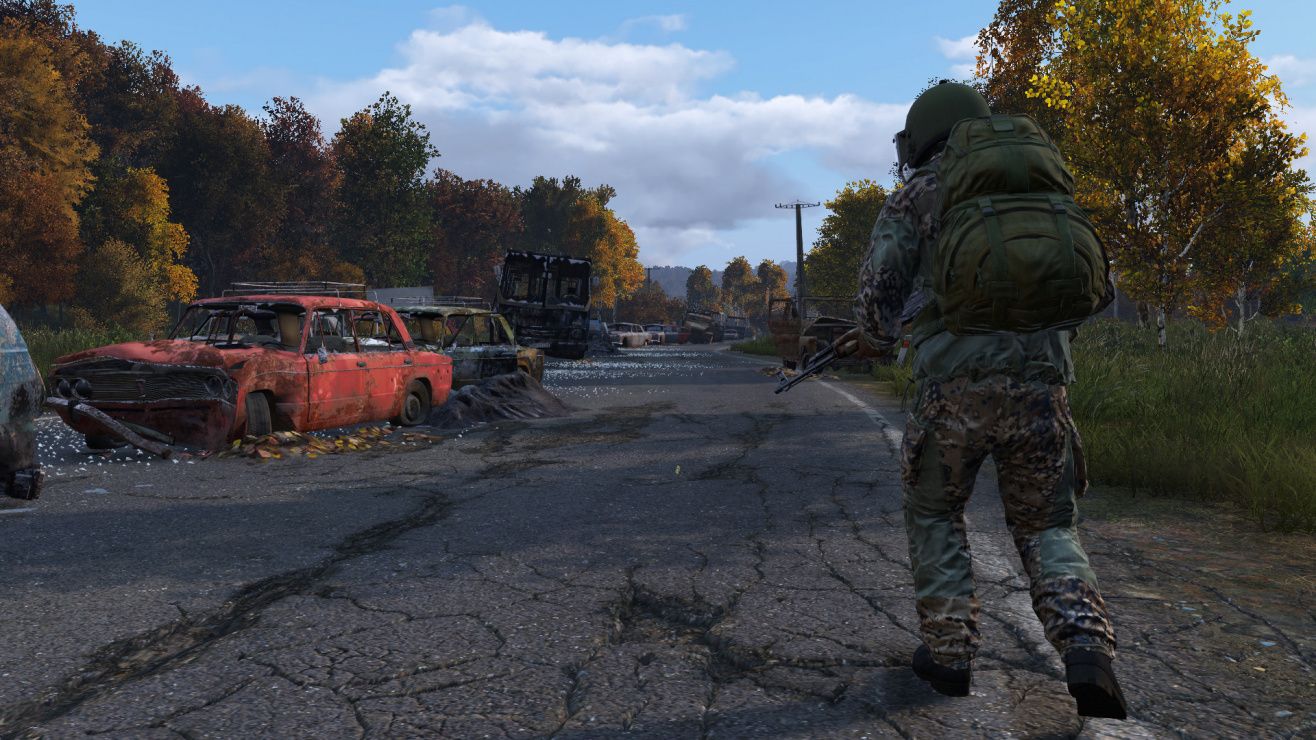 PC Steam Console Playstation action shooter zombie battle military guns royale
The post-soviet country of Chernarus is struck by an unknown virus, turning the majority population into frenzied infected. Fighting over resources has bred a hostile mentality among survivors, driving what’s left of humanity to collapse. You are one of the few immune to the virus - how far will you go to survive? DayZ is an unforgiving, authentic, open world sandbox online game where each one of 60 players on a server follows a single goal - to survive as long as they can, by all means necessary.
Share Share Share
Promote for 50G

I was looting the barracks in Zelenogorsk when I hear a gate being opened behind me, I turn and see a well-equipped player dealing with a zombie. I have a gun in hands and the advantage, but my entire current playthrough has been rather peaceful, so i opt for a non-violent solution. I duck behind the corner of a barrack and yell over direct chat that I don't want to kill him, and i circle around a stone wall trying to avoid line of sight. He answers, but it is intangible. I can't see him anywhere but I assume he went to the barracks. (1st person server btw) I try my best to not get in an awkward position and run up into the second floor of a house overlooking the military site. By the time I get there i can see that he has indeed closed the door in the prison building.
The reason i was looting military sites was to find some AK74 mags. That was my entire reason for being there. I'd trade my M4 for a couple of those. I think about the chances of being killed versus the chance of him might having such a mag for trade. I know it's risky, but fuck it. I run up to the prison building and say I'm friendly and just wondered if we could do some trade.
He accepts and tells me to come into the prison with my gun put away. This smells rotten eggs all the way to Rify, but I'm determined that my friendly intentions will serve me well.I enter, he is pointing at the door with an AUG. It's when i get closer to him that i see a second man with an AUG in the staircase. I explain what I'm trying to get and mid-sentence, a friend of theirs come in. He was likely watching the entrance. After a little meet&greet the say 'sorry, don't have any mags'. I say that's okay, and we agree that we wont go the same direction afterwards lest we run into each other again.
I drop a black skull balaclava that i wasn't using as a token of gratitude for the friendly encounter and I'm on my way to Mishynko. Half way there, somewhere in the forest, I'm shot in the leg. Pants ruined, but legs not broken. I very briefly get some vietnam-level flashbacks to the time my roommate taught me the basics of ARMA and combat, and I jump behind a tree instead of just turning around. I count down from 10 and regain my breath. My M4 is equiped with an ACOG, and the shooter must have been about 100-150 meters away.
I peek from the tree and see a man getting down on the ground by a bush. There's no peaceful solution to this conflict. My breath has gone down and I brace myself. peaking a second time with my rifle and shoot three rounds.
One of them hit.
I wait 4 seconds for him to likely have gotten behind a tree of his own to bandage. I start making a wide arch around him, moving as quickly and safely i can while preserving breath. I finally get to him and see he's unconscious.
That's when i noticed it was the third guy from before, donning a black skull balaclava. I'm angry, but not disappointed. this is the nature of the game. While i still have him alive and able to hear me, all i can get myself to yell was "I TRUSTED YOU" before I shot him. Looting his body, I find 3 ak74 mags, an ammo box full of the right ammo, an LRS and some decent stores of food. All in all, most intense thing I've had happened the last few months.

Pretty fun, but very sad. Met a Russian guy, we became friends, even with a language barrier. We played with each other for a while. Then I got shot in the head. And I never got to see him again. If you're out there man let me know. I miss you.

I entered a house looking for some food when I heard some footsteps outside. The guy said hey and entered the house, I said hey back, and he hit me with a hammer. This was the beginning of a beautiful tale, the tale of the Shoe Gang.
Running out of the house and up the street as far and as fast as I could, I finally stopped and turned around to see if I was being followed by the crazy hammer man. As I stood there, hungry and demoralised, I heard "behind you, behind you", and up came running another player, much friendlier than my previous encounter.
I told him what happened in town, and he charged off, "Let's get this mother fucker".
Armed only with my ten fingers curled in to balls, we ran at the hammer man, who after seeing our number had doubled, decided to take a more diplomatic approach.
He apologised for hitting me with his hammer, and explained he simply wanted my shoes for his friend. Little did he know that I had just found the most pristine pair of shoes in the house where we first met.
They were my shoes now.
Agreeing to put our differences aside, the three of us teamed up in search of the finest shoes for the hammer man’s friend. We searched high and we searched low, but there were no shoes to be found. Finally, we met up with the shoeless man, whose shoes certainly were in a state of disrepair. Unable to tolerate the toes of the bare footed, the four of us left town and made our way across the countryside.
Sometime later, we encountered another survivor. He had a nice hat, but we weren't there for hats. He was clearly uncomfortable, and he was right to be, as the hammer man had been stashing a secret pistol this whole time. We were explaining our need for shoes when the hammer man went for the kill.
Unknown to him, the gun went to the back of the man’s head, hammer man pulled the trigger, and he completely missed the shot. Listening to hammer man’s accent he appeared to be French, which for me, an Englishman, explained his inability to handle a firearm at 3 centimetres.
Hammer man pulled out his primary hammer and bashed the survivor over the head, and the rest of us piled in with our fists, turning the guy in to a battered mess. We were careful not to hit his shoes, but it turned out that he too was wearing worn footwear. However, it was enough, and our friend fitted the loafers over his aching toes.
It was a beautiful moment cut short, when the guy I met after the hammer man announced that his shoes were now unfit for purpose. Our thirst for shoes was not yet satiated, and we moved on in search of the next pair of clogs.
Sadly, my new friend had to go, leaving myself, the hammer man and his friend to fend for ourselves. The Shoe Gang were hungry, and so we holed up in an abandoned house to hide from the rain that had started to fall and munch our way through some beans.
The rain gave way, and we pushed on, the scent of leather driving us through the forests. We took part in some fishing, sat round a fire cooking, and discussed our shoe filled fantasies.
As we moved on and day began to turn in to night, the sound of wolves filled the air. We were outnumbered, and our shoes were worn out. They were upon us in the blink of an eye.
Hammer man was the first to fall, flailing his gavel relentlessly as the beasts took him. I attacked the alpha wolf with a big stick which only seemed to anger him. Soon everything began to fade, the blood loss was traumatic and I slipped in to darkness.
The wolves killed us all, and I have no doubt that they took all of our shoes.

6 Years ago I bought this game. It was... shitty and full of desync and bugs. And yet everyday I found myself playing for hours upon end. The reason thousands of players just like me keep coming back to Dayz is for the amazing player interactions and experiences. Its unlike no other game I have played. 6 years ago I met 5 people in a town called elektro, still play with them to this day, and a couple of months ago I got to meet them in person while attending one of their weddings. I will always come back to Dayz because there is simply no other game like it.