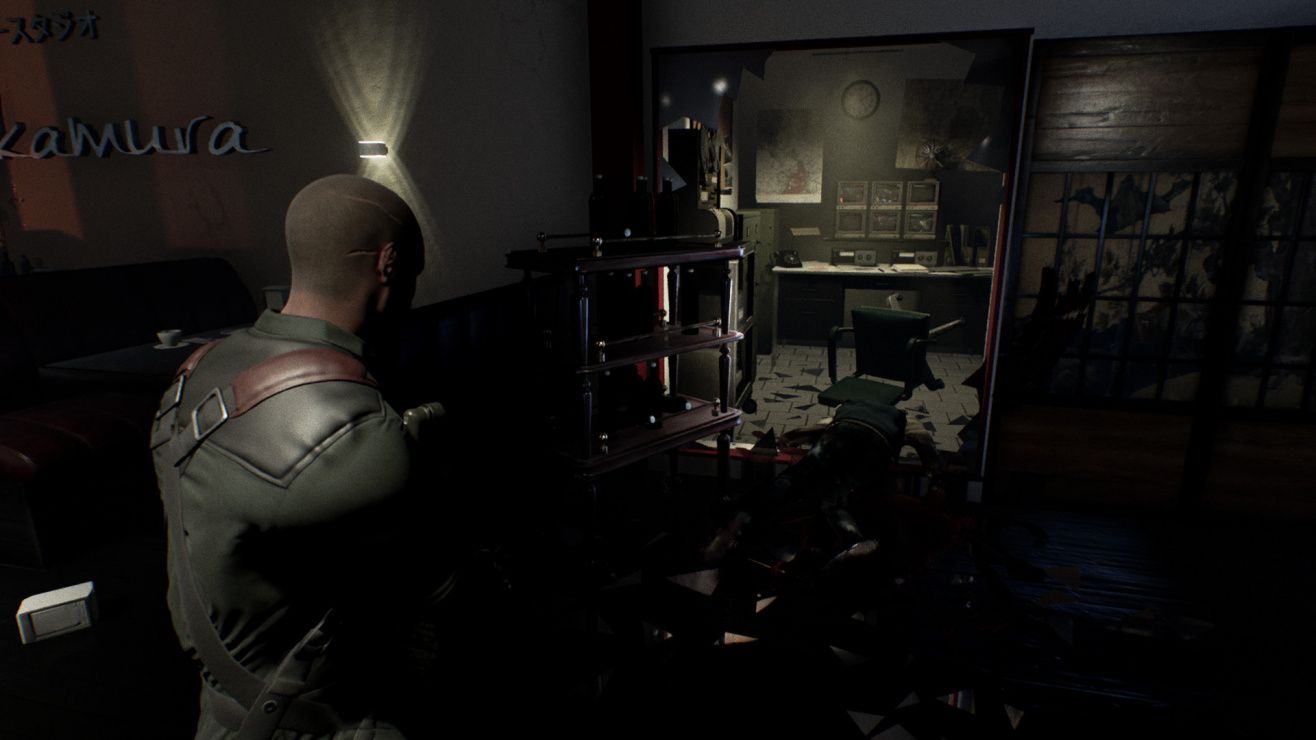 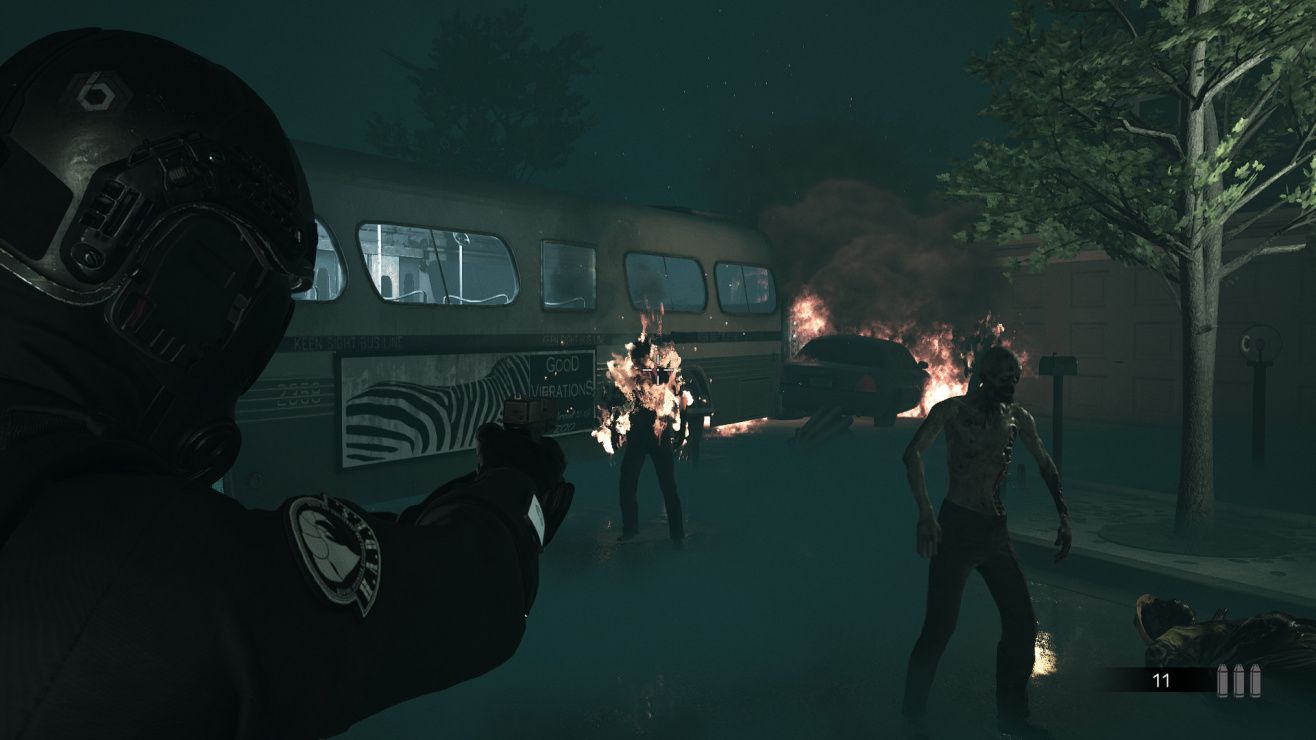 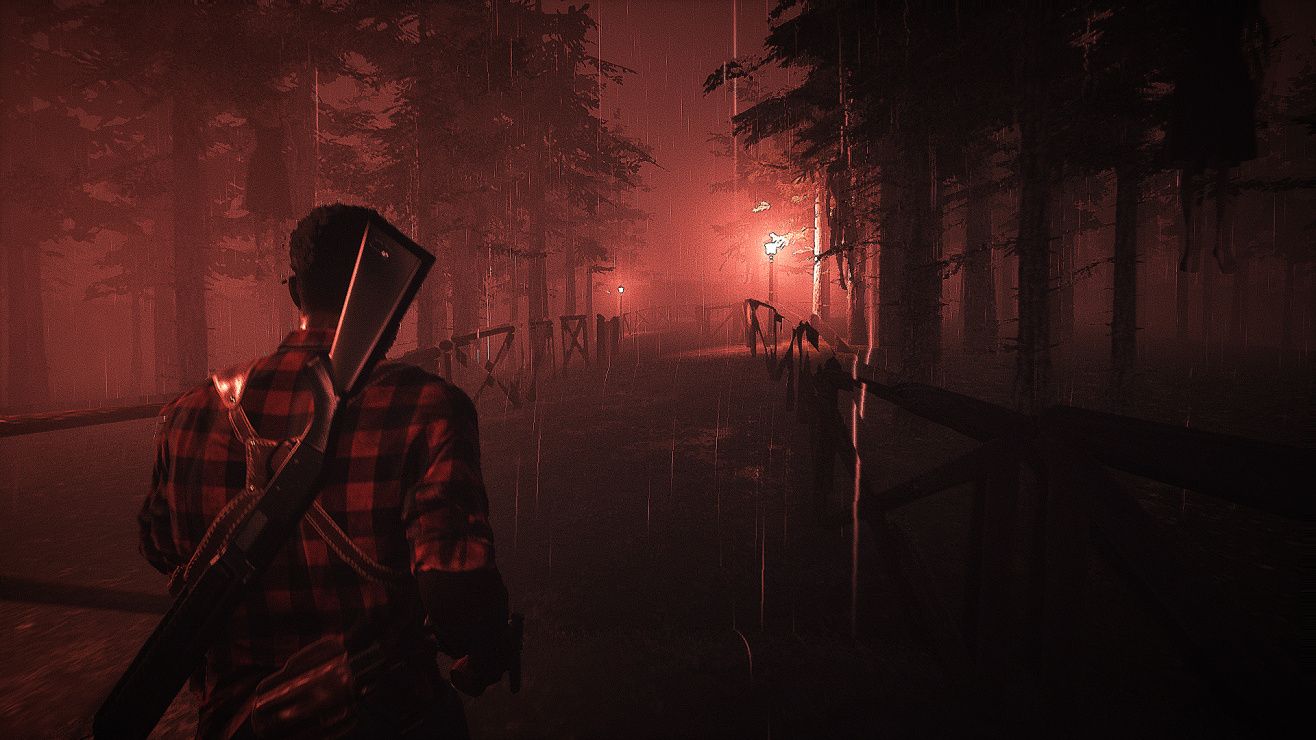 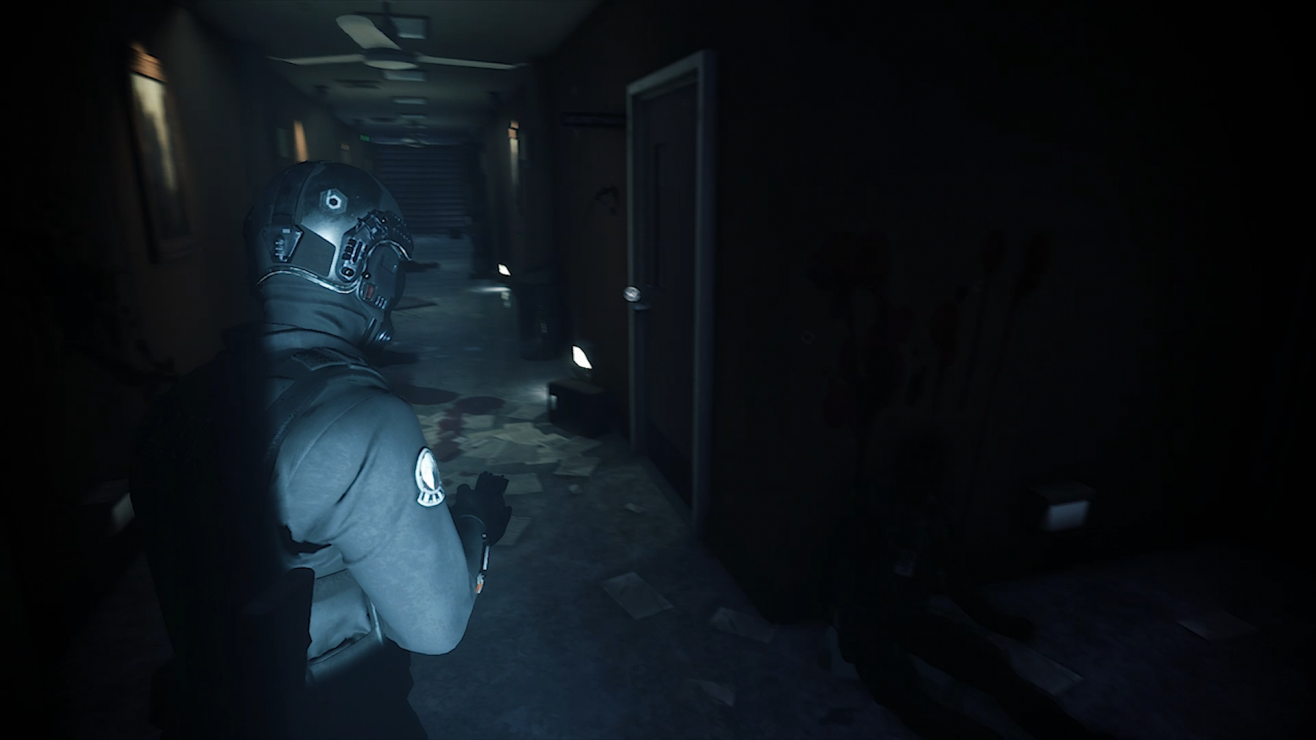 PC Steam action indie adventure survival horror dark zombie
DAYMARE: 1998 is a third-person survival horror with hardcore survival mechanics and hard to kill enemies. It requires a strategical approach to combat and puzzles and offers a multi-character point of view on the story, revealing a deep and obscure lore. The scene is set with a secret research facility, a deadly chemical weapon and a special security team to investigate this incident with the potential to become much more than just a security breach. Follow the steps of an elite soldier, a helicopter pilot and a forest ranger, as they play out their roles in an event that transforms one peaceful small town into a deadly zone and its citizens into bloodthirsty monsters. Take the creatures down first, before looking for any clues and evidence to bring more sense to the mess. Keep track of your itinerary, as resources are scarce in a situation like this! Anything can happen when your daymares become real… Fans of the iconic cinematographic brands and classical gloomy survival horror games of the '90s will be thrilled, seeing how DAYMARE: 1998 recreates the atmosphere of the most beloved works from the end of the millennium and places a typical yet fresh story in the middle of it. The plot unfolds through the eyes of various characters, putting players in the shoes of different personalities that will guide them through their theories and doubts about the situation.
Share Share Share
Promote for 50G

Had this game since it released, but didn't play it much. Since I'm almost 60 yrs old now the game was too hard for me in it's original release, reflexes just not what they use to be. The game was not at fault since it did pay homage to the original RE series pretty well in almost every aspect. Since the last update I have been really enjoying the game now, since it's much more adjustable to fit my skill level. Overall not a bad outing for indie Invader Games in the survival horror genre. Hope to see more from them down the road.

I really like this game. I was not expecting (Daymare: 1998) to be as good as it is after reading the mediocre reviews & scores. I don't understand them at all. I'm having a blast with the game. Only payed 8.99 £ for it also during this 70% off period and thats a total steal. I love the sharp graphics and lighting in the game which brings a creepy atmosphere to life along with good sound effects and music. The control feels good also, when moving the different character's you play as and it feels smooth and tight. I don't mind pushing 2 buttons when you have to sprint fast. It works well and easy with a keybord. The gunplay is not as good as (Resident Evil 2 & RE3: Remake) but it still works. The reloading critizism i came to understand in the beginning but after i learned how it works it became functioning.
I have not finished the game yet. I'm at chapter 3 of 5 totally. I take my time with games and explore everything. The story feels pretty good i think. Maybe the voice acting is not the charpest but that doesen't bother me much. There was some segment in the first chapter in the end that was on time and that did not match the rest of the well made game. But it was not long luckily and not the best idea. The game runs well on my PC with no dips in framerate and no crashes.
Really FUN "Resident Evil" old school type game. Survival horror classic.
______________________________________________________________
:::::: EDiT :::::: Finished the game now and i really liked this horror-action adventure. The first 3 chapters was the best of 5 totally. It was still an enjoyable game but it felt a little bit rushed in the end. Daymare: 1998 is wort full price i think. There is some bonus videos after the roll credits after finishing the game. I really hope that Invader Studios is working on Daymare 2 now. Great first game by the devs and this can be a very good Resident Evil clone series.
/// Score: 7.5 of 10

Short version: I really wish I had a sideways thumb. If you've played a Resident Evil game and you're like "I want more of that", it's worth picking up. But only if you're comfortable using WASD for movement, and you're willing to adjust your expectations based on the price.
The good:
* It appears to have more content than the RE3 remake.
* Some of the sound effects are quite good - especially the guns.
* Management of individual magazines for your guns feels right at home in a survival horror game. It's a great addition.
* I am so damn tired of dealing with zombies in sewers. What were all those people doing down there to begin with? But other than that, the environments are enjoyable.
The bad:
* The writing, voice acting and corresponding animations are very, very rough. If you're in this for the zombies, you may not care. But it can be quite jarring at times.
* The closest thing to a boss fight is needlessly confusing. I eventually had to give up and ask youtube what to do about it.
* Too many (virtually all) of the game's lore items are references to a website. I get the ARG angle. In some games, it works. But survival horror games rely heavily on immersion, and the game actively encourages you to pause and open up a deliberately bad website.
The mind-bogglingly terrible:
You can rebind your movement keys away from WASD to something else. Great! But you're still stuck using WASD to navigate the menus. And the fact that you have to manage individual magazines means you're going to spend a fair amount of time in there. So if that key combination doesn't work for you, pass this one up.
As a software engineer, I'm simply appalled. This tells me there are multiple, separate code paths responsible for interpreting that "key W = move forward". And that those code paths are somehow... hard to change? That wasn't a challenge when I started writing software 20+ years ago. It hadn't even occurred to me that it was _possible_ to make this difficult anymore.
Professional grievances aside, this was a minor annoyance for me. My keyboard has a physical layout that makes it difficult to use WASD, so I'm forced to use ESDF for most games. I can manage WASD in the menus, but it requires re-positioning my hand. But there are lots of people who don't have the luxury of just being slightly annoyed about this, like people with certain disabilities. And lefties. For them, not being able to change keybindings may be a game-breaking experience.

Daymare: 1998 is a third-person survival horror game.
The developers tried to recreate the mood of iconic titles from the '90s. The game is heavily inspired by Resident Evil. Originally it was planned to become a remake of Resident Evil 2.
An incident turned a small town into a deadly zone filled with zombies. There are three characters to play with an elite soldier, a helicopter pilot and a forest ranger.
The story is not really new, so I find it kinda boring. Also the characters are pretty boring from my point of view.
Controls are wonky, but you will get used to it.
Graphics are okay but the characters have absolutely ugly faces.
The voice acting is not the worst but could have been way more better. The soundtrack however is good.
There are also a few game breaking bugs, I had for example a problem were one boss monster felt through the map and I had to replay the whole boss fight.
Fans of the old Resident Evil games and people who would like to play some oldschool survival horror game will probably like it. Even with the negative things I mentioned, I liked the game overall and had my fun with it. From my point of view the developers recreated the mood of the '90s horror games pretty good.
It is not the best horror I have ever played but definitely not the worst.
Sounds 7/10
Graphics 6/10
Gameplay 6/10
Atmosphere 8/10
If you liked my review, please feel free to follow me and/or my curator group:

I actually feel like this game is horribly misunderstood.
The whole premise of this isn't to be a clone of Resident evil, or even pry off of your nostalgic feelings for past resident games.
In itself, it's supposed to be cheesy, the voice acting is supposed to be bad, because things like that in 90's horror games were like this, and to be honest, it works really well here. Only a couple hours in, but have watched the games stream and many other gameplay videos, and from an outside perspective, or a person that has been spoilt in the newer age of horror games, they'll just see this as trash, because they don't quite understand the concept of what it's trying to be.
I'm not saying it's going to be the best game you'll ever play, but if you enjoyed horror games growing up in the 90's (like me) chances are, you'll probably enjoy this and laugh at how bad the situations and voice acting are.
The game is also pretty challenging when set to the difficulties the Developers recommend you play on.

I'm going to give a cautious 'It's alright but...' for this one.
Daymare is a straight-up homage to classic survival horror, and unfortunately that goes both for and against it. On the plus side, the game looks pretty decent for a smaller title, the guns handle well, the score is pleasantly atmospheric and while the puzzles are indeed difficult at first blush - the logical solutions aren't far away.
The problem is that the story is absolute drivel. I can't really put it up to purely translation - the story flounders through terrible dialogue, with a conspiratorial plot that requires you to log on to the Daymare website to get all of the lore (which is precisely two steps further than I could be bothered) and concludes with a 20-minute post-credits epilogue that's full of information that should have been conveyed throughout the game proper. I think there's some confusion when people think of 'twists', believing that they're supposed to be a last-minute 'gotcha' that subverts our expectations, when they're actually better served at peak moments as the story goes along, redefining our motivations and giving us fresh context.
As it stands, if you can enjoy Daymare for the gameplay, which is again, pretty fun, then that's alright. Just ignore the plot.