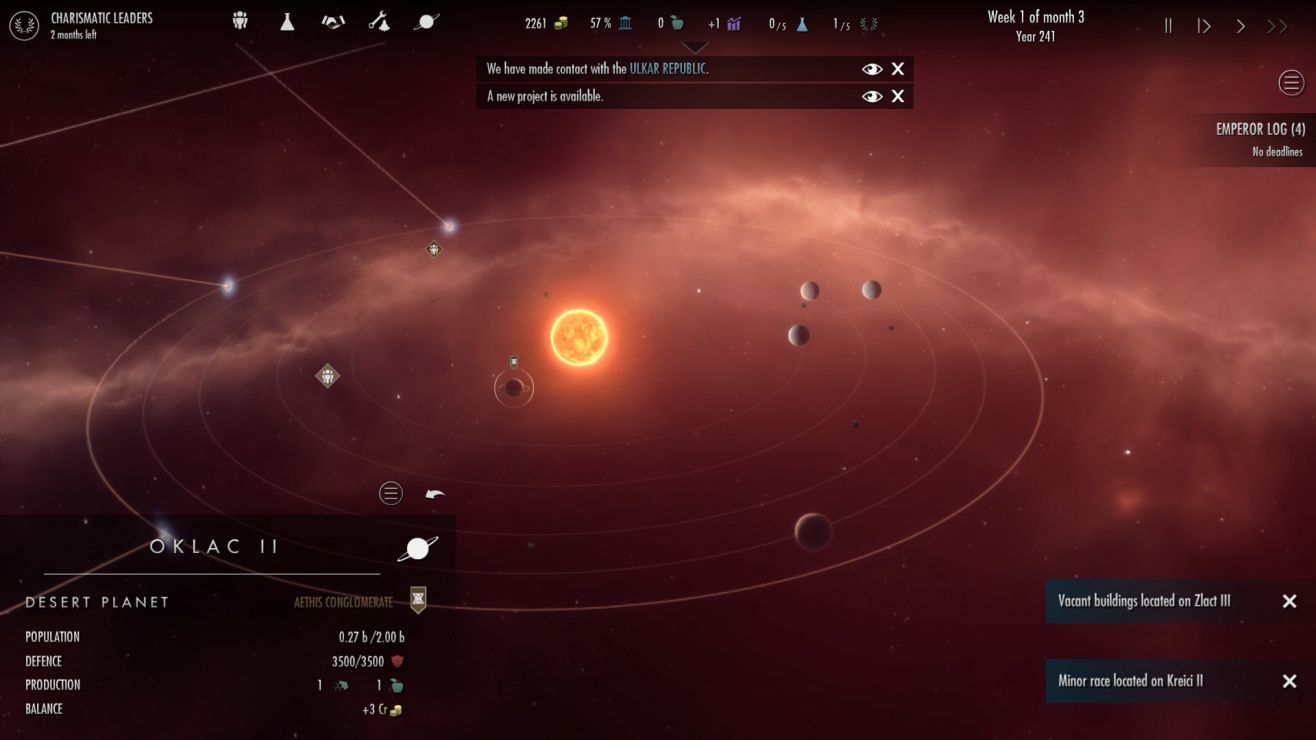 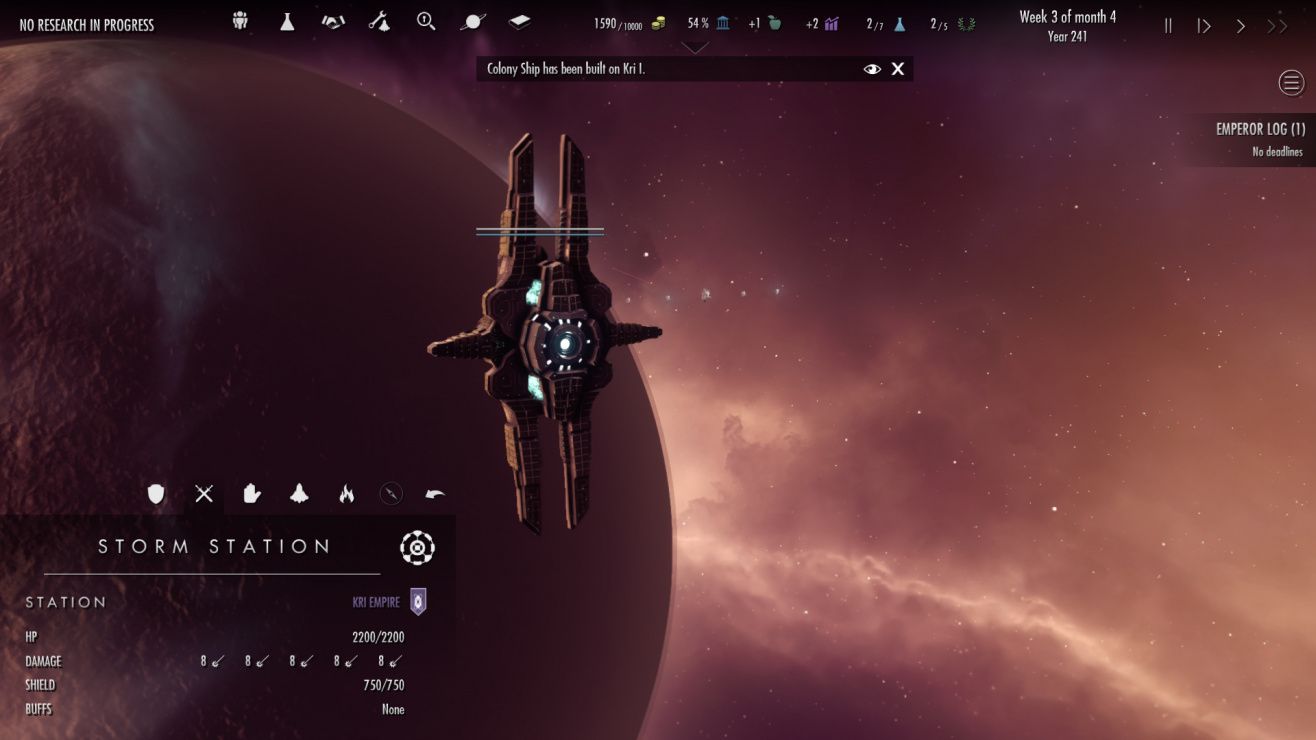 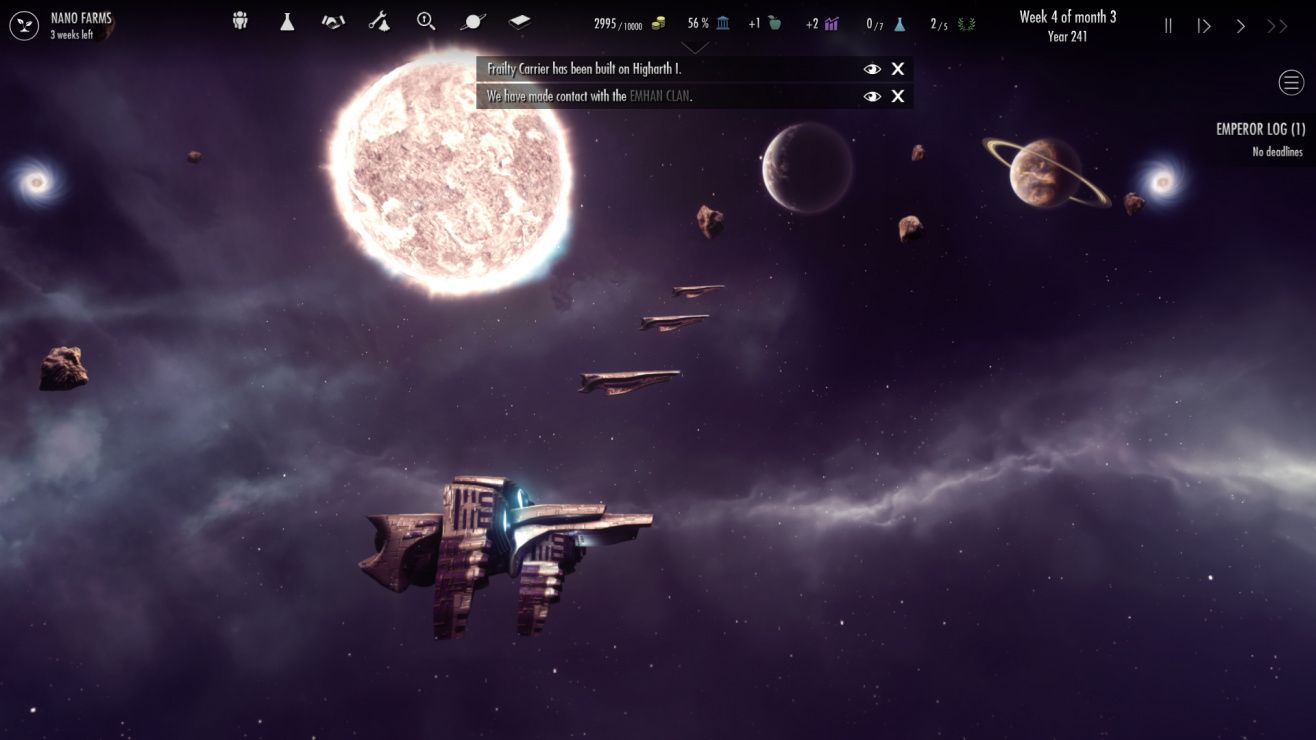 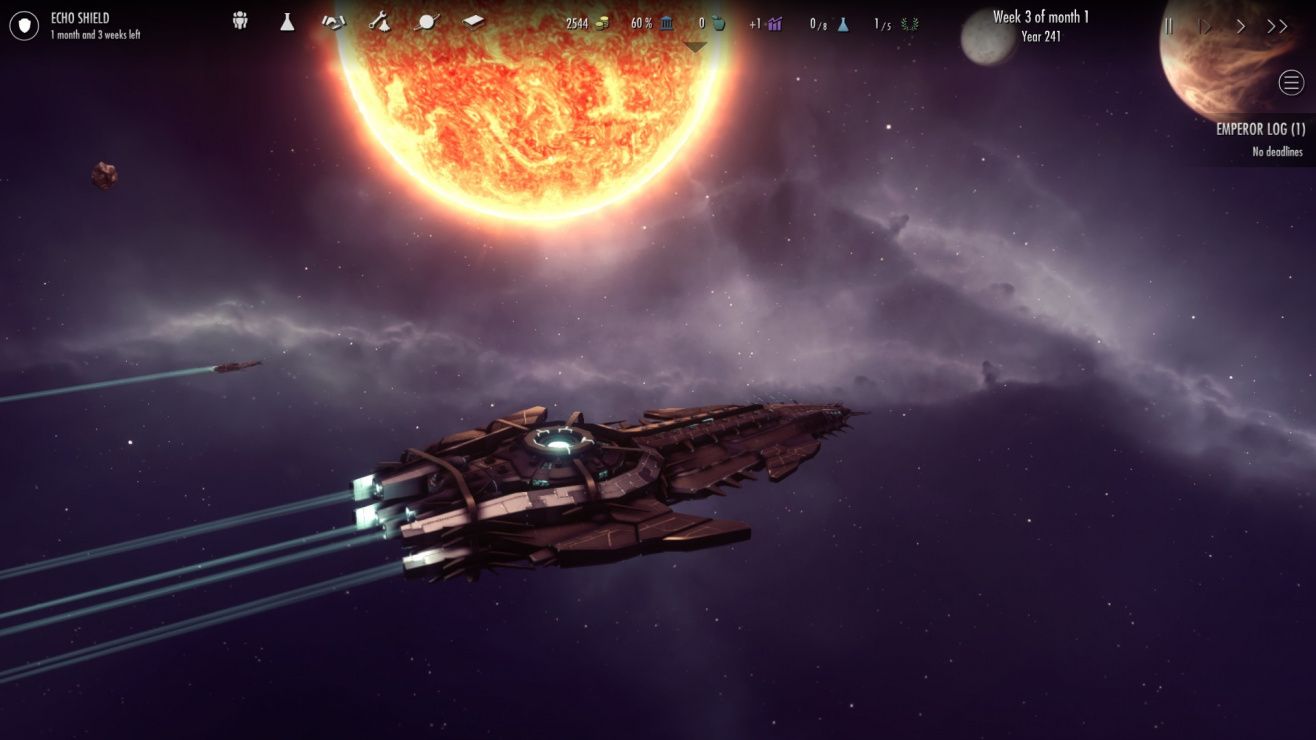 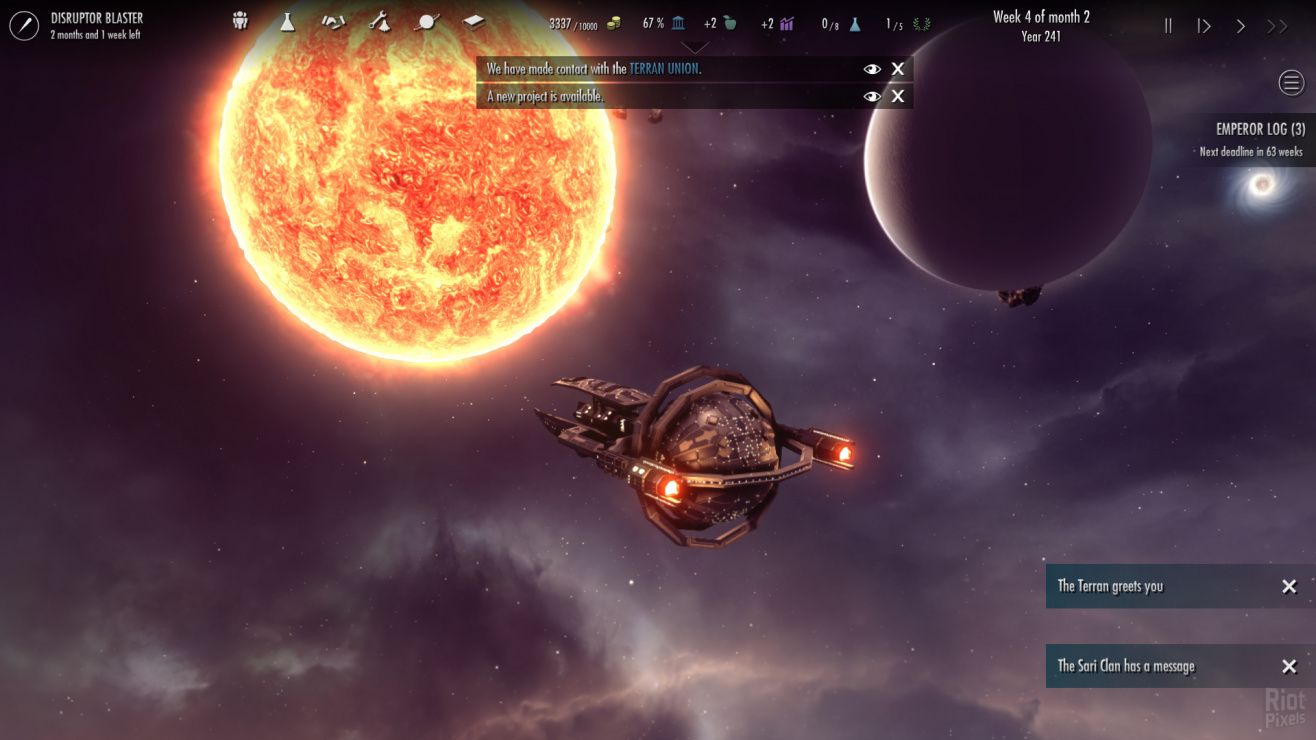 PC Steam indie strategy sci-fi space rts galaxy spaceship real-time planet solar
Andromeda has seen quieter days, and it’s up to you to take the reins of one of many civilizations, and guide it through the many hidden dangers in the galaxy. Dawn of Andromeda is a pausable, real-time space 4X game focused on providing an accessible, fast paced, fun and immersive experience that allows you to truly play as an Emperor. Build your empire, colonize new planets, interact with other factions and characters, research new technologies and build fleets so powerful, your enemies will tremble. Explore a galaxy filled with diverse factions, outlaws, merchants, pirate clans and mercenaries but also anomalies, black holes, ancient artefacts, ruins and much more. Arriving in a new system may provide new opportunities, or open a new can of worms. Are you up to the challenge? Eras; unique scenarios, each with a pre-designed galaxy and background stories which you can play as one of the existing factions, each with their own victory conditions.
Share Share Share
Promote for 50G

I do recommend this game for the following type of 4x player.
- Those who do not like to get bogged down with colony management
-Those who enjoy a quicker paced game than say Stellaris which can be quite epic depending on settings and style of play.
-Those who appreciate not being able to blitz through the tech tree and have techs / units that are obsolete before built.
- Those who prefer warp lanes travel and choke points....
I like the minor randomization of tech, and other elements.
Having said the above there are some things that need to be fleshed out to make it better and more re-playable.
Colonization should perhaps be more in depth. Meaning only habitability rating matters, no distinction is made between oceania, desert, ice, gas etc. If it is listed as habitable you can colonize.
Ship design needs a little more depth I feel.
In depth is not necessary to be a good game but some level of depth is needed to make it feel more immersive.

The game is awesome it is more than what I expected, the RTS style fits so much better than the TBS (Endless Space, but is also fun) the ablity to start to micro manage the colonys is on the way to what would be the best RTS of all time for me. Its still early access so it does crash every now and then but that is to expected from a game still in development ( their autosave feature saves quite frequently so your game shouldn't be to far behind after a crash). On another note if any of the devs read this, the one thing that would make this the game ive dreamed of would be if you could actually build the buildings in the colonys yourself with a build menu like Starcraft 2, and placement style of Sim City, Tropico, Starcraft 2 or something similar or just placement spaces of sorts but also keep the investment tabs to make it so only certain things can be built with a certain ammount of invesment points, and when riots happen on your planets you can get the option to go down and contol the riot yourself with the RTS style that you have with the ships or something more simpified. but that is what would make this game the game ive been dreaming of. 9/10 for now. Thanks for Reading and if you read this and agree with my idea with the colonys could you give this a thumbs up so maybe a dev can see this Review. Thanks Again.

Before purchasing this game, I read alot of reviews. alot stated that the game was (despite early access) promising, and yet somewhat hollow.
After some reasonable playthroughs, I can honestly say that DoA is like all those chocolate easter eggs. They are big, appealing and at first taste so so delicious, yet ultimately are finished too soon because guys and girls, and not to state it too on the nose.....hollow.
Whats Good: Graphics, Ambience, interface....the gameplay is intuitive, and it doesnt need you to have played any game before for a novice to pick up the mechanics.
Whats Bad: Absolutely nothing......yet everything....its not enough. its too simplistic....yeah yeah yeah I know micromanagement is the biggest bugbear of all 4x games, yet please allow us some variance in our colonies, a reason for having this or that planet. At the mo all the races seem to like the same habitability, so you ultimatley fight over the same terrain for not much of a variance in the colony. It all blends into a land grab to build up economy and military, and then bash the enemy over the head with your new toys. Oh and speaking of your vast armadas, well there is two ways of doing that; build alot, send and smash...wash, rinse, repeat, or build smart....build a tank or two to micromanage and support with a group of missile boats.....the AI allwyas targets your tanks leaving your boats to obliterate even the toughest of foes......pirates no longer hold a threat.
I give this the thumbs up because of what it could be.....just like Stars in Shadow this has so much potential.....but please, please, please for (insert preferred diety or profanity) give this some depth, nuances, creamy soft caramel filling or at least some M&Ms (US)/Smarties (UK) for use to get our sugar high from. MOO 1&2 gave us starship tag, Homeworld gave us ships we cared about, Sins of Solar empire, gave us real time thrill of battle.......this could be all of this and so so much more without compromising its simple game interface and playstyle.
Go to it Greywolf

ICEBERG strikes again? One of the worst publishers on Steam. Just look at their catalog of abandoned, over simplified, left to rot, poor quality and BADLY reviewed games and one wodners where what part THEY are haviing in the failure of these games...as I can't believe it's A:: the devs doing...either way, this particular one I like, it is too simple, and reeks of the usual medicrity that could have been greatness IF the developers would just WORK ON IT...I don't know if ICeberg forces them to stop or has a desire to be the worst publisher in the business so they refuse to let devs make good complete and fleshed out fgames or what...i do know it's strange. This one however at least is good enough for an upvote.

I don't know a lot about 4x and Grand Strategy nor play them much so I don't have a lot of bias/predisposition or knowledge, but I did play a lot of Sins of a Solar Empire and I can say that I see great potential in this one.
It looks and feels very polished, the UI and general design just seems to be really good quality.
The depth is good, but not to a point where it feels too complex. The politics and diplomacy are somewhat random each game (based on the 5 council members you pick from the start based on a random pool, their traits will determine your focus and direction for the whole game) and I particularly like the surveying and artefacts aspect of exploration.
The music is fantastic, the other races look great. For a strategy game, it is incredibly immersive compared to what I'm used to. But again, the only think similar I've played is Sins, which is pretty old.
That's all I have to say for now. If you like space and RTS games, you should like it.

DoA is a relaxing game done by a small team. It has a lot of nice ideas and features all the aspects you can expect from a 4x (Spy, exploration etc.). For the price, you've many hours of play in the different scenarios. While the support has been slow, it has been constant and the game just got a new update two years after it's release.