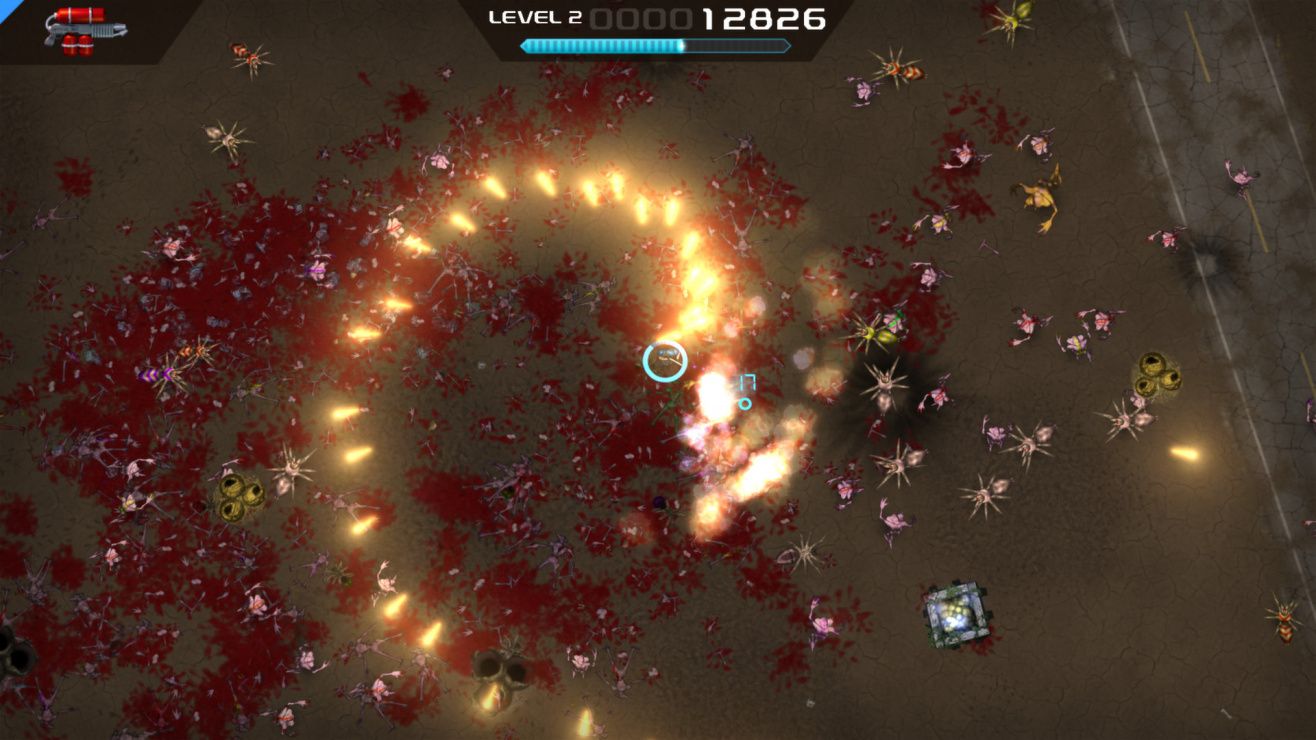 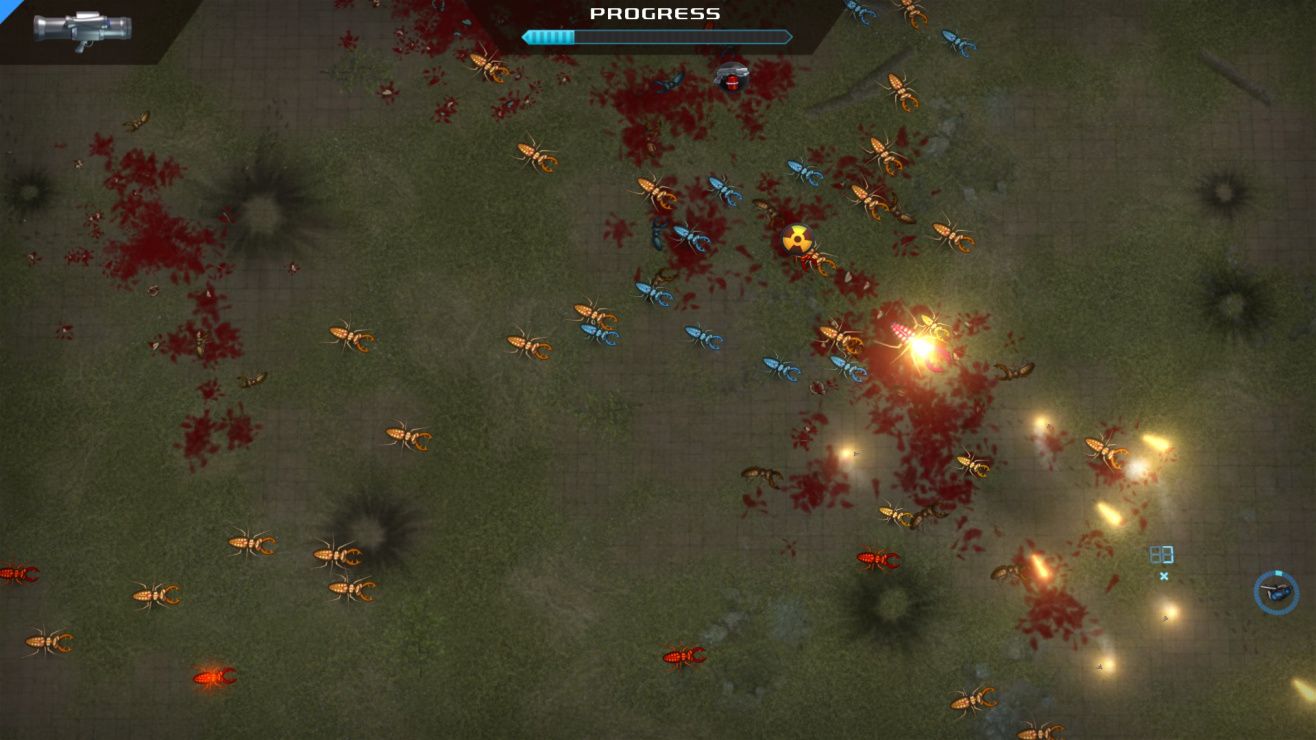 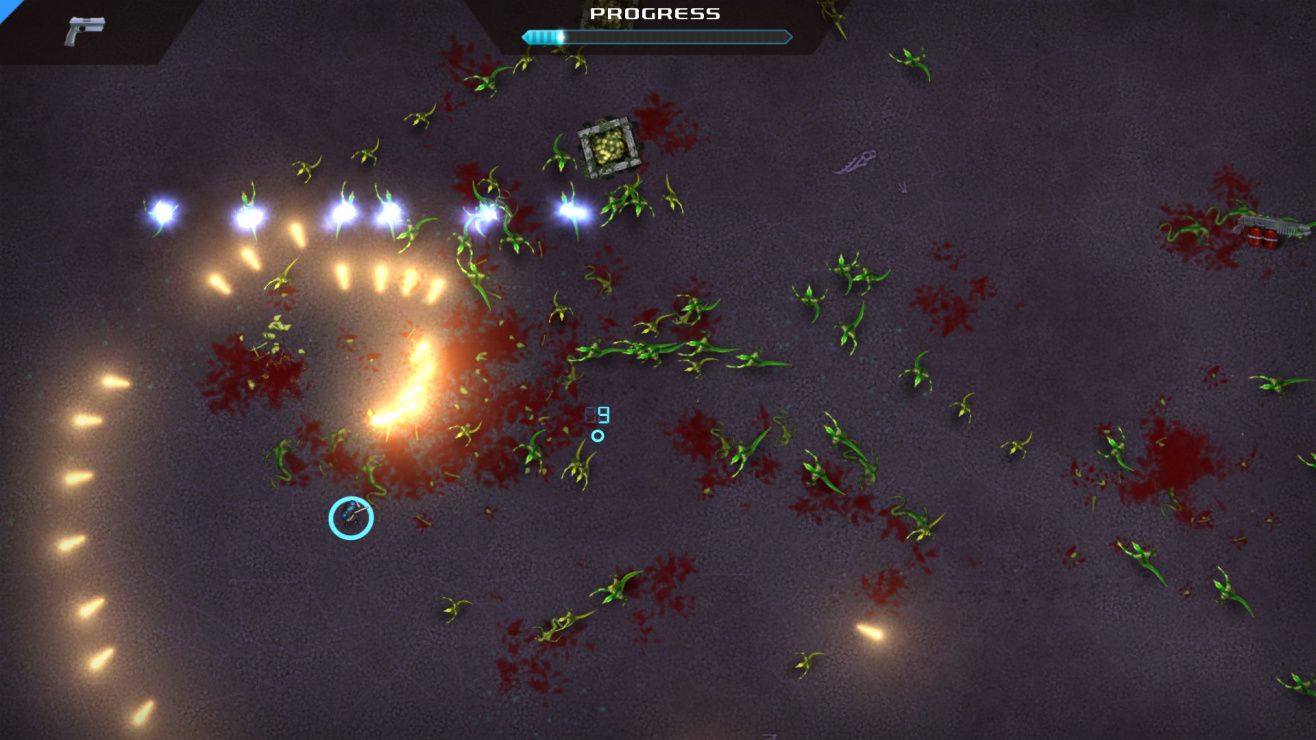 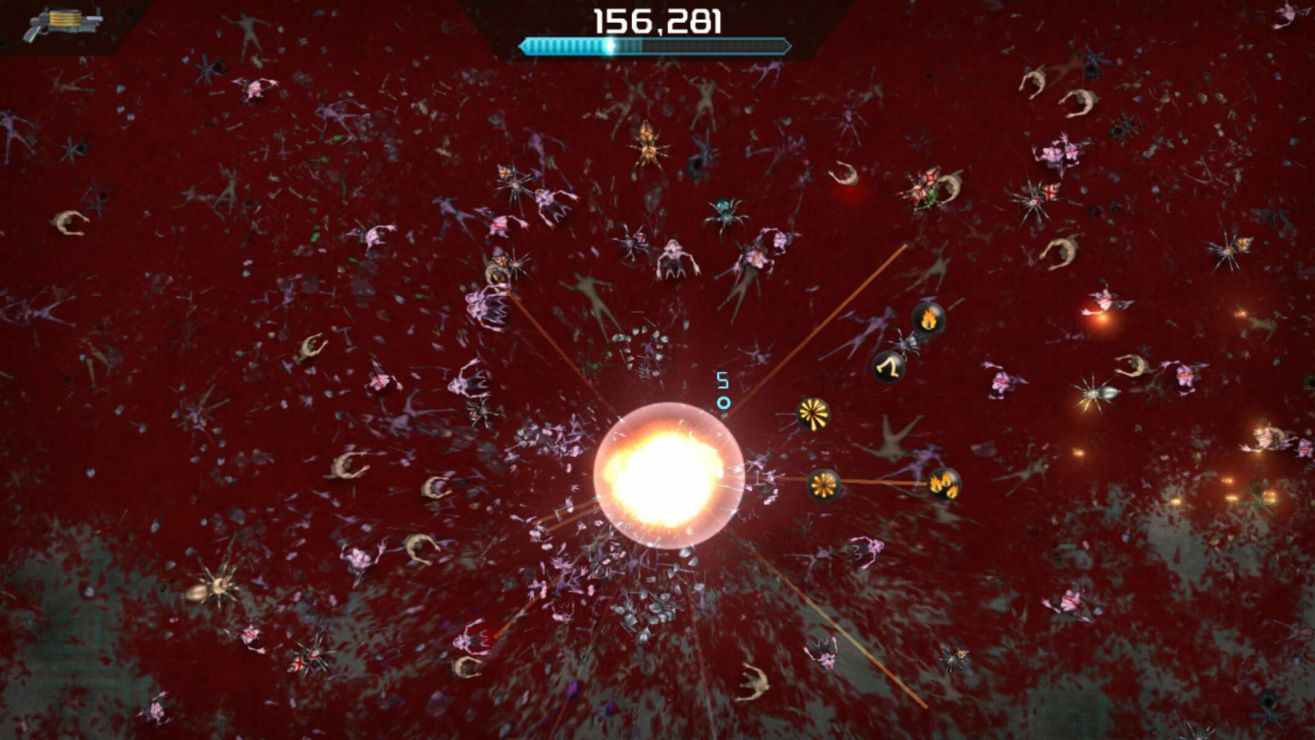 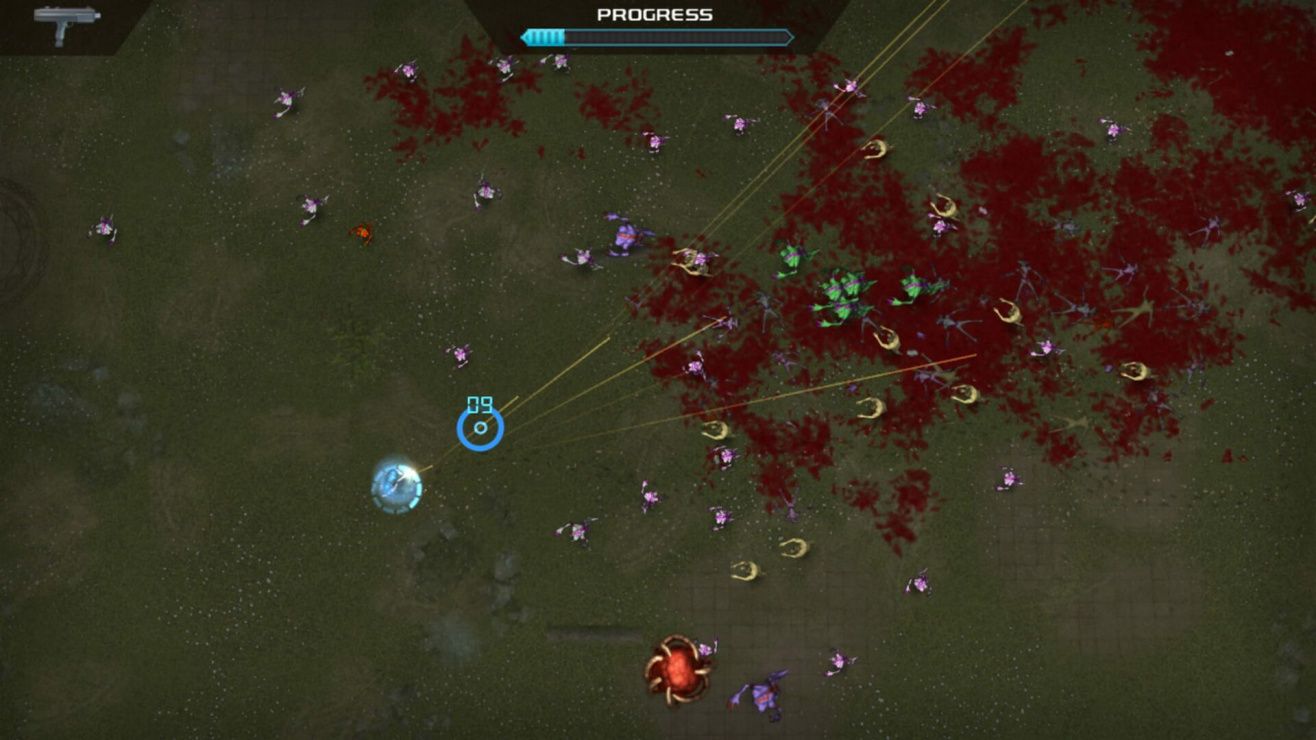 2d action classic co-op indie survival zombie
Crimsonland is an intense top-down dual stick shooter where your screen is filled with literally hundreds of aliens, giant spiders, mutant lizards, and more. Complete sixty quests to unlock an array of weapons and abilities, then unleash your arsenal in five survival modes with leaderboards. All Crimsonland game modes feature local co-op for up to four players. There are also dedicated leaderboards for co-op games, so gather your friends and show everyone who wields the gauss shotgun like a pro!
Share Share Share
Promote for 50G

Follow our curator page, Original Curators Group if you want to see more reviews like this one.
Game Summary:
Crimsonland is an aptly named twin-stick, overhead shooter, as killing hundreds of enemies stains the floor red with their blood. This is the primary focus of the game, as there's no story or rationale for what's going on. You're simply thrown into a situation where you need to blast away waves of enemies, being given plenty of fun toys to make that exciting. With no other complications to address, here's the breakdown.
Pros:
• There are 7 types of survival mode available, each with a unique twist. Unless you're incredibly good though, many of these attempts will end quickly, because the game holds nothing back. I don't find these modes very engaging due to how soon you're killed off. I know I'd die eventually, but having taken down the game on the hardest difficulty, I'd expect to put up a better fight.
• The main game mode contains 7 worlds, each made up of 10 levels, with the last level always being a boss fight. You can't skip around in the game, having to unlock every stage in order. There are three difficulty modes available, but they work the same way, requiring you to beat the game on one to advance to the next. You start on normal, progress to grim, and end on hardcore.
• There's a reasonable amount of enemy variety to fight through including lizards, aliens, zombies, spiders, crabs(?), and beetles. There's different types of them as well, such as ones that shoot projectiles.
• As you fight enemies, you earn experience and level-up. For each level-up you're given four perks to select from, get a temporary shield, and all nearby enemies are shoved away.
• The rock/metal music is just the right accompaniment for a game like this.
Cons:
• The harder difficulties in quest mode don't feel very different from normal mode. Playing the first stage on grim mode is a punch to the gut, as it's surprisingly hard. However, this is an anomaly, as following stages mellow out again. As it turns out, enemies don't take any more hits and typically aren't replaced with stronger foes, there's simply more of them. Looking at the number of kills for stage 1-4 for each difficulty, I killed 180, 216, and 252 enemies, while on stage 5-7 I killed 224, 283, and 307 enemies. 5-7 had enemy spawners, but I focused on them early each time. Assuming these numbers are typical for every stage, each difficulty increased the number of enemies by about 40?
• The perks are really unbalanced. For instance, fast reload, health regeneration, and poison bullets will almost always be worth getting. Others rely heavily on the stage or weapon you have, such as stationary reload or the laser sight. Some seem completely worthless, such as the death clock, which grants more points but kills you in 30 seconds. Since these are randomly generated each level-up, you're at the mercy of dumb luck.
• The final boss is lame, especially in contrast to bosses from earlier worlds, which seemed to be building up to a daunting final challenge. However, it's so anticlimactic that I wound up beating it with full health the first time through. Plus, it's not even thematically interesting, like a boss-spawner or the presumed source of all the problems (like an alien mothership).
• The difficulty isn't consistent. Some later world stages are rather difficult, but stages before and after those difficulty spikes will be as easy as ever. Additionally, different attempts on the same stage can vary widely, from a walk in the park to a desperate bid to survive.
• Frankly, I think the character is too slow. Some enemies are faster than you, and due to how badly you're outnumbered, you sometimes can't kill them fast enough. It's one reason the Spideroid boss is so broken, as the small spiders outrun and corner you.
• Sometimes enemies will walk in from the edge of the screen, but they often spawn randomly in the middle of the stage. There's no warning they're coming, so they can spawn right on top of you and wipe you out.
Tips:
• The weapons you're able to fight with, besides your starter gun, will show up on the map randomly, but it only shows the picture for it. You'll have to memorize your preferred weapons and know their general effects to know when it's good to swap out or if it'll only worsen your situation.
• There seems to be no disadvantage to playing with other people, as there aren't more enemies present and they don't take more damage to kill (based on 2 player coop on quest mode).
Conclusion:
Having conquered quest mode, battled through a few rounds of the different survival modes available, and left with only a few achievements to complete, I've got just under 17 hours invested into this game. I don't expect it'll take much longer to polish off the rest of the game, at which point, I don't see myself coming back for more. So, at $14 I would say the game is a bit high, especially with gameplay that doesn't change much from start to finish. Despite satisfying a basic urge for mayhem, the main downside to a mindless shooter like this is that once you run out of objectives, you lose anything to focus on and to drive you to play further. When I was younger I could have played a game like this exhaustively, but my tastes have changed since then. As long as you have a goal to works towards though the game is quite fun. Therefore, I recommend it for those in search of a challenging twin-stick shooter that's not a bullet-hell.

Overall length
4-5 hours for one playthrough, 20-25 hours for completion.


Overall difficulty
Medium difficulty. Some achievements can get annoying but with enough practice you should overcome them eventually.

Review
This game is super fun. A twin-stick top-down shooter with a crazy amount of weapons, perks and modes to play. By doing the campaign I kept unlocking more and more and that felt really good, and due to the variety in weapons and perks I occasionally experimented with them to check which combinations I like the most. While some would argue that some weapons are downright useless, I have used at least all of them once and combined them with perks to at least get some use out of them. There are some slight and weird difficulty spikes throughout the game however. Gamers who have played this game are probably familiar with the first stage on the hardest difficulty, or the almost endlessly reproducing spider boss stage. And after that, it just becomes really easy again. The same goes for the extra modes, but this only applies to achievements as they are endless modes.
Join our growing Gaming Community!
Nep's Gaming Paradise is not just my community; it's our community. My aim is to create a safe haven for all gamers across the globe from all ages, looking to meet new friends and talk about their favourites hobbies. No politics, no religion, just a place where fun can be shared with many people sharing the same interests as you! Content creators such as Reviewers or Streamers can further benefit from our group and Discord to promote themselves! Join our Steam group now, which also includes links to our Discord, Youtube, Twitch and more!

Playing this game since late 2000's and never got bored once!

Nice little top-down-shooter, but too expensive for what you get. Buy it when it's on sale

A solid and addicting top-down shooter; the creative perks keep it pretty interesting. I come back to the vanilla and blitz survival modes from time to time. Only complaints are some of the survival modes aren't very good or won't keep you interested for very long, difficulty spikes in the mission mode, and some imbalanced weapons. Oh, and the game has some nice tunes as well.

blast stuff, get powerups, blast more stuff. What's not to like?