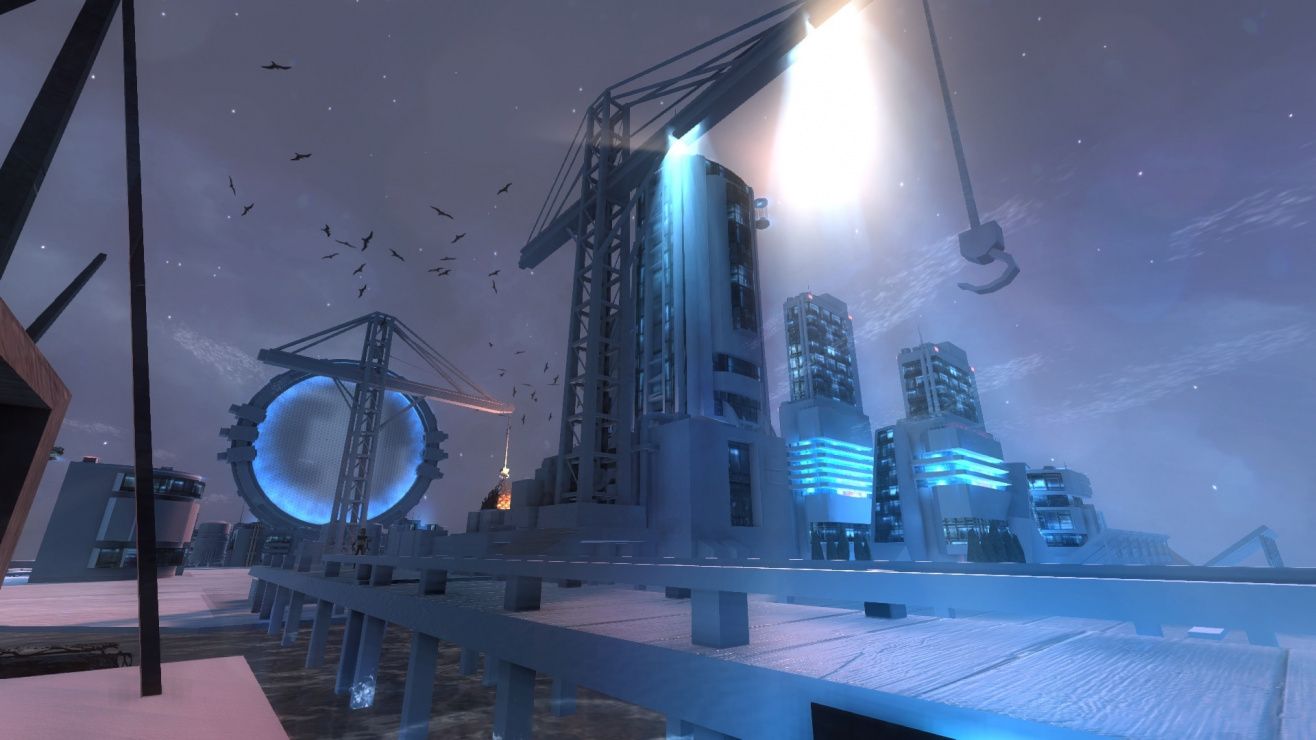 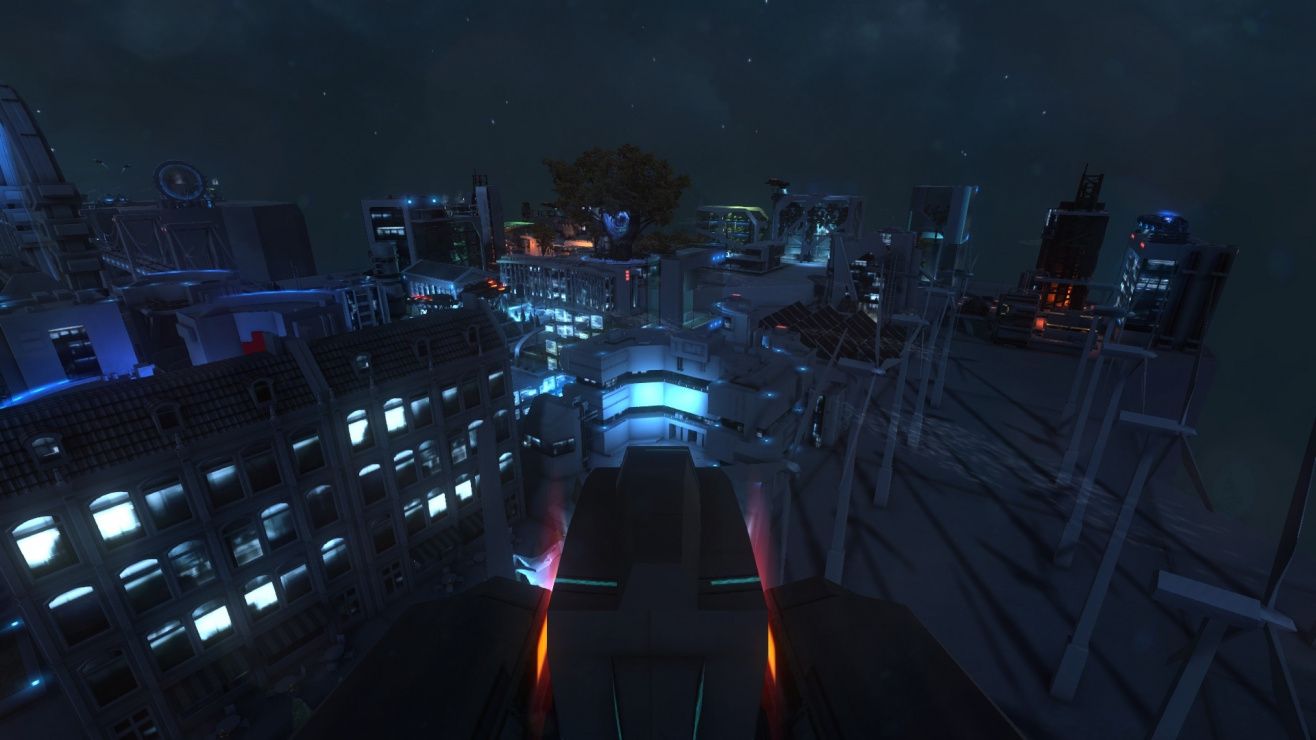 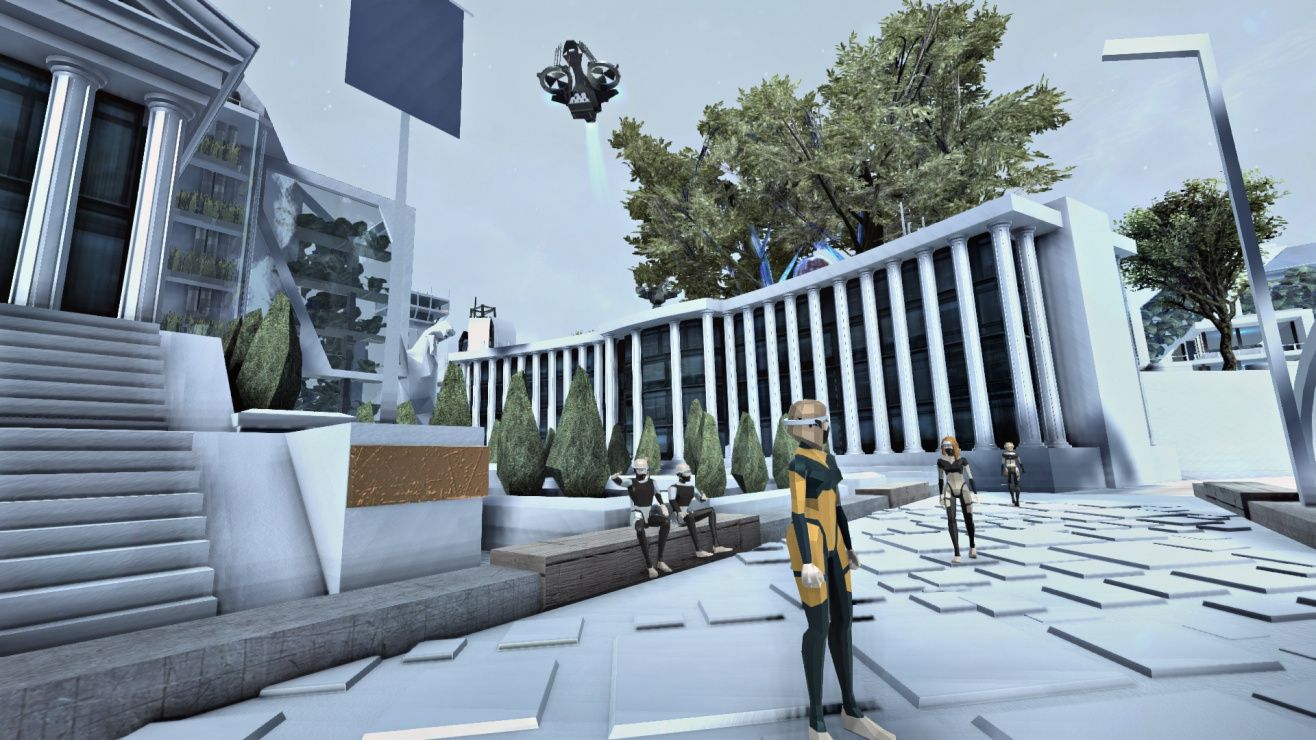 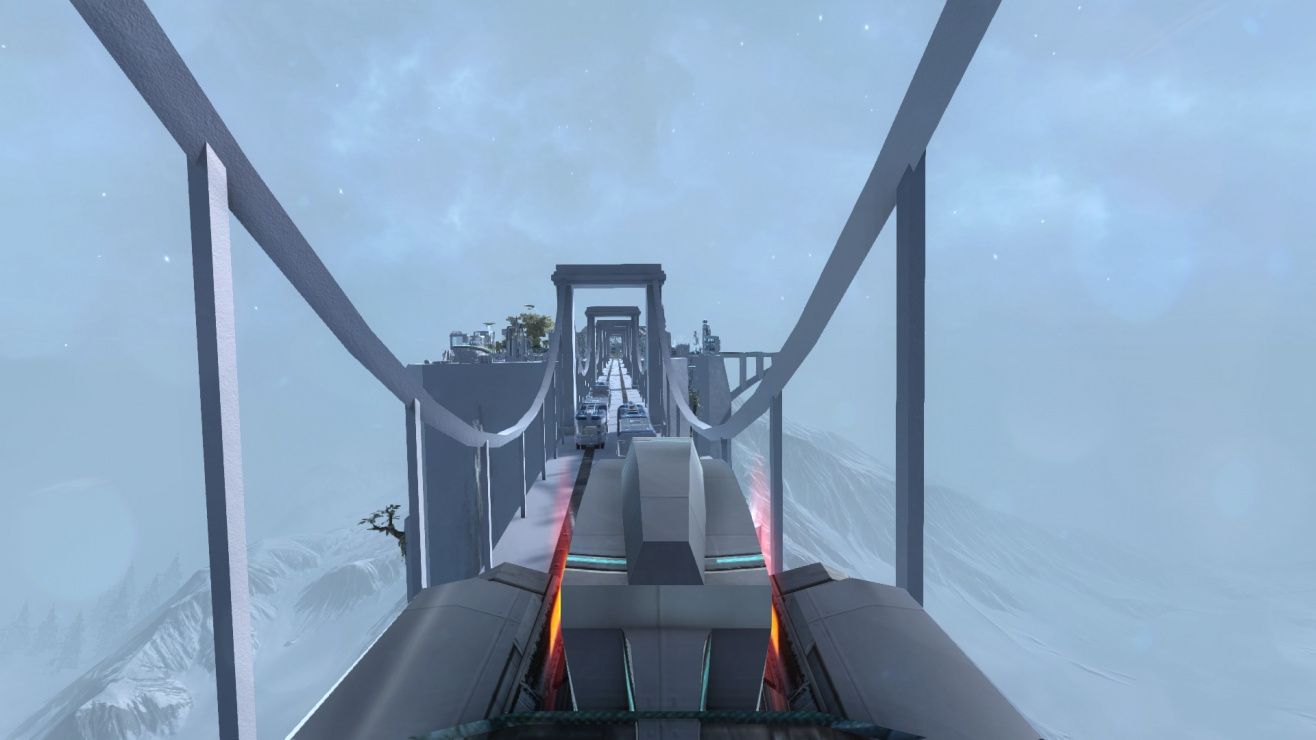 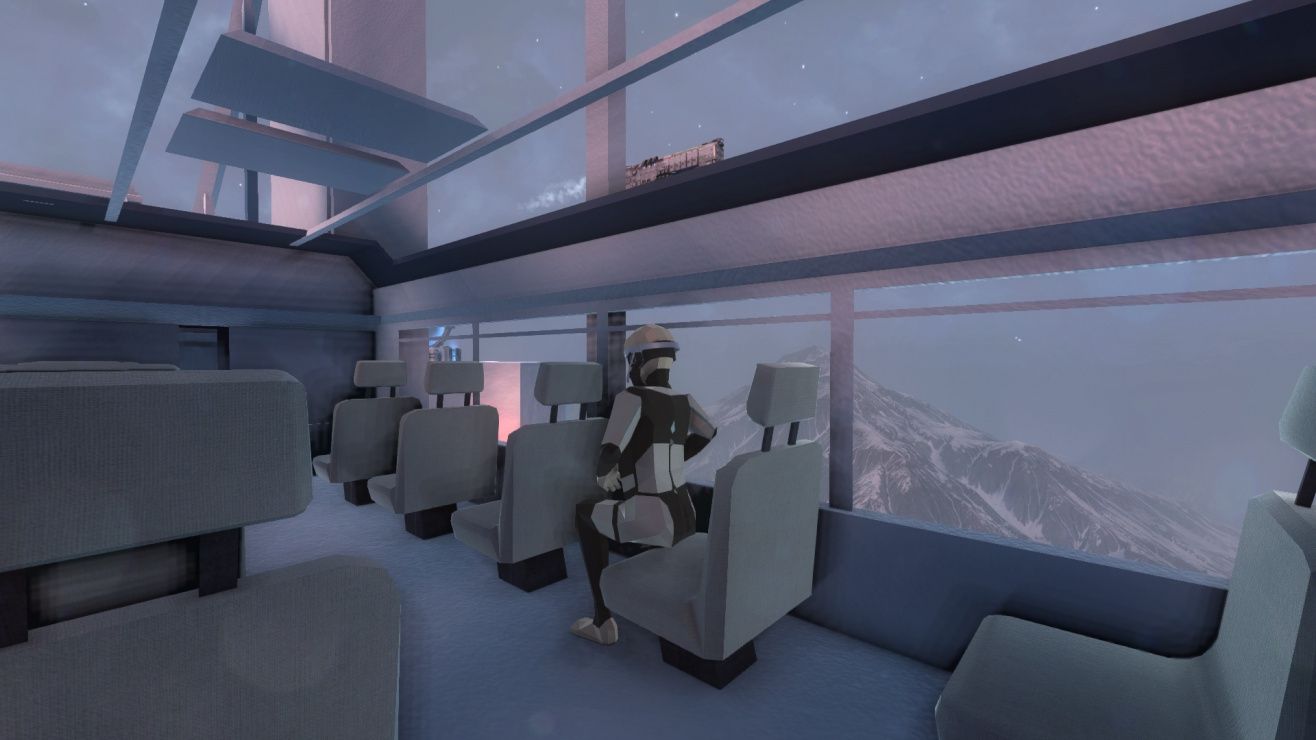 PC Steam strategy sci-fi simulation management city builder colony
Message for survivors on the Earth's orbit! After a nuclear war life on the surface became impossible. A 300m thick radioactive fog covered the Earth. Our scientists in the past decade predicted such course of events and used all available potential to build cliffs in the mountain region to restore life on Earth. We are looking for bold active people to manage the process of restoring life on Earth. Join! - develop in parallel the economics of several independent cities - trade between your cities and the orbital station - a dynamic climate change that will test the strength of your cities' economies. - choose between ecological and harmful power supply - 48 additional university researches to improve the city structure - over 120 structures for constructing the city - 15 goods for trade and consumption - possibility of switching between the 3D and the orthographic camera, as well as a free camera for walking around the city. - additional 15 quests that open access to orbital station and huge location in lategame - sandbox mode - tower defense more The compact gameplay involves the construction of three small cities in each randomly generated level.
Share Share Share
Promote for 50G

Someone obviously loved this, and put a lot of hard work into it. It shows. Overall the game is fun. There are some significant flaws, but they can generally either be overlooked, or worked around.
Positive:
- Visuals and 'feel' are well done
- Resource management is fun, watching a city grow up from nothing is great.
- Although thin, it has a plot and advancement in this plot feels rewarding.
Negative:
- Events need serious work: the game will give you objectives that are physically impossible to complete with what you have, then punish you when you fail to fulfill them. These can be turned off, which I did.
- At times, the game can feel samey/grindy. Once you have a well-balanced setup, it can be a matter of accumulating enough (item) to proceed. At one point, I got tired of waiting, and literally went out to do errands while the meter finished filling.
- At times, the mechanics of the game are not clear and you have to learn by trial and error. Use more than one save file!
- The English in the game is iffy.

One of the Best
If you like Anno and Frostpunk (and don't like Banished, Cities: Skylines, etc., because they are boring) this one is for you. (And don't let that first-person section of the advertising video fool you -- the game, from the usual playing perspective, looks great. Opening the video with that was just a poor advertising choice.)
The basics:
Cliff Empire let's you build a self-sustained Utopia on top of stylish man-made cliffs, while always having to plan your next steps carefully as not to unbalance your production, consumption and number of citizens.
Each of your 3 cliffs is considered an independent city, with separated economies, so you have to trade between them while struggling not to go bankrupt, specially on your most recently "colonized" one. You can loan cryptocurrency (with interests) from one cliff to another, though.
Disasters will constantly hit your cities, potentially ruining everything unless you built them to withstand anything the game may throw at you (or scramble to rearrange buildings as they happen, likely taking a big hit to your economy). Disasters will start happening as soon as you either finish or skip the tutorial (which is just a series of objectives, and shows up every time you start a new game). Until then, you are 100% safe -- which means you can fully build your 3 cliffs, with no disasters to set you back, as long as you don't finish the tutorial (tip: its last step is to build an office, so... don't.)
Even if you "cheat" the disasters (which I did), the game is neither over nor does it get stale, because...
The awesome:
They put a lot of cool stuff in this game besides the setting, the structures and how everything works. As you survive disasters, you gain Honor Points and, as you accumulate these, unlock new buildings. And... other stuff. I'm not going to spoil any of it, but there are some really cool things in there that I wasn't expecting at all.
And the time you see up there is how long it took me to finish a single playthrough -- 58.8 hours. Frostpunk and Anno both took me around 40 hours to finish. So that's 50% beyond the "greatests," and I never really got bored during that time (sometimes you have to wait for stuff to happen, sure, but then its still cool to just keep staring at everything working and fine-tuning things up).
The bad:
I think it's fair to say Cliff Empire is, technically, still in later beta stages.
-The game's english is the worst I've ever seen. Nearly everything is wrong in one way or another. Sometimes, you can't even understand what something does by reading its tooltip, because it simply makes no sense. It's hard to understand how they made so many hard stuff work and screwed up on the easiest thing of all (if you can't find people to help you translate the game, just hire a translator. They usually charge the soul out of their clients, but there is relatively little text in CE);
-The sounds and voiced-warnings are perfect. But the cutscenes are not voiced. They already had to hire an actor to do the warnings, why not voice the cutscenes as well? They're really short;
-The UI could be a little better;
-Sometimes the 3D Printing Factory's UI gets completely messed up, showing your stock of food and etc. in it, mixed up with the rest;
-A few drones will often appear frozen on top of storages or in front of trading portals. All your drones are still working normally, but these sprites are stuck there;
-One advanced construction that auto-connects to one another when you build two or more close together does so in weird ways. It just looks... wrong (and is);
-There's no ending cutscene. You finish the last objective and... nothing happens. (There's a small chance I missed it while taking a short trip to the kitchen, though. But I doubt it.)
As you can see, it's nothing major, nothing game-breaking. But some of this stuff you don't see in finished games, and they should really have ironed it out before release -- it's nothing that hard to fix.
So... it's a bit weird. They nailed everything that matters, all the really hard-to-do stuff, and screwed up hard on some of the easiest things. It doesn't make sense, because with a little extra work it could all have been fixed before release.
In short:
Cliff Empire takes Anno's resource/trading complexity and simplifies it. It also implements some of Frostpunk's brilliant ideas very well, although not so... stylishly.
It's fairly complex, economically challenging and, most importantly, fun. For longer than expected.
Despite some minor (and weird) flaws, it's a great game. Cliff Empire's developers had some great ideas and did a very good job implementing them.
The only way I can see anyone regretting getting this game is if they either hate city-building (then I have no idea why they'd be reading this in the first place) or if they don't stick to the game long enough for the cooler stuff to start happening (the game is perfectly fine until then, but the "extra" stuff is what really tips the scales, keeping things fresh).
Buy it.

IMPORTANT
Update: Dear devs, sent this announcement and the game is not dead! They have an expansion in work for the game, named AI Olympius, sounds cool!
Sadly, The game is not updated for a long time and is likely abandoned by the devs.
Although the game didn't receive updates for a long time, it is still playable and good.
Review
I bought the game quite some time ago. It is fun and challenging and makes you use your brain for space and economic management.
Sure, it has it's own flaws and bugs but the content you can get for price is relatively good.
Overall aesthetics of the game is nice. Gameplay is a bit tricky to learn, so don't expect a first try victory. Most of the times the game is punishing but as you learn the mechanics of the game and sort out your mistakes, you can sit back and enjoy the view of your little cliff empire.
Luckily, this game supports mods but not through Steam Workshop, You can do it manually. Check this official thread for any news on mods:
and this profile for the mods he/she made for the game!

Cross between Anno 2070 & Banished. It's a micro city builder with a good sense of economics / trade balancing and very interesting building options once you've earned enough "prestige". Highly recommend if you're into casual games that require a bit of patience.

A fun city builder.
You have limited space on a rock, and you gotta survive the elements and the pirates in order to win. As you progress you unlock better buildings as well as more places to build. By the end you'll have 5 areas that you may even specialize in terms of production. The fun factor tends to drop off late game when you've already "won" and nothing can really destroy your colonies, but it does turn into a full fledged city builder at that point so what the hell, give it a shot.
Honestly for this price the game is definitely worth the money, and if you get it on 25% sale or more, I may even go as far as say this is a must buy.
I don't know what the situation is with the game, if it's abandoned or whatnot, and I don't really care. What's on offer here is stable, and is packed with enough content to warrant the asking price. And honestly I don't see what else could they add to this thing, there's plenty of stuff as it is.