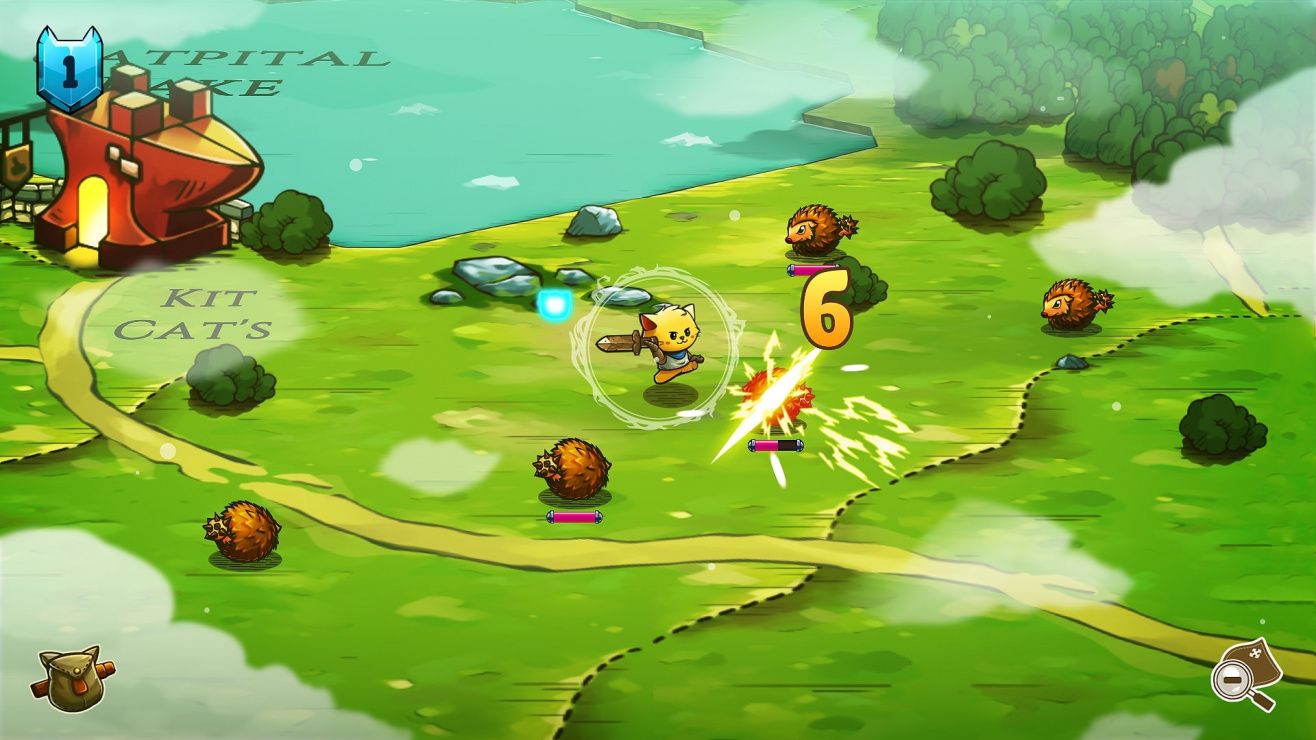 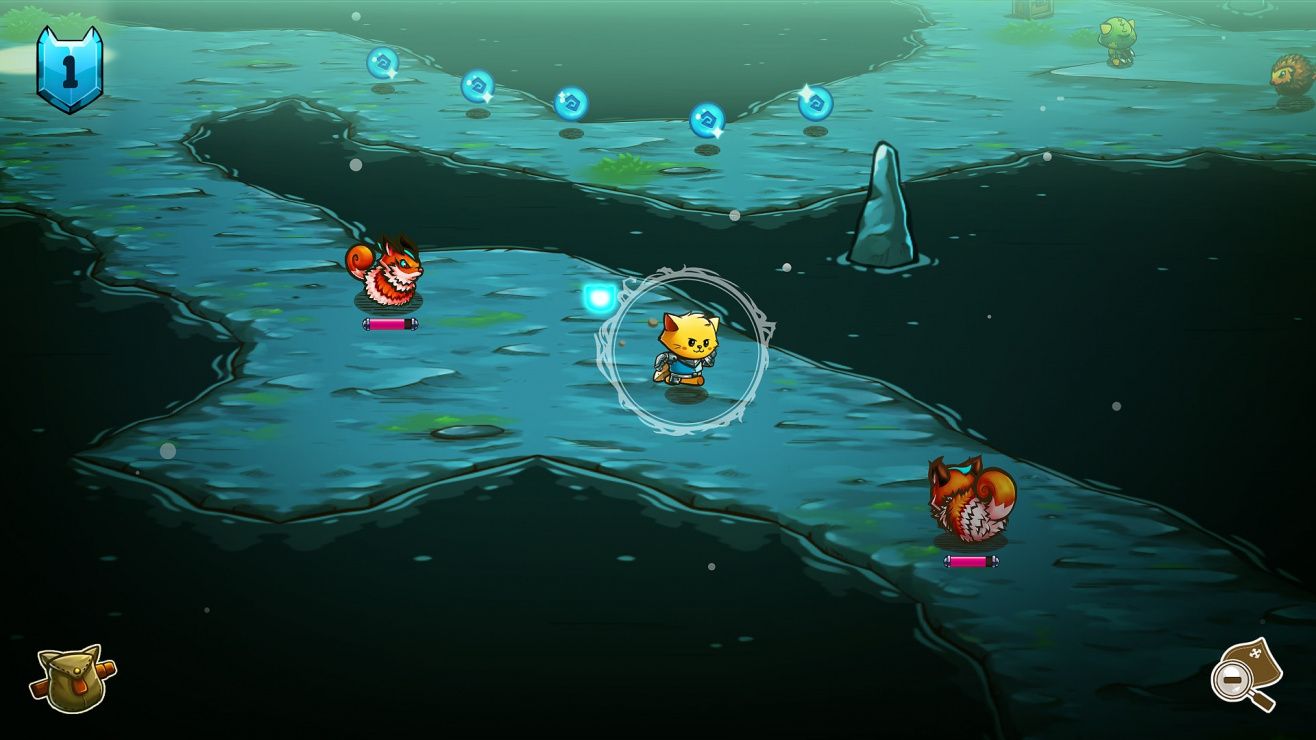 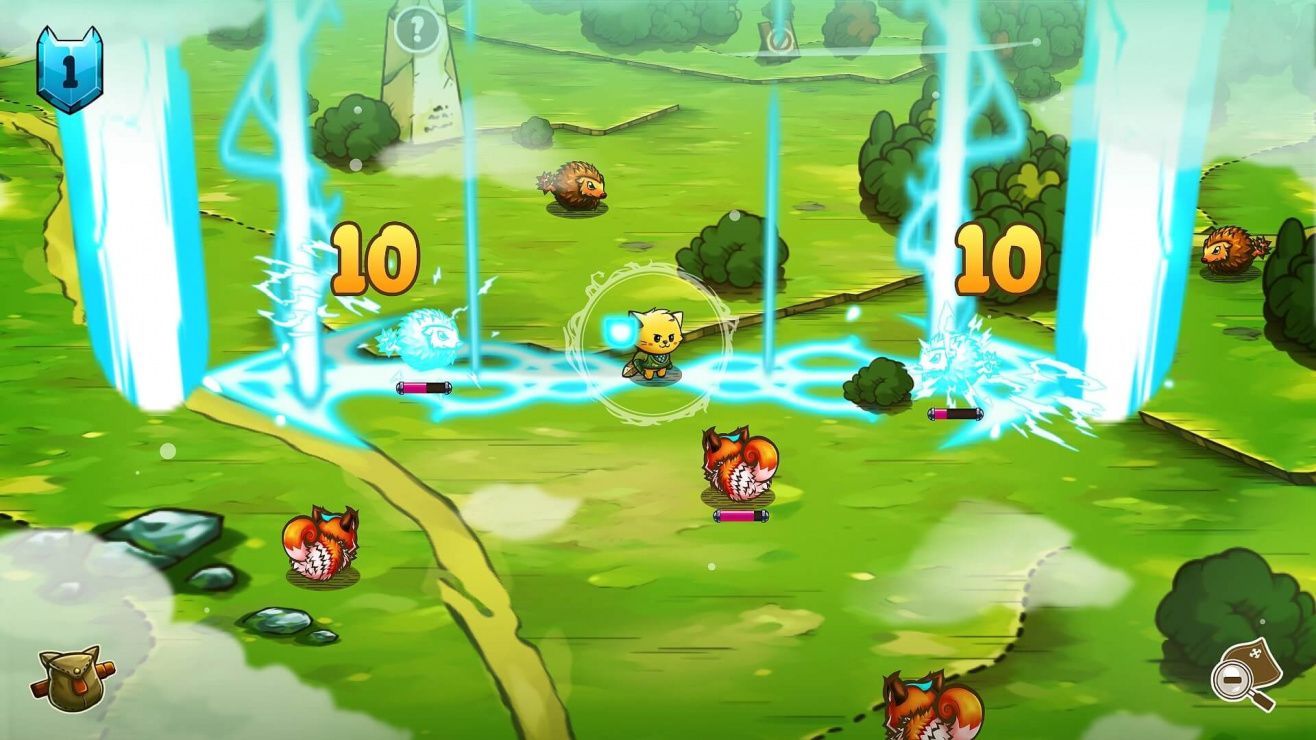 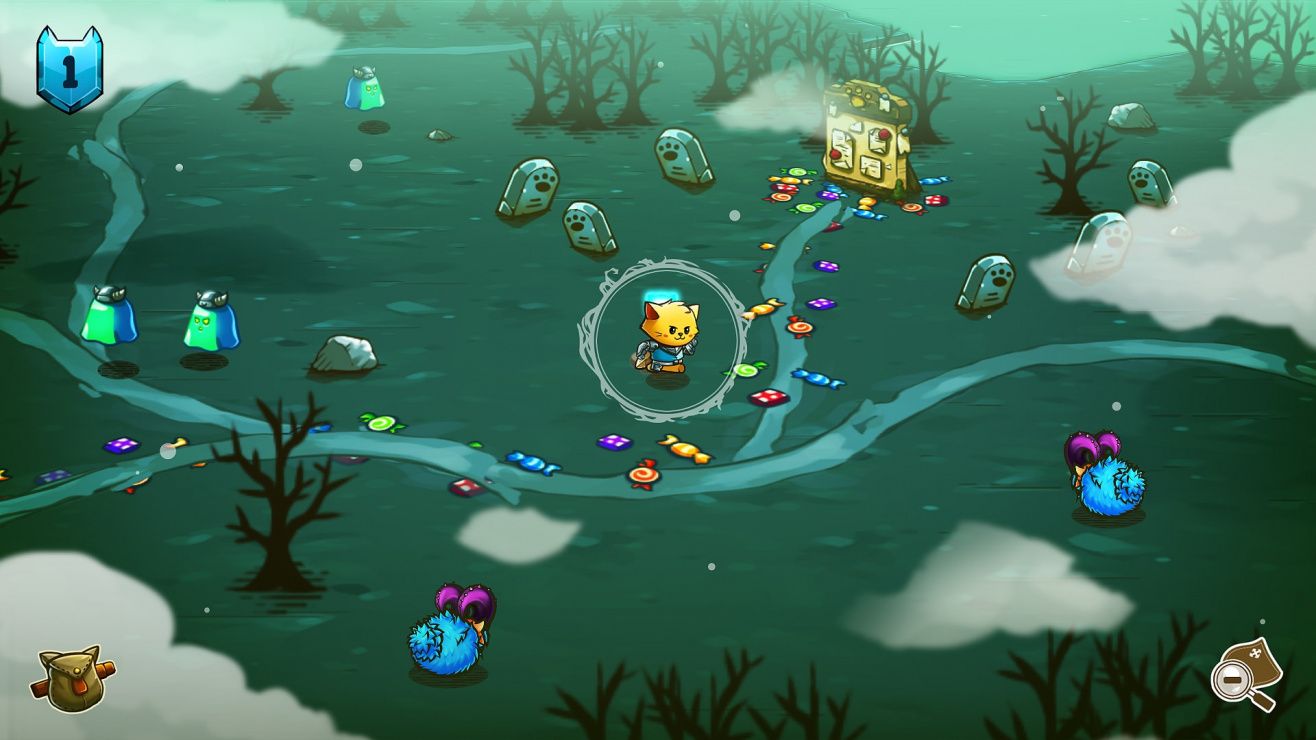 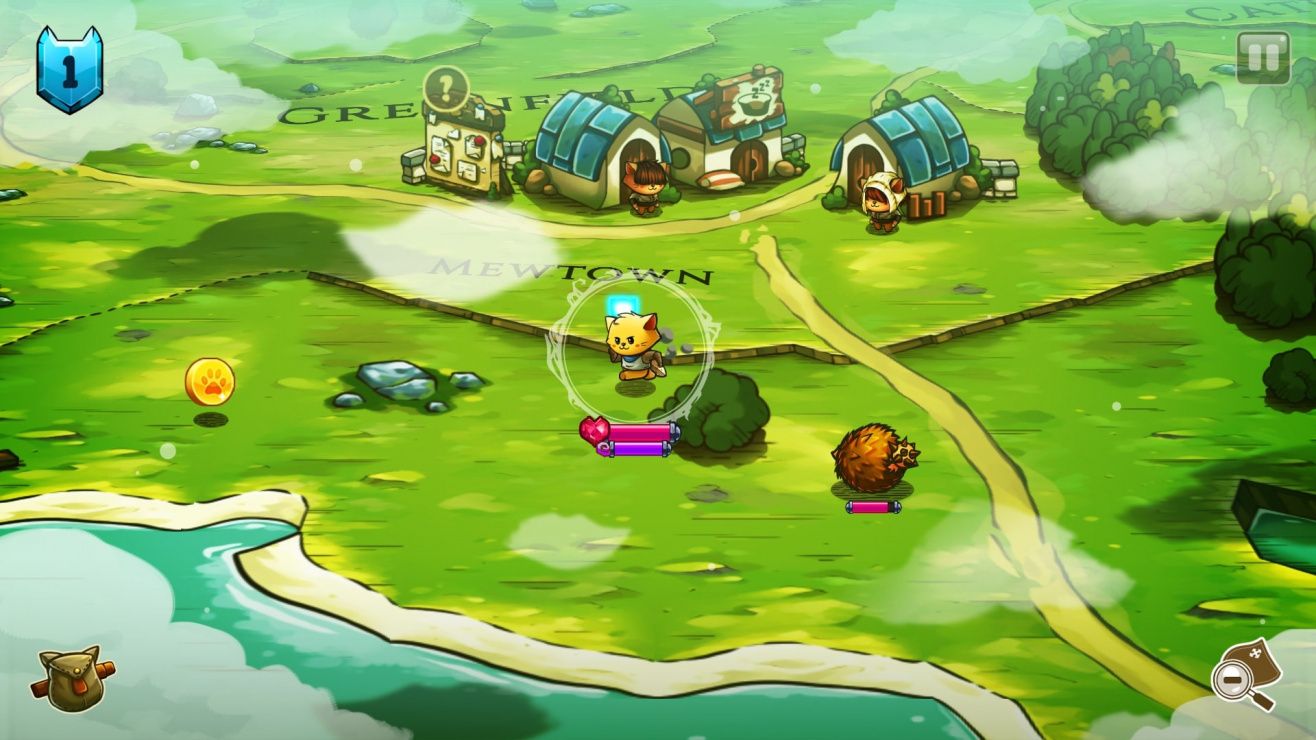 PC Steam Console Playstation action indie adventure Nintendo rpg multiplayer fantasy casual iOS Android Google Play open world cats
Leap into a grand adventure in purrsuit of the evil Drakoth and your catnapped sister! Explore Felingard's huge overworld map, risk life and limb delving into dungeons for epic loot, and lend a paw to a furry cast of characters in a flurry of side quests. Combat in Cat Quest takes place entirely in real time, allowing you to get close to enemies with a slash of your blade, dodge roll to avoid a counter-attack, and then finish them off with powerful magic! Wield the ancient spells of Lightnyan, Flamepurr, and Healpaw to vanquish your foes!
Share Share Share
Promote for 50G

The Good:
Simplistic old-school rpg. A Skyrim like catventure.
Lots of cats that need your help in Felingard (= 62 side quests).
Visit furbidden places. Explore dark caves (= 52 dungeons).
Furry nice selection of armor / weapons (= 66 armors / weapons).
Overal pawsitive vibe. Relaxing to play after work.
Good sounds and mewsic.
Runs nearly purrfect on older hardware / APUs (played on an AMD Ryzen 7 4800U).
The Bad:
Unfurtunately combat, quests and gameplay get repetitive quickly.
Could use more variety (e.g. traps, biomes and enemy types).
Lacks the option to bring a pawtner / furend into your game (= online co-op).
After playing for a while, you add cat puns into your everyday conversations.
A lot of places to catnap. Purrhaps a bit too easy for the first playthrough.
Can't rebind keys by default. Can only select 4 magic skills at a time.
The Verdict:
Pawsome cute little rpg for younger kittens and old cats alike. Why not pick it up right meow?
Score: 7.5/10 paws
P.S. Every positive paw of this review may save one kitten. :)

ABOUT THE GAME AND RECOMMENDATION:
Cat Quest is essentially an extremely simplified and streamlined version of top-down action role-playing hack and slash games. It is designed for people looking for a relaxing and casual gaming experience.
I personally had fun with this game so I would wholeheartedly recommend it.
PROS:
+ Beautiful and adorable art style
+ Fast and fluid combat (melee and magic) complemented by smooth animations
+ Good music and sound design
+ Open world map that encourages and rewards exploration
+ Unique item system where, instead of getting new gear of the same type, your current gear gets upgraded
+ Great magic/spell mechanic that makes all spells equally useful regardless of your chosen playstyle
+ Due to its simplicity, it is a great game to introduce relatively young players to top-down action role-playing hack and slash games
+ Runs well even when played using old hardware
CONS:
- Gears purchased from shops are entirely RNG based (i.e. like the gamble stores in Diablo and Torchlight), purchase or sale of specific items is not an option
- Your characters’ class, and your gameplay, is based depending on your gear (normally I would not have issues with this but considering the CON above and below, it does become a problem)
- GRIND GALORE; to get the best possible equipment for your preferred playstyle, be prepared to grind for gold
- Audio bug that may require you to validate the integrity of your game files every time you load up the game
- Quest types are limited to mostly fetch quest and search and destroy missions
NEUTRAL:
+/- Easy to learn and understand gameplay (although it becomes repetitive after a while)
+/- Adequately lengthy campaign, albeit with a cliché story
+/- No online co-op (thought the sequel game Cat Quest II has one)
+/- Cat puns, a lot of cat puns
---------------------------------------------------------
Like my Reviews? Follow my Curator's Page:
Miyumi's Review Corner (MIRECO)

Holy Crap this is GOOD.
Kind of open-world-ish Action RPG (no turned based battles here!) but with dungeons, quests, some sort of storyline, LOTS of gears to loot, LOTS of dungeons to crawl.
And the best part: THERE'S A ROLL BUTTON
HELL YEAH THIS IS CAT SOULS
Right now i've just cleared a lv60 dungeon as a lv25 all because of that dodge button. Learn the patterns of each enemy, some have a fast attack at the beginning, some dont.
Also if an enemy is strong against your sword, then it's probably weaker to magic and vice-versa!
Dress up your cat, try out all gears! Everytime you find a REPEATED GEAR, it UPGRADES YOUR GEAR INSTEAD
Shit's amazing.
And for bloody's sake when you're around lv15/17, do the blacksmith subquests, after the fourth one she gives you an unique armor that will help you on your endeavors.

Cat Question is an action RPG that's cute and contains a lot of cat puns.
The combat is simple, fun and satisfying. Attacking enemies restores mana which can be used to cast spells for healing, damage or attack buff. The enemies give a visual indicator for how large their range is and how fast they attack so you can dodge out of the way. Some enemies will be resistant to physical or to spell damage.
The quests are your standard go there, kill that or collect this. The game will offer you skills for faster map traversal as you progress the main quest. There's plenty of side quests and dungeons you can explore and buying equipment at the blacksmith comes in lootbox form, spend gold to get a random item. Getting an item duplicate will increase that item's level and stats, so you won't need to worry about inventory management.
The story is light hearted, has plenty of different game references and lots of cat puns. It surprisingly has a twist ending.
For achievement hunters:
Collect all the weapons and armors, complete all dungeons, side quests, reach level 99 and complete the game 4 more times (you can stick to main quest only) on Mew game plus for Furry Armored and The Old Master

Tl;dr, Cat Quest is scrumptiously pawsome. Unless you don't particularly like cats.
In this sexy kitty dancing...no, wait, wrong game, scratch that. In this furry...aaargh...scratch three. In this bright, colorful, light action RPG you play as an unnamed cat Dragonborn, erm, I mean Dragonblood, the only cat species capable of slaying dragons and saving the world of Felingard from destruction.
Visuals, sounds, music, even the combat sounds are all cute, charming, fuzzy, warm and simply cattastic. All the animations are very fluid, character designs are smooth and imaginative and the overland map is adorable and a joy to traverse. Catnap animation melts the coldest of hearts.
The game is simple, fun, easy to pick up and play, but sufficiently difficult if you want it to be, with lots of silly side quests that, among other nutty things, include a French cook kitty, an entire village of meat loving cultist cats and a moustachioed sailor kitty that seems ready to yell aarrgghh! and hunt some whales. It's also full of cat puns, satire and references to a gazillion things. It sometimes goes over the board, breaks the walls and goes meta, but it's more a hit than a miss.
The story, along with saving Felingard from dragons and an evil kitty named Drakoth has you searching for your sister. It won't exactly imprint in your memory, but it does have a few nice twists. Along the way, you'll meet a rather goofy and laid back cast of characters, but that's the overall vibe of the game, so it suits it nicely. You'll find a solid amount of lore by exploring, looking for secrets and doing side quests and that will slightly expand the backstory and keep you invested a bit more. And you'll also have help from an overly talkative, floating, blue fairy...erm, ghost cat. Yes, a floating blue ghost cat.
Combat is a basic, but satisfying hack'n'slash/dodge affair, supported by a few different spells. Your melee attacks also restore your mana. Enemies have clearly telegraphed attacks and spells, but don't be fooled into thinking that makes the game easy. You'll find yourself outscratched if you're underleveled or not paying attention. Good thing there's no penalty for dying in the normal game. You just take a catnap and awake at the last cat & breakfast you rested at.
There's loads of equipment you can sniff out, get from quests, earn by defeating enemies or gamble from Felingard's resident blacksmith. You can equip three different items, weapon, armor and helm and they all increase your stats by a certain amount. Most of the item combinations also form sets which all look delightful on your kitty. Item drops are random, except for a few boss ones. Every item is also unique and the game has a neat mechanic of upgrading your item level when you find or gamble a duplicate.
Side quests for levelling are plentiful, but there is a slight hairball here. You can only do one side quest at a time and if you want to do a different one, you have to abandon the one before it. It's not that big of a deal, quests are short and even without any fast travel, the map is not that large for this to present a serious pawblem. When you zoom out the map, there's no way to scroll it, but between your floating blue companion and quest markers, you won't have any issues finding directions or where to go next. If you rush through the main quest, the game stays playable after it.
Finishing the normal game unlocks Mew Game mode. This is where it starts to get interesting. You have different modifiers, including a 9 lives one, to make your game harder and these come as really nice challenges for your catflexes and powers of observation. Completing Mew Game with one, two and three modifiers unlocks a special armor set and a weapon that get transferred to your normal game.
Cat Quest is not a deep, complex RPG and it doesn't need to be. It's a well made, fun, enthusiastic small game with a lot of heart. And cute cats, let's not forget cats. All the issues it may have can be easily overlooked, smiled or purred at. Even at full price, it offers a good amount of hours and it can often be found on sales.
Take a peek inside the Cabinet of Curiosities if you like to walk off the beaten path and only sometimes return to the main roads. You might find something worth exploring. And if you do, thank you for the visit.
Follow the Average Achievement Hunter Curator for reviews and useful information on Steam achievements: Very straightforward achievements. Mew Game ones can be a bit of a challenge, but with a little practice should not be troublesome. You can find good guides on Steam.