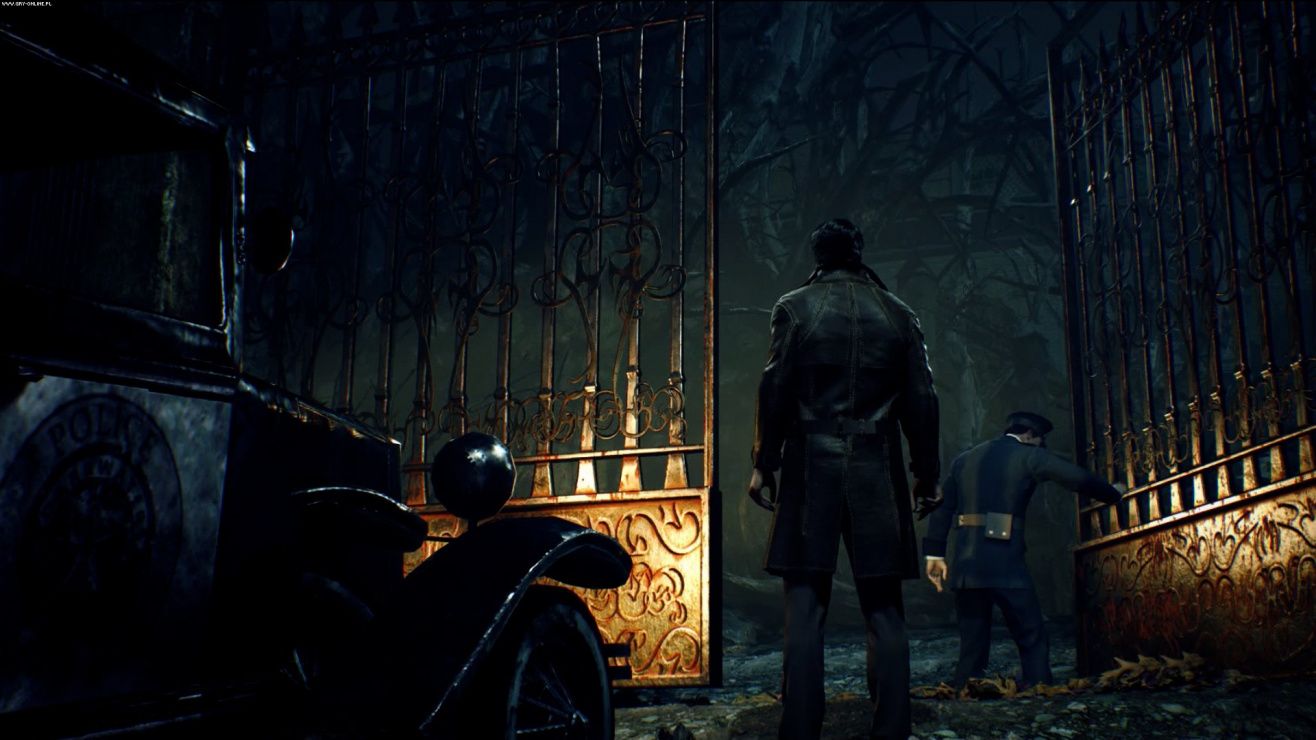 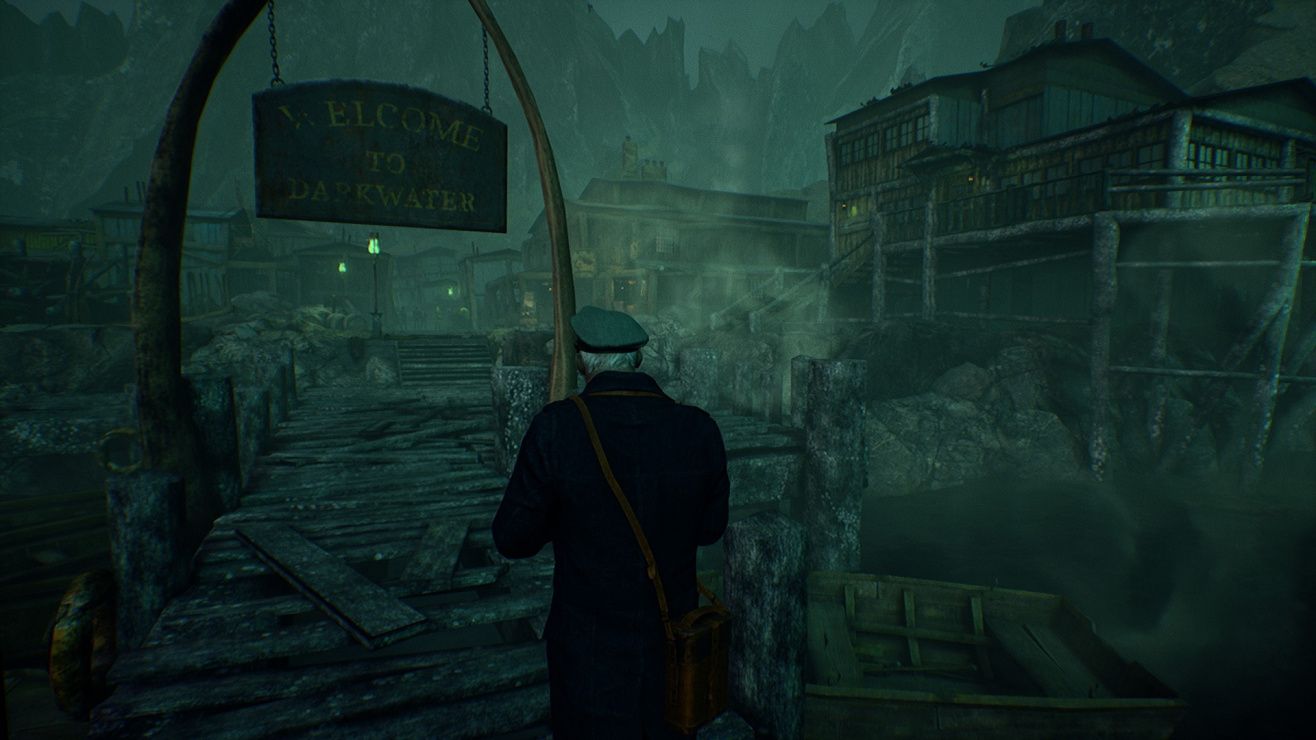 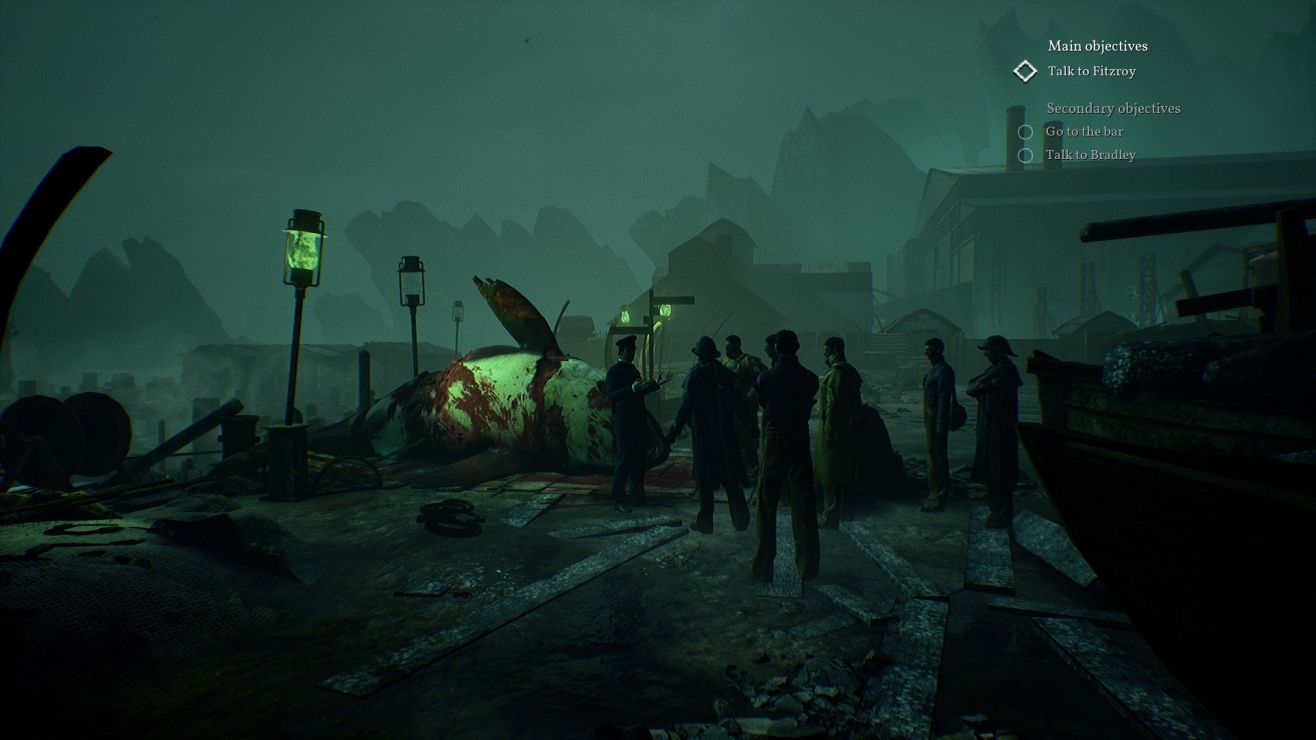 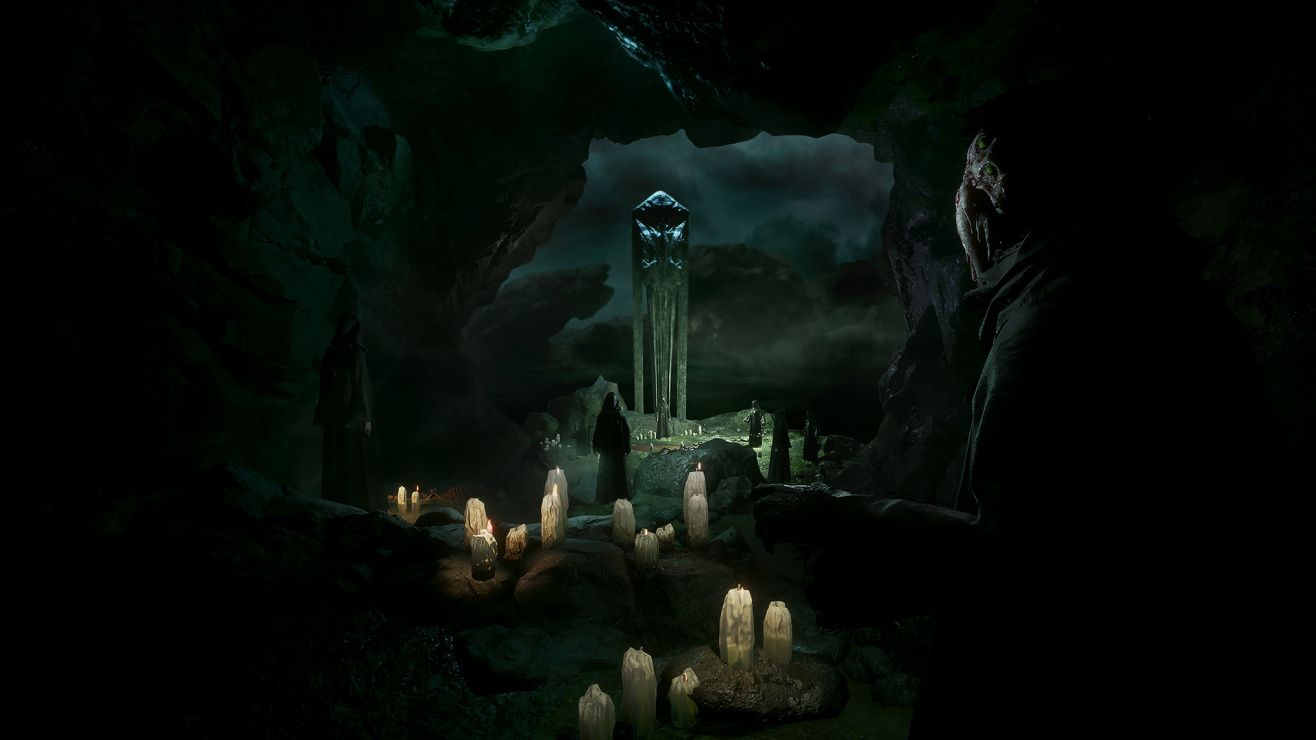 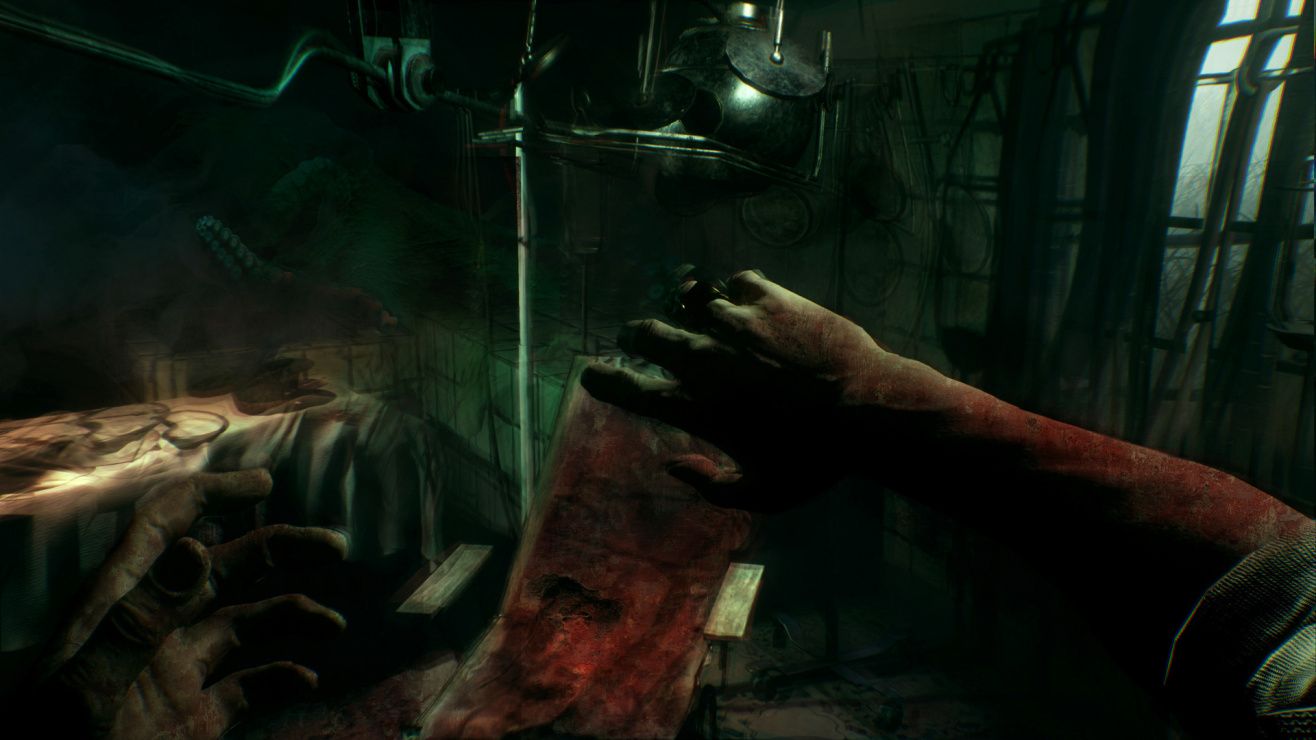 This is a game for all pencil and paper CoC (Call of Cthulhu) fans (RIP Greg Stafford). It really captures the fear and madness well and has some light aspects of the RPG such as Spot Hidden, Occult etc. The game is more of a walking sim but rather than a ton of readables or audio logs, the game’s story is driven through dialogue and scene investigation. There is plenty wrong with this game but I think the good outweighs the bad and overall Call of Cthulhu deserves to slide its tentacles into your library.
_________________
PROS
+ feels like a pencil and paper game. I loved the old school feel of the CoC Chaosium role playing game brought into the digital medium. You wander around talking to characters, some who are very tropish or stereotypical, you spot hidden to find old newspaper articles, you investigate murder scenes and work out the terrible truth behind Darkwater Island and the history of its inhabitants.
+ sound. The sounds are really great in this game. Everything from the groaning of wood to the clicking open of the Zippo lighter is very real sounding. The music gets a mention too but sadly there are large parts of the game which are empty.
+ story. Cultists….check
Insane asylum…check
Newspaper cuttings….check
Overpowered monster encounters….check
Creepy mansion…check
This game has all the trappings of a CoC roleplaying adventure and the story is gripping. Investigating scenes and piecing together the story was a great vehicle to move the story along.
+ primary character voice acting. Pierce is well voiced but it seems like they blew the budget on him and the rest of the voice acting suffers for it.
+ into the mouth of madness. There are some really great touches to the role of SANity in the game. I especially loved how if you are in a confined space you suffer from intense claustrophobia and the walls around you will warp and breathe and close in on you. Your pulse will quicken, you will whimper and eventually you will scream. When the game prompts you to read a book on the dark arts and asks are you sure? Suddenly you are confronted with a sharp stab to your brain when you realise that monsters are real and may even walk among us.
+ nice dialogue wheel. I hate these things. At least with Mass Effect you knew one was a good way and one was a rogue way to take the conversation. But they evolved into this kind of crapshoot where you thought you were doing the right thing but then totally stick your foot in your mouth. Call of Cthulhu’s dialogue choices are, for the most part, on the level and don’t suddenly cheap shot you.
____________
CONS
- open your mouth, Pierce. The characters jaw animations are just wrong. When they speak, they speak through their teeth at you or their face just wobbles the words out. Utterly unsettling.
- pew pew. Everyone has said it already in their reviews and they said it for a reason. The gunplay is quite bad. There is no aim and you basically have to just wait until they get close enough and pull the trigger. Everyone crumples and falls over with the same animation, there is no indicator for how many bullets you have left, yeah. It’s not good. Solution? Stealth your way through the level instead.
- secondary character voice acting. The minor characters were more miss than hit. Some of them were voiced fine enough but there were a few duds for sure.
- weaksauce puzzles. Some of the puzzles are really just trial and error, the hallmark of a bad puzzle. The rest usually involve you just fetch questing to find an item to give to a person in exchange for the next fetch quest. I admit I did enjoy the bookshop puzzle though because that at least was different and held a challenge.
______________
If you are a CoC fan and don’t like this game roll a hard SAN check. Yes it’s not perfect. It gets a bit clunky at points and some of the dialogue is cheesy sometimes but it is so close to the original RPG style that it is actually on point with that old school writing. I got 13 hours of gameplay out of this and I got it on sale for 12 bucks. Total win. Makes me want to roll up a new character proficient in sawn-off shotguns and really annoy my Keeper.

Byte sized review
Long distance call
Graphics
3/5 - Call of Cthulhu is a mid-tier budget game and the graphics definitely show this. The game can often look good given the probably limited budget the development team had to work with but there are sections throughout the game where it does look budget, very budget and it can be quite jarring almost feeling like two separate teams worked on the title.
Performance / Bug & Issues
3/5 - Call of Cthulhu is not a demanding game, and even the most modest of hardware should be able to run it at "very high" settings. I did have issues with the sound though, where it continuously kept cutting out. I tried updating drivers, followed other people’s responses to fixing the audio issue but nothing worked. I did find this very distracting and it took a bit away from the experience.
Story
9/10 - This is where Call of Cthulhu really shines. The game has one of the best narratives I have had the joy of experiencing in a game. It's full of twists and turns and red herrings with a couple of shock surprises which really had me wanting to push further ahead so I could see how it was going to unfold. I really loved the dark and nasty cosmic horror plot at the heart of this story. While it's initially a slow burn as all the pieces are slowly getting into place, once you crack past the second half a sense of dread settles in that hangs around right until you reach the end. Excellent stuff on this front.
Gameplay
16/20 - This is where the game falls down a bit. There are long stretches where it feels more like a walking sim than anything else and the investigation mechanics baked into the gameplay, which could have been so much more, seem a little half-assed and under-cooked. The game also plays out more like a traditional point and click than and action adventure and I can see this causing a few players to bounce off the game citing boredom. So in other words, Call of Cthulhu is not for everyone but if you are a mystery or point and click adventure game aficionado, this should then be right up your alley.
Sound / Voice / Music
3/5 - I don't recall the music being particularly memorable and some of the voice acting is a bit hit and miss, but once again this can be possibly attributed to the games budget.
Replay value
3/5 - There are 4 endings you can achieve in the game, so there is definitely value in it if you plan on replaying to get them all. The slow and plodding gameplay might hinder you wanting to go a few more rounds though.
Fun Factor
7/10 - Overall I enjoyed Call of Cthulhu. I found the story to be particularly strong, one of the best in fact, but wasn't too impressed with the under-baked gameplay. Kudo's to Cyanide Studios for trying though. Had they had the gameplay immediacy the story was so crying out for they would have had a cracker on their hands. As it stands this a commendable effort to enjoy during this 2020 pandemic if you can forgive the flaws.
Overall score
73%
Rating

Should have been just a walking simulator.
THE GOOD:
+ Good story & lore.
+ Creepy atmosphere & environment keeps one in constant panic especially during stealth sections.
...AND THE BAD:
- One of the worst lip-syncing ever.
- Choices didn't seem to really matter in the end (the game said otherwise :/).
- Bad FPS sections.
- Lazy jump scares.
- Wasted skill tree.
- Detective sections were boring "point and click".
RATING: 7/10

I may be biased because I love anything Cthulhu and anything Lovecraft but this game surprised me. After reading all the mixed and negative reviews, I was hesitant to play this game but I'm extremely glad I did.
The entire atmosphere of this game screams Lovecraft so I enjoyed it 100%.
Audio was very eerie and it just sounds great in general.
Dialogue surprised me with how good it was as well.
Graphics can be great and other times they look a bit strange. This didn't bother me though. I don't mind graphics as much as I do other things like story and gameplay.
I never had any troubles with the game. No crashing. No bugs.
So if you're like me and you love mystery, a vintage setting, Lovecraft, and Cthulhu then definitely buy this game.

I got this game from humble bundle and decided to give it a try and I was not disappointed. It's not really a horror, more like a great story/detective game. Gameplay itself is very casual, puzzles are fairly easy and the game itself is very enjoyable.