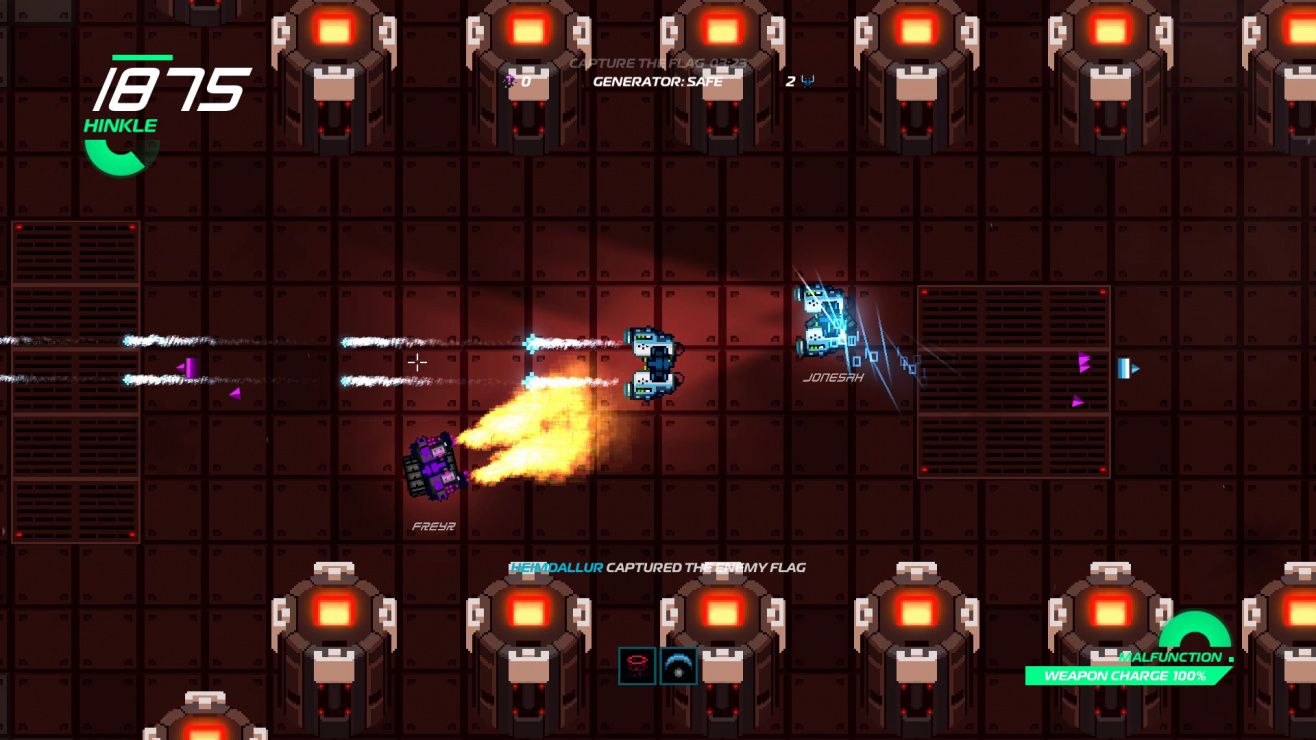 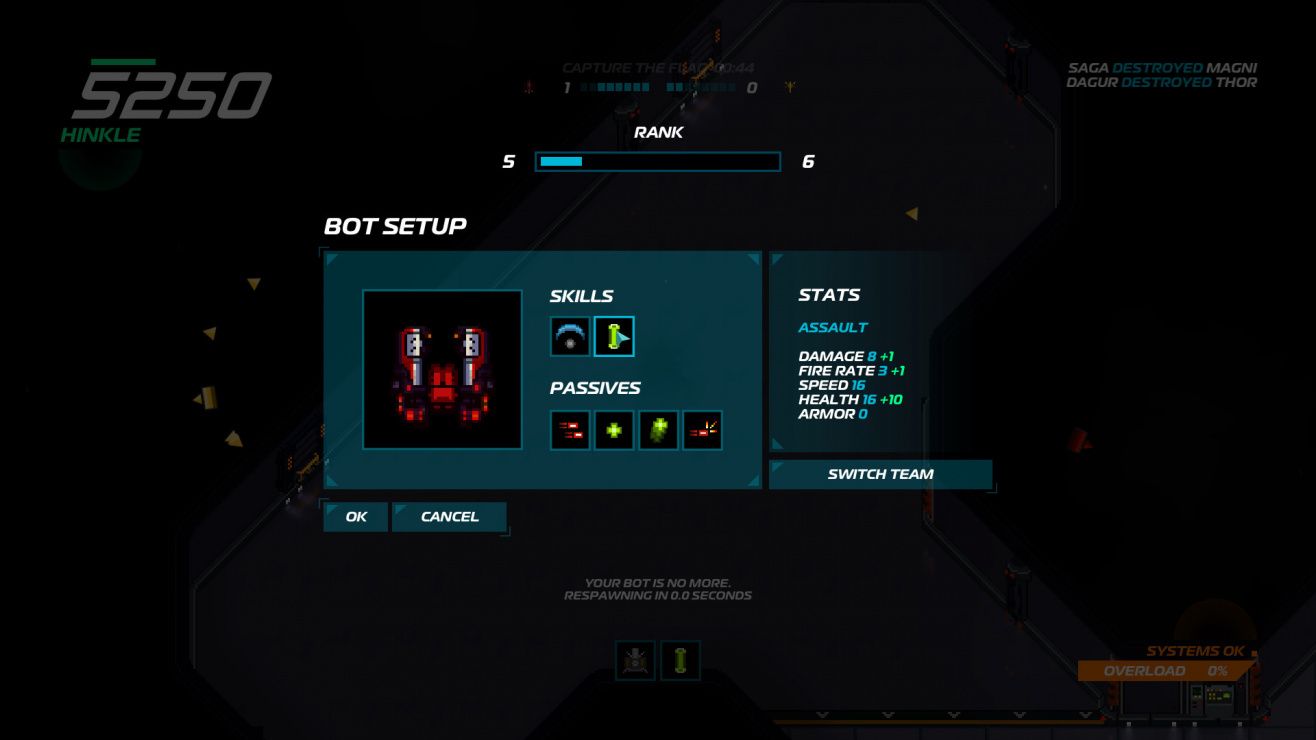 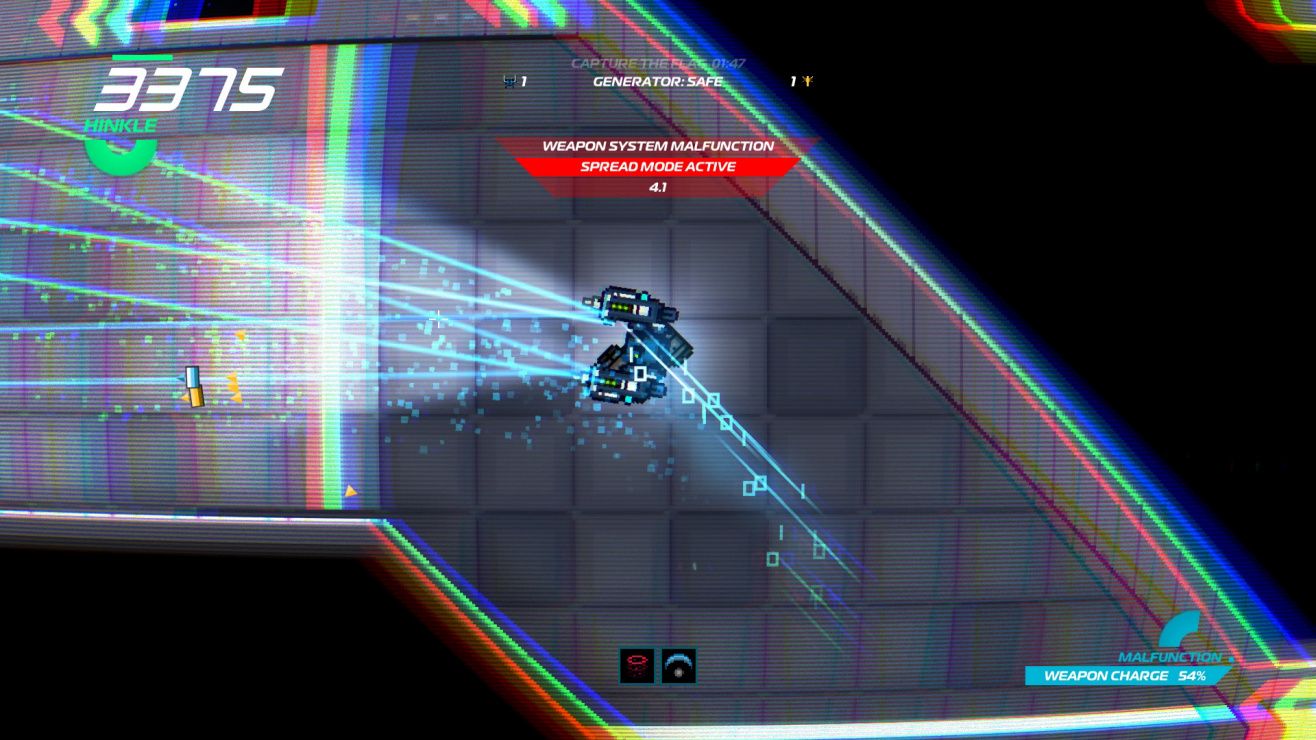 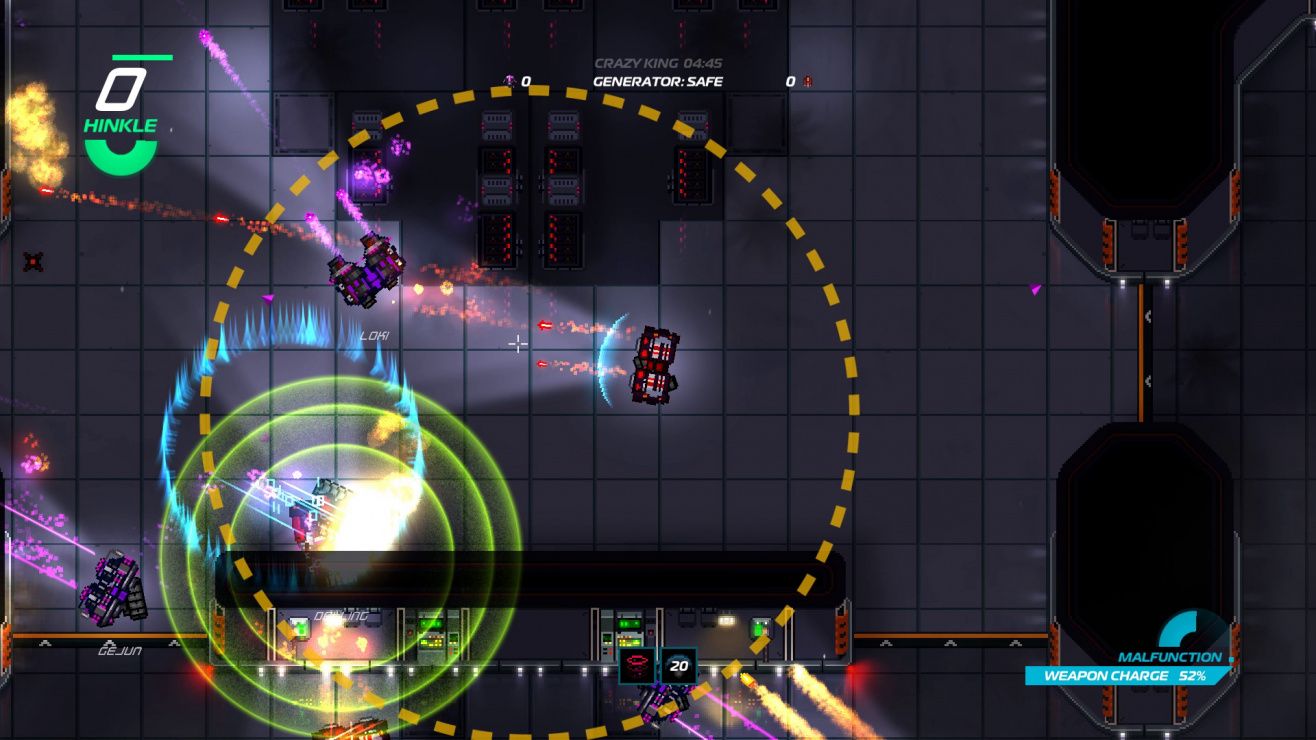 PC Steam Console Playstation action indie multiplayer sci-fi arcade pixel robots battle split screen
Bestow double fire rate to your comrade or bastardize your enemy with reverse controls! Broken Bots is arcade style multiplayer robot warfare where players dish out power-ups to teammates & glitches to foes. Customize weapons, passives, & skills then battle it out in Capture The Flag, Team Deathmatch & King Of The Hill! Malfunctioning Robot Warfare! Shoot your malfunction gun to gift teammates with power-ups like increased speed and bullet spread. Or fire it at your foes to criple their bots with reverse controls, decreased speed, and many more!
Share Share Share
Promote for 50G

What an interesting little game.
It's a Team Online-Multiplayer game with several game modes, all of which are classics. Team Death Match, Capture the Flag, and King of the Hill, with a few variations of these.
Everyone plays a bot, and there are a few to choose from. Each with their own little stats and weapons, although sadly customisation is very very minimal. You can select some active skills ( 2 ), and 4 passives. That's it.
I would have liked if you could actually customise your bot's look and weapons more as it seems rather funky that the smallest one with smallest looking weapons is actually the heaviest with the largest rocket launchers around.
The game is entirely meant to be played online, which could be very very problematic as so few people are online. Then again the game is only Just out, so it might pick up online.
It would have been better if there was even a small little single player campaign, even if only for the tutorial; which at the moment is just text and some animations of bots and a generator.
It's not bad, and it gets the point across but I feel it could do with more there.
In regards to single player, at the moment all it is, is the online matches played against bots. Similar to games of old, if there aren't enough people online the teams get filled with Bots. Their A.I can be lacking at times, and I've seen my team flag runner often getting stuck on another friendly bot.
Gameplay wise it's rather fun, and I do like the music. It's not hard to pick up at all and that's partially due to familiar game modes, controls and limited customisation. You simply quickly select your perks and get in there blasting.
At any time during the match you can simply press T, which brings up the original Bot menu. Here you can select a new bot or change your actives and passives.
That's it really. It's kinda fun, but nothing stellar. Although like most online focused games will be substantially improved when playing with and against friends over Voice Comms.
PC Gameplay

Fast paced intense robot top-down shooter where the gimmik is that the robots like to malfunction. So the fun begins when yur in the middle of a heated battle and your bot malfunctions and reverses your movement controlls, or reverses your aim, and all sorts of other various exciting things to keep combat interesting. you also unlock more parts for your bots to change there stats and make you the best darn robot fighting robot out there :D

A really fun shoot-em up, Best played with friends! Even even accross regions the game was smooth and fun to play, With low latency the game ran perfectly, Lots of weapons and powerups to choose from and good and bad powerups are cool too.

Early Access done right. Already in highly playable state now, with few glitches and grievances, for a reasonable price.
Multiplayer-focused top-down shooter with multiple builds, skills, game modes and tons of chaos. Features both singleplayer and multiplayer, with the addition of filling up empty matches with bots, so you'll never need to fear the community dying. Both keyboard and controller support.

A Multiplayer Twin Stick Arena Shooter
+ The gameplay is pretty fun, you control a robot with a variety of different weapons, and team objective based games which mostly involve fighting and destroying the enemy bots.
+ Constant fast-paced action. The maps are small and you are able to shoot your projectiles at a pretty fast rate. Combine that with 12 players, and you have some pretty epic fights
+ Multiplayer, the servers are great and you never have to wait to join a game as there are AI bots that fill in for players.
+ I found the bots function surprisingly well. You almost can't tell the difference between bots and real players which is amazing. They seem to work together, some may defend while others attack, they go for the objective and take alternate paths. I felt like I'd have just as much fun playing with bots as I would with real players.
+ A nice progression system that rewards players with new abilities, perks, weapons for leveling up which certainly extends the replayability
+ Familiar gametypes, capture the flag, king of the kill, death match, crazy king
+ Good soundtrack
- Not enough maps to play on, I believe there is only a few which get old after a while.

Fun and addictive multiplayer mayhem!
Broken bots has a great variety in multiplayer game modes + a single player campaign. The controls feel great and natural, both on keyboard and gamepad. You can customize your bot to your own playstyle through a surprising amount of powerups, weapons and passives. Add an amazing soundtrack to this volatile mixture and you get a true little gem!
I 100% recommend this game!

I love the idea of a broken bot exposing either positive or negative qualities! The multitude in weapons, armor and looks really adds to the gameplay. I expect this little gem to quickly become a favourite of many.