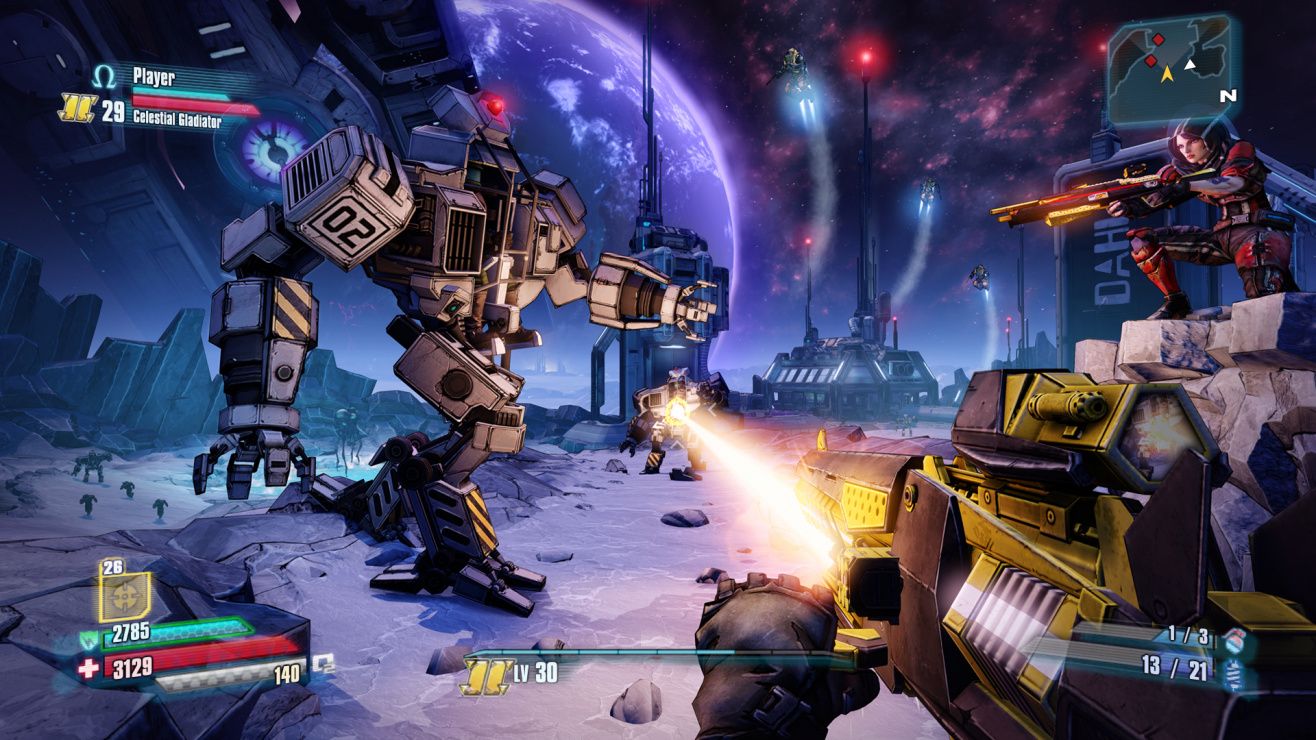 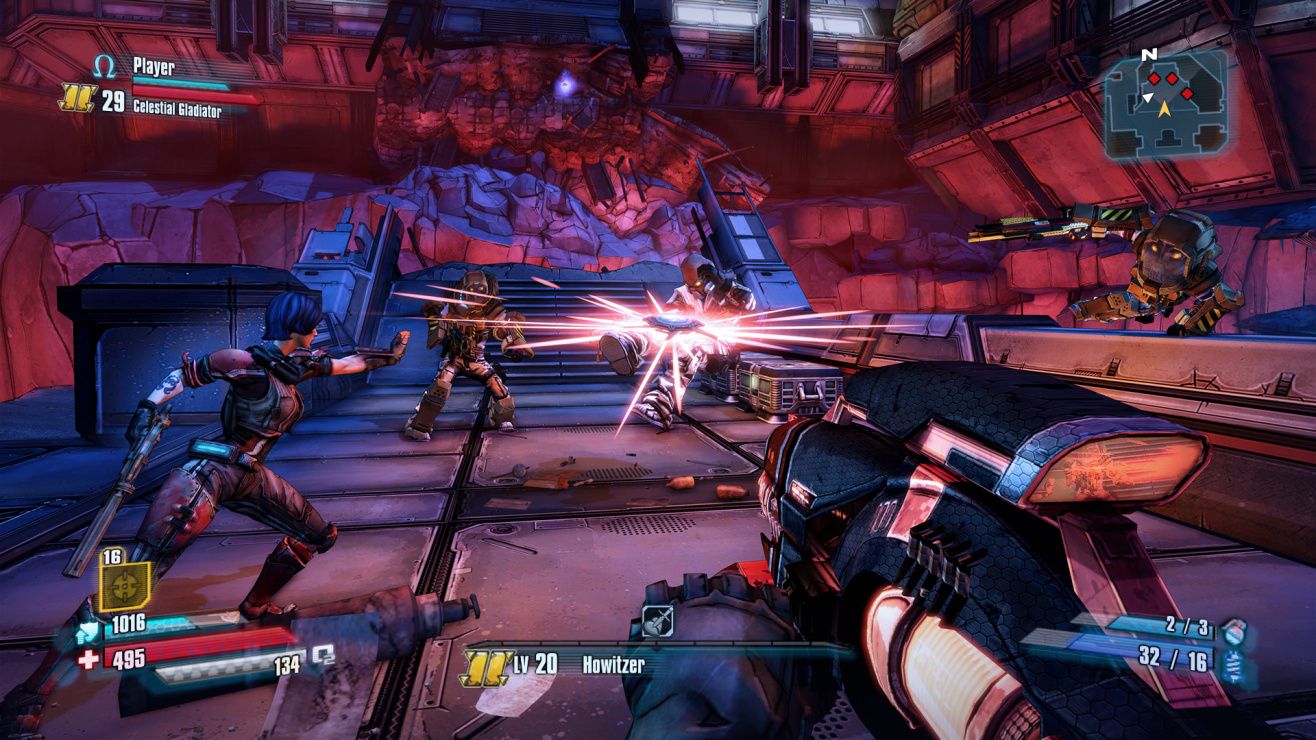 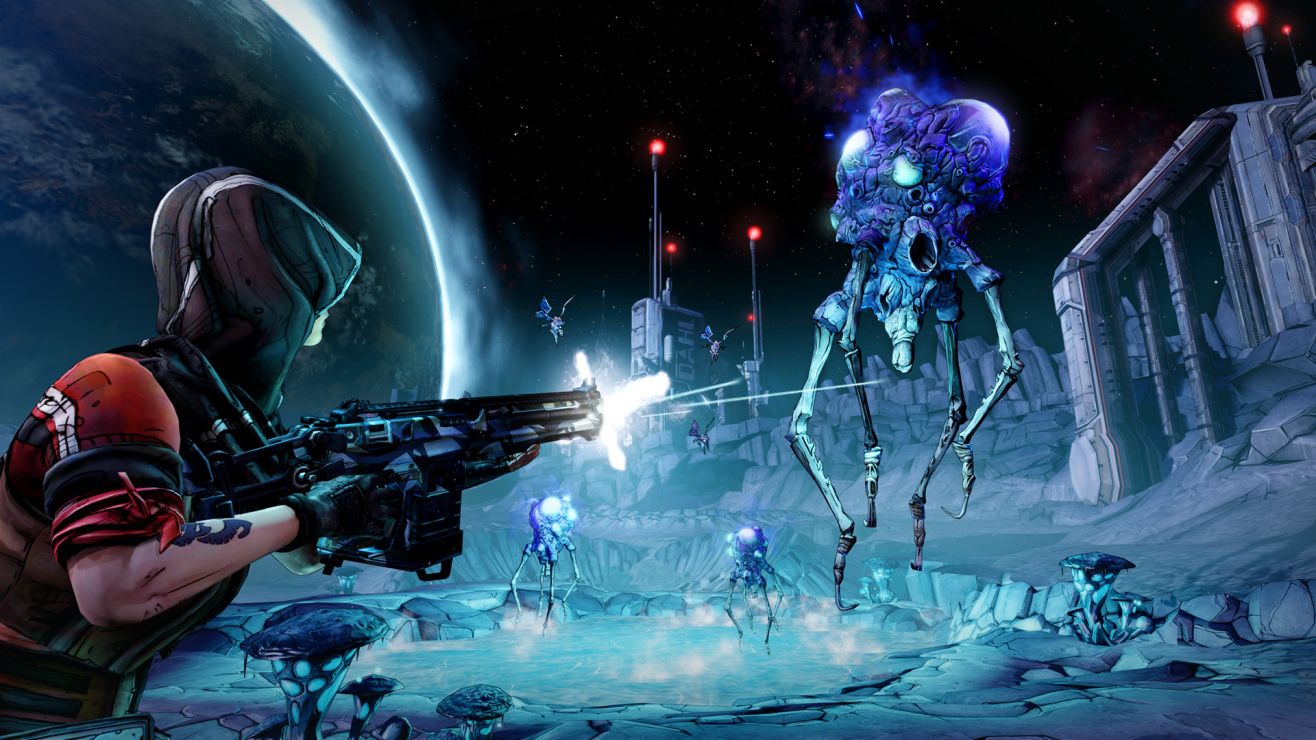 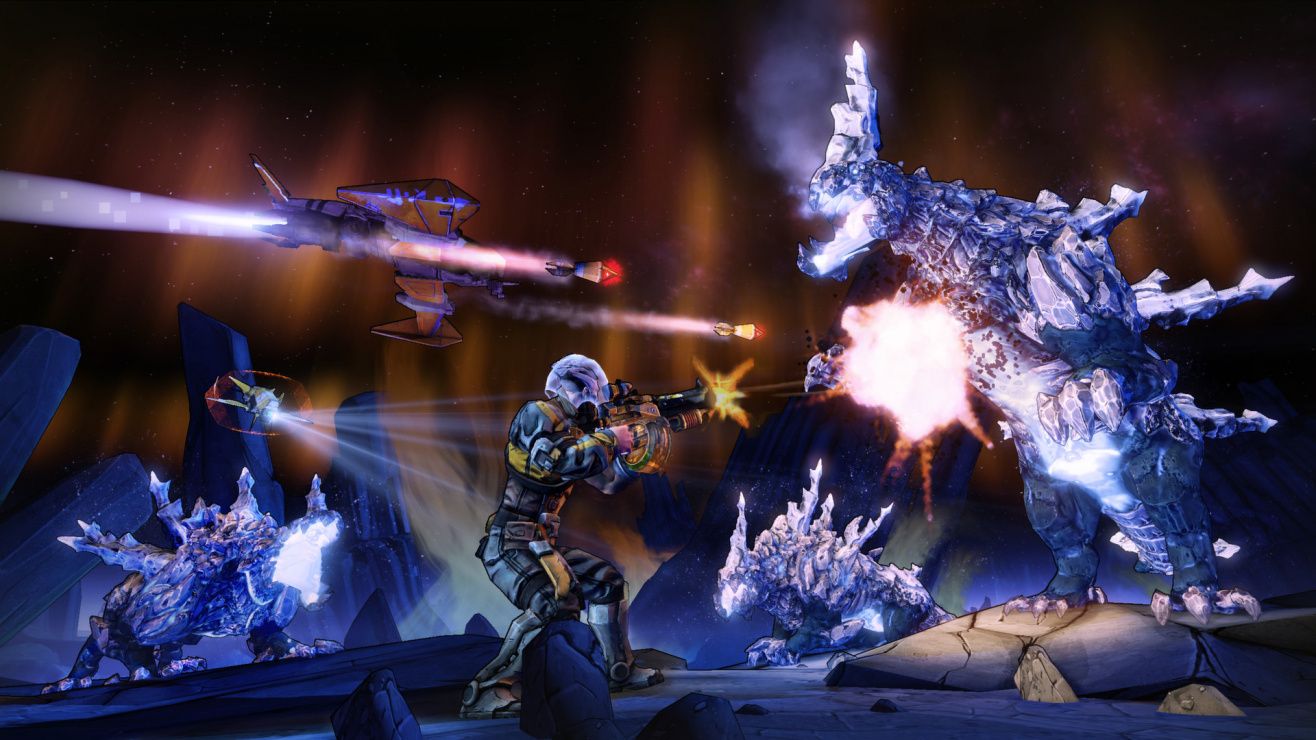 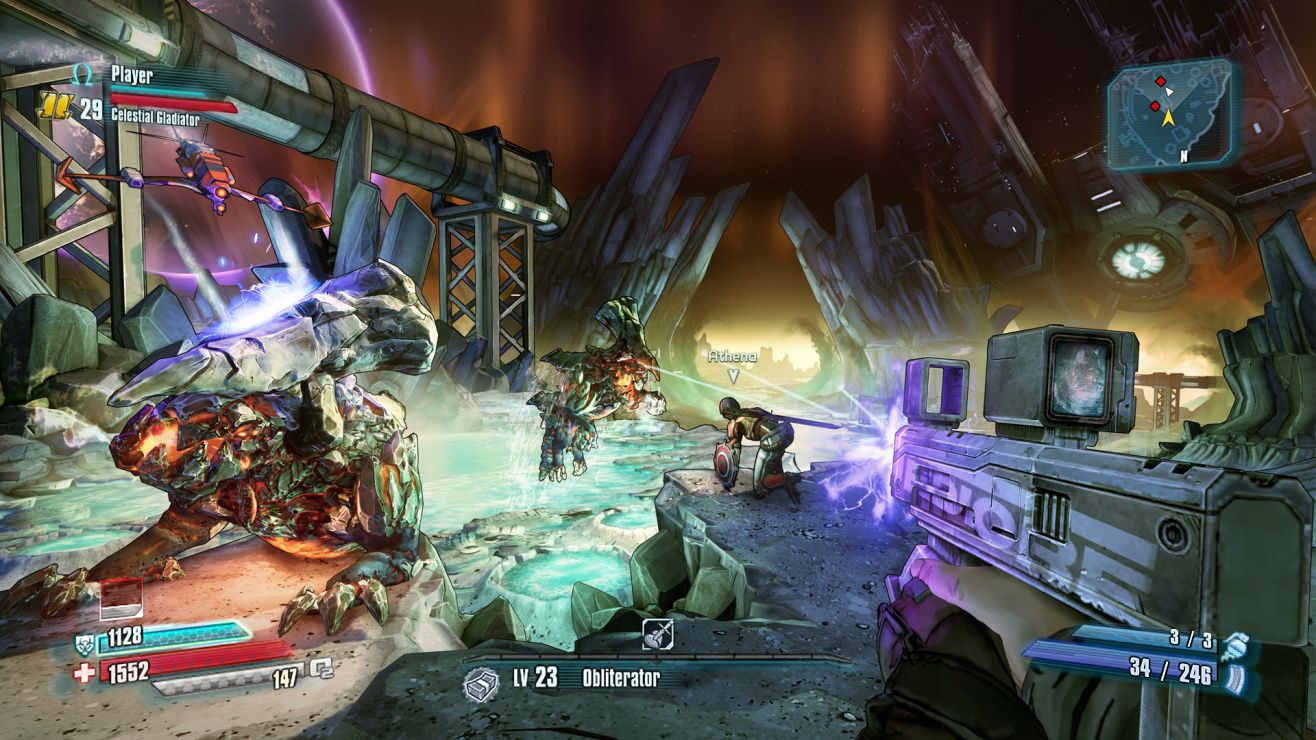 PC Steam Console action Xbox rpg co-op Android Google Play space fps comedy lootfunny
LAUNCH INTO THE BORDERLANDS UNIVERSE AND SHOOT ‘N’ LOOT YOUR WAY THROUGH A BRAND NEW ADVENTURE THAT ROCKETS YOU ONTO PANDORA’S MOON IN BORDERLANDS: THE PRE-SEQUEL! Discover the story behind Borderlands 2 villain, Handsome Jack, and his rise to power. Taking place between the original Borderlands and Borderlands 2, the Pre-Sequel gives you a whole lotta new gameplay featuring the genre blending fusion of shooter and RPG mechanics that players have come to love. Float through the air with each low gravity jump while taking enemies down from above using new ice and laser weapons. Catch-a-ride and explore the lunar landscape with new vehicles allowing for more levels of destructive mayhem.
Share Share Share
Promote for 50G

If you try to play Claptrap it gives you 3 warnings beforehand. 10/10 Warning System

"And Claptrap As a Mistake"
When i played this for the first time with my friends I really wanted to be claptrap just cause I actually like him, and it was funny cuz the game asks you multiple times if I’m sure about that lol and I’m like hells yeah, and sure enough, most powerful character, didn’t need oxygen and my powers were OP.
The Borderlands universe will always remain in my mind as a perfect place.

❝ I never got to play with guns when I was but a lad, but then ol' Jackie came along, and he was awful mad. 'I need a robot!' he declared, 'that can do my mighty deeds'. Then he saw me standing there, and a thought he did conceive. He told a way to make me rad, he gave me slots for guns, then he sent me on my way and wished me 'have some fun!' Now I'm here, a hired hand, amidst such death and chaos. ❝
-Claptrap
💻 Description:
Borderlands: The Pre-Sequel is a very underrated game that unfortunately got the title of the ‘Black Sheep’ in the family. Even though, the concept of space as well as the introduction of new playable characters (including fr**cking Claptrap) was an interesting idea, that alone was not enough to satisfy the needs of the hungry fanbase. According to many the game offers nothing more than the same concept and style of it’s predecessor, making all the hype and wait for nothing. I beg to defer for so many reasons!
📖 Plot:
The plot by far hands down the best that the franchise has ever offered. Not only you get to know the backstory of Handsome Jack, as well as other important characters, but you also explore the moral dilemmas and the reasons that Pandora quote: “Ain’t no place for a hero”. The concept of space is very appealing, there all lots of quests that make you die laughing and genuinely have an amazing time. Loot, guns, more guns, blood and original jokes, all are included and well mixed in the package, as expected from a Borderlands game.
🕹️ Gameplay:
There are some twists here and there that make Borderlands: The Pre-Sequel unique to it’s own way. A good example is the newly added gravity/O2 limitation. Even though, the art style remains the same, the introduction of the grinder, the oz kit as well as a new type of weapon and effect are the main recipes that lead to fun . Like any other Borderlands game it focuses on hard grinding and repetition, so don’t be afraid to grab a friend and start the adventure.
🗃️ Side Notes:
Borderlands the Pre-Sequel had a very bad start in the beginning. Non farmable bosses as well as many bugs made the overhyped fanbase mad, which in the end led to the game’s downfall. It was supposed to be a completely new Borderlands experience, considering the time passed into making it, but unfortunately it could not live up to the expectations.
📋 Verdict:
Overall, I really like The Pre-Sequel, the price may be little spicy, but that's not a problem for our good friend steam here. I highly recommend for players not familiar with the franchise to start with this game, before moving to Borderlands 2, in order to enjoy it's full potential!

As Moxxi would say "You Know what to do Sugar! Buy it!"
This game is not as good as Borderlands 2 but I say better than BL3
Borderlands 2 > Borderlands 1 > Borderlands Pre-sequel > Borderlands 3
The issue with Borderlands 3 is the very bad story. Remember the high school essay that you wrote the last minute pretending that you spent weeks on it? That is the quality of material you find in Borderlands 3.
The positives:
-The double jump because you can go on the moon and do a double jump
-They present a different side of handsome Jack. However, I must say that he is still not a "good guy" he did human experimentations in BL2
-Did I say Chryo and Laser weapons so cool!
-Gear does not become obsolete as quickly.
-I like the characters and it does have a lot of variety! You can play Claptrap, Handsome Jack and Nisha!
-Drop rates feel better than BL2 (that was awful)
Negatives:
-Navigation can be a problem. You think this is the way but no it is the other way
-Sometimes it feels like you are fetching items and the story and game play aspects can make it seem repetitive at times but not always.
-Unbalanced DLC characters
-The devs got a bit lazy some of the bosses look like re-skinned versions of BL2
Overall: 7.5/10 with Borderlands 2 being 9/10 (cause drop rates could be improved by a lot)

This is the real Borderlands 3