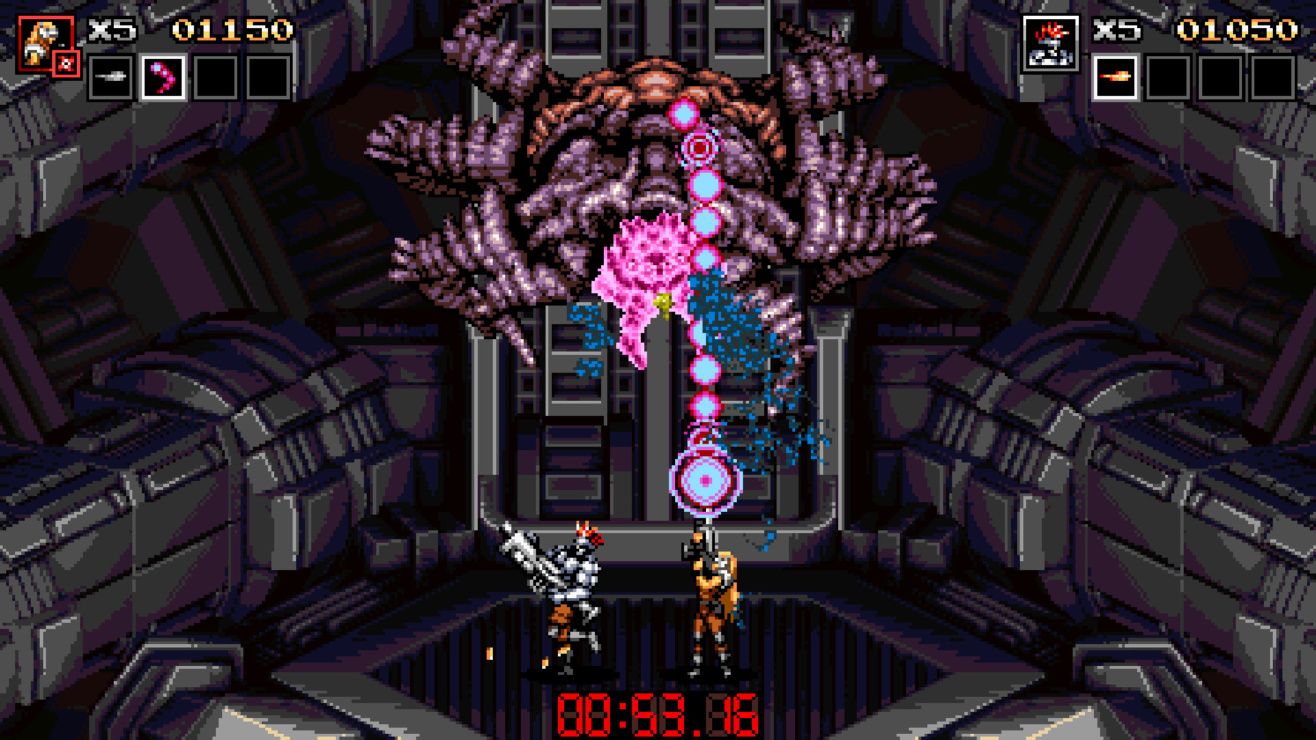 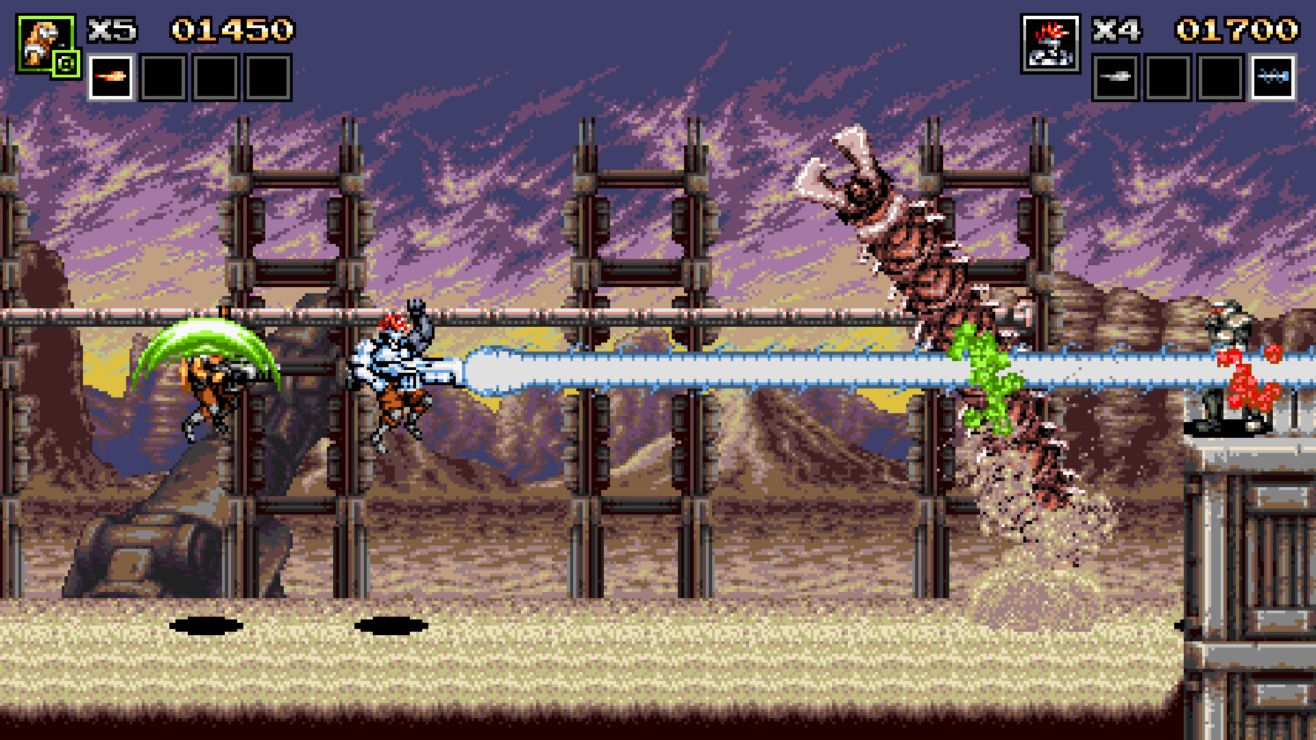 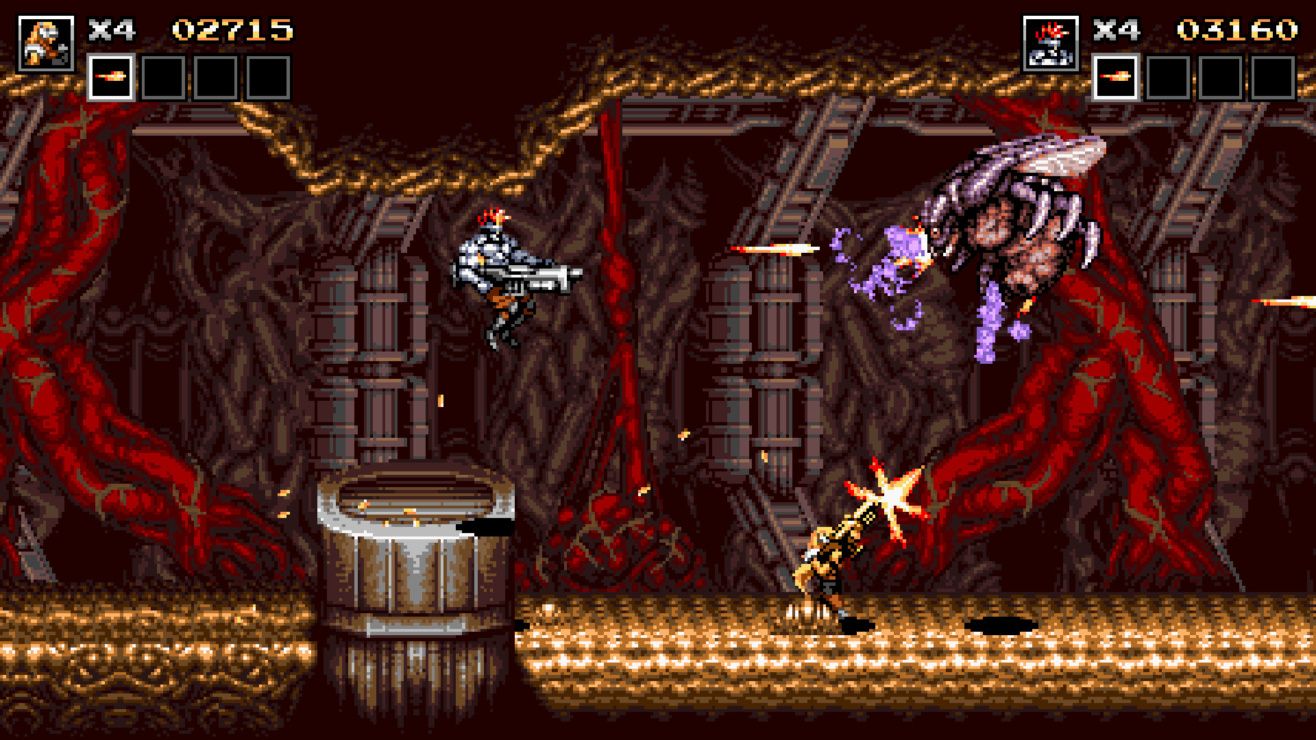 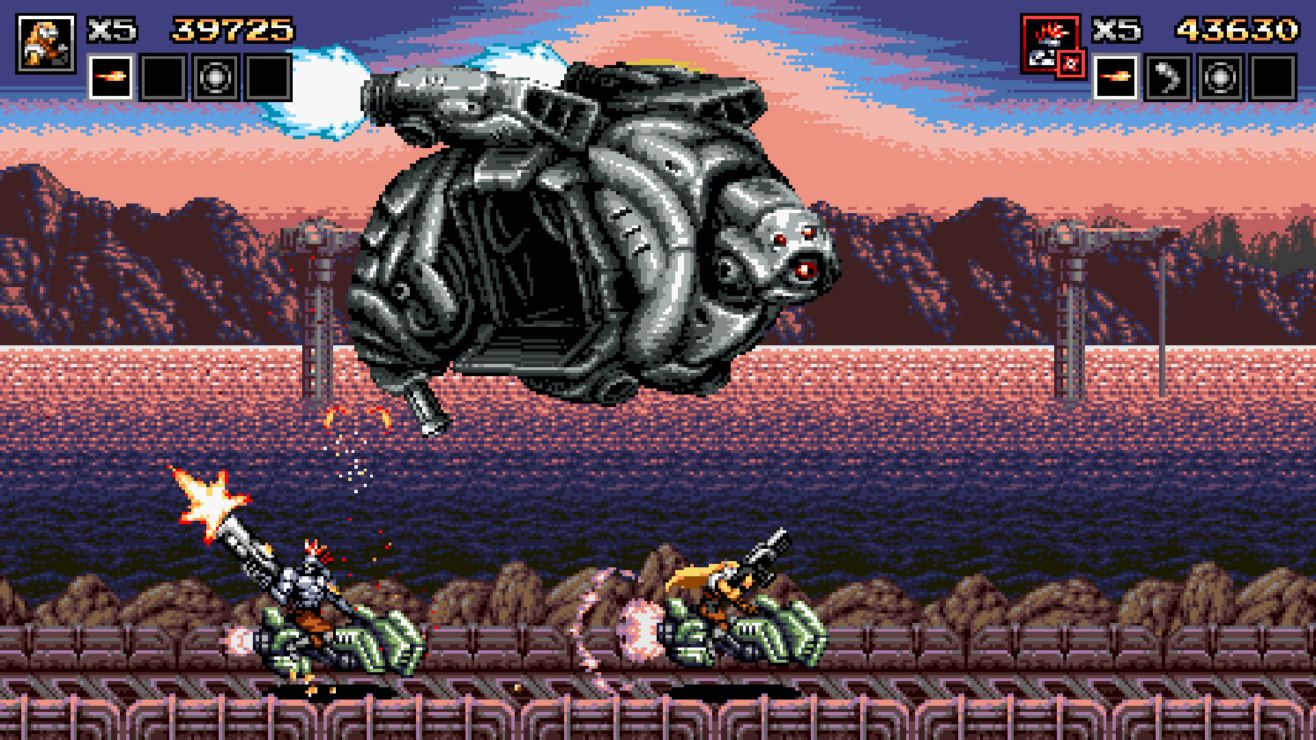 PC Steam Console Playstation action Xbox indie Nintendo singleplayer co-op 2d retro sidescroller
In Blazing Chrome, machines rule the world and the few humans left are on the edge of total extermination, lacking power, prestige or status among their metal and circuits overlords. Bring your best pal and kick some metal butts to free the humankind while enjoying a classic run’n’gun, fully loaded with action and exciting fights! Humans are expendable after an AI controlled robot army take over the world. They survive in hiding while their hunters rule the surface. When a small rebel group gets an intel about a big AI's power plant, the machines strike their camp before they can organize an attack. A small group of rebels escape and go in a suicide mission to destroy this power plant. Choose to play as Mavra, a super badass human resistance soldier, or Doyle, the equally groovy and deadly insurgent robot. This suicide mission will result in heavy casualties and a ton of lock-and-load fast-paced action where scraping robots and blazing chrome with your powerful weapons is the only thing standing between you and your freedom. Dash through 5 apocalyptic environments with hundred of robots-enemies to blow to pieces. Blast your way through the enemy lines and and try to defeat a bunch of mechanical bosses with using hoverbikes, huge armors and a whole arsenal of kick-ass weapons. Blazing Chrome offers a lot of features in the legacy of classic run’n’gun games: ● Local Co-op Gameplay ● 16-bits post-apocalyptic environments
Share Share Share
Promote for 50G

Absolutely freakin awesome.
On the level of quality of Contra 3 and Metal Slug if it was made on the Sega CD. The game play is tight, fair and extremely fun. Definitely pick this up if you're into side scrolling shooters. Play it on easy if it's your first bout and you'll do fine.

I really enjoyed my first playthrough this game! I love Contra and this game has a great understanding of the kinds of spectacle and strong action design that make Contra special, and it has its own unique strong voice on top of that. I can totally see going for that 1 credit clear in the near future.

(Note to the Developers)
80's and 90's blended to a well balance gameplay. Hard and great. Loved of how hard it is but fair. Anyone who has played the SNES will not only get an awesome nostalgia from this game but to a new generation will also love it.
The shooting is great with 4 weapon types and even more to unlock with two other characters when beating the game. You punch and slash enemies that get too close with a very fun beat down. With also some suppot bots that can increase speed, defence, and an attack bot to help fight in battle. It even has Mech suits that help fight in battle like Mega Man X4. Story is simple and easy to understand what you need to get done. Fight and beat the Evil Robots/Alien like beings killing everything that gets in their way and take over world.

If Contra Hard Corps 2 was on the Sega CD this game would be it. Everything from the CD quality soundtrack, sprite scaling, rotation and stretching make it feel like a long lost Sega CD game. Joymasher did an incredible job with not only the cool pixel graphics effects (remember Mode 7 from SNES?), but almost everything from the enemies, levels, and bosses are laid out very well. I always enjoy watching sprite graphics zoom, stretch and do things that I think really show off the engine/hardware, and this game does it very impressive to watch. There's even a cool quasi-3D third person portion too which is impressive. No spoilers here, but the last level had a cool stretching/rotation that blew my mind.
At first, the game felt ridiculously hard. One of my first thoughts about this game was, "This game is pretty tough, there's no way I'll beat Normal mode."
About a day after playing it though, I beat the game on Easy, then on Normal shortly afterward. I did the same thing when i first played Contra and Super C way back when- learned the levels and enemy placement through practice, and they did a fantastic job here as well. Not touching hardcore mode though- 3 lives, no continues, save points or help drones equals a big "hell no" in my book. But when you do beat the game on normal you get unlockable characters and a mirror mode to keep you playing. Very cool!
As I mentioned earlier, Joymasher did almost everything right. But the one thing they got wrong was the weapons. You get a grenade launcher type gun, laser, a weapon that shoots out a solid beam that you can loop around (kind of like the flame gun from Gunstar Heroes), and your standard pea shooter. Problem is, at least for me, I felt like all the weapons kinda suck (except during boss fights) except for your standard pea shooter. The standard gun has autofire, while the others do not. The laser weapon has a charge function in addition to the regular laser, which seems odd with how hectic things can get and how quickly you need those shots on screen. Remember how in Contra the spread gun was THE gun to get? Or even the machine gun? To me, I never really got that feeling in this game and felt most comfortable using the standard gun. Maybe its just me but I feel like they missed the mark here a little.
There's also a roll, which is great to get you out of tight situations (and even has some invincibility frames), but i used it sparingly as its done with down+A, when id much rather have it mapped to a separate button, because to me down+A should be to falling down to the platform below you but instead i would roll and dash to somewhere I didnt want to go and die a lot.
On the flip side, this game has a cool idea of getting support drones which either adds firepower, speed+double jump, or a 2 hit shield. I used the shield the most as its basically two extra lives, but the other drones are cool too and kinda gave me that feeling of its THE powerup youre really looking for in this game as opposed to the other weapons.
Im more of a regular Contra, Super C, Contra III and IV type player as Ive only dabbled a little bit in the Genesis version which this game seems to take its cues from. Having said that, I enjoyed it very much and I think if you enjoyed growing up on these games you'll still feel right at home with this one too. There's also a Contra clone here on Steam called Super Cyborg which is also incredible so check that one out too. Definitely worth a buy!