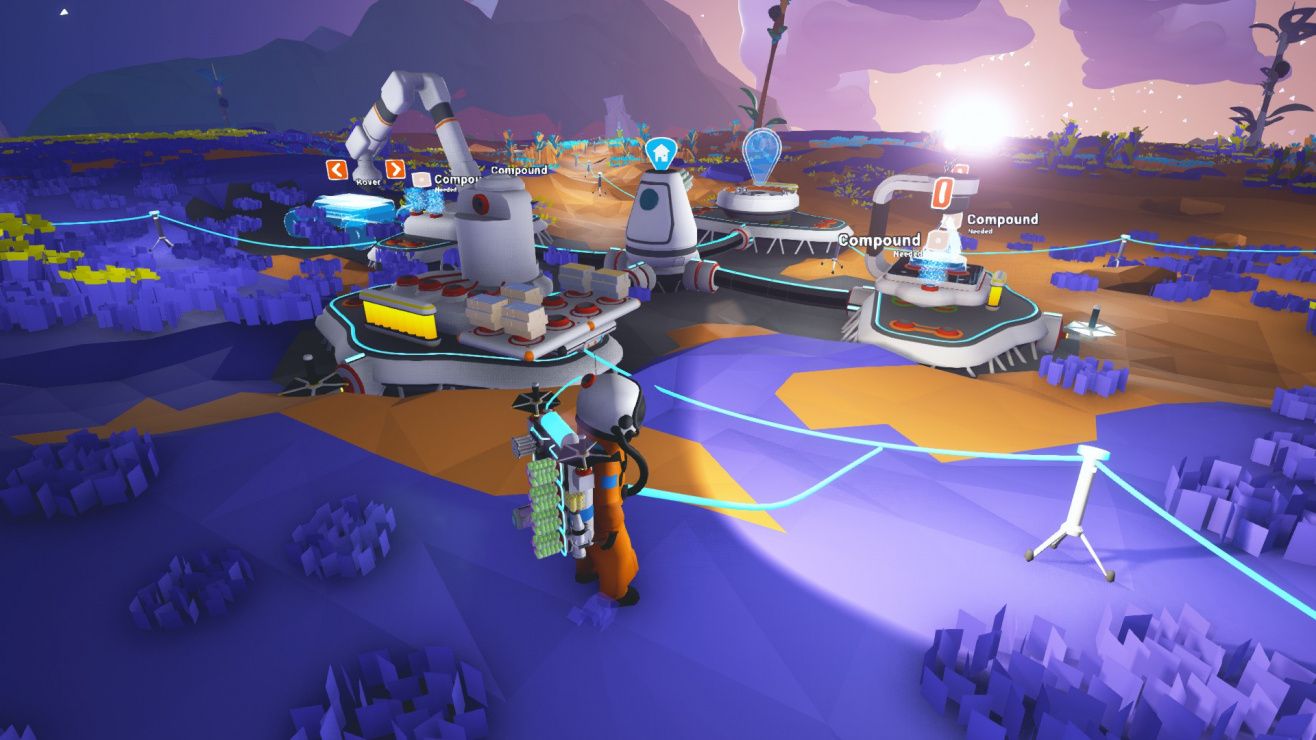 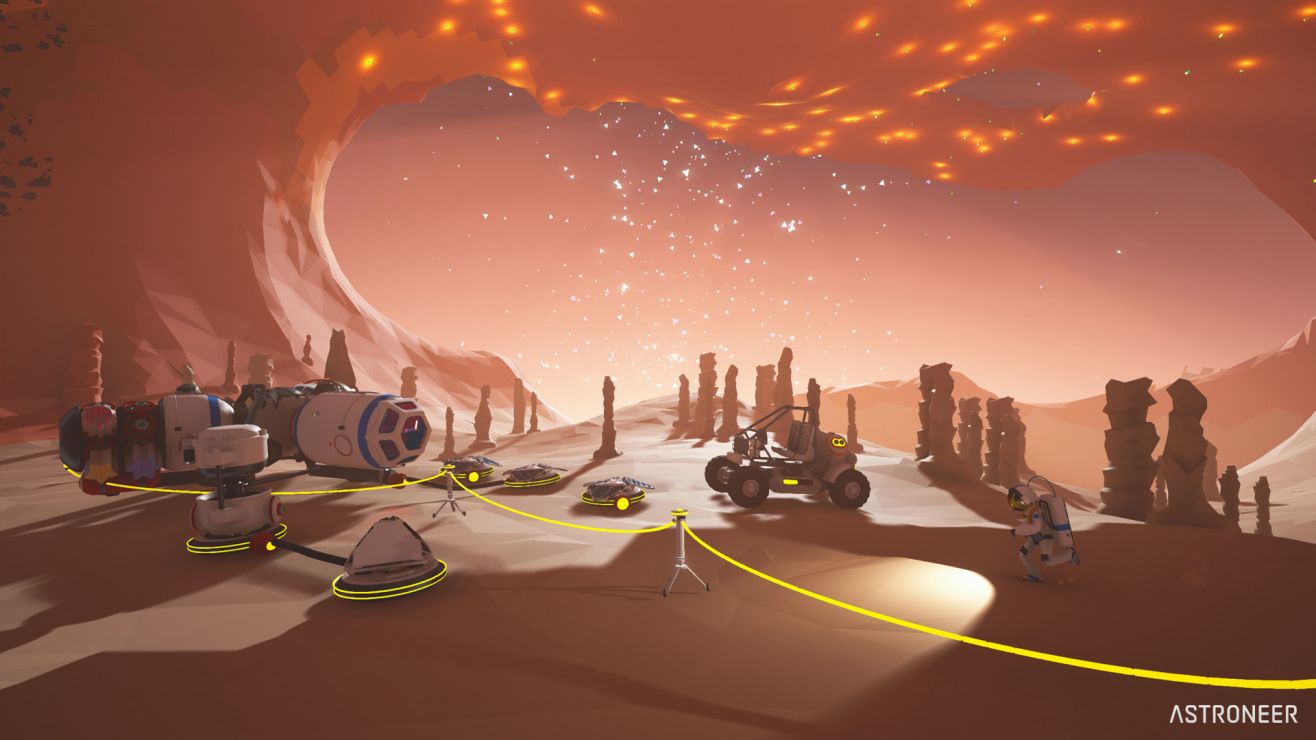 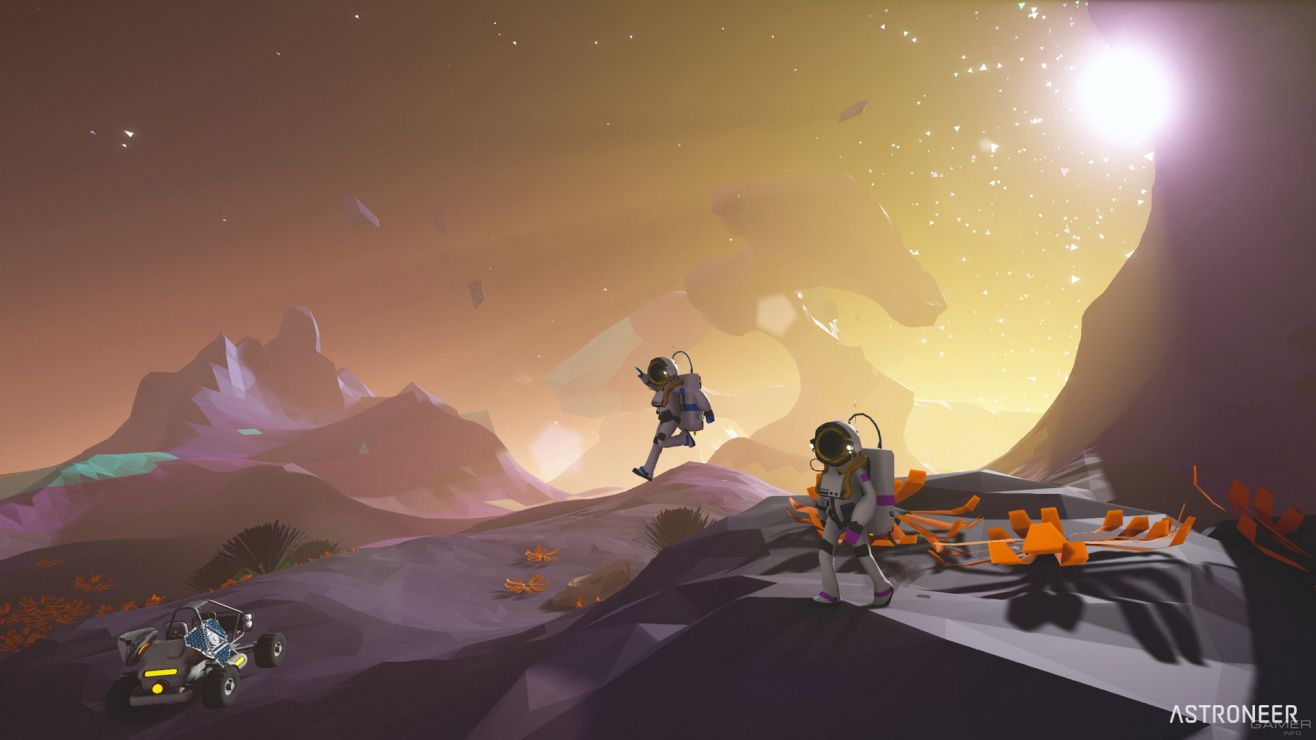 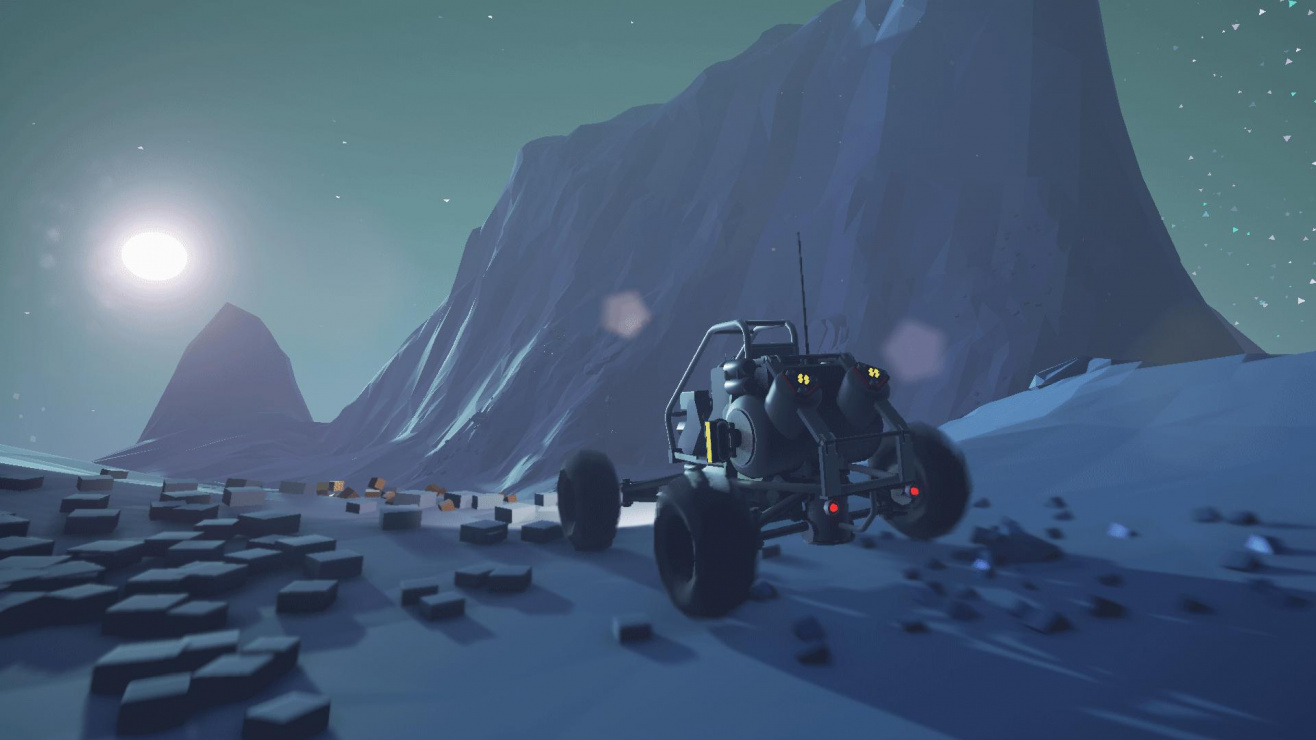 craft exploration multiplayer open world space survival
Explore and reshape distant worlds! Astroneer is set during the 25th century Intergalactic Age of Discovery, where Astroneers explore the frontiers of outer space, risking their lives in harsh environments to unearth rare discoveries and unlock the mysteries of the universe. In this space sandbox adventure, players can work together to build custom bases above or below ground, create vehicles to explore a vast solar system, and use terrain to create anything they can imagine. A player’s creativity and ingenuity are the key to thriving on exciting planetary adventures! In Astroneer you can: Reshape the ground under your feet as though it were made of clay. In Astroneer, players use their deform tool to dig, collect, shape and build anything they wish. Use this ability to dig to the center of the planet, build a ramp into the sky, or make megaliths just by using terrain! Survive on and explore carefully crafted planets that can be entirely deformed and traversed. Our vast solar system includes 7 wondrous planets that players can travel between and explore every inch of, from the entire spherical surface, through treacherous layers of caves, all the way down to mysterious the core. Each of those planets has unique and challenging surface and cave biomes that offer a multitude of challenges for players on their journey. Snap together components and objects to build bases and vehicles.
Share Share Share
Promote for 50G

I like abandoning my friends on deserted planets and watching them build a working civilisation from nothing.

As a gift from my father it was nice to play with him while I could.

my previous iteration of this review was just "haha rover go vroom vroom"... but i have realised that this game is SOOOO much more than just rover going vroom vroom.
Astroneer is not for everyone, i will tell you that right away, i didn't think i would like it at all when i first tried it, but i've come to realise what a beautiful game it is
Let's start with story. In astroneer, you're really just gathering resources to colonize a series of planets and moons (Sylva, Desolo, Vesania, Novus, Calidor, Glacio, and Atrox). large story spoiler ahead you then find that there is something supernatural about these planets, you find the gateways. The gateways, once activated, will teleport you to the center of the planet, where you can activate it. once you activate every planet, and place a "Triptych" in every slot on the cosmic bright node (weird alien satelite above the star) the ending plays out, i will not say what happens
Alright, now gameplay, astroneers transport is mainly based around land vehicles, and/or transport by foot. When on foot, tethers are placed down to give you oxygen to explore out and around the planet. you will go into caves to find resources and dig them with your terrain tool, and using these resources, you can create a base. you also find research items all around the planet, and by researching those in a research chamber, you get bytes to unlock new items to make. the one thing i don't like about the game is that the camera is a little buggy at times, and will stick on your cursor without right-clicking sometimes, but other than that, great gameplay
Overall review (TL;DR): Astroneer is an amazing survival game that's perfect for a good time with friends. 9/10
Thanks for reading!

It's a great game for the family!
I left my wife on a deserted planet, then she left me in a deserted house
10/10 would leave her on Aatrox again!

I got stuck on the moon and had to instruct my two idiot friends on the home planet how to get me back. We all died. 10/10

SUPER LONG REVIEW UPCOMING: Incredible game, my favourite game of all time. Astroneer is a relaxing very grindy base building, survival, resource gathering and exploration game, and a very good one at that. It has a simple and addicting gameplay loop around resource gathering and researching new items, but as expected new resources require going further from base and exploring the planet/planets surface, caves and mountains for these rarer resources. Pretty soon this will mean visiting the 6 planets (technically 2 of them are moons) for new ores and later on, gases. Be warned though, Astroneer is quite grindy so if that's not your thing at all, maybe Astroneer is not the game for you :)
Astroneer has 3 potential causes of death, fall damage and suffocation. Fall damage works exactly like it does in every other game, but oxygen is a lot more interesting. Near the base or a vehicle, the player is given oxygen, and when venturing more than a few metres away, the players oxygen tank will start decreasing, eventually resulting in death. The player can craft tethers to provide a hose of oxygen so that they can explore free of oxygen risks, or they can use air filters to provide a 1 time use boost to their oxygen for a bit. Tethers also provide a useful trail to lead the player back home to base. Later on vehicles can be used to explore completely free of oxygen risks. the third risk is plants that can blow up you or shoot stuff at you or inject poison into you with giant needles. When you die, a grave icon appears above your grave and you can retrieve all your stuff. Astroneer's survival elements are fairly minimal and easy, but this keeps the gameplay relaxing. But don't be fooled, you can run into some tricky survival situations if you're not careful, and if you can't find you grave because it was to far from base or you were deep in a maze-like cave system away from tethers, you may never get your stuff back. All in all, the survival elements of Astroneer add some great depth and enjoyment in gameplay, while not feeling to difficult or frustrating in order to keep the relaxing experience of Astroneer.
Navigation is another key part of Astroneer. The player is given a compass (hover over your character to see the compass), tethers, beacons and the stars to navigate around the planet. Smart players can avoid getting lost even when leaving their tethers by setting up beacons to follow back home or by using the compass well, but even so every player gets lost sometimes. Finding out how to use the stars for navigation (which I won't reveal here) is a very satisfying and useful way for navigation, but you could even go so far as to get a friend to guide you back home from a space shuttle orbiting the planet!
Which brings us to the next topic, multiplayer. Astroneer has 4 player co op (soon to be 8 players in a few months with the introduction of dedicated servers) that simply works with one player hosting a game and the other players joining. It's simple and works really well. Multiplayer greatly increases the fun in Astroneer, speeds up progression and just makes the game better. Astroneer is best with friends, simple as that.
Vehicles are another key part of Astroneer, providing oxygen, faster exploration, storage and increased mining potential. The vehicles range from small exploration buggy's, to massive rovers that could even be changed together to form mobile bases. Vehicles greatly increase the fun of the game, exploration potential, and mobile bases are EPIC.
Base building is really satisfying. You can enhance your base with terrain creations, but it is not required. The power system in bases is also handled really well. Not a whole lot to say here, but base building is really good!
Astroneer also features a toggleable creative mode. You can activate and turn on creative mode in existing survial saves, but this will not allow you to get achievments in that save. Creative mode is fabulous for customising your experience, going crazy with base building and creating epic structures from terrain, or just mucking about and attempting to blow a planet up with dynamtite (it has been done before ;). Personnally I don't use creative mode heaps, although its great for setting up survival challenges, but I have seen some players do some absolutely crazy things with creative mode and built some insane creations.
Theres also a mysterious story if thats your thing btw. The ending is pretty epic ;)
To summarise, Astroneer is superbly designed game that's really relaxing, addictive, and can be a blast to play with or without friends. Survival elements are fairly easy but fit the games atmosphere and style really well, getting a perfect balance between difficulty and relaxing gameplay. The mystery story is also pretty cool. Be warned though the game is quite grindy, so if you really hate mining, it may not be the game for you.
Pow

This is the most relaxing game I've ever played, and it's the ultimate work-from-home side project. There's no rush to do anything and you can stop playing at a second's notice. The whole vibe is very chill.
The game is well-made. There is a perfect balance between exploration and crafting. The music and atmosphere are impeccable works of art. The sound effects and animations are also superb. All-together the product leads to a very satisfying game experience.
Here are a few things I thoroughly enjoyed doing.
- Terraforming a racetrack into a planet and gliding along it in my buggy.
- Busting through moon rock in my large rover like Sam Bell.
- Discovering an oxygenated pre-built platform and making a cool base out of it.
- Stumbling upon a rich deposit of rare minerals.
- Using the chemistry lab for that satisfying *ding*
Here are a few things that literally gave me chills.
- Launching myself in a space shuttle off the newbie planet for the first time to I-had-no-idea-where.
- Delving deep underground and discovering the secret at the core of the planet.
I'm nearing end-game content as I write this and I still think there's much more to do and discover. I'm happy to recommend this game. It's been a true joy to play.