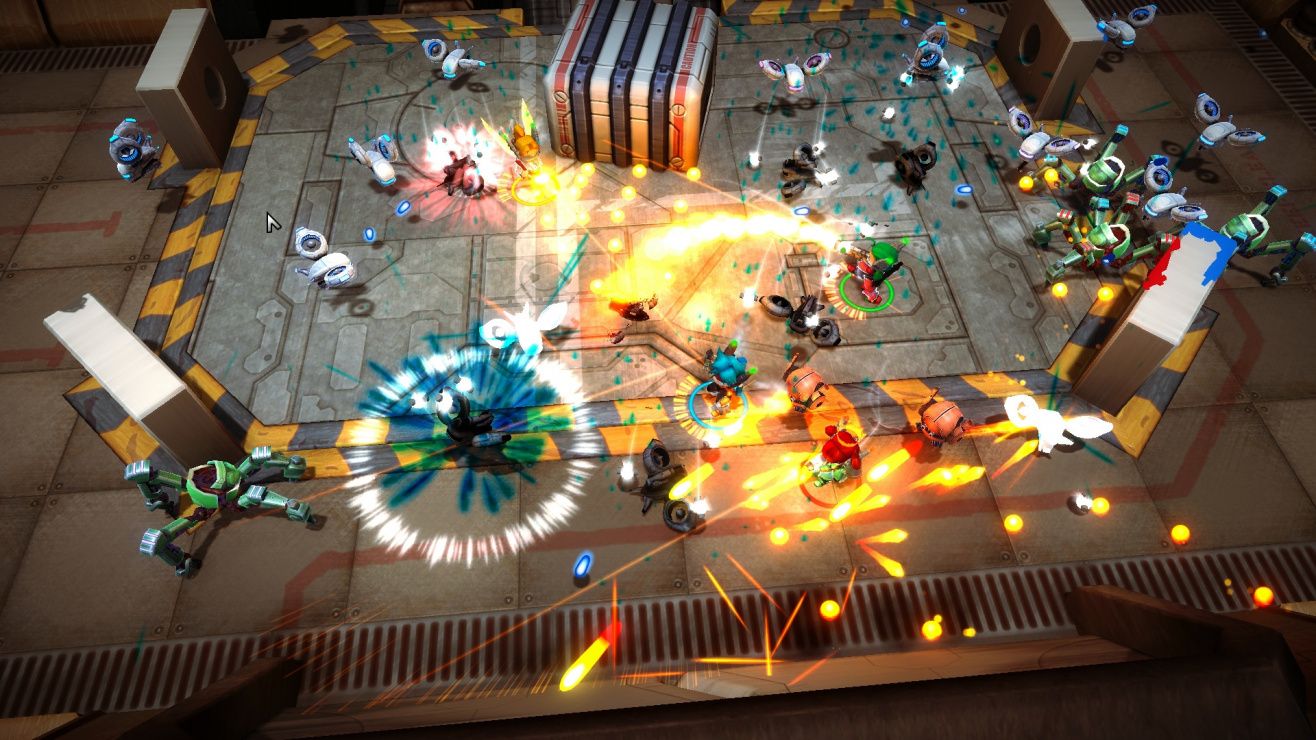 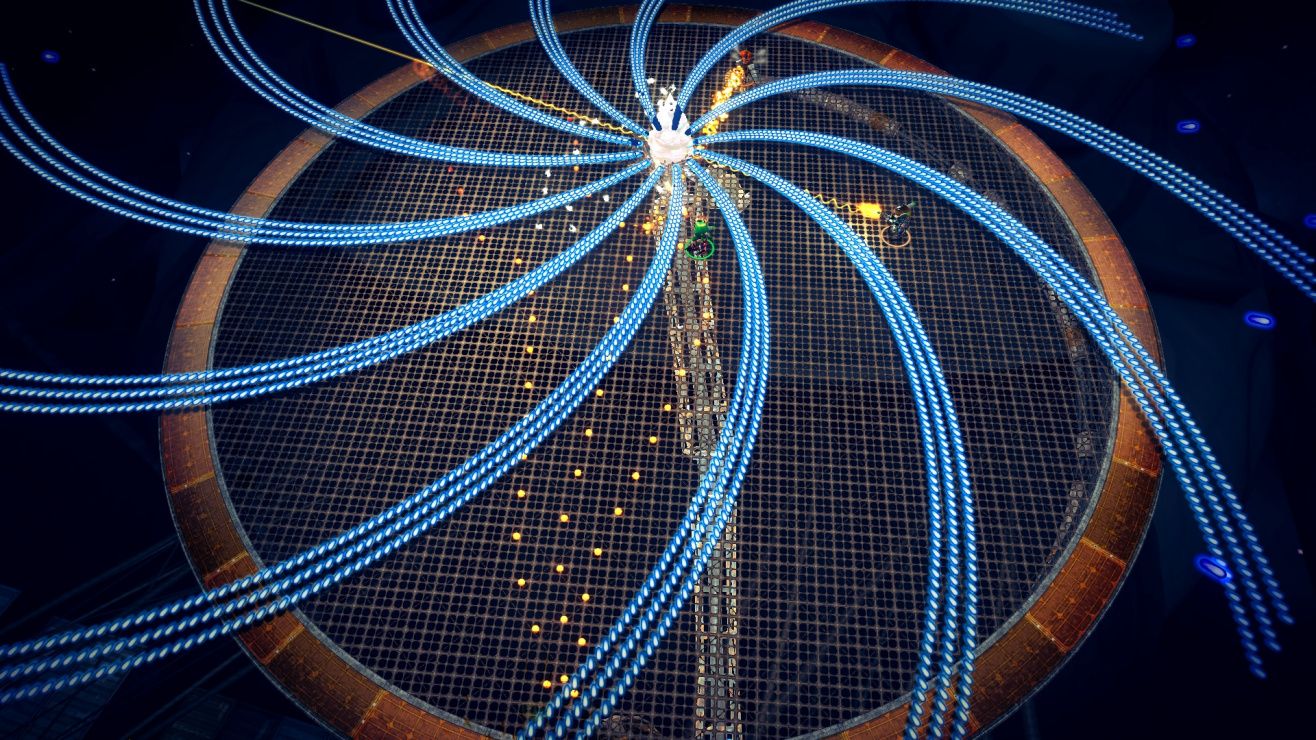 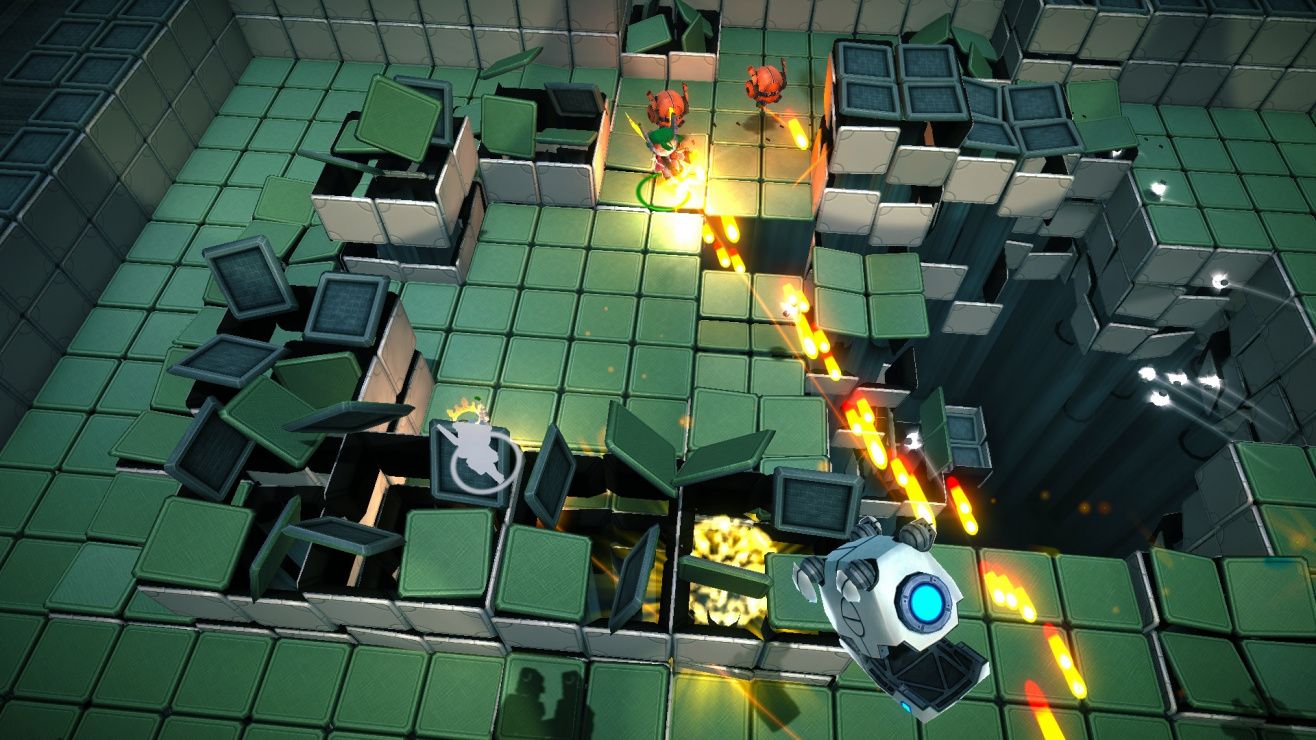 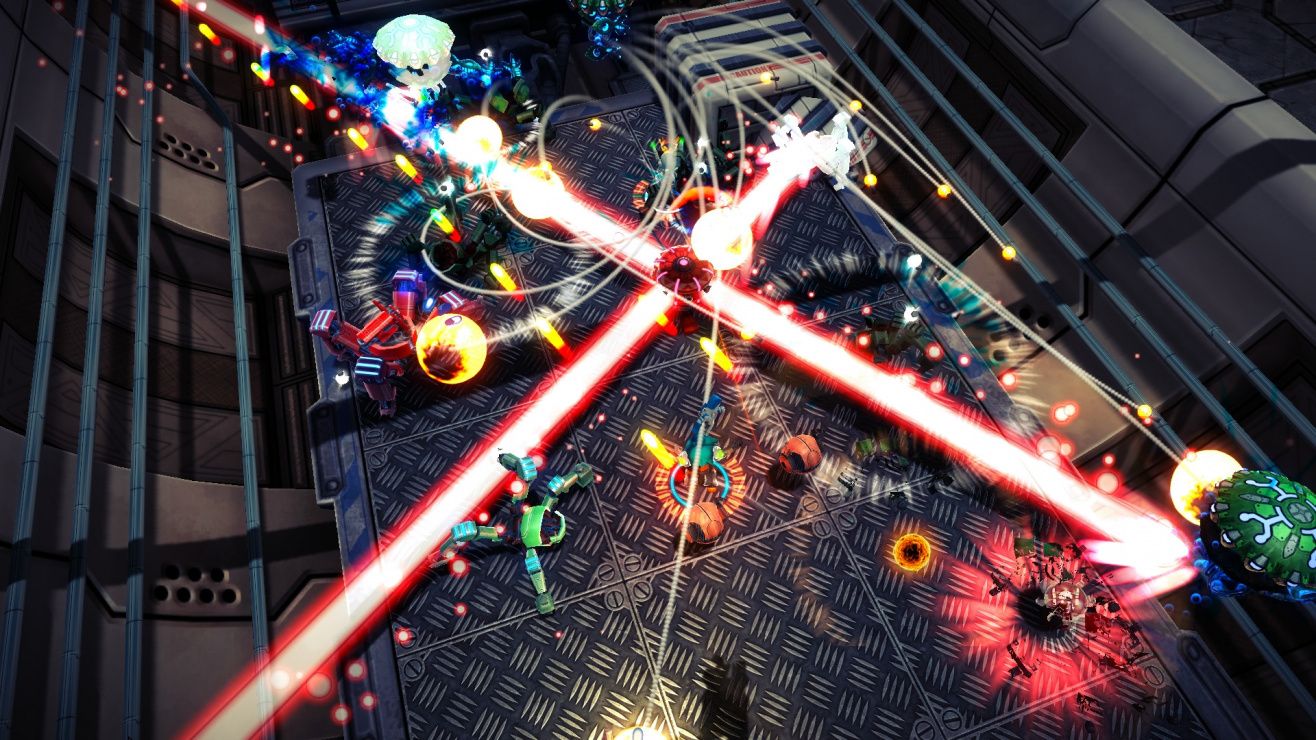 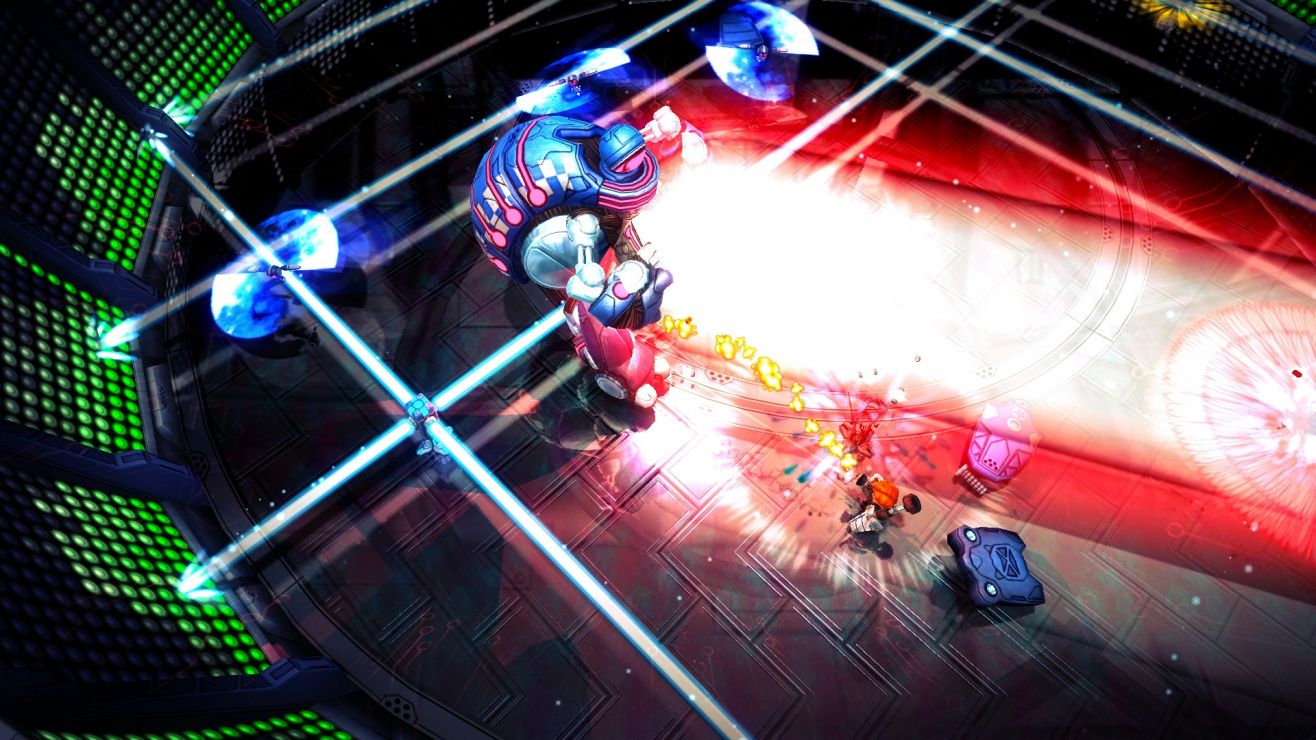 PC Steam Console Playstation action Xbox indie Nintendo singleplayer co-op split screen bullet hell
When you're running on battery, make every second count! Assault Android Cactus+ is an arcade style twin stick shooter set in a vivid sci fi universe. Junior Constable Cactus is outside her pay grade when she responds to a distress call and ends up stranded on a crippled space freighter under attack by its own robot workers. Utilising a draining battery mechanic in place of lives, Assault Android Cactus challenges you to think fast and keep the bullets flying, blending the gameplay of western styled arena shooters with aspects of Japanese style bullet hell as you charge head first through transforming stages, massive boss battles and an eclectic cast of characters on the way to saving the day. 9 playable androids, each with a distinct play style and personality 25 stage campaign spread across five areas of the ship, face down giant bosses, earn characters and uncover the story of the Genki Star
Share Share Share
Promote for 50G

Nearly five years later and still one of the best twin-stick shooters on PC. Like a long-lost Dreamcast game, remastered and polished up to mirror shine, and now with a very beefy campaign thanks to the upgrades from the Switch re-release.

This game oozes with goodness. A great 3-D twinstick shooter. I was recommended it by a steam-friend (rick) and took a long time to warm up to it. Now I am really enjoying every part of this program. Refined gameplay. The soundtrack is excellent, and I listen to it offline. Works great on ubuntu linux with gamepad controllers.

I have never played a game like Assault Android Cactus before. Twin stick shooters from bullet hell have long seemed too frenetic to me. However after a chance meeting with one of the developers on a bus led to scoring a free copy of the game, I felt obliged to give it a try. Turns out it's a great game!
There's been a robot uprising on a spaceship and Cactus, the assault android of the title shows up to blast everything to bits. There are 3 other androids available to play from the start, with more unlocked as the game progresses. There's a lot of variety between characters, with each having a unique primary and secondary weapon, resulting in a lot of different ways to play. Whichever character is chosen, thousands of robots will be in pieces by the game's end, including some hulking and challenging bosses with some hectic projectile patterns.
The story moves through several different areas of the ship, with each world throwing up new environments, hazards, enemies and rocking dynamic music. The amount of variety is impressive, especially considering how well designed and cohesive the game is as a whole. The first world is the storage hold and the opening level begins on a freight elevator plummeting down a shaft before crashing into a lower deck. A later world takes place on the outside superstructure and the ship itself is visible in the background. Even little details have been considered. All the androids have plant themed names, including one called Starch, whose raw appearance courtesy of having no outer shell casing matches being named after a food molecule rather than a complete edible plant like Lemon or Aubergine. The characters are quite humourous, with simple but fun personalities expressed in a couple of cutscenes but mainly through their in-game voice snippets and text dialogue with bosses.
I can't compare to other twin stick shooters, but the controls felt fluid and responsive with a gamepad. Mouse and keyboard control is supported as well, but I preferred using dual sticks to whiz around spinning every which way to stay out of trouble. The main annoyances were courtesy of the amount of chaos on screen. Some enemies launch missiles which fall vertically, their point of impact marked by a target on the ground which is easy to miss when there are enemies swarming over that ground. Sometimes mines drop from the sky as well and they can knock an android flat with little warning. With so much going on, technical hitches could potentially be very disruptive, but the game ran smooth as the best peanut butter on my modest system and no crashes in close to 50 hours of play.
There's a lot tucked away in this game. Running through the campaign will be relatively short, but there's plenty more to take a shot at. For bragging rights every level can be completed with an S+ ranking, which requires every enemy to be destroyed in a single chain. This turns the levels into puzzles and really brings out the differences in character playstyle. There's also boss rush mode, a daily challenge and an infinite mode. Such is the polish and enjoyment of the game, this twin stick newbie was also sucked into checking out all these alternative ways to play. Credits earned through play can unlock extra goodies such as visual filters, a first android viewpoint, increased enemy numbers and more. The + version additions brought on board in 2019 are a harder campaign plus mode with it's own leaderboards, new costumes, a bunch of fixes and small touch-ups and more play options focused around accessibility. It's a very full experience.
Like the assault androids in the game, don't underestimate Assault Android Cactus. It brings plenty of firepower in a small package.

Manic action with impossible numbers of baddies coming at you from all angles. Buy this NOW if you like Robotron 2099 or its spiritual follow up SmashTV

I don't think I can overstate what simply satisfying fun this game is. In the finest pick-up-and-play tradition of top-down shooters of old, it's your robots against waves and waves of other robots as you collect the barest-essential powerups to keep yourself going. Besides the edge-of-your-seat action and an almost perfect difficulty curve, AAC keeps from getting stale thanks to the variety in its design. Stages that reform around you, act like a giant centrifuge, or light you up like so many motion-sensing Bunsen burners; bosses that attack from above, below, and all angles in between; player characters with different styles to fend off an impossible number and equal variety of enemies: this is what a classic genre should look like in modern gaming times.

I'm not great a bullet hell games, but I had fun playing this one. It was really challenging. I played most of it co-op, and we'd hit a boss that we couldn't beat and just stop playing for a few months, but we always came back.
The music is good, the characters are interestingly designed and the game (for the most part) feels fair.
It's good enough that I hope there's a sequel some day.