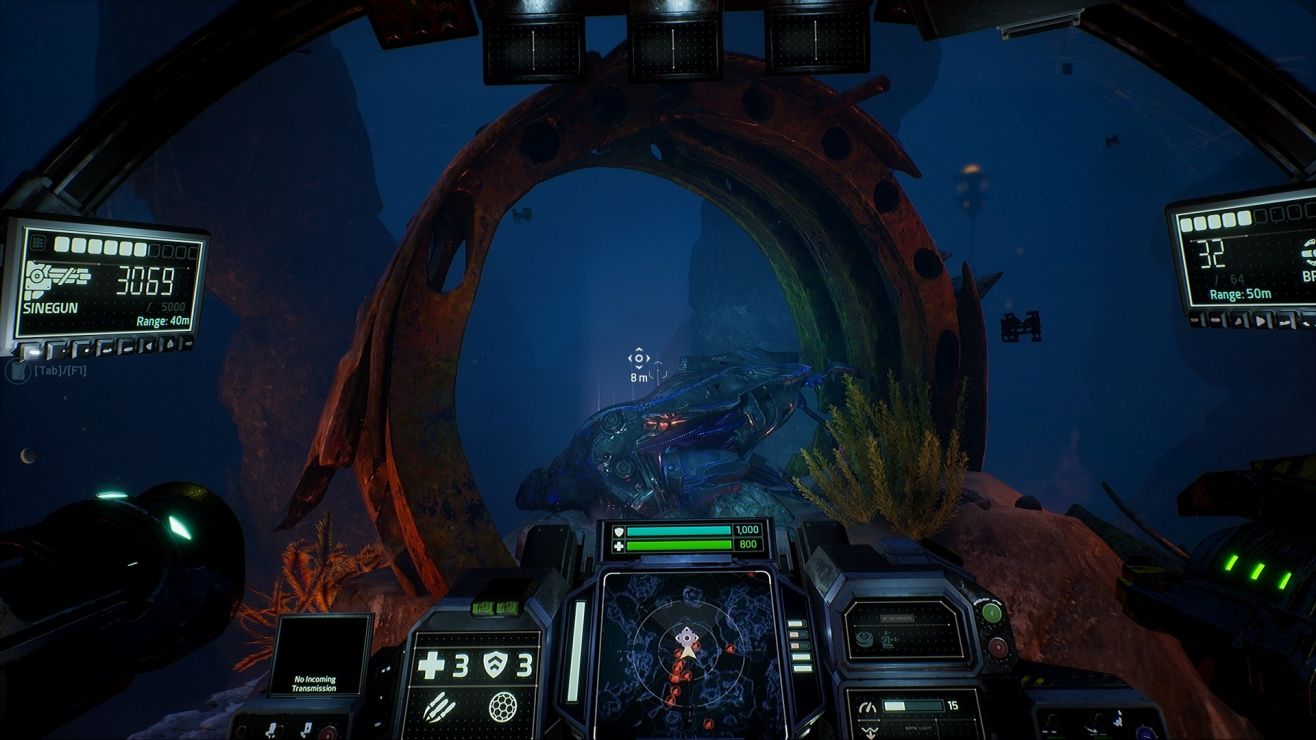 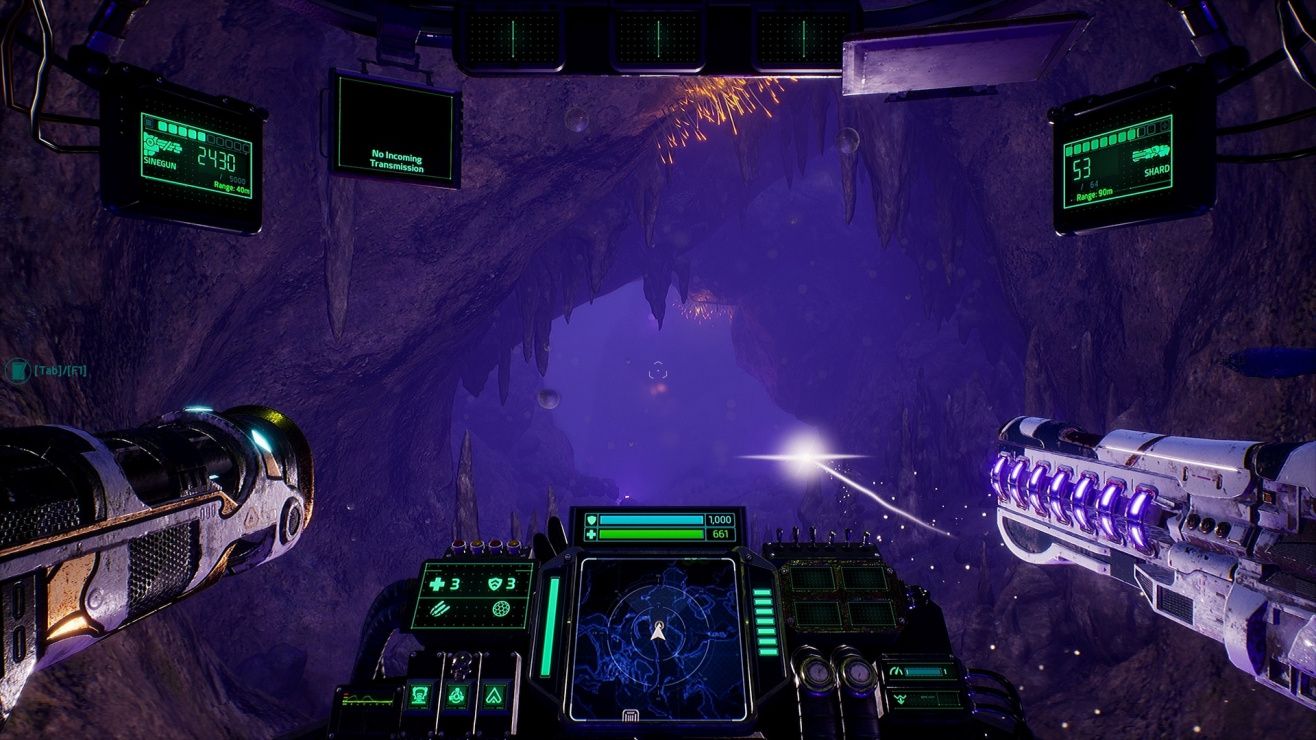 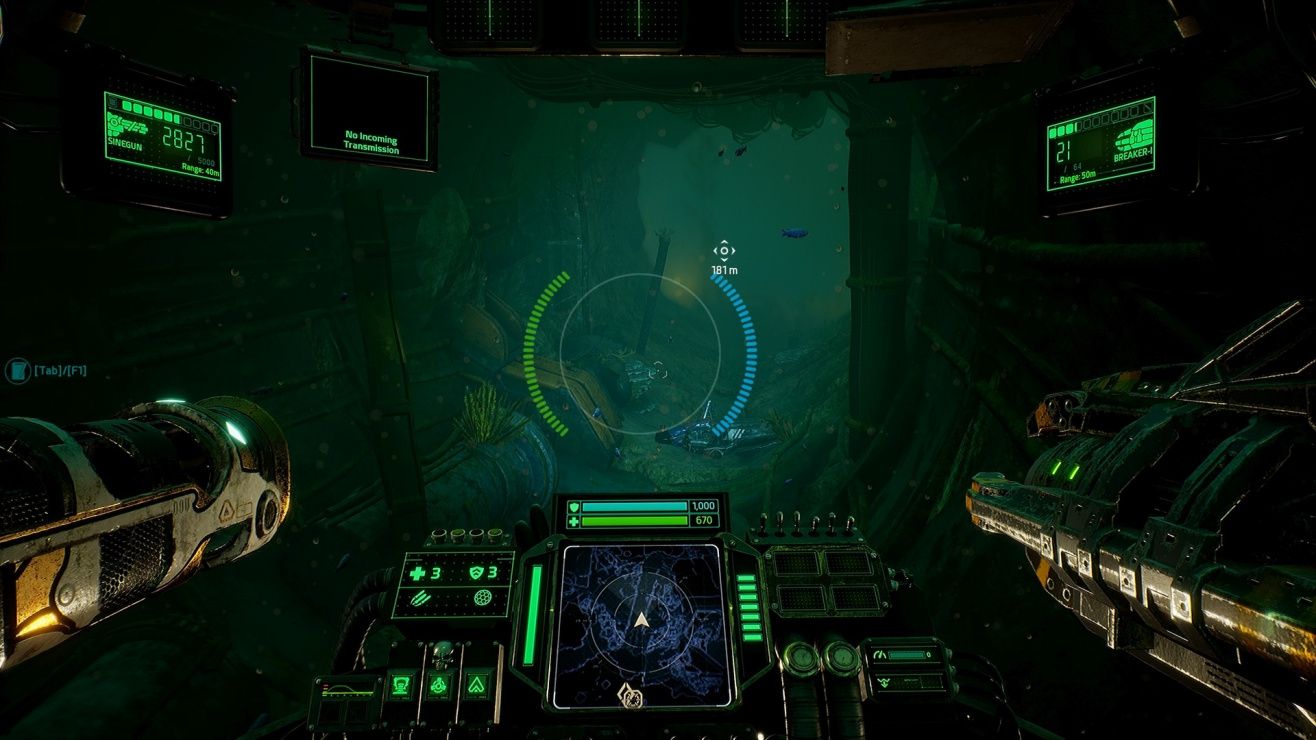 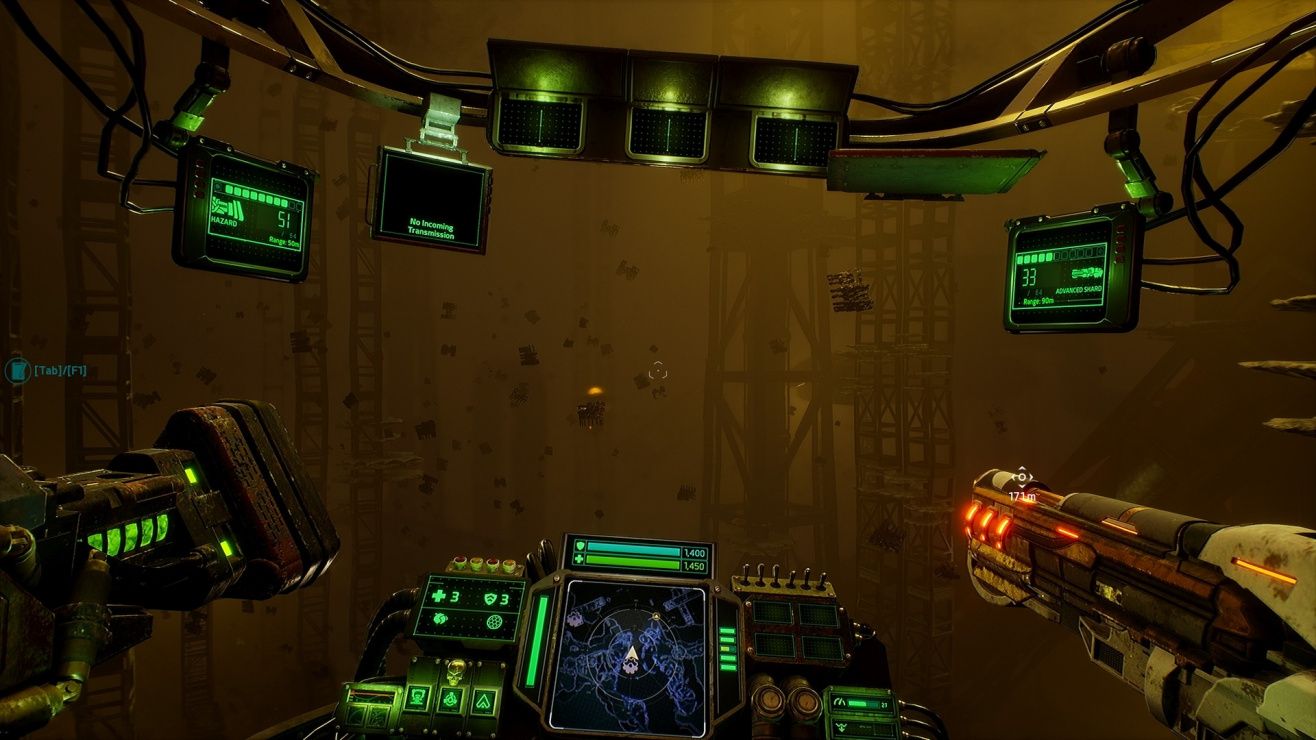 PC Steam action adventure singleplayer shooter fps combat exploration flight vehicular
Aquanox Deep Descent is a first person underwater vehicle shooter, in which players control a variety of customizable ships to engage in fierce battles in the dystopian deep sea world of Aqua. In the near future the Earth's surface has become uninhabitable. What remains of humankind lives in former mining and research stations, deep below the surface of the sea. Born and raised in the only world we know, the loose network of underwater settlements, torn by the war for resources and dominance between various factions. Take control of a team of highly trained fighter pilots and experience an epic story in the dark world of Aquanox. Send your enemies down to Davy Jones' Locker with well-aimed torpedoes, shrapnel blasts, mines and more in a journey that takes you across the world's oceans and into the deepest trenches of our Earth.
Share Share Share
Promote for 50G

I'll get this out of the way since some have the wrong idea about this game...this is an arcade shooter so don't go expecting some kind of underwater submarine simulator with realistic physics.
If you played the previous Aquanox games or Archimedian Dynasty, then you will also like this.
It recreates the great atmosphere of the previous games and adding it's own flavour to it, but still trying to keep things old-school.
To some it might seems too old school and not exciting enough since it lacks the open world aspect. The gameplay consists mostly of getting missions from someone on a station and then doing those missions in a linearish fashion and on the way you are free to explore the current area you are in and collect crafting materials or shoot thugs and the likes.
With the mentioned crafting materials you can either craft yourself ammo and submarine parts or trade them at various stations you come across your travels.
Combat is pretty straightforward shooting with your typical assault weapons, shotguns, snipers and rocket launchers and other tools at your disposal. The enemy AI is not particularly smart as it is aggressive and enemies tend to gang up on you so you got to keep moving constantly to avoid fire which makes the combat hectic at times.
Story tells the tale of 4 individuals who have been awakened from cryosleep, have lost their memories and need to find out what is going on. If you play a solo game, you only control one of them even though the other 3 are with you in dialogue but are of no help in combat. If you on the other hand play with your friends via co-op then they will take the other 3 individuals spot and can help you with your endeavours.
Have not finished the game yet, but after about 17 hours in the BETA and about 10 hours on the final version, I'd recommend this.
Yes people have different opinions and some can see straight away it's not for them, but I would suggest playing this for a few hours at least and see what it has to offer....you might be surprised.

TLDR 6/10, adequate 6 DoF combat game, some flawed mechanics and absurd story, but looks half decent and some what enjoyable.
Longer thoughts.
With fond memories of the originals and Archamedian Dynasty, I backed this on Kickstarter.
The end product...is a bit of a let down.
But, ignore the outright stupid things people have said about this game.
(I've given this a positive review to counter balance them a little and because Steam doesn't have a "Meh" rating yet)
"It should be a mobile game" - Sure, try controlling it on a fricking Samsung/Iphone!
"It's too murky, where are the sun rays" - It's the bottom of the ocean, what did you expect?
"The AI is rubbish" - To an extent yes, but never game breakingly so.
The graphics and atmosphere are pretty good, with some nice touches like water seeping through damage cracks in your canopy.
Every ship and every cockpit upgrade looks pleasingly different and can be enjoyed, with a pointless free look mode.
Sound and music are also decent, lots of good muted thumps and clangs of things hitting the hull.
Game play is okay, very much built around a console controller so keep your flight sticks away and don't expect any exciting dogfighting.
Be ready for lots of 6DoF strafing around foes, chucking fire at each other, spamming special abilities and using repair power ups.
There are some immersion breaking things (hah, water pun!), like the narrative is that you are a squadron.
You aren't, it's only ever one of you.
And instant spawning hostiles, right in front of you, inside a sealed facility, with no in setting mechanic for it, is just crappy.
There is a rudimentary salvage and credits based economy, which to be honest feels a bit bolted on.
Sure, you can scour wrecks and on occasion will find special weapons, but they are barely worth the effort.
The range of ships if reasonable, but the fact you get them at set points, along with unlocking their upgrades, further highlights how pointless the economy system is.
And there is one big flaw with the weapons setup.
You can switch any weapon out on the fly, in case you run out of ammo and don't have time to craft more (you being able to craft ammo inside your fighter, is kinda stupid).
But, because you can't scrap or sell any weapons you don't like or are just plain redundant, you will end up cycling through junk to get what you actually want to use.
How your fighter is carrying 12 different guns at once, on switchable mounts, is beyond me.
Better option would be to ditch all of the resource and economy and just restrict you to carrying either a pair of weapons (with cool down or reload delay) or 4 different weapons and that's it.
The only really bad part of the game, is the plot.
Not just because it's fairly predictable sci fi bilge, but it's also badly told.
Factions pop up with little explanation or back story, same with science and setting stuff.
Your characters possess knowledge they could not possibly have and NPC's know things about you for no apparent reason.
There are a handful of fairly dull side missions and totally pointless dialogue choices, which have no effect on game play, ending or even mission order.
And to cap if all off, your best of the best type main characters, are just really, really dumb and unlikeable.
The finale will leave you pretty cold, as there is no real resolution and you will have developed no emotional attachment to the characters or story.
Maybe get it when heavily discounted, play it through once, then forget about it.

As an backer of the huge Limited Edition of the Kickstarter Campaign i say: Thank You!
I have played Schleichfahrt/Archymedian Dynasty, Aquanox 1 and Aquanox 2.
= The game is more arcade than simulation and mainly linear.
= More action than deep gameplay.
= Do I recommend this game? I have enough playtime to say: Yes
= On easy i needed ~14-15h to play the story.
+ No crashes so far. (Ryzen 7 4700U Notebook)
+ Quiete good atmosphere, the soundtrack reminds me of the sounds from Aquanox 2.
+ It's nice to play with mouse/keyboard and Controller.
+ Different weapon systems. Mountable automatic turrets and useable drones.
+ Story: In my opinion the (German) voice actors where a good choice.
+ I think the ~first half of the story was ok but the ~second half was good.
+ You can save nearly whenever you want.
+ Ingame Aquapedia with information about Aqua.
- Story: AI is sometimes spawning just a few meters next to you out of nowhere.
- The nanofauna is annoying, they make much damage and AI often don't fight them.
- You can not sell old weapons, in combat you have to switch through all of them...
- After a while the same comments of enemy pilots gets annoying.
- Multiplayer: No textchat. :/
0 General: The 3D radar of the other Aquanox games was better.
0 A colorblind mode would be nice.
0 Story: Due to the linear story discovering the maps on your own is not very rewarding.
0 The levels where good but not very remarkable, only Brandenburg was very cool!
0 Multiplayer: Maybe more modes(2) and maps(4) for multiplayer? (It's funny anyway!)
0 There are so much things that Archymedian Dynasty, AN1, and AN2 makes better. :(
Anyway, i think Helmut Halfmann, Emerald Flint and William Drake will drink an TsunamiBooster™ to this game. Cheers!
Thank you Aquanox Team, the backers and all other people that made this game possible. :)
With new patches the review will be updated!

It's not exactly groundbreaking, and a bunch of the features they made up during early development never made it into the game. But. It's the best underwater shooter currently on the market. The setting is pretty interesting. The story is there and has basic competence, I guess.
It feels a lot like a 90s shooter, which is... not for everyone, but I'm having a blast with it.

Waited 5 years for this game to release.
It got a good story, great lore, good graphics. Gameplay itself is OK, not great, but still fun.
If you play a little longer (~6-7h) you'll get really great ships that are WAY more fun due to better agility and speed, weapons with more bang and the story gets a boost and the graphics and missions are tuned up.
It's not an AAA game but fun for a mission based shooter :)
- The game is not as good as Schleichfahrt was, but an OK succecssor to Aquanox 1 & 2.
- The voice actors are good, even in German.
- Graphics miss one or two things like global illumination and lighting effects on the surroundings. The water effects and deep-sea-feeling is well done.
- Level design is good in terms of visuals, but a bit repetitive from time to time. Later on in the game the levels look vastly better and immersion is nice.
- Enemy AI is nearly nonexistent. There are no dogfights as in the previous games. I hope this will be sorted out in an update, but my hopes are not high with THQ Nordic (aka JoWood).

Kinda like a linear Freelancer, but underwater and with no trading.
Still good though.
Man I wish Freelancer got a remake.

This game takes place in a post apocalyptic world where humans are forced to live below in the ocean. You control a submarine and battle enemies. The graphics are nice and the controls are tight. Exploring the ocean feels realistic. Character development occurs across the game with interactions between you and character's voices. You'll be upgrading your sub and going on main quest and side quest missions. This is a fun adventure game that I can recommend.