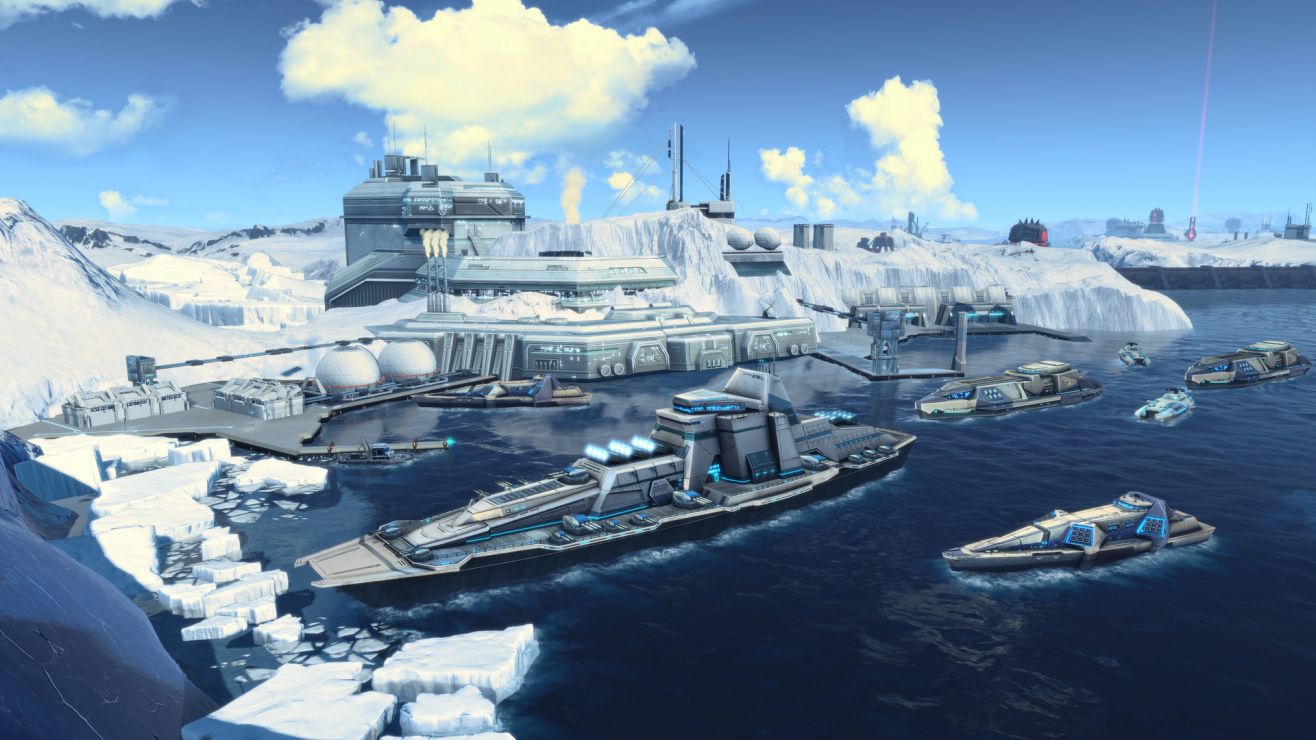 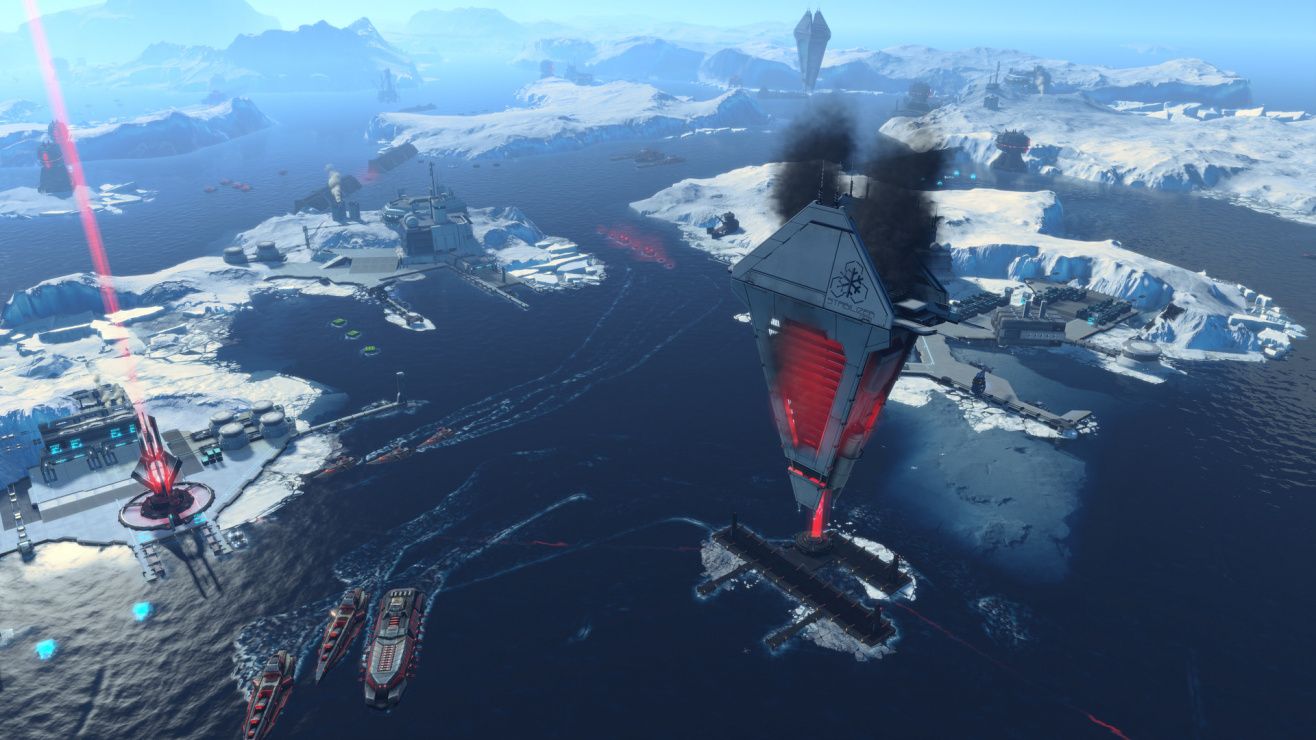 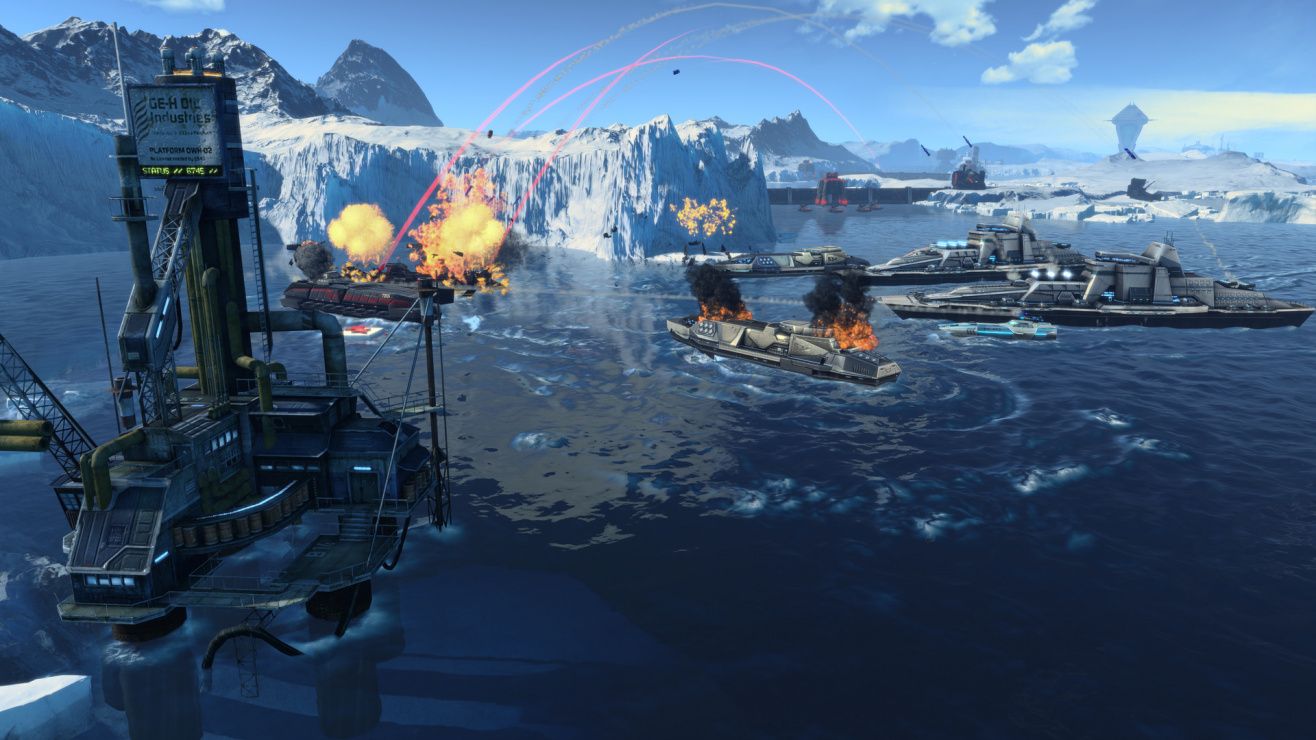 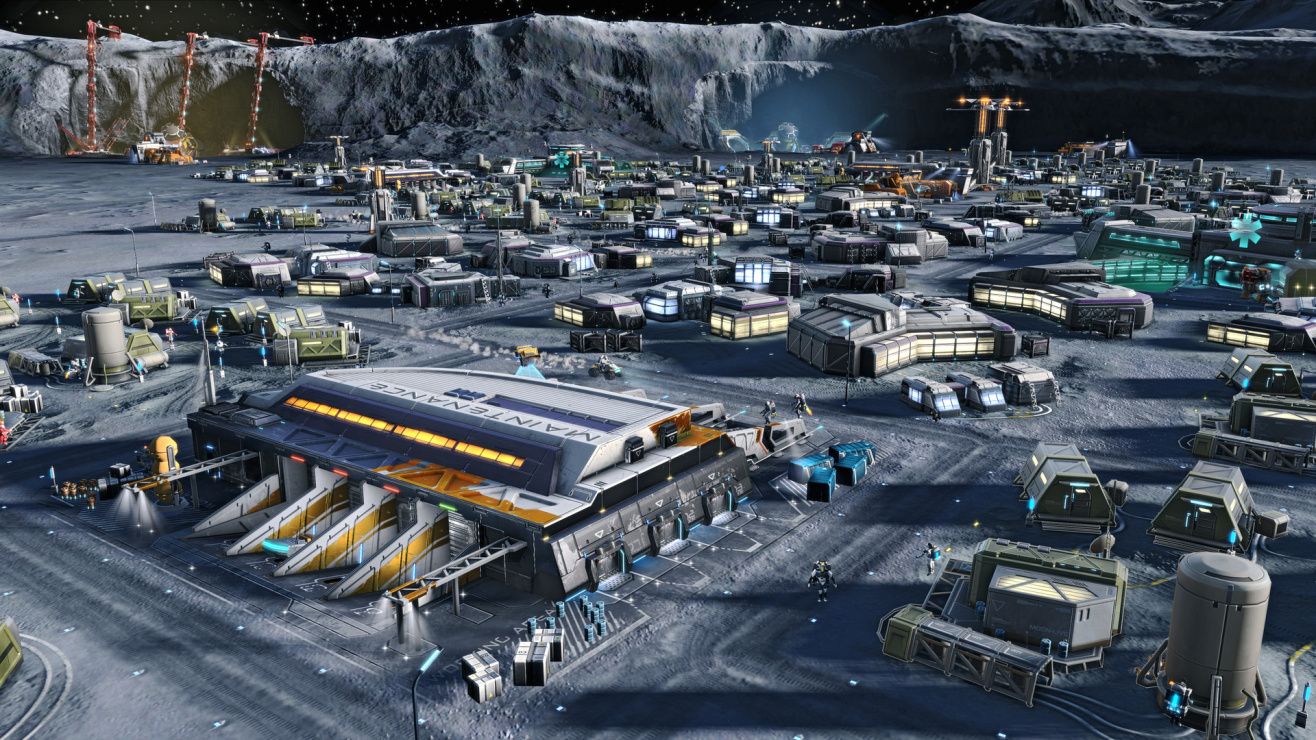 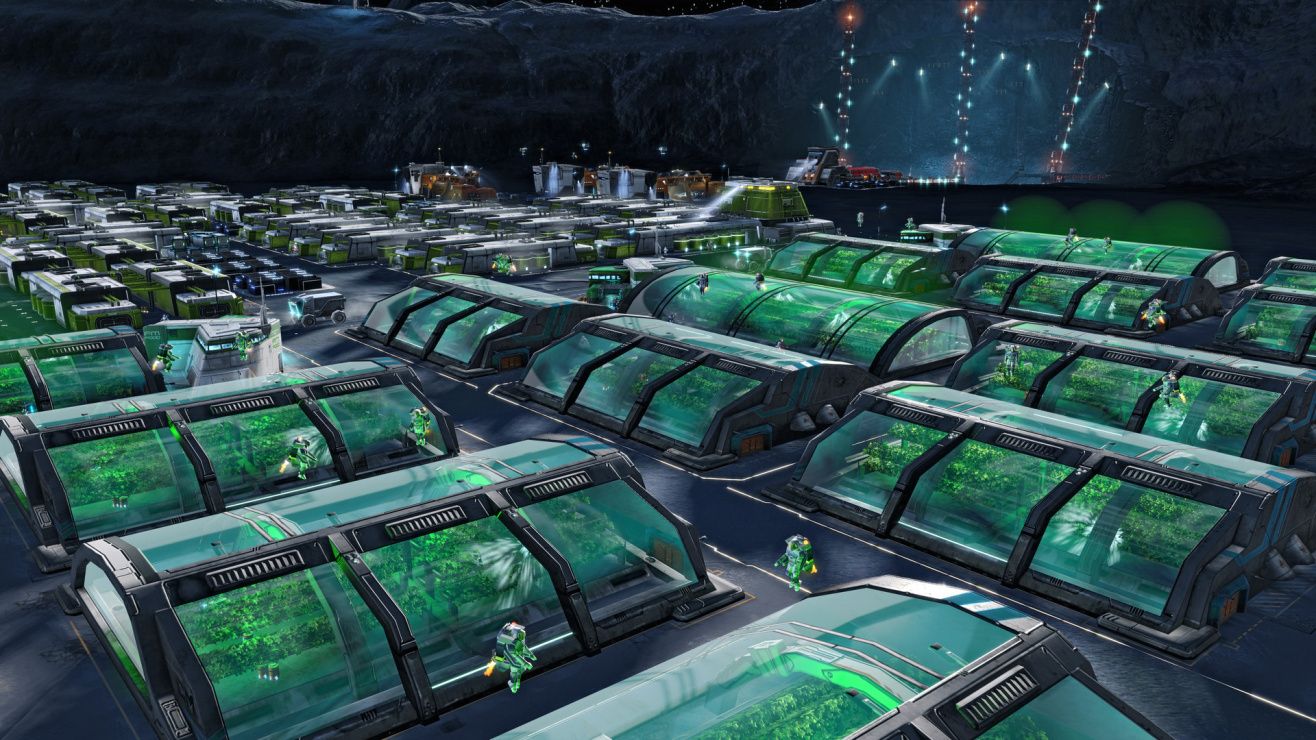 builder city economy futuristic sci-fi simulation space strategy
Anno 2205™ – the beloved city builder takes off into space! In Anno 2205™, you join humankind‘s next step into the future with the promise to build a better tomorrow. You conquer Earth, establishing rich, bustling cities and grand industrial complexes, but to secure the prosperity of your people, you must travel into space. A scientific breakthrough in fusion energy promises to revolutionise all aspects of society. The necessary isotope, helium-3, can only be found in harvestable quantities on the Moon. Venture into space and settle on the Moon in the thrilling race for resource and power. Anno’s masterful economic gameplay is back and taking strategic city-building simulation to new heights, launching into space!
Share Share Share
Promote for 50G

I know, it's not usual, but I never played any Anno games before 2205, so for me, the world and the habits of the game were a totally new experience. Maybe also in that matter, I was genuenly amazed by the detailness and especially by the graphics of this game: Anno 2205 is one of the most beautiful graphics among all the strategy games I ever played. As my profile shows, I'm mainly a strategy game player, so in that aspect, I trully believe, no one will be disappointed by the looks of this game. The only downsides are the battle missions, wich are needlesly long and not interesting enough, mainly because the corporation building part of the game is much more refined and with the 4 different types of locations and resource gathering mechanics it's a nicely complex experience. I totally recomment this game, just the 4k camera fly views alone worth the price - wich will need a relativly powerfull machine to run :)

I don't normally do reviews, but thought I would do one for this game.
Firstly, this is not really a comparable anno game. Its more of a relaxing city builder thats about enjoying the atmosphere and seeing your city develop. Its not going to challenge you in the same way anno 1404/1800 might and there are very few ways to totally lose.
That doesn't make it bad however, as it, without any doubt, has the best music, graphics and atmosphere of any anno game. Its also a lot more laid back and relaxing, and as someone who usually sticks to grand strategy that can be a great thing. It's fun, engaging, beautiful and overall just a great game.
Basically, its a awesome game and my fav of the series, but shouldn't be judged as an anno game.
8.5/10

This game is amazing. It makes me think about our glorious future as humanity and also it makes me wish to become scientist and move forward our progress together with others. I definitely recommend this game because if it inspires you to do something great then it's definetly worth playing.

Personally I am a big fan of the Anno games, I have hundreds of hours on 2070.
2205 is a very different beast, it is on a much bigger scale. The graphics are beautiful, the music is soothing and the general city building and logistics are very well executed.
The only down side I can find is the combat. Strategical engagements take place away form the city's and is more of a puzzle than a fight. It is no real challenge at all.
That being said, despite of this, the game is excellent. They have concentrated on what makes Anno a brilliant economic strategy game and have added new mechanics such as a decent stock market and more environmental challenges based on the sector you are in.
8/10

I would have to say over all I would give a good review, BUT!
This is my first Anno game, and there are many glitches/problems with the game, that Ubisoft should put a tiny bit of effort in for fixes(these should have been fixes years ago).
The graphics are enjoyable, the game a good mashup between Civ and SimCity. Not a huge story but what is there isn't terrible, its just not a big story line/arc.
Pro's: Game plays pretty smoothly, and as you start learning the flow of it you get the hang of it(set a time if you want sleep)
-It doesn't destroy your computer to run, even with UCRAPImeanplay
-I love the day night cycle, and doubly so the ability to not only turn it off, but pause it at what ever part of the cycle you are !
-The farther you get the more areas open up, and gives you the lure of going to the next place...but it teaches you quickly you have to really build a super foundation before moving on, and every placement matters in the long run.
-Each sector is different, design, goods, layout, limitations etc.
-Over all, its a well made vision of exactly the thing i wanted between SimCity and Civ. While i like those, but the perfect combination of juggling buildings, finances, commodities and layouts and different sectors.
-This would be a great series to be able to colonize multiple worlds, one sector at a time, building a space station, deciding if moons and planets have the proper resources, building appropriate ships etc. Ubisoft would have to really put true effort in, but they could pull it off.
Cons: Glitches, there are a bunch.
-Trying to grab building, which half the time or more you have to multiclick to move.
-Deleting an areas higher leveling dwellings and the warning keeps giving a zero for locations needed resource(lab, PD, theatre etc). In order to reset it, restart the game and usually works, though sometimes you have to delete that location and rebuild after restarting again.
-scrolling, get used to it. When going into a sector, you will almost always zoom in when scrolling out.
-Easy to hard, barely feel different. you can barely tell the game is on any of them unless you are playing the "hardest level", which means you cant move buildings.
-While I get the lure of pushing things forward and getting to the moon, they probably should have waiting a little longer "in game" to reach where you could get to the moon, especially with how ridiculous the cost is.
-The pop ups, dear god so help me i want to punch who ever designed the pop up layout. Shove a pop up in my face and you irritate the hell out of me especially when you dont give me even a semi decent way to get it out of my face
-Not only are there a ridiculous amount of calamities(the same number from normal to hard almost), but after fighting enemy ships for the 50th time in your sector, and not only beating them in theres, and destroying their main base, they act like it never happened. On top of that, quarter to half of the time, a new calamity is starting either right as one is ending or right in the middle of another. There literally are to many calamities on the normal and easy, and hard, while its about right, im tired of fighting the same guys hour after hour, same thing over and over again, with low visibility.
In the middle, but needs a little more assistance, is the tutorial. A lot of things (really important ones too)i had to figure out on my own, because the tutorial kinda just says "have at it" with a few hints along the way that kinda eh mean something.
TLDR: Enjoyable, time waster/sink(seriously set an alarm clock so you dont play for to long), but there are a lot of bugs that probably wont ever be fixed, but most have ways around them.

I don’t understand the negative reviews. There are many complaints regarding autosave, which must have been fixed because that isn’t a problem for me. Other negative reviews are based on comparison to previous Anno versions. I haven’t played previous versions, so I dunno about that. But I will say it is far more entertaining than Cities Skyline, more awesome and simply better IMHO. I found Cities a bit tedious on resource management. I know that’s an integral part of the game, but not to the exclusion of all else.
Here’s a few quick pointers that made my early experience more enjoyable. Learn/modify your key bindings in settings. I found myself using copy mode, relocation mode, and rotate building extensively. The various camera view options are really cool, especially rotating the camera around current position. After I achieved balance of resources, I zoomed in and set the camera to rotate in the middle of my town with “promotion” set to automatic. Watching the buildings upgrade automatically as the camera rotates is awesome! There is no denying the sheer beauty and elegance of the graphics, particularly on zoom in. This game is fantastic! I look forward to many more hours with Anno.

After owning this game for almost 2 years, I finally had the time and motivation to really dig into it. I have to say it's been an enjoyable adventure. Now, I'm addicted to it and find my self having to limit my time spent with it. I've enjoyed discovering the new levels and what they unlock for you.