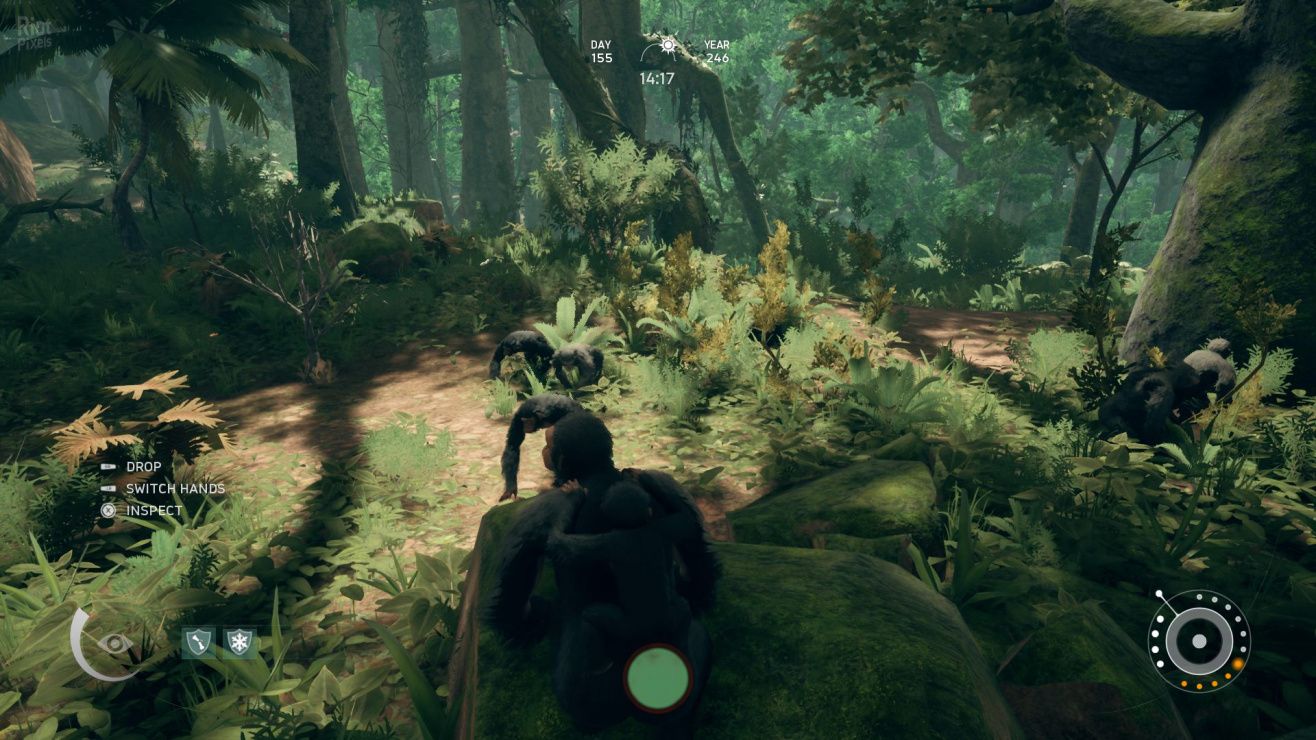 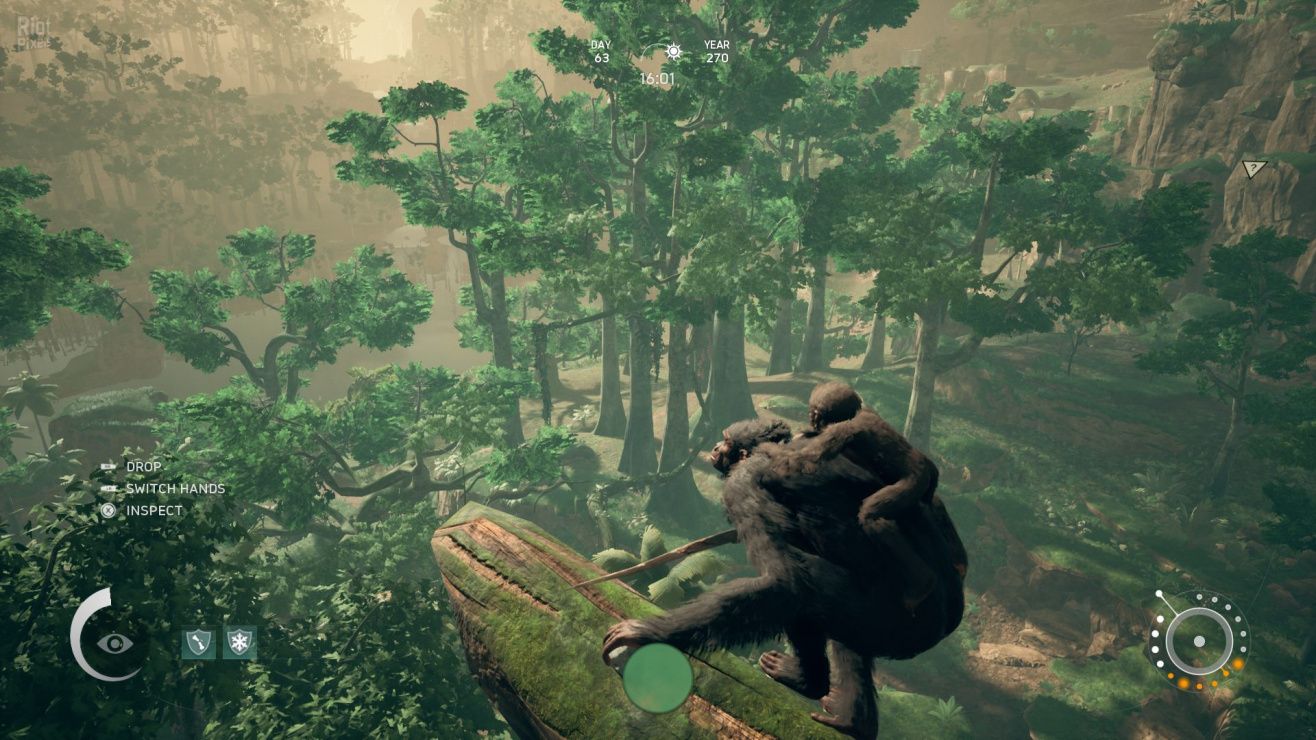 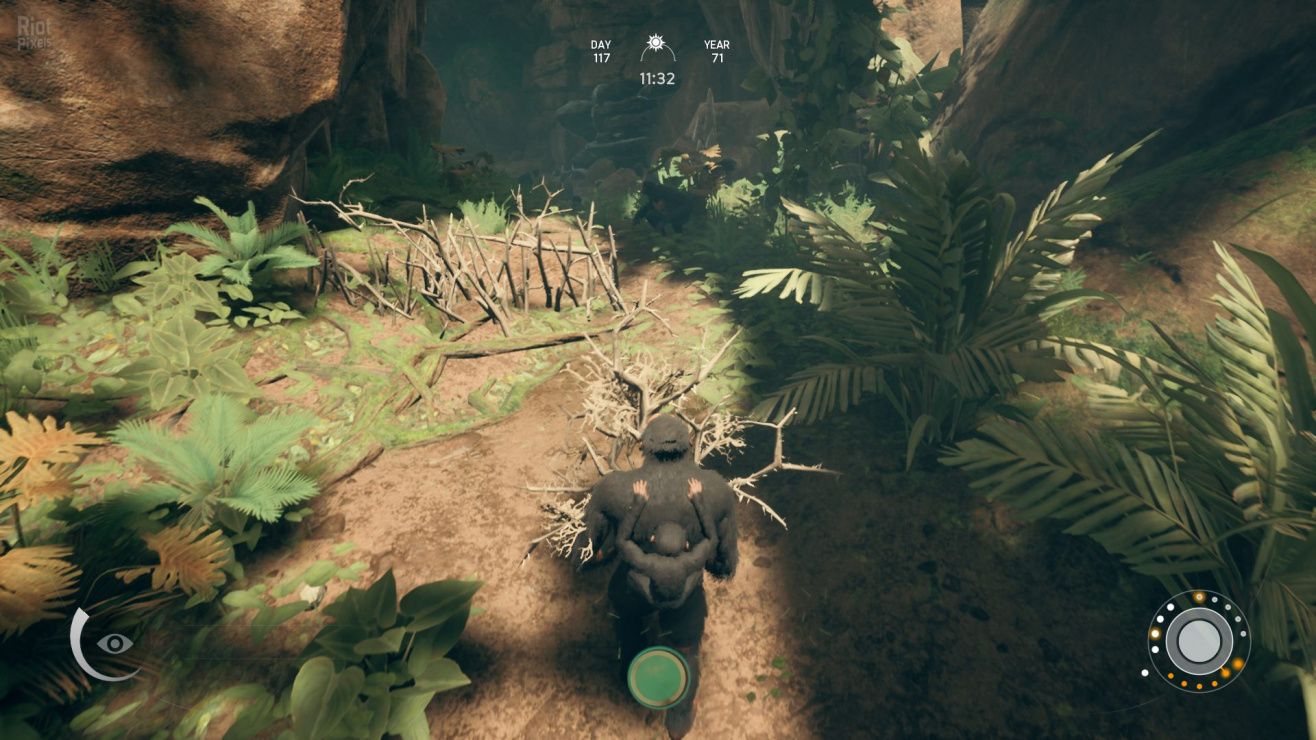 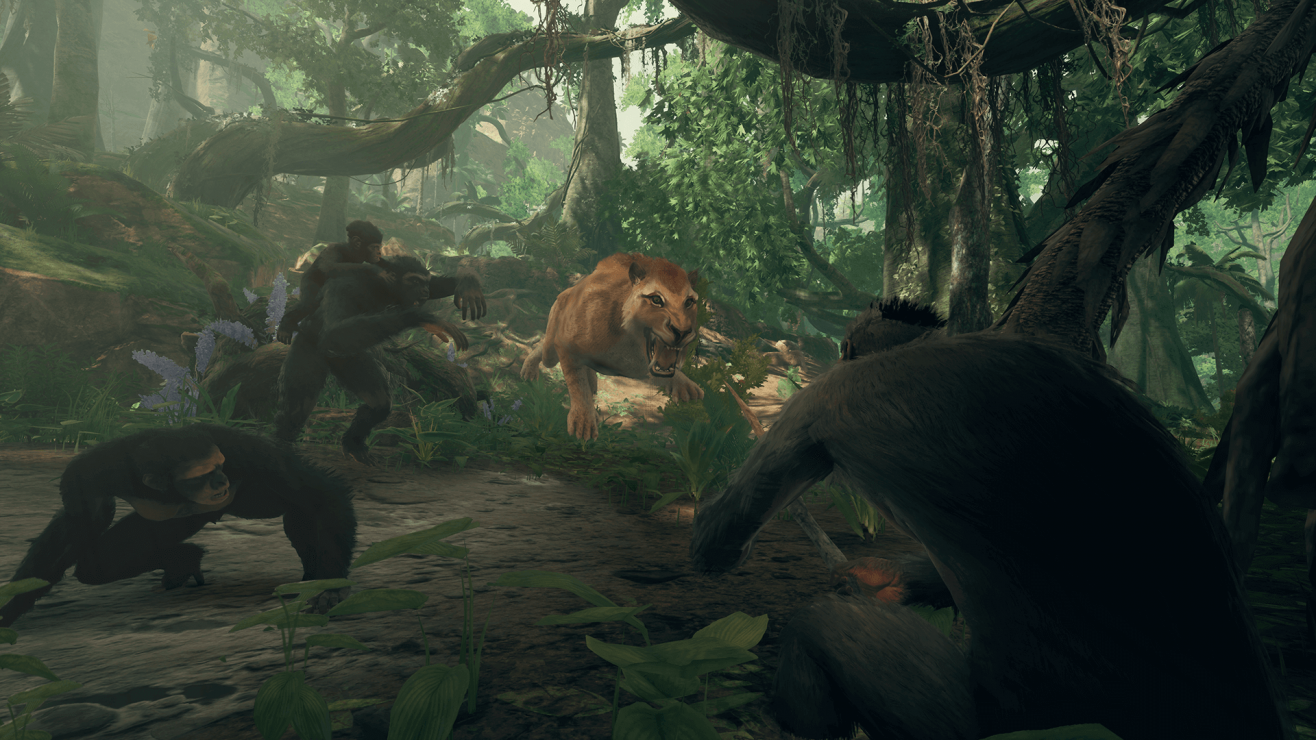 PC Steam Console Playstation action Xbox indie adventure singleplayer rpg survival ancient jungle prehistoric
Ancestors: The Humankind Odyssey is a third-person open world survival game where you Explore, Expand, and Evolve to advance your clan to the next generation in this exhilarating new adventure from Panache Digital Games. Embark on the most incredible odyssey known to humankind: human evolution. Spanning from 10 million to 2 million years ago, begin your journey, before us, in Neogene period Africa. Explore a beautiful yet ruthless world, from swinging through tree branches in the jungle to stalking prey across the golden savannah grasslands. Decide what attributes to learn and hone in order to pass down knowledge to future generations, from crafting tools to enhancing evasive tactics against predators. Just like real life, make sure to eat, drink, and sleep to stay alive and have the energy to face any danger that may come your way. Grow your clan and find strength in numbers as you progress through critical evolutionary stages of human evolution. Your choices will write your clan’s story and determine if you can survive your evolution.
Share Share Share
Promote for 50G

UPDATE: Now that I've beat the game, I still recommend the game with a caveat; the game is still very repetitive up until the end and meaningful progress is very wide spread. Get meteorites asap, and you only need about 70-80% evolution progress to complete the game.
Play with full hud and full tutorial your first time through, it's actually mind-blowing how many reviews that are not recommending the game say the game doesn't tell you how to do things when it gives you a full tutorial card you need to manually dismiss. Just a few examples of things I know for SURE had a tutorial or makes sense:
-"For example I was asked to make a sleeping place... but crafting had not been explained to me." This has a tutorial, and not only that but it kind of makes sense you'd pile up a bunch of leaves.
- "Almost every activity in the game is a sort of sound based QTE deal..." Most QTE's rely on the borders of the screen getting a rainbow effect and if you're playing on gamepad you also get a vibration most of the time.
-"...but with fighting I have no idea what to press and when, and the game doesn't bother to tell you anything." The game literally has two separate tutorial cards telling you that to dodge you hold A while moving away and release at the right time and that counter attacking is the same except you move toward the attacker.
-"My first ape almost died of exhaustion as he didn’t know how to sleep... " At no point do you need to inspect to learn to sleep, you just do it at your bed. You can also hold A to lie down anywhere with an empty hand and sleep on the spot.
-" I managed a few more objectives, groomed a mate, but had no idea how to make a baby. My instinct told me we had to copulate, but, apparently, these animals don’t know how to do that..." This one doesn't have a tutorial, but it's fairly obvious you need to go to a resting spot (aka a bed) and experiment, finding out that you need to call your mate.
-"I wasn’t planning on watching endless youtubes just to figure out where to go and how to solve what." 10+ hours in and haven't looked up a tutorial yet, personally.
I will agree though, that this game is very repetitive and people will find the controls clunky (personally I got the hang of them pretty quickly, a lot of your context actions depend on you either moving, standing, having your dominant hand free or both hands free) and there isn't enough variety. There will be one or two new animals per biome the further you go, and there's a good amount of redundant items (fruits) and the crafting is still rudimentary where I am in the game. The core gameplay loop makes itself very obvious very quickly so you need to really enjoy exploring the environment itself.
However, I've never played another game like this before, where you need to learn EVERY system from the ground up by experimenting and learning. It truly gives you that feeling of being a monke in the forest, afraid of everything but slowly evolving similarly to our ancestors.
I'm going to spoil the gameplay loop for you guys, if you're still confused:
-Have as many babies as you can (I seem to keep capping out at 6)
-After your female apes are infertile, play as them because they can't procreate anymore
-Saddle up with two babies
-Explore your area, discover landmarks (diamond shaped markers)
-Level up enough to take advantage of all your reinforcements
-Repeat all steps until you need to go further from your settlement to discover stuff, at this point move your clan to a new oasis
-When you complete a bunch of feats in your evolution tab, evolve your species. This is the true goal of the game, catching up to the modern era, and every feat you do (discovering areas, fighting animals, discovering things, etc.) gives you bonus years that moves you further down the timeline. Evolving also cements your mutations that babies provide after they make it to adulthood/ elder status.
The WHOLE point of the game is that you're supposed to figure everything out from the ground up, experimenting with every little thing like a dumb ape. If there was a tutorial and index for every little thing possible then it'd defeat the purpose.

This game is the perfect example of an interesting concept being executed with thought and care; resulting in an incredibly unique adventure experience.
Is this a game for everyone? No, it is not. However, if you enjoy games that involve exploration, experimentation and logical puzzle solving. You will definitely enjoy this game.
The core of Ancestors: The Humankind Odyssey is that you are starting as our earliest ancestors and exploring, experimenting and evolving over millions of years until you eventually become the earliest relatives of HomoSapiens. The game doesn't hold your hand, you are responsible for learning the various actions and interactions with the world and the objects in it.
The game thrusts you into the same mindset of our early ancestors. You want to make a sharpened stick? Well, you are going to need to figure out the interactions required to do it. But you aren't done there, as you get more comfortable experimenting with interactions, you may find ways to refine the process and in doing so you will unlock the neuronal potential of your chimps. Essentially you are growing alongside your chimps; as you figure out more about the game and its processes your chimps evolve and adapt more and more to their environment and move ever closer to becoming early humans.
Visually the game is beautiful. Never once did I get bored exploring the massive game world presented to me. Many times I was actually awe struck by the beauty and immensity of it. I still remember when I was out exploring trying to find a better settlement for my clan and crested the top of a rock formation to be greeted with the sight of the Savannah sprawling out before me. I remember excitedly making may way down to try and explore this new biome, only to have to retreat battered, bruised, and bloody because my chimps were ill adapted to this new environment. I also remember the immense satisfaction I felt when I evolved my chimps to better handle this new challenge, then returned in force with my clan to claim our new home.
Overall, this game has become one of my most memorable gaming experiences. I loved every second of the 70 hours I put into it. Is it perfect? No, there are some bugs and there is some jankiness here and there. Sometimes trying to figure out how to trigger a particular evolutionary path can be frustrating but with the exception of one (I won't name it for spoiler reasons), they were usually intuitive and left me face-palming when I finally figured out what I needed to do.
If you want to experience an epic and immersive adventure that is tied directly to our own heritage, I HIGHLY recommend this game.
EDIT: One thing that I guess needs to be added is that if you are the type that can't stand playing a PC game with a controller, then don't bother. This game requires a controller for maximum enjoyment.

This game is a radically new way of telling the oldest story. My biggest gripe is that nobody told me it's intentional to not have a clue how to play. The game is designed to make you learn just like an ape from 10 million years ago. You're taught how to walk and climb, and that's about it. Everything else is banging your controller (which is nearly required) against your desk like an ape with two rocks. You're supposed to struggle and be confused and die, because damn Nature, you scary.
There are plenty of resources to help you learn how to play and what to do, but for the full experience, avoid these and learn on your own how to fix the burning bite from the wiggly hissing meat tube.

This game frustrates me to no end. On the other hand, I absolutely love the movement dynamics, the evolution system, the world itself and exploring, and the overall underlying concept, yet at the same time, the game has such clear flaws and missing elements that playing it just makes me sad for what it could have been.
The most glaring of these flaws is the total lack of proper outside pressures on your tribe, be it from scarcity of resources, actually dangerous predators, and most importantly OTHER tribes of apes. As it stands, there is basically zero reason to ever go out of the jungles and explore the map outside of sheer curiosity of the player and the banal desire to "just finish the game", which in itself isn't exactly fun because the game never ups the challenge the gameworld presents to the player, nor do the base gameplay mechanics ever really expand, or interact with one another in any interesting way. For example, you can't place food to attract prey animals to a location where you could trap them or hunt them more easily.
However ,it is the lack of other ape tribes is something I am utterly baffled by, and have yet to find any explanation to why the devs decided to make your ape tribe the sole monkeys in the game. Territory disputes between apes is a big part of their behavior, as was most likely the same case for our ancestors, and the lack of them just makes the game world feel utterly empty. Having to deal with other tribes would have opened up a whole new element of gameplay to the game, which in my opinion, would have improved this game tremendously.
All in all, the above flaws basically mean that once you have figured out the intentionally obscure ways of how the game mechanics work (and unlocked the few that are behind evolution leaps), the whole gameworld becomes your oyster and you face basically zero challenges from the game which ends up making the whole experience dull.
In short, this game could have been a masterpiece, and it has a good idea at it's core, but for some reason the devs failed to implement vital elements that would make the game actually engaging to play in the long term.
Thanks for reading my blog.