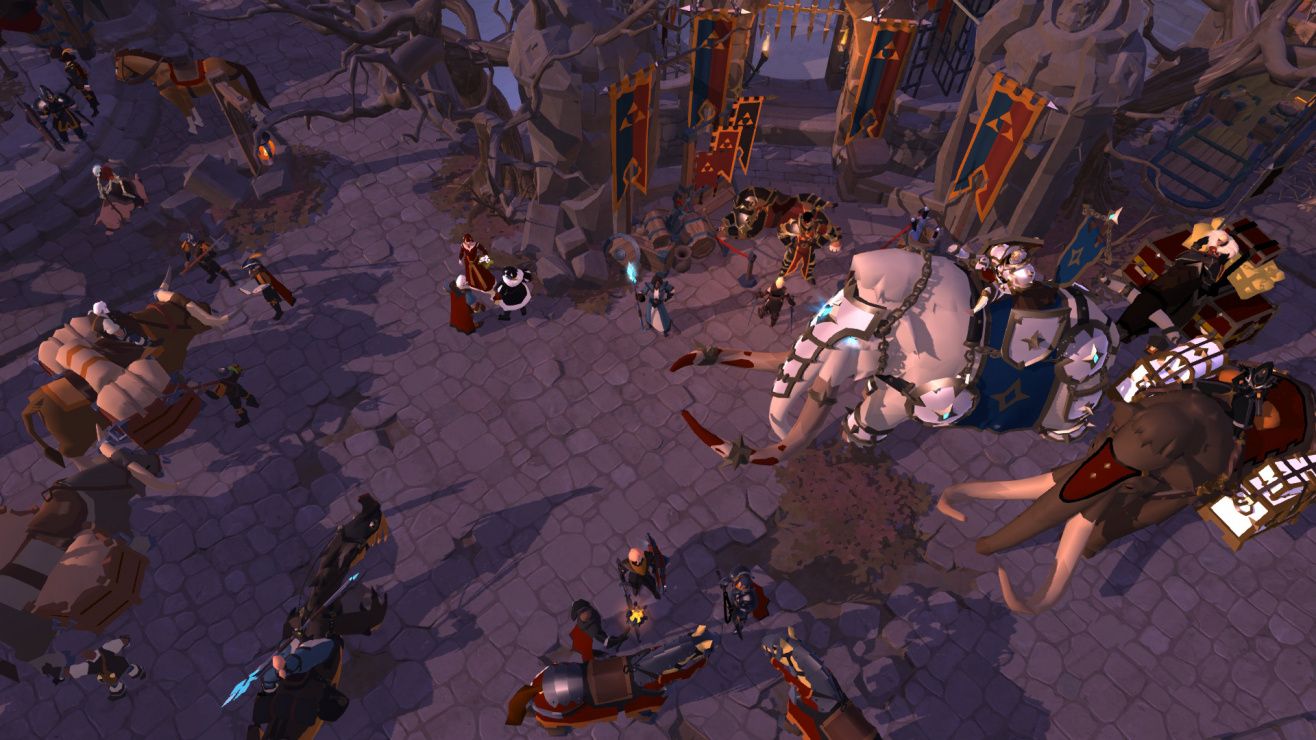 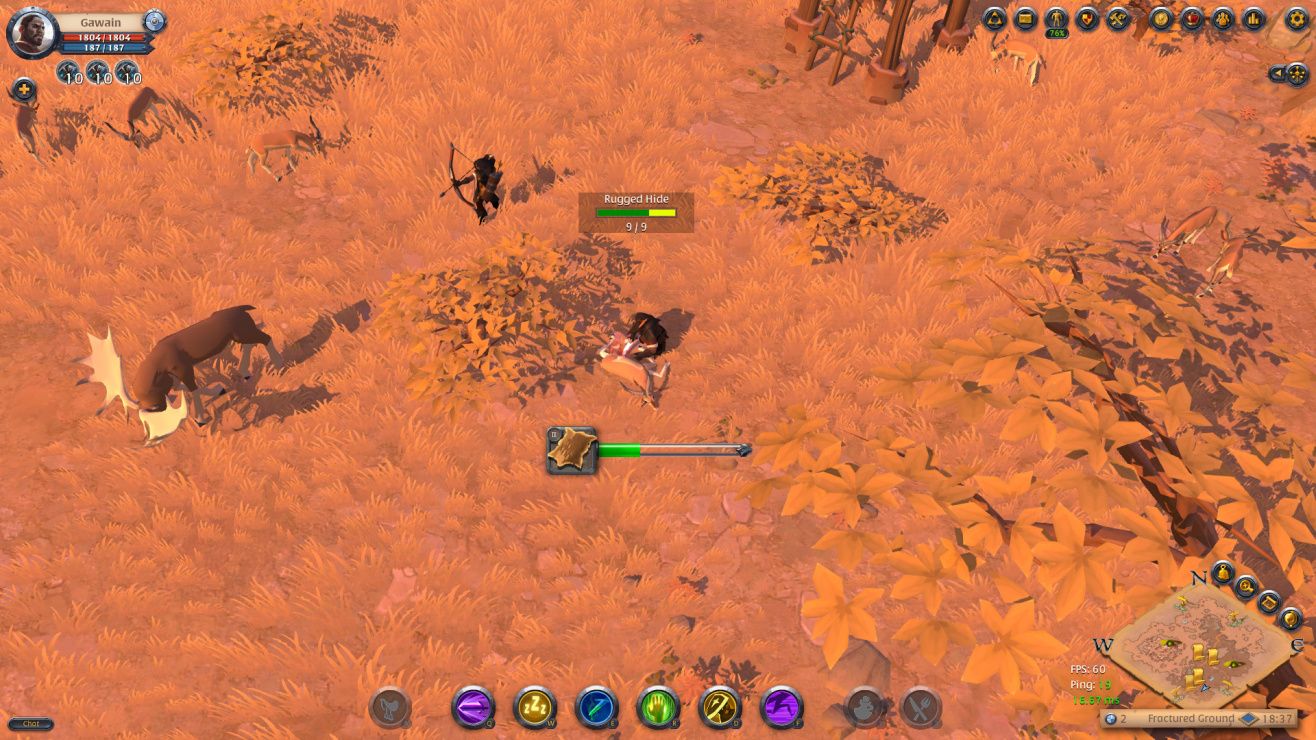 crafting fantasy medieval mmorpg multiplayer online rpg sandbox
Albion Online is a sandbox MMORPG set in an open medieval fantasy world. The game features a player-driven economy where nearly every item is player-crafted. Combine armor pieces and weapons suited to your playstyle in a unique, classless "you are what you wear" system. Explore the world, take on other adventurers in thrilling battles, conquer territories, and build a home. Craft. Trade. Conquer. Dive in now and become part of a living fantasy world where everybody matters. From basic tools and clothes to mighty armors and powerful weapons – nearly every item in the game is crafted by players, in player-constructed buildings, from resources gathered by players. Buy, sell, and trade with other players at local marketplaces all across the world of Albion. Craft rare and powerful items, then sell them to the highest bidder and grow your fortune.
Share Share Share
Promote for 50G

So far, Albion isn't really a newbie-friendly game, but once you get some levels and experience up, you'll get the game to its full potential.
PROS
- Massive PvP battles that are really enjoyable. From open-world PvP, to large 100 people zerg vs zergs.
- Large playerbase, huge guilds, and plenty of things to do as a group
- Sandbox with no quests, but your quest is mainly to be the richest (i guess?), but really cool for me
- Free to play, lots of things to do even if you're not upgraded to premium
- Classless characters, meaning you can go any character, any build, anytime you want.
- Full loot PvP, as I previously mentioned, which makes the game alot more exciting and challenging
- Cross-platform support
- Microtransactions is pretty minimal to none, usually just spend $10 on 1 month of premium or even just earn ingame currency to get your first month of premium
- Conquering of cities, territories, castles, etc.
- Custom islands where you can have houses, farms, etc.
- HUD and UI is really great (for me)
- Most of the items ingame is player crafted
- Gives Diablo 2 and Runescape vibes, with a mix of some Dota 2
CONS
- NEEDS LOTS OF TIME INVESTMENT, it's really grindy to get higher tier items and rare stuff, took me a decent week to max out my gathering skill.
- Player-driven economy, inflation of items are inevitable, lots of players are shit and raises the tax to 999% in crafting stations, and most of the stations in major cities are owned by players and large guilds.
- NOT GOOD FOR SOLO PLAYERS, as a solo player myself, it's really fucking bad to play this game alone. With full loot PvP in the open world, you'll always go against 3 people or more.
- Guilds are controlling the game. In lots of places, guilds own most of the territory and would instantly kill anyone they meet that aren't their teammates.
- Only one server, which is NA. As a SEA player, and the vast majority of the players from EU, it brings lots of us in a disadvantage, especially in PvP
- Toxic af community lol
- Gameplay gets pretty repetitive unless you're in a big guild that normally starts wars and territory attacks/defense
- Really hard to start out as a newbie, unless you got a group of some sort
- Every fucking city is overcrowded, not good for people with low-end PCs even if it has Dota 2 graphics
TL;DR
Every single thing you do matters, large scale full-loot pvp, player driven economy with lots of unfair taxes and prices but mostly normal, you can be any class or equip any item at any time, yet it feels really nostalgic. Lots of frame and ping lag, especially if you're in SEA or EU or any other place other than NA. But a really good game so far, even as a sandbox, it feels like you always have something to do.

So, what to expect from this game?
Pros:
- Pretty reasonable file size for the game
- Quite fun to waste some of your precious time
- Easy to learn basic mechanics
- You hardly need to pay real life $$$ for in game currencies (just get ready to grind all the time)
- Runs well even if you have a potato PC
- One of the best F2P MMORPG
- Lots of guides on the internet on how to get started
- LOTS OF PVP
- Dungeon Raids
- Lots of active players
- Easy for new players to catch up with the veterans
Cons:
- Hard to master
- Guilds that camp on portals on the black zones (Full Loot PVP on all the time) that will gank on you and squeeze you dry
- GRIND ALL THE TIME
- Fixed camera angle (THIS SUCKS)
- No map autopathing (You either have to click on where you want to go, or just hold the left/right mouse button) can be frustrating because of the fixed angle and limited zoom option whereas the map is quite big (THIS SUCKS EVEN MORE!!)
- If you don't research on how the market works first, you can expect big profit loss even after you gathered for hours
- Toxic chat community (on the general chat)
- Scammers guild that preys on newbies (100% tax)
- No fast travel method (teleport only transport you to the black zone)
- You have to save up to 8.0 Million silver/ 3K Gold to get 30 days premium account, to get your own island which only costs 17.0 K silver (But it's worth it, and you only have to pay for it once) just get ready to farm for quite some time
Well, that's that from me, thanks for reading my review!
If you're the type of guy that likes grinding/farming then this a game for you and expect a lot of it!
If not, SHOO! Don't waste your time here, just trust me.
I recommended this game just because it's free to play and P2W is not really an option.
P.S : Please note that this only my personal opinion and I'm only 24 hrs on to this game

Spent most of my time fishing. I heard there was some other content or something in this game, no idea.

I decided to play Albion Online in these corona days. In the beginning, it was a fun game because I had a team that was playing the game with me. With the team, we did many things easily. We went to dungeons killed the bosses and player killers in the red and black zones. However, after 85 hours of gameplay, I realized that being good at this game is very hard. You have to give all your time to this game because in this game you're what you wear. For this reason, if you want to enhance one class you have to enhance items that require to wear. In addition to this, in the game also you can choose to do the gathering. For example, if you want to do mining you have to wear mining clothes. Therefore, it makes the game nearly endless. Always you can enhance yourself and for it, you have to give your time to the game. Moreover, if you want to good at the game you have to play with your friends, with your guild. Otherwise, you won't be able to improve yourself. Another problem with the game is the gathering system. One friend of mine was playing as a gatherer because he doesn't like PVP. However, after level up, the game pushed him to red and black zones that are opened to PVP. Therefore, he quit the game. I am recommending to you play this game if you have free time and a team. If you don't like PVP and you just wanted to do gathering you shouldn't play this game.

Get killed for the first time = "Welcome to Albion" achievement unlocked

After almost 900 hours in game i can say i've found many many ways to keep the game fun and if anyone here is complaining about not having fun because of the PvP zones then you're welcome to contact me through steam and i may be able to give you a hand at finding said fun in a PvP zone without having being the "Best geared Ganker" or the "Strongest person"
Many a times has my group managed to beat down on a large group of 25+ as a 8 man strong and that's where i find the most fun.
Contact me. I will do my best to help.