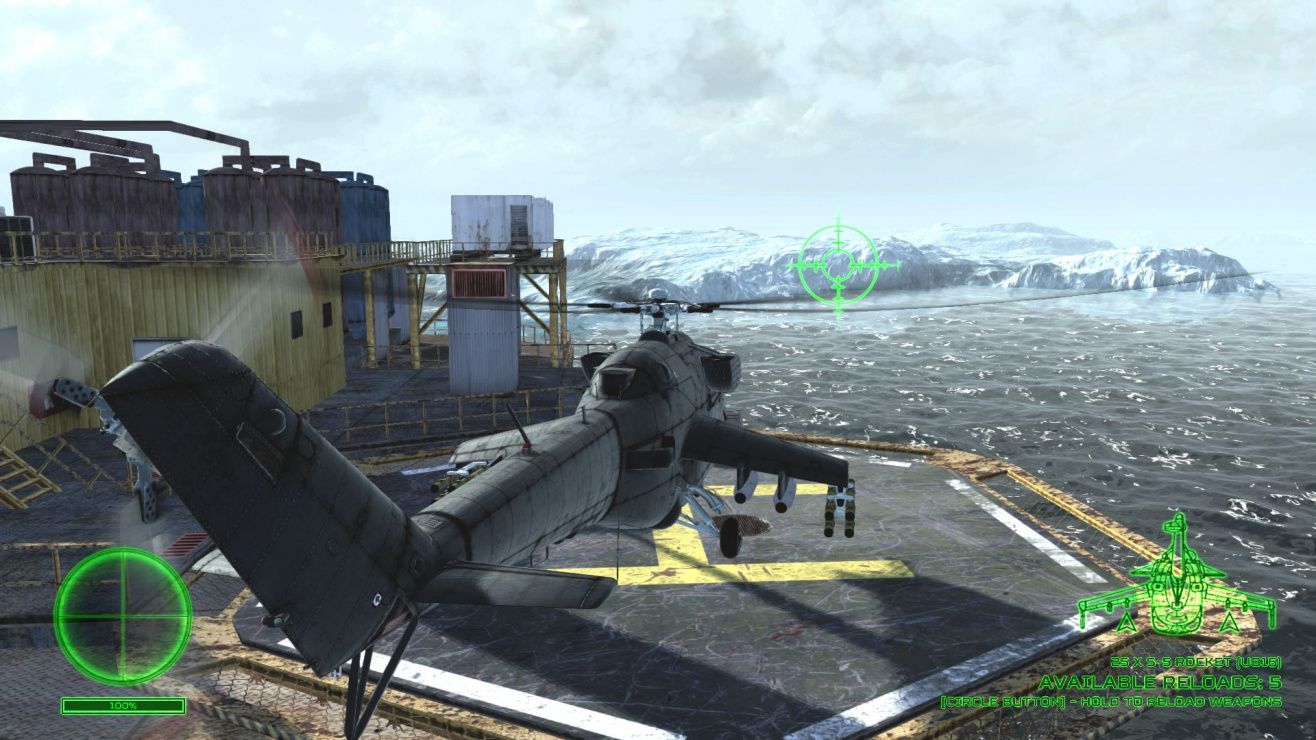 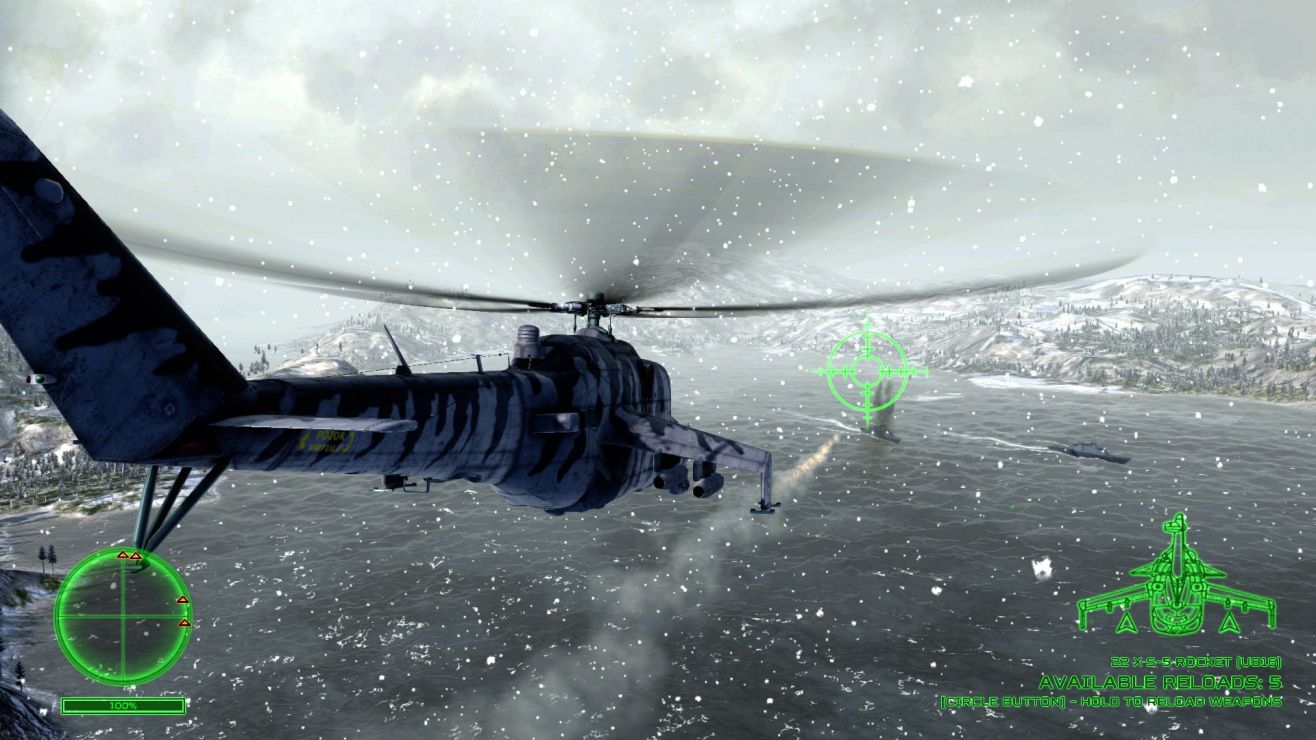 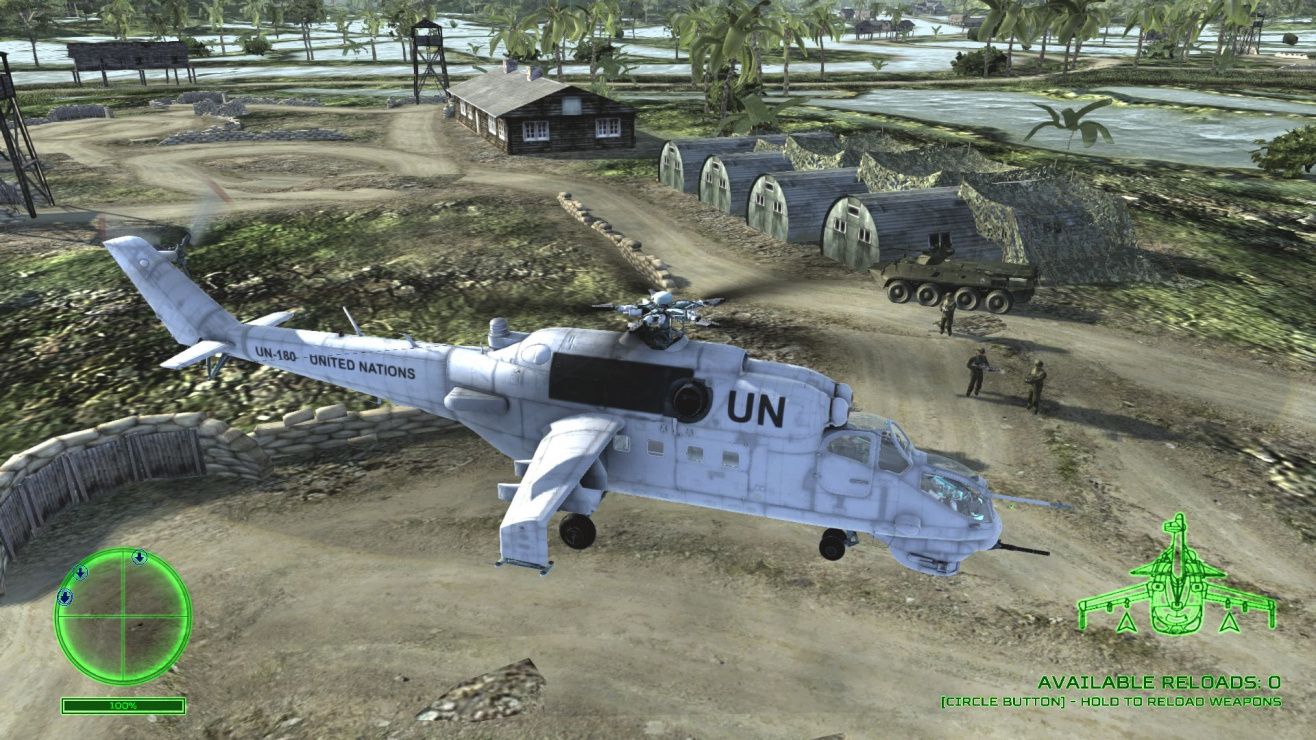 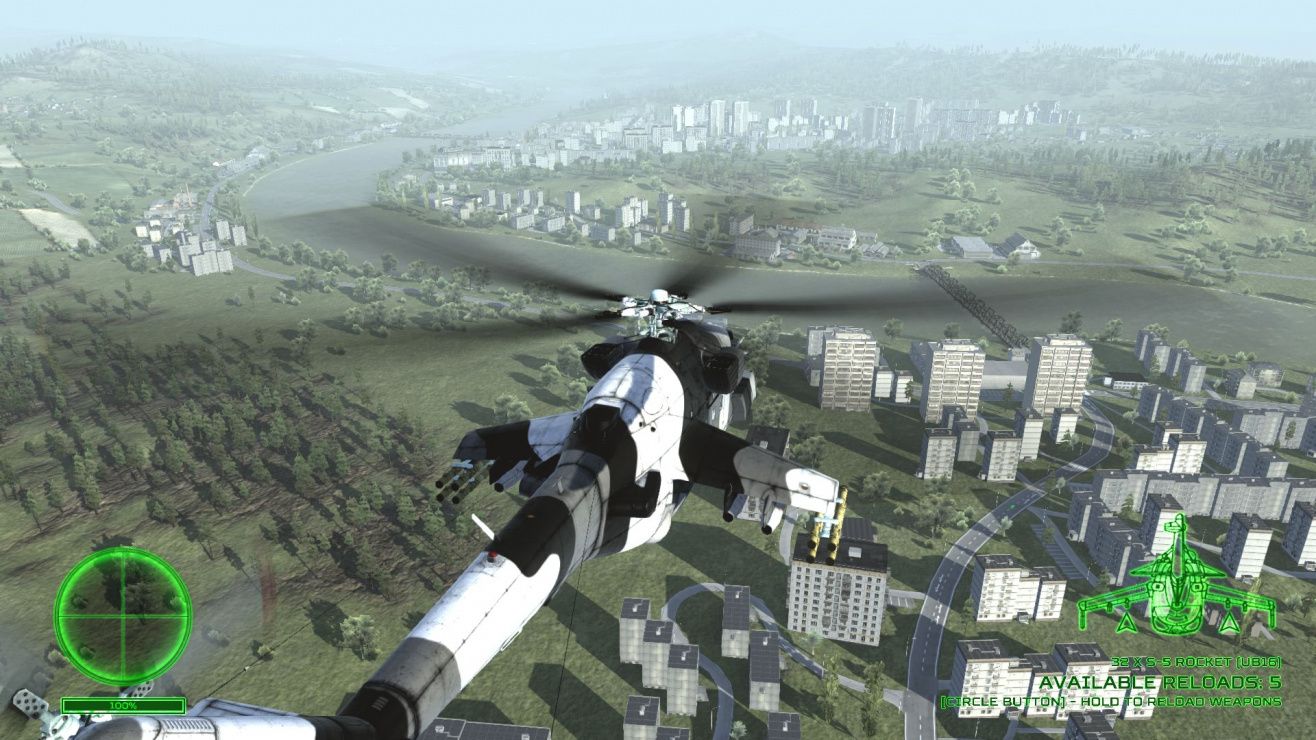 You get to fly around raining death on the mujahadeen while bankrupting the soviet union... whats not to like XD

I really enjoy Air Missions: HIND, The game isinst realisitic but it feels like a simcade game and thats okay, before we got helis in WarThunder I loved playing this game and I still do, I wish there was more Helicopters and more missions this game could have been more but im still happy with what we got in the end, fantastic game highly recommend it.

This is a mixed arcade/simulation game that works very much on the flying feeling and experience.
It is one of the few flight sims, if not the only one, that wants to recreate the graphical and emotional feeling of flying a war helicopter.
Grass that tremble pushed by the rotor wind, realistic mountains (the game make a large use of the DX11 tessellation feature), Realistic cities, realistic water and pyrotechnic explosions, plenty of clouds, water shock waves when a missile hit the sea, much of beautiful trees and forests, snow and night modes, are the distinctive traits of this game.
For many aspects it is too arcade (no damage model, only health bars), but it "feels" much more immersive than other (old) heli sims like Apache/Havoc or Comanche/Hokum.
Despite the arcade nature, that anyway means fun, the flight model is substantially correct, altough not including effects or features like autorotation or gyroscopic effects (being absent the damage model, the tail rotor will not ever be destroyed, so you never will have to fight against rotor gyro effects physics, and so it is impossible to know if the physics engine support these features), but here too the feeling of piloting a real, heavy war heli is present, and in a massive mode: the inertia is damn good modeled, the helis feels really, really heavy.
For the Deluxe Edition, I really cannot say to have noticed more than slight differences between various helicopters flight characteristics (Mi-24, Mi-8, Mi-28, Ka-50), and this is bad, altough graphically they are superbly realized. Sure the mass of the giant Mi-8 is well perceived, though.
Finally, the flight controls are the same for all helicopters, meaning that there are no interactive instrument panels; this is the biggest unrealistic thing of the game, and is a pity, since the helicopter interiors are graphically excellent.
As for the weapons, there are plenty of them, and they will be gradually unlocked progressing in the main 18 missions campaign. Here we have a better situation: graphically very well modeled and textured, they are also very different in both graphical and damage effects. Wonderful the ability for all the helis to switch to gun control mode, that allows manual gun orientation and targeting while in flight, hovering mode, side gun turret modes, and the support for pilot guided missiles (like AT2-Swatter ones).
The only real problem of an otherwise successful project, is the presence of a single, 18 mission campaign plus 15 single missions. Fortunately there are actually an editor and moreover something like 50 or more mission on Steam Workshop that partially saves this aspect of the game, partially because being realized by hobbyist enthusiast users means that often they are too difficult or having other playability problems. I hope very much that the developers will take into account to add some campaigns in future versions or at least in some further DLC.
Last but not least, the military units present in the game are really few: 4 or few more helis, 1 airplane, some tanks and armored vehicles, some rebel technical trucks, some soldiers, rebel troops, two ships and a submarine. Here too an extension in future versions or DLCs would be very appreciated.
Despite his defects, I liked very much this game: for the first time someone is working in the right way, the immersive one, that, for a 3D videogame, should be the number one feature, but it's not always like this, sadly. And thumbs up also for the joystick recognition and control customization: in five minutes I have configured my old joystick with 6 button, throttle, twist rudder and directional hat, without any trouble.
Finally, multiplayer: I haven't find players in online battles yet. I'll keep trying.

Air Missions: Hind is one of those easy to use flight sims that do not compromise realism.
If you are a helicopter flight sim fan this game is a must for you.
The flight dynamics can be adjusted to suit your playstyle from arcade to flight sim.
To maximize your playtime experience, get all the DLCs, which will allow you to fly three other helicopters: Ka-50 Hokum, Mi-8 Hip, and the Mi-28 Havoc.
On a last note, I would compare this with Buka's Fair Strike without the difficulty of trying looking for your mission.

this game has all the makings of a excellent helicopter game. it is a awesome helicopter game but if you added a story mode of some sort and missions that had some more depth this game would be better. there isnt enough helicopter games and this game nails it, i just want more of it. more helicopters, more bigger missons, more everything you have put together here. if you wanna fly a chopper and hammer on people with rockets this is your game.