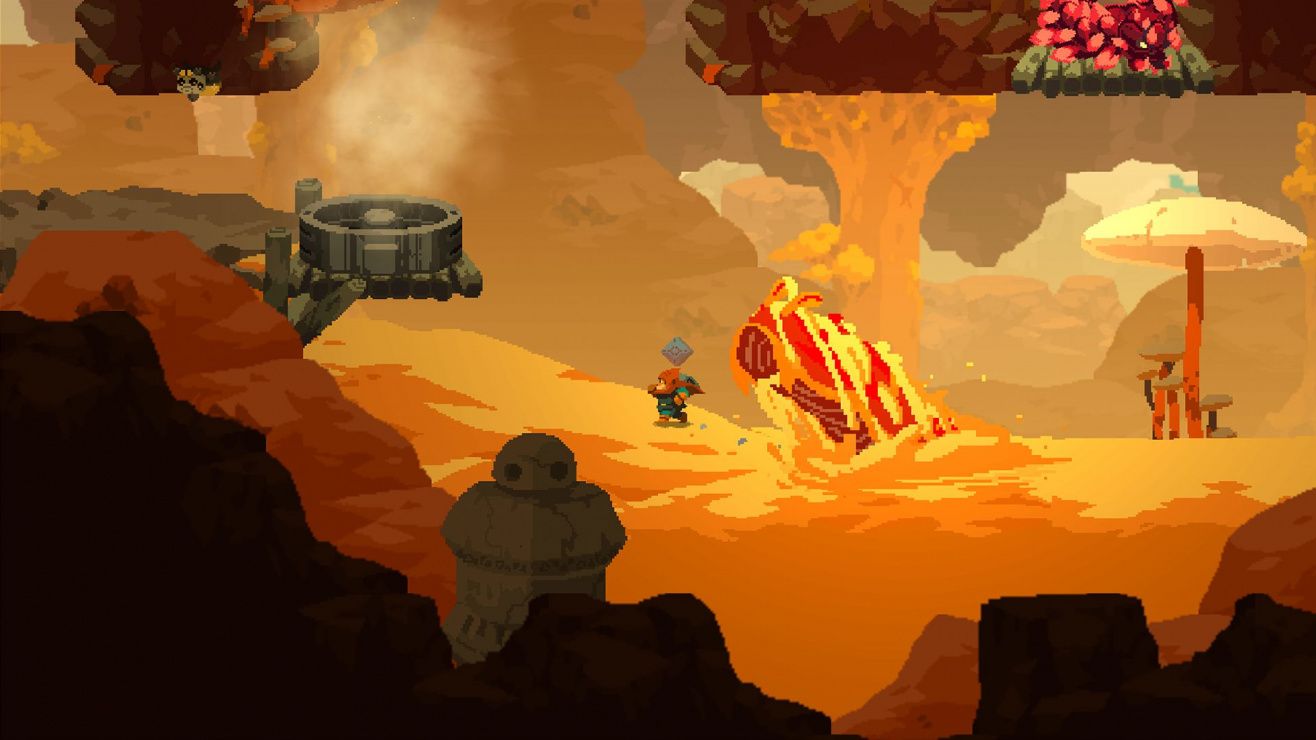 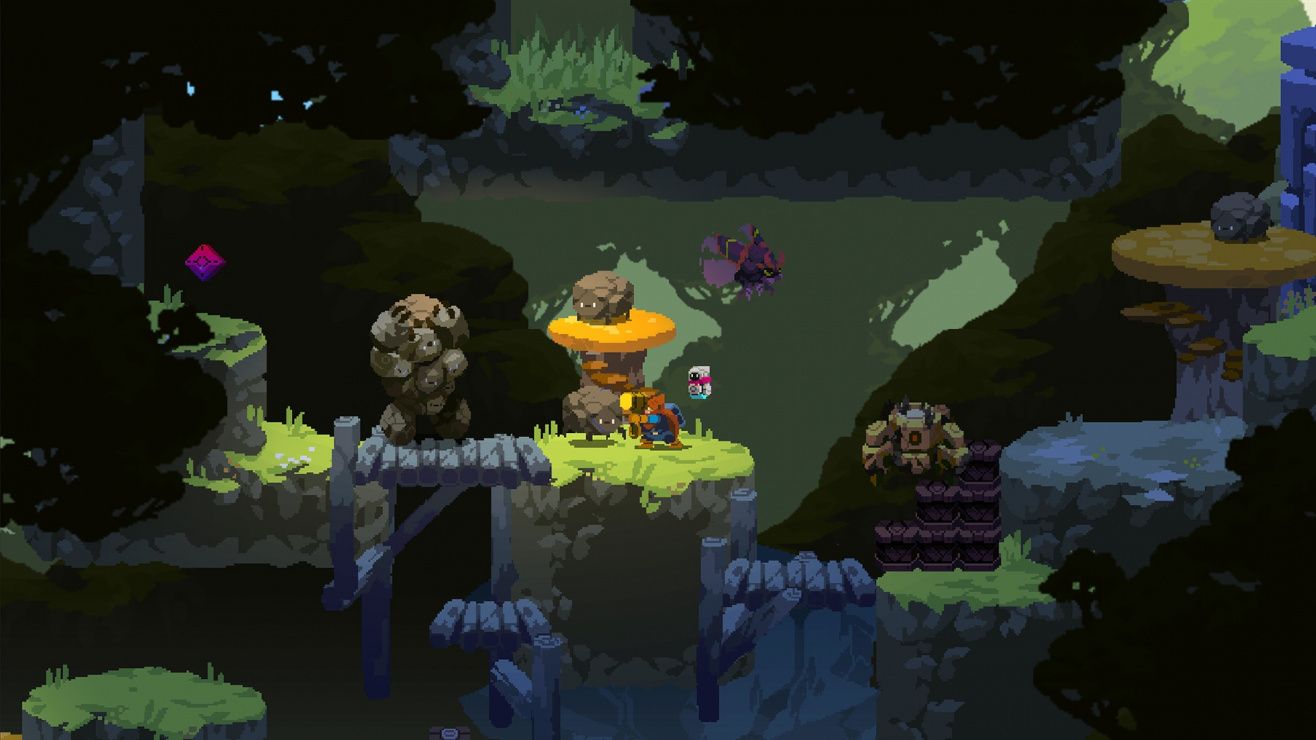 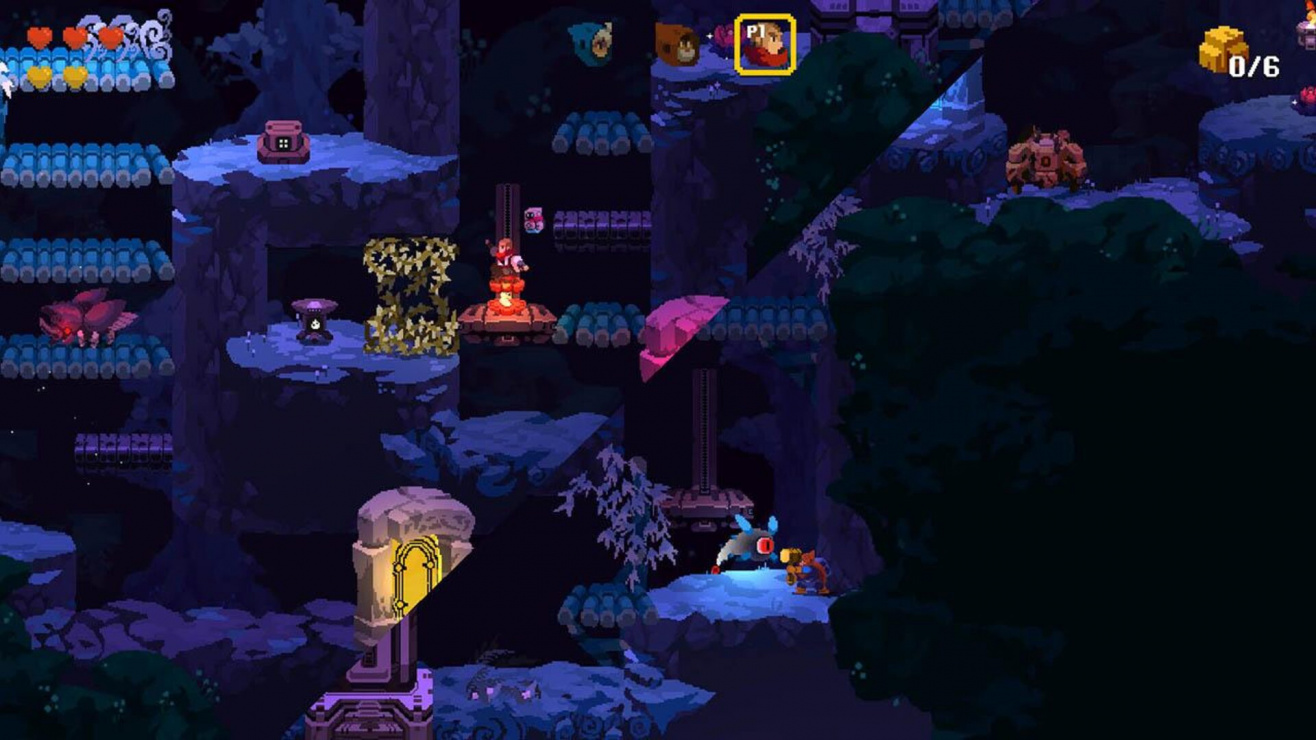 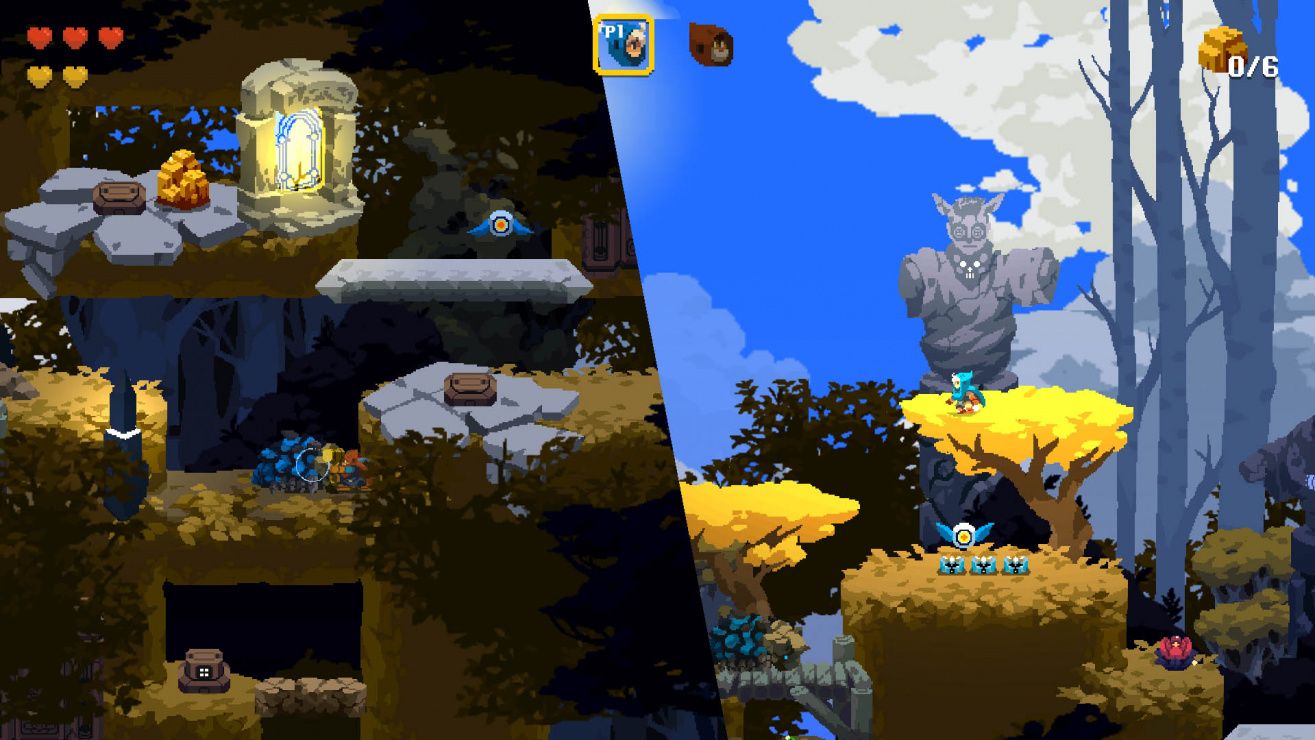 PC Steam Console Playstation action indie adventure Nintendo rpg strategy platformer co-op pixel
Explore, build, and defend in this unique mashup of Action-Platformer and Tower Defense strategy.You play as a team of Ruinhunters searching for the one thing that can save their village - a legendary weapon known as Aegis.Take on wild beasts, ruthless soldiers, and ancient gods in this 2D Action-Platformer inspired by Tower-Defense combat.
Share Share Share
Promote for 50G

An interesting mix of 2D platforming and tower defense. The pixel art is very nicely done, it has a neat story mode, and using multiple characters to get around reminded me a bit of Lost Vikings.

This is a beautiful game, but I hate the last part that needs to be defended and I recommend this game to everyone. It's great in every way and you can use 2 characters in the game.

Aegis Defenders is a platformer 2D game, but the main thing that makes this game special is how developers connect this genre with tower-defense game. This game may look easy to play, but on hardest “insane” level of difficulty it can be challenging. It can be even harder because you can try to get all achievements and end the whole game without a single death (on the second play I did it). The worst thing about this game is the monotony of levels, it’s not a problem though if you want to complete this game just once. There is also a split-screen co-op mode in this game, which isn’t perfect but can give you and your friend a lot of fun, which I think is most important in playing games. The whole in-game story is very easy, with just two plot twists, so it’s good to play in short periods of time. In my opinion, the game is very entertaining, especially when you're bored. It's a good choice to play with your friend with a pack of snacks in the middle. The only con I found is that the retail price is very high, I think it’s a bit too much, but I would buy it, to have this again game and dive into this wonderful, adventurous, pixelated world.

I have just started this game, got it for free from the humble store. Honestly it is super fun, and the music is so calming. With a lot of games they try and build aesthetic and forget about the gameplay but this was really fun and the aesthetic is wonderful. Thoroughly recommend picking this up during a sale, it is a lot of fun with a controller and there seems to be a lot of content, haven't finished it yet!

Took me nearly 30 hours to complete (I'm a single player person) and gotta say, this gets a mega love from me.
Here's the bite-sized info what i think about this game:
- The OST in this game is simply, simply lovely. Calming/soothing and relaxing (Clu's Theme is my fav)
- Graphics are gorgeous. Simple, original (AFAIK) and smooth
- Mechanics are presented to be as clear as possible. It is up to you to hone and improve your micromanagement skills
- Storyline is awesome. Immersive and engaging at certain points (you will get rewarded accordingly when you interact as a response given the situation)
- Quite hard (and frustrating) at all the time some point, as you couldn't keep up with the pace (but you'll get better given time & experience :D)
Here's the not-so detailed summary, so buckle up:
Each levels are constructed as 2 different parts, where the first part is focused on puzzles and second half is where its tower defense mechanism comes to play. On earlier levels, the game design (heavily focuses on the 2nd half of the game/TD time) is purely designed to give us the players time to learn about the mechanics. You started controlling 2 characters at first, each with unique set of skills/combos and defense types. Later in the game, a total of 4 characters will be unlocked, making the game harder to play. To beat this game, management skills are important and i guess that's all i can say for now lol. Cya

-Quick Review-
Aegis Defenders is a 2d part-platformer, part-tower defense game. Developed by GUTS Department, released 2018, and I have no idea how it got into my steam library. I think I picked up a free copy from Humble Bundle at some point.
-Detailed breakdown review-
Story: Aegis Defenders story was... well, my opinion is mixed.
You play as a party of four characters... but you start out with two: Clu and her Grandpa Bart.
They are refugees/treasure-hunters/nomad-types when suddenly they stumble onto a little robot called Kobo who's on a mission and naturally the whole group gets roped in and roped together and you learn the characters' back stories as you progress though the game.
After you finish a major chapter of the game (it's like 3 levels, then a new roman numeral chapter change) there's a short sequence of showcased art "cutscenes" giving the history and backstory of the world.
In this world there are creatures called "Deathless" which seem to be technological-robotic-type-marvels which were eventually worshiped by people as "gods". Eventually the 'villain' Hozai became disenfranchised and led an uprising to put a stop to worship of the Deathless.
The reason my opinion is mixed is complicated, the characters' interactions with each other sometimes get borderline childish... which ONLY would make sense for the 'protagonist' Clu, everyone else seems like they should have better things to do and say then whisper and snicker to each other about dating advice.
What started out as slightly endearing quickly began to annoy me. I think it might be easiest to say that I just really didn't like the characters and the story that much. By the end of the game I certainly wasn't cheering for anyone really... but I had a slight interest on how things could play out and maybe impress me... and I was disappointed in the ending. There was no real reconciliation and just solidified my opinion of severe-indifference.
At the best it gave me philosophical things to rant about.
At the worst it wasted my time between gameplay sections.
Gameplay: I should note here that I only played this singleplayer by myself. It seems like Aegis Defenders was disappointed by my choice, because everytime I started the game I needed to go to my settings and turn off my controller in the player 2 slot, and switch to the keyboard for the player 1 slot. (It probably wouldn't have been a problem if I just unplugged my controller. But I had to do that EVERY time I started up the game.)
Generally speaking, you start each level with some dialogue between the various characters in your party, then run around and 2d-puzzle-platform for a few minutes. Then the level ends with a tower defense game where you build defensive structures from tubes which pour out enemies to the meat grinder.
If an enemy hits you, you lose a red heart. If an enemy gets to the spot you're defending you lose a yellow heart. If you lose all your yellow hearts you lose and need to restart the whole fight again. If you lose all your red hearts you will lose a yellow heart (or need to restart at a checkpoint in the puzzle-platform sections).
You switch between characters, build guns/turrets/mines/generators, each character has a unique set of skills. And you also want to match colors... Yellow turrets do double damage to yellow enemies. Blue shots from Clu's Gun do double damage to blue enemies. But sometimes you just need to do the best with what you have available to you. Each character gets an extra weapon with a different color they can switch between, and you have two different currencies to use for upgrades.
I don't think I'm the best spokesperson for this game's difficulty. I spent 13 hours in total to finish the story. For the final few levels I grew tired of resetting and switched my game to easy difficulty and smashed through the rest of the game.
Conclusion: Generally speaking, I would say I enjoyed Aegis Defenders more than I was annoyed by it. It just needs a few small adjustments and it could really be a solid game. I got stuck hanging onto corners, sometimes my character wouldn't go in diagonal directions, sometimes I got knocked back by an enemy, other times a whole tower defense section would go wrong and I'd have no idea why.
Couple that with being irritated with how shallow and short sighted the characters were... yeah, is it a wonder I grew tired the longer I played?
However, I'm most pleased by how different Aegis Defenders is compared to other games I've played. I love pixel art. At least while listening to characters I can formulate my own opinion, even if I had more in common with the "villain" then the heroes at points.
Hopefully this review was helpful. I fall right between the lines on this one. If this game sounds interesting to you, I think that's enough to say go for it. If you think "oh yeah, that doesn't sound fun" definitely skip it. Thanks for reading!
Unscripted Thoughts Video: