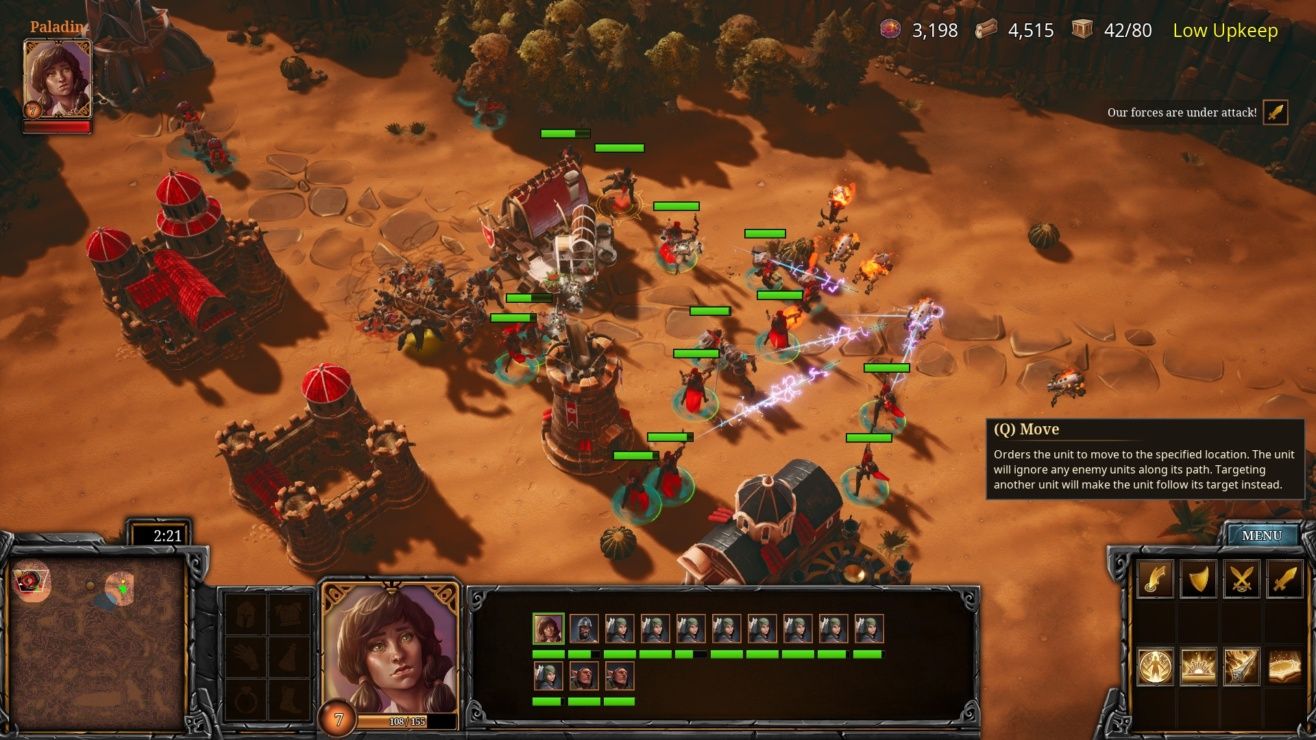 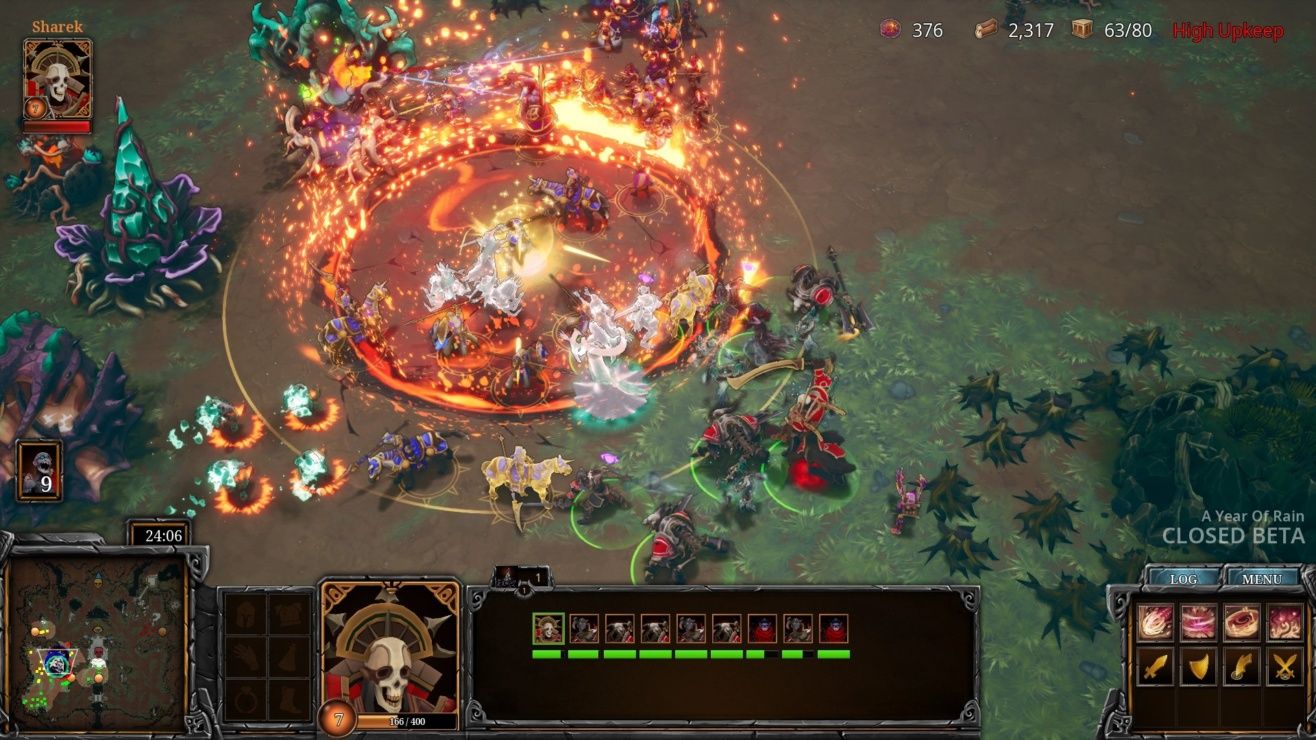 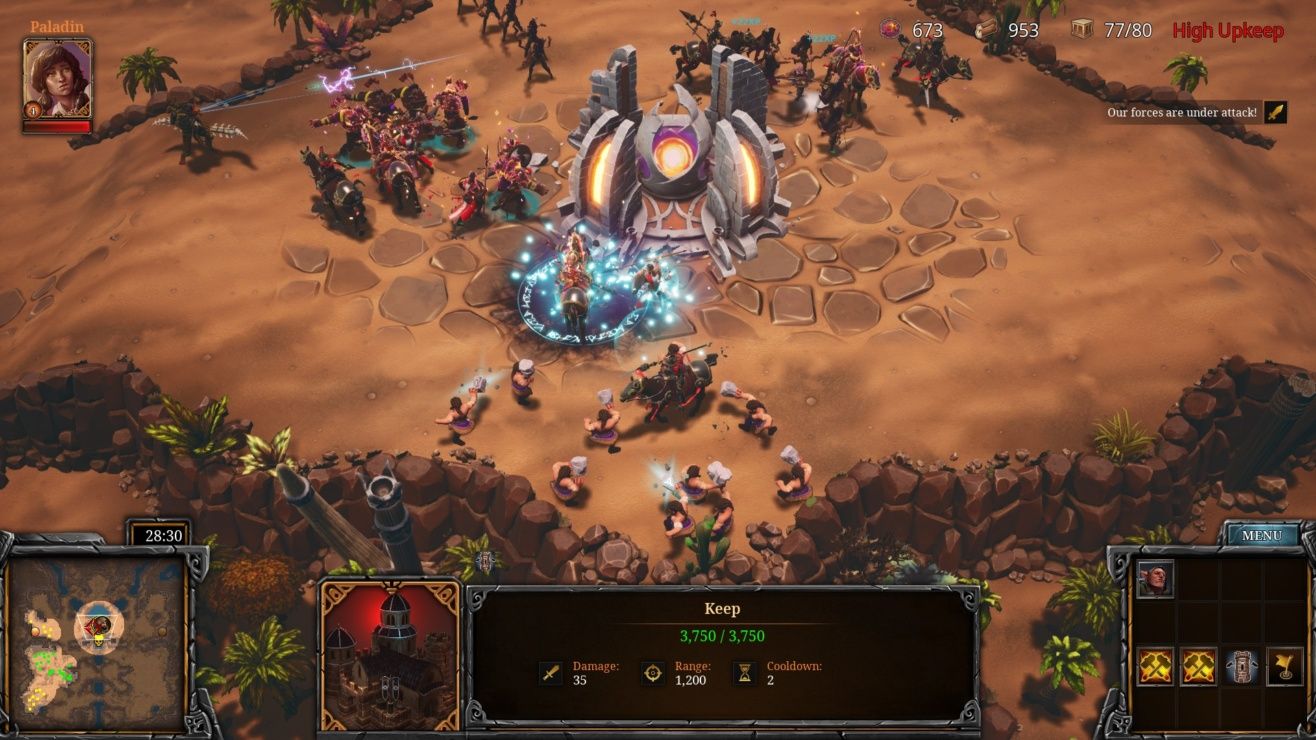 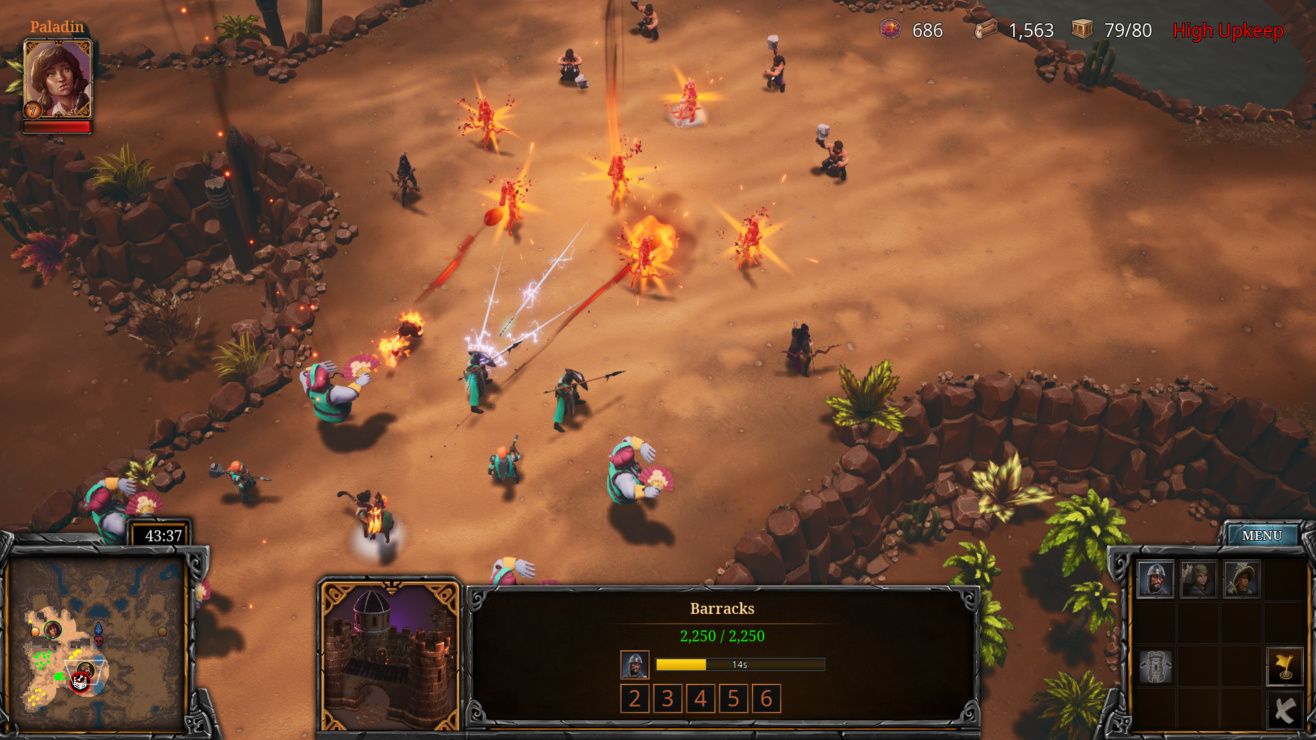 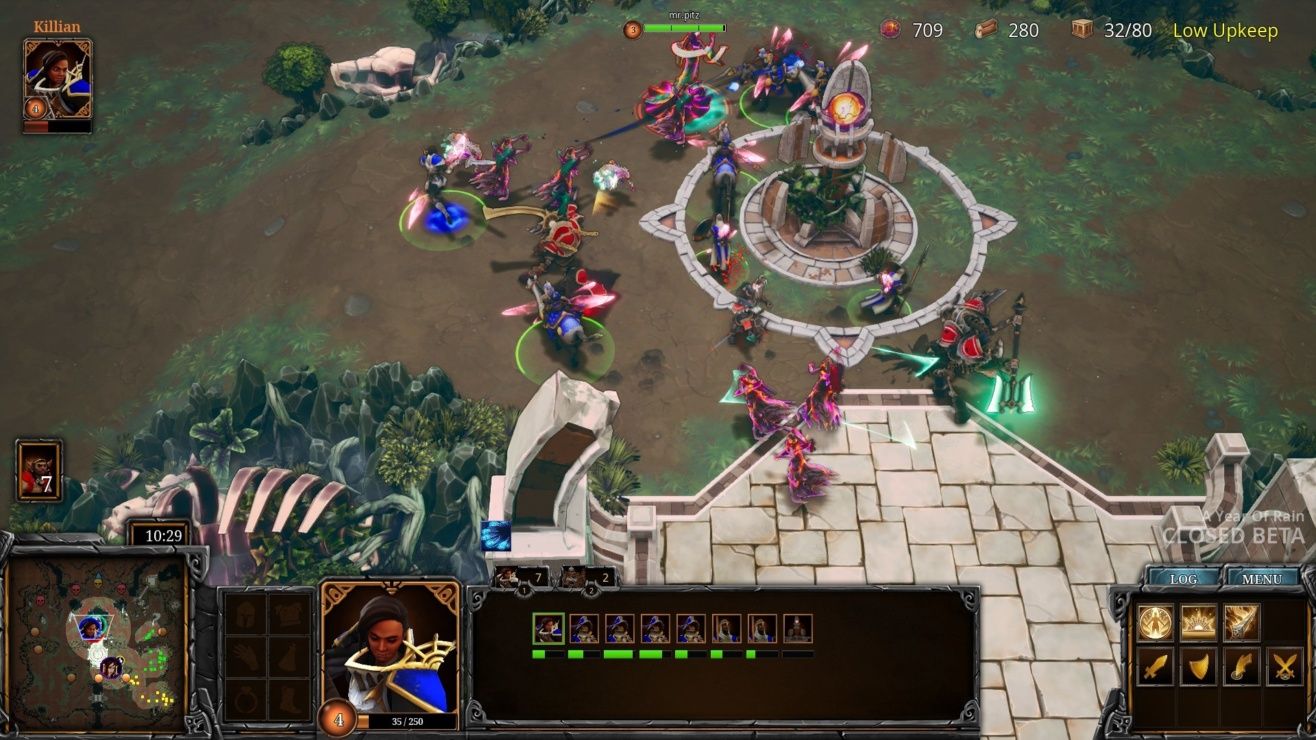 A Year Of Rain

indie medieval multiplayer rpg singleplayer strategy
This world is a harsh and unforgiving place. Its people have to fight for every scrap. Tenacious tribes, nomadic clans or those huddled in the shadow of those with power... they're all caught in a cycle of war and violence, to wrestle from the land what little sustenance it provides. Two old friends want to break that cycle and create paradise amidst the desolation. A tempest of change is brewing on the horizon.
Share Share Share
Promote for 50G

In short: Warcraft 3 and a bit more
Note: I have not touched the campaign and this is just what my experience is so far.
It is an RTS that is focused more on multiplayer and it really wants to put people into that kind of area, which im totally okay with. It features tougher individual units combined with a hero to lead to a different kind of feel than most of the RTS games that are played these days.
The real downsides that will hopefully be worked on is: the pathing is really bad. combined with the units all having a lot of collision (which is how it SHOULD be) and things can get a bit annoying to control well. I also have a bit of a hard time figuring out what the main differences are between each specialization: it tells you that some units will get a unique skill "and a bit more..." but it looks to me that only 1 unit gets the abilities and it would be nice if a bit more information was offered. Also the AI that you play with as an ally in offline games is absolutely the worst I have ever seen in an RTS. I know you should try to play with people, but god it is just really bad.
So far everything is looking pretty great, but it feels like it is a game that will live or die based on its players, so best of luck!
Edit: There is one map in particular, the ice map, that performance just TANKS for some reason. I am far above the specs, but for some reason, even on the lowest graphics that map will start to go to around 18 fps at some points. I have no idea why.
Also in terms of balance: partially due to pathfinding, but archer units just seem way more durable than melee units of any race, and do similar damage. Usually archers are weaker in terms of defense, and in terms of dps to account for their range, but here they seem to do very similar amounts of damage and have similar HP (there is no real defense stat like in warcraft 3, though some units have a bit of mitigation). This means that the tank spec seems fairly useless, as do melee armies.

I would recommend this game if you can grab it for $5 as I did, it was a nice time sink and its pretty fun as is.
A couple things I would note before buying;
Pros:
Love the approach on the art style.
Good Soundtrack
Good Campaign Story, what's there of it.
Likeable "Hero Characters"
Fun Gameplay, enough for me to finish the Campaign on Hard.
Charming in a rough around the edges and cracked through the center kind of way
Cons:
AI has absolutely terrible pathfinding as is, utterly terrible.
There are some maps and levels that pathfinding does not exist at all, some parts of the maps are just not traverse-able, units making obnoxious map wide loop arounds.
Units and Resources get stuck in cliffs, trees, underground and you are unable to move them afterwards, effectively needing to kill them and just re-train.
Game has issues selecting units in a rapid manner and will not always pick up your actions, an extension of this state is also the game runs extremely rough, even on Ultra High-End Systems. During certain levels and skirmishes, when there was no more than 30-40 units on the field and not a lot of effects, I would see FPS drops down to 10-15 from 165 almost out of nowhere. This effect happens no matter the graphics settings.
Quick System Info:
Ryzen 3900X - Liquid Cooled
MSI RTX 2080TI - Liquid Cooled
32GB G.SKILL Ram
Gen 4 Sabrent NVME SSD 2TB

This is a typical rts game with some cool units.
The game also has a skirmish mode, what is a must for this kind of game.
I still need to try the multiplayer mode, but when I did this, I will update this review.
My skirmish gameplay:

Disclaimer: I have received the game for free and been an alpha- and beta-tester for the game. I have also participated in the closed beta "Undead Champions" tournament.
Tl;dr at the bottom.
Let's not beat around the bush. A Year of Rain isn't trying to hide the fact that it's HEAVILY inspired by Warcraft III. From the resources, sending workers to a gold mine and trees to gather gold (called Anorium) and lumber, to the facts that you're controlling an army in the classic RTS-fashion as well as a hero who's hungry for experience, down to the very interface. But here's the thing: It follows its footsteps really really well.
If you've played Warcraft III you'll immediately feel right at home with about 80% of the game. Train workers, build barracks, train units, grab expansions, farm creeps for easy hero levels, tech further down the tech tree to better units.
But of course there's differences. The developers have stated that a focus of theirs is prompting early and plentiful expansion in your playstyle. This has been done through making gold mines mine out quickly, but placing more of them on the maps. Also, hero (and some units') abilities do not require mana, but only work on a cooldown system. This feels like it enables you to have shorter resting periods between battles, if you can manage your units' HP that is.
But the biggest specialty of the game is co-op multiplayer. In fact, that's the core of the game. The PvP matchmating and skirmish modes are balances for 2v2 fights. Even the story/campaign mode is made for 2 human players playing it in co-op together, but if you're alone the AI can be your partner for the story.
Graphically, the game is nothing special. But it doesn't need to be. What it needs to do is perform well on all systems, even low-end, and design-wise immediately give you all the information about what you're seeing at a glance, like recognizing all units in the enemy's army immediately. And these things it does.
The early access release features the full multplayer experience with all 3 factions/races. But the campaign mode only has 1 of the races' story, with the other 2 following in the future. There's also an interesting different multiplayer mode planned that plays asymmetrically, in that one team controls 2 bases regularly but has no heroes, and the other team has only heroes but no bases, presumably with extra systems to make the heroes more powerful than usual. But nothing of this game mode is in the game as of the Nov'19 early access release.
Tl;dr: A very promising Warcraft III clone that's definitely worth a try for RTS fans. Big focus on co-op multiplayer.

I'm a big RTS fan, and this game is great, I don't understand all the hate. It's simple and fun, and at this sale price it's worth a buy!

haven't been able to play much more than tutorial and first mission, but I see a lot of potential for this game:
PROS:
-it's visually amazing. units really stand out as their own class and faction immediately and the art style is between bold/vibrant models and colors with realistic lighting and effects
-the three factions are diverse in appearance, playstyle, and story to where there's bound to be a favorite from any sort of player
-there are in-game animated cut-scenes that, while could use some polish, are very much welcome to add to the story
CONS:
-there are some slight performance issues when there are a lot of units on screen, which I don't ever have issue with in other games
-animations can sometimes look a little stiff or robotic
-pathing has been awkward at times, units have issues forming around single targets, blocking each other off, or even continuing to follow attack orders or follow the hero unit.
I will continue to update and add to this post as I get more game time in and figure where it's strengths and weaknesses are.