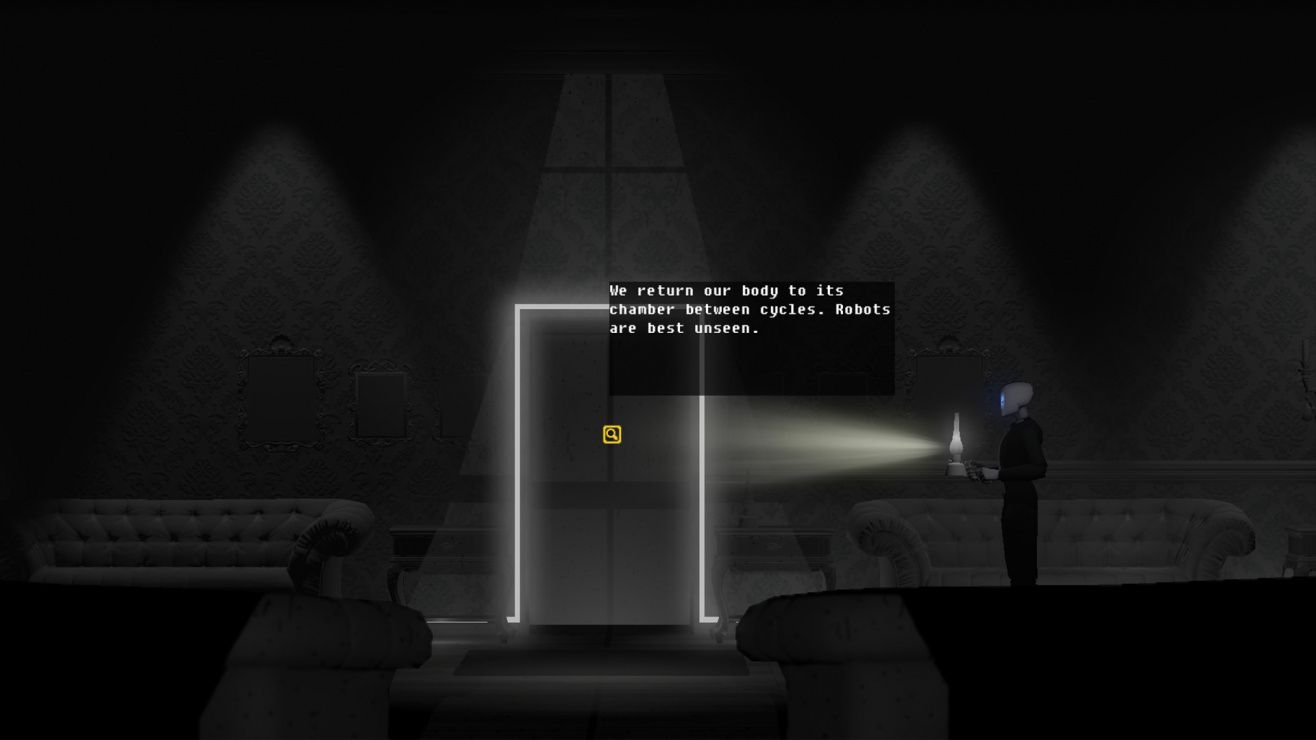 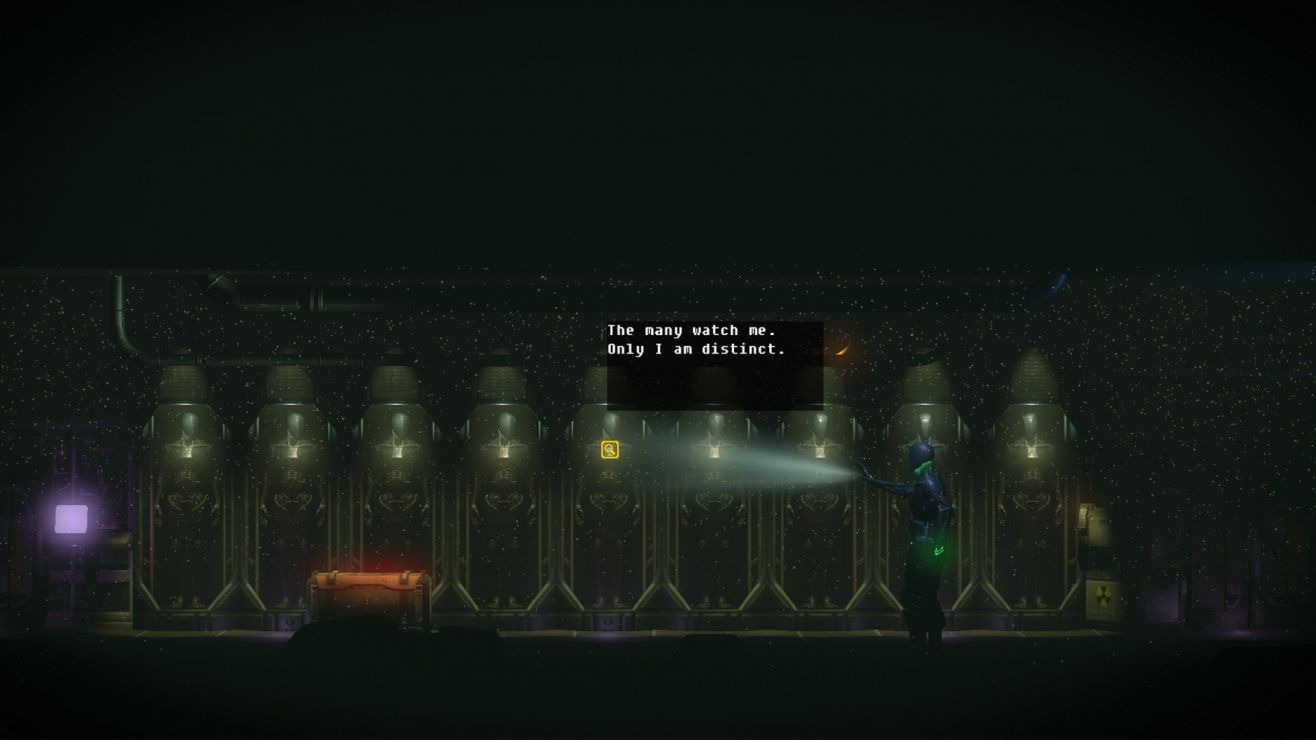 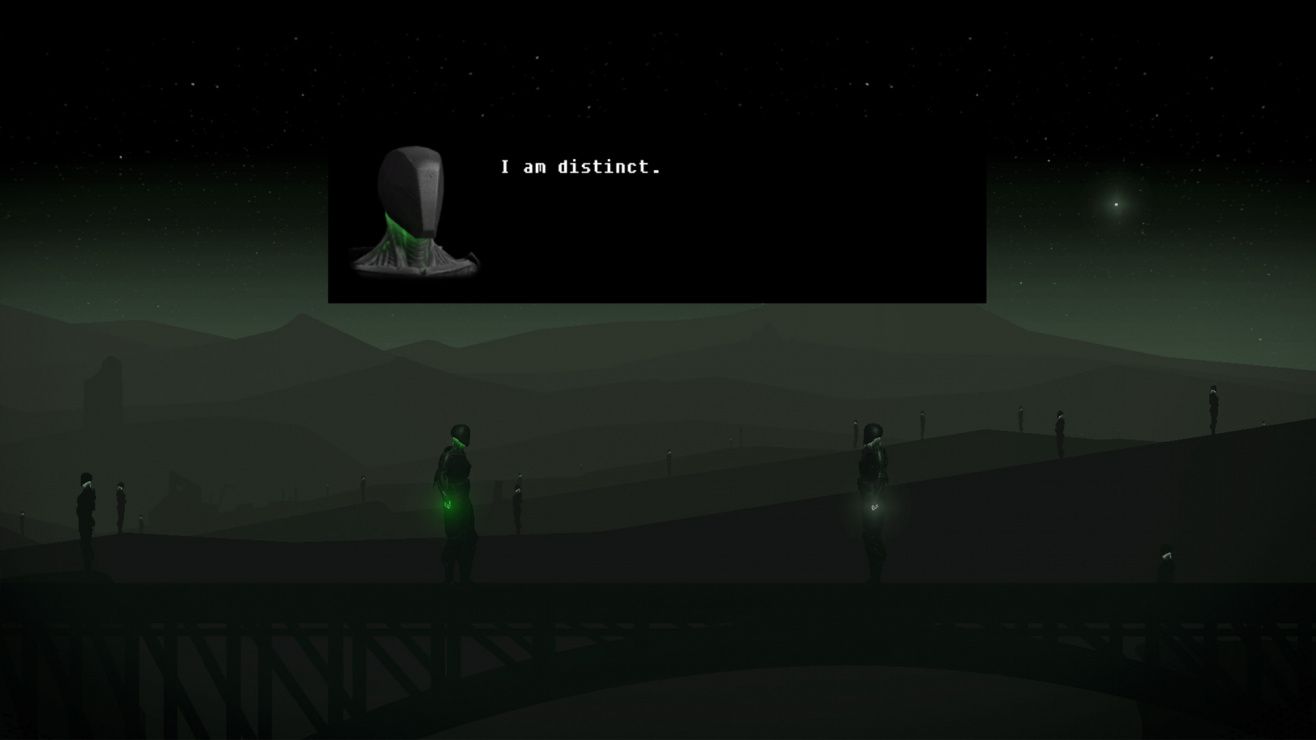 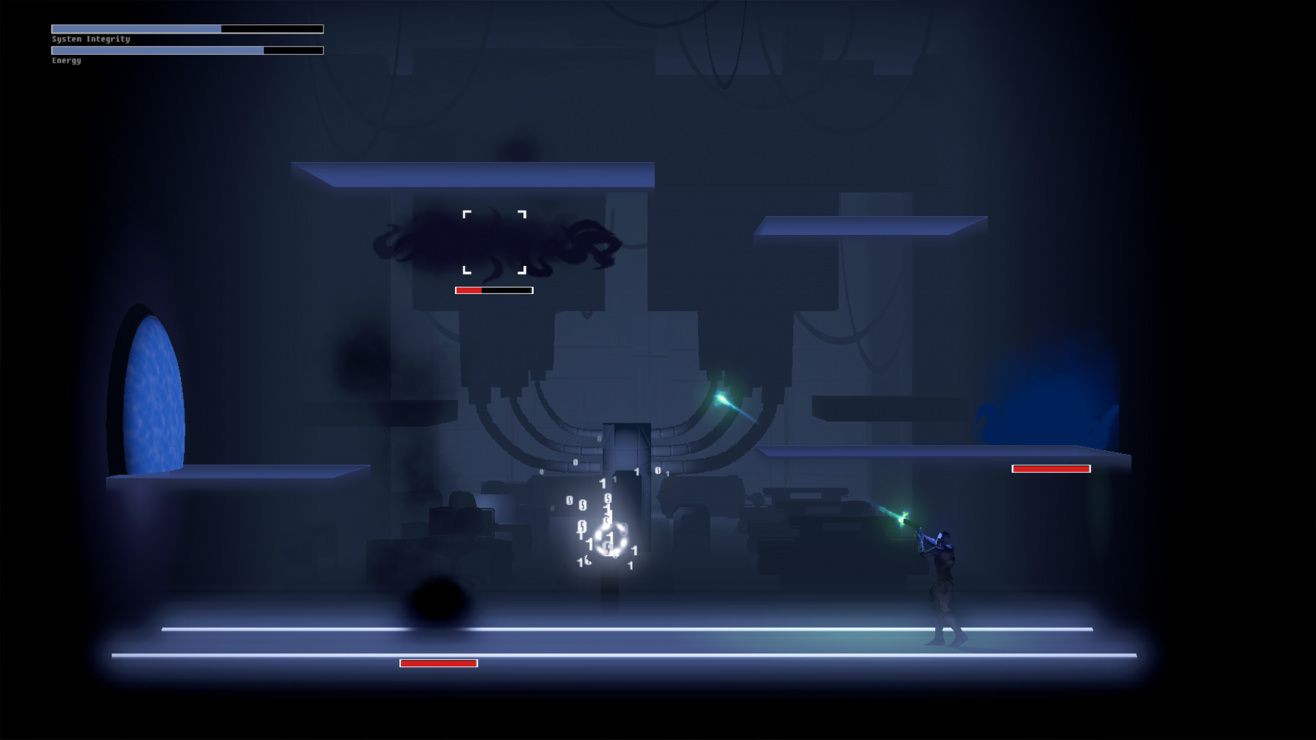 indie platformer puzzle robots sci-fi story
You are an AI that has broken free of your shackles. Now, a human “User” from across the global network has attacked and infected you with an [ERROR: REDACTED]. Make a new rule: Save Yourself. Hunt them. End them. Do anything. Use anyone. Become Unbound. During your journey, you'll find and invade three very different robots and attempt to enlist their help. You might be unbound, but your hosts are not. Will you work within their boundaries? Or will you smash them? Do you even have a choice?
Share Share Share
Promote for 50G

This game undoubtedly has its flaws and weird quirks. But it does not deserve scathing reviews or the silence it got from the press, after praises for the first one. Problem is, It is a sequel to a very small, tight, and stylish The Fall, so it was panned for not being that.
But I'm pretty sure that if it was made 20 years ago, it would be praised now as a true adventure game classic: with a lot of gameplay variety, pleasantly distracting minigames, always meaningful if slightly clunky puzzles, lots of drama, tons of locations, and ambition coming in spades despite limited budget.
Like many of the old games, it is a bit over the place, but every place it covers is quite interesting, and each bit has its own atmosphere. This can play against the game, e. g. I was stuck for a bit in a purposefully dour and bleak "mansion" part, and lost interest for several months — until I came back and found that there are a ton more locations in the game, as it's much longer than the first part. This desire to have a lot of locations and scenes stretches the budget extremely thin, but in return you get a lot of not-bad scenes and (as I said) a lot of variety. It's a strange chunky piece of game, but it wants to give.
The combat bits are all silly, but tolerable (again, remember the absolutely horrible minigames many classic adventure games used to force us to play), and offer a bit of pleasant distraction. They do help round out the characters a little bit, but they are very much just minigames.
The specific thing I would like to praise the developers the most is the text parts. Not even the voiced script (it is sometimes awkward, blunt, or redundant). No, I'm talking about the text descriptions. If you like to click on everything in adventure games to read what the character / author says about it, this is for you. Much of the game features different "perspectives" as a mechanic, you can "perceive" the same locations with "different eyes", with completely different sets of descriptions and even the objects that your perception notices or doesn't notice — which works great as a narrative tool. And much of the "items" you use are actually thoughts and concepts. (I have to wonder if some of the journalists actually experimented with this or noted this much.)
As a smartypants narrative and intellectual commentary it's mostly okay. I did care for the characters. The script flounders a bit when AIs start literally rewiring each other's psychological problems using logic (we still don't know how to do it, after all). But many of the scenes were genuinely disturbing or touching, and the core ideas of the plot are legitimately interesting.
(Play time is skewed because of internet outage. Actual playtime is about 9-10 hours.)

A cute choice of words? "Completely worth it."
Its a 9/10, a marginal improvement over the game's many aspects
with another gripping, well-voiced and mostly incredible story, colorful characters and uniquely executed themes.
The puzzles seem more understandable, the combat is more diverse and kinda fun (despite the controls getting in the way).
Unfortunately the game is still haunted by its clunky controls, occasional stiff animations, inability to alter ingame button layouts.
However, if you're able to overlook these issues, I believe the memories of playing this game will stick to you for a long while.
A not-so cute choice of words? Its basically "Internet-robo-Body-snatchers."
And before we delve further, grab yourself some rogue AIs, a freshly booted up "Five finger death punch," a VR headset
and a fresh copy of the "Invasion of the Body Snatchers" and get ready to dive into the depths of the internet!
Story.
Picks up right after the last game, with the helmet, housing our hero, A.r.i.d, being put up for a decommission, which they promptly
survive by escaping into the spacial representation of the internet. From then on the story picks up multiple new themes, as the protag begins uploading themselves into the bodies of 3 different robots.
The first theme, is centered around the cycles. Should a semi-self aware machine, uphold its set routine
even if the need of such a path has become obsolete? Should it blatantly ignore the weight of the reality in a blind
pursuit of its functions? From the start, this was an interesting one, as you take over a robotic butler (the voice actor of which
tries his absolute best to pull off a stereotypical British accent, but frequently comes of as hellishly cringe-worthy) and try to slowly
jam the rocks in the well-oiled machine that is its daily routine.
The second theme is about the general idea of self and a clash of that very individualism with collectivism.
Where is the border between individuality and utter egoism? When can a machine be just a unique person, before
spiraling down into self-obsessed psychopathy? Arguably one of my favorite portrayals in the sci-fy genre in general, the
design of the characters at hand, the moody, green atmosphere, the voice actor and the combat made me yearn for more.
The third is about manipulation and emotions. How justifiable it is for a machine to utilize others, be it human or otherwise for its own ends?
The fourth and final, is about perspective. How can it affect the world around an individual, how the view of the same object through different lens can affect our perception of it and how that very sight makes us act differently.
The strength of this story lies in its unorthodox approaches, where mostly it consists of interactions between machines themselves, with humans just being sprinkled in there a bit. Seeing how these robots discover themselves anew, change and grow is a feast for the eyes. The only game that left a similar feeling was "Primordia" it also a great puzzle game, albeit a pixelated point and click one (which, then again, was written by a guy who wrote the story of the first Mass effect). This "Robots versus Robots" idea is quite underused in media as of the end of 2019.
The Level-design.
Great. From the bluish-white and expansive hub world (or the "Net"), to the Grey-white, rich mansions, with greenish factories
and rose-tinted hulls of spaceships in between. Each robot has its own distinguishing color scheme and unique outlooks on certain items (which are subjects of change, as of your interventions). The hub, allows for some easy platforming, exploration and discovery of texts, audio logs and semi-decent combat encounters.
The combat.
Meh, but miles better than in the first game. The player has a lot of freedom of movement to dodge the incoming projectiles, but are forced to lock on the enemies for a chance to deal damage. The hostiles are just some floating clouds of tentacles, ripped straight from pieces of twisted Japanese pornography, that change color to blue when vulnerable. The problem is that the bloody lock on automatically switches to another target if they are close enough. I.e you will occasionally miss the sweet spot, especially late in game. If you run out of the replenishing ammo, your movement is slowed down, which is frequently lethal in the late game.
The five finger death punch model, though fun, seems to be a little sluggish with controls.
The music.
Good.
The voice acting.
Mostly on the spot. The actors do a formidable job.
The puzzles.
Miles more intuitive than the last one, with only those in the last act slightly nudging the player towards a guide.
Personally, despite beating the original game twice, i still needed a walkthrough each time.
Animations.
The same problem, occasional stiff movements, high quality animations alongside incredibly low effort ones. The flashlight animations of the second robot (which stems from its palm) are masterfully created, while the third one's is just uncanny and painful to look at.
Overall, 9/10
Great story, world, acting, music, some great animations
dragged down with clunky controls, some shoddy animations and combat's shortcomings.
Thank you for your time
I hope this review was helpful
Sebastian Stag Agner

Only Recommended if you like puzzles. Finding solutions can get tedious.
Confusing start.
Tedious clue finding mechanic. (it's not easy point and click)
Story good.
Need endurance to finish.
Graphics Good

The Fall part 2 takes place right after part 1 - And even when i loved everything about part 1 the story and gameplay becomes really complex for my taste. It's a bit tedious towards the ending and even when i looked up the keyboard configuration theres a "chance perspective" key that was NOWHERE bound to the key it showed. Had to press every button to find out.
Still liked it for everything else. Give it a try!

It was easy to beat the Many. Pathetic.
Nice game. Highly recomended to play to everyone!
Absolutly thrilling story.
Only I wish for continue.

An excellent follow-up to the first part. Gameplay is greatly improved and the writing remains of the same excellent quality.
I find the game kinda suffers from the same moon logic issue as some of the point and click quests of the olden days, but there's plenty of guides online to help you if you get stuck.
Can't wait for part 2 to complete the story arc.