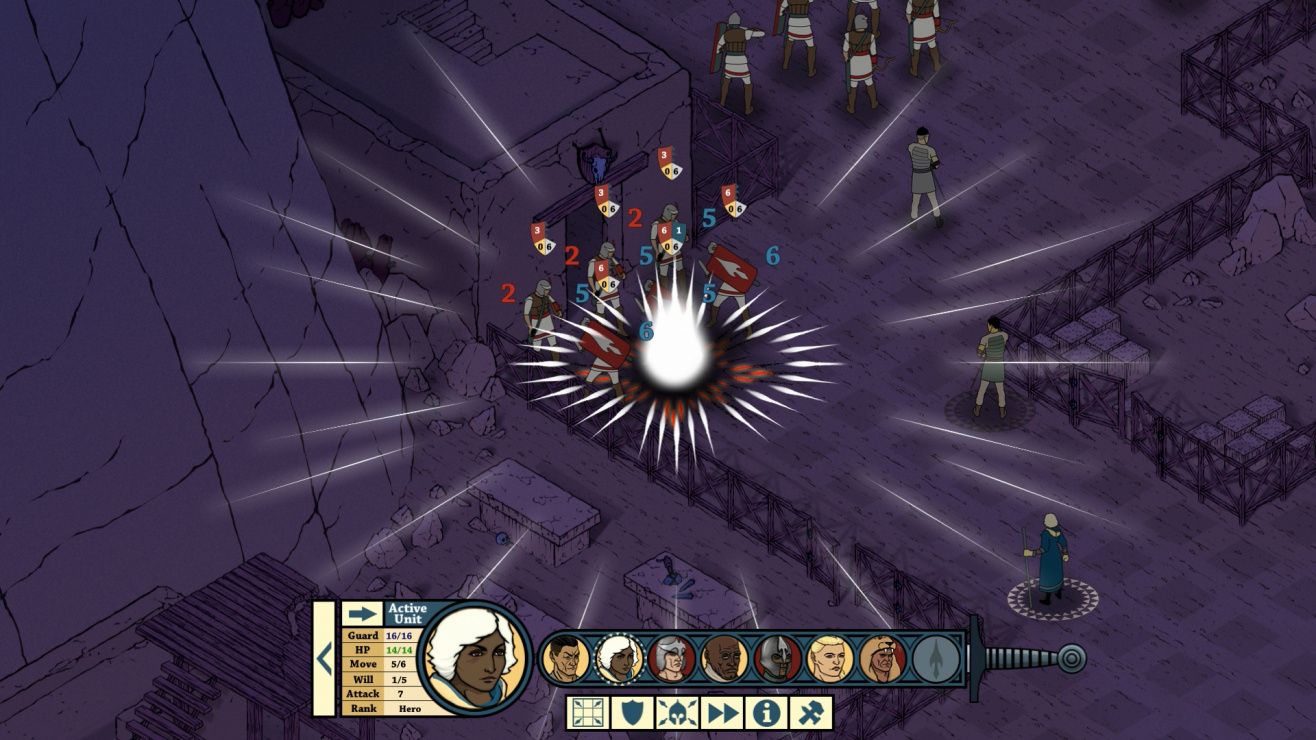 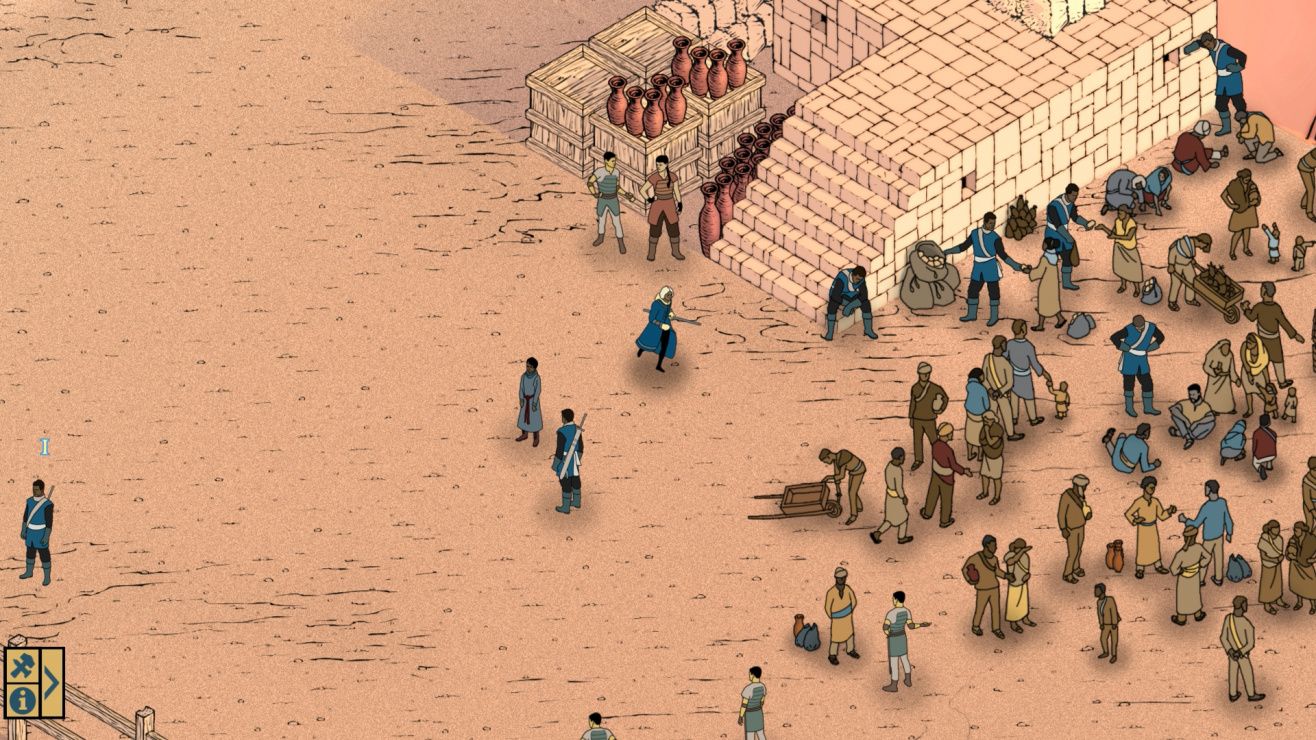 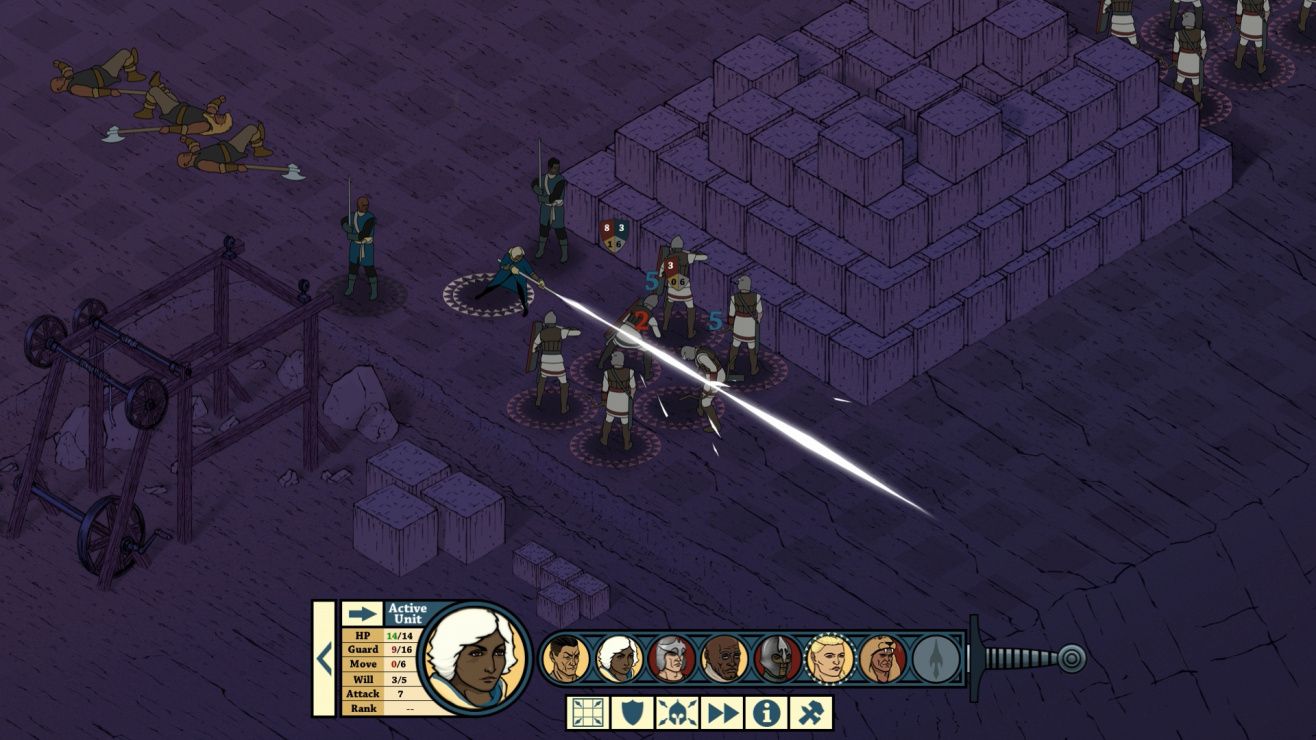 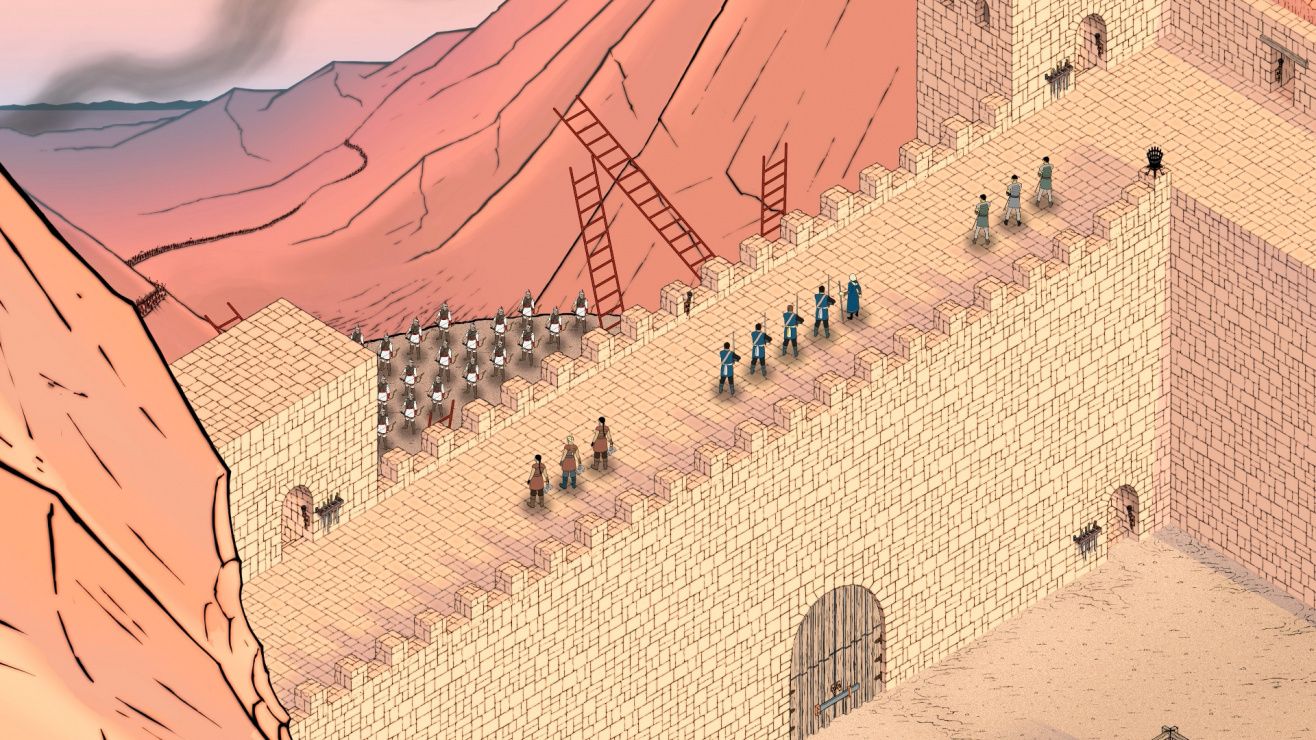 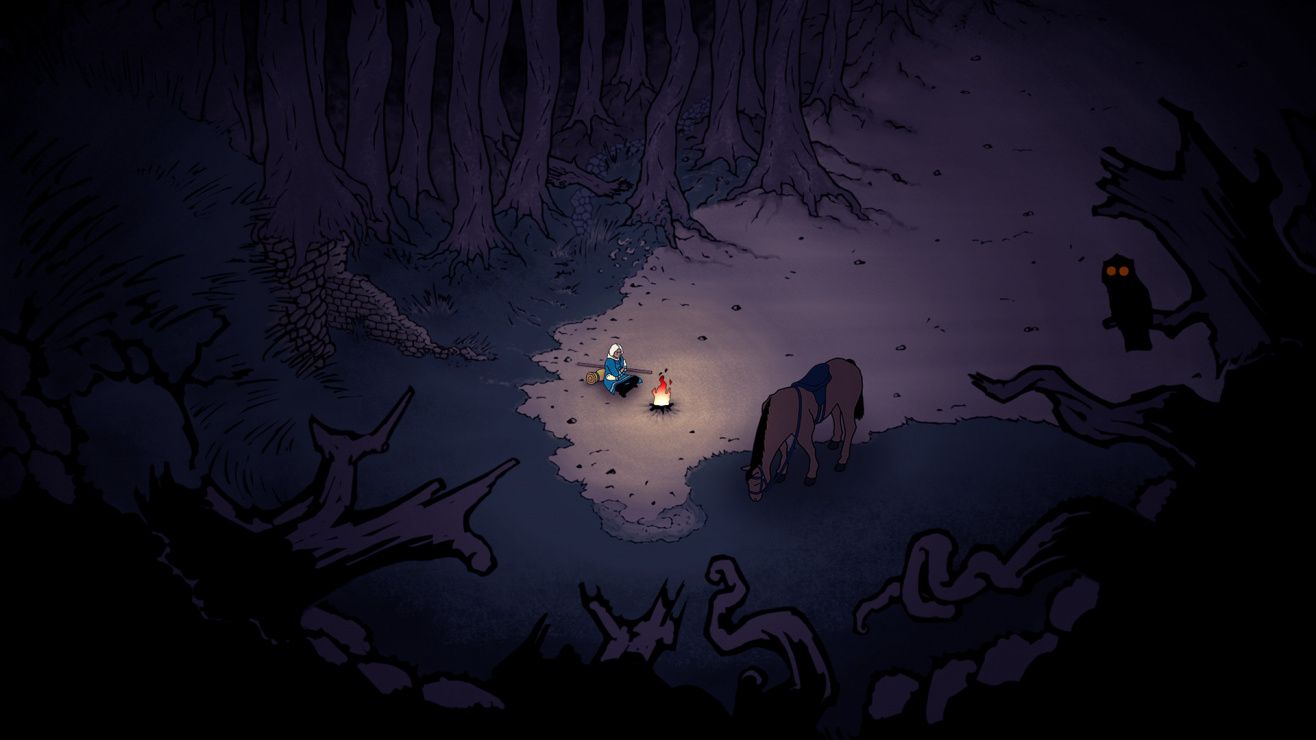 Tahira: Echoes of the Astral

adventure empire epic female indie kingdom princess rpg story strategy
A thousand years after the fall of a spacefaring empire, a young princess named Tahira travels the far reaches of her barren kingdom, alone but for her trusty horse, Iba. When word reaches her of an army wielding the devastating technologies of the past, she finds herself thrust into the most challenging night of her life as she fights to become the leader her people desperately need. Experience the epic coming of age story of a young woman, told in near-real-time across a 12-hour period in this tactical turn-based adventure.
Share Share Share
Promote for 50G

A very impressive little game that ticks pretty much all the boxes for me. Great tactical battles, compelling story, intelligent dialog, nice art, and a UI that doesn't get in the way. I heartily recommend it to anyone who enjoys turn based tactics.
If you know Banner Saga's combat system, you'll be right at home. This is a good thing, very good even - it's an excellent system which deserves to be reinterpreted and iterated upon. There are interesting differences, but most importantly the battles you have to fight are open-ended, large scale, and challenging.
The is no strategical layer to speak of. I prefer that to Banner Saga's trainwreck of one, to be honest.
There are very few choices and branches in the story, which would have been welcome, but it's not a terrible omission either. The setting for the story is original, believable and interesting; the characters, while not developed that much, are likable. The story line itself is enjoyable and engaging.
I typically don't place too much value on dialog, but I've been positively surprised here. It's interesting and smartly written, while staying short enough to not get in the way of the story or the gameplay.
The art is also quite similar in style to Banner Saga's, and that's also a very good thing. Clearly the budget there is not quite the same, but that other game (being one of the most strikingly beautiful games in recent memory) is not a fair comparison. The first impression might be a bit less than overwhelming, but it grew on me quite well.
The UI is maybe the thing I have the least good things to say about, although it's not really bad in any obvious ways. It looks a bit meh, and sometimes demands a few more awkward clicks than seems necessary, but nothing major.
On the whole, the largest negative I found about this game is how short it is, as it left me wanting for more. Hardly much of a negative though, is it ?

Tahira was a fun, but brief, adventure that in the end, felt like the first hour of a really good movie.
It ended when the character and story development was JUST starting to get rolling, JUST starting to hook you in--and then abruptly, it's over---clearly paving the way to a sequel or two.
Which, incidentally I'll be buying--because Tahira seems to have nailed a lot of the fundamental aspects of gaming, correctly.
Most of your time, and I mean 90%, will be fighting. And the fights are large-scale, multi-staged, arenas which make for some pretty triumphant moments if you use the battle mechanics correctly to your advantage.
The battles are fairly long, with scripted events, and virtually every battle is a fight against overwhelming odds, which at first glance look impossible--but it's pretty gratifying to 'hulk smash' their superior forces.
I've been a strategy and turn/based strategy fan since the term came into existence, and in Tahira, was content with the level of balance and difficulty that I ran into. What it lacked in dyanmics in terms of NPC skills, it made up for largely in the size and range of options of the battle fields. Essentially, while there weren't a lot of individual skills, there was a lot you could do with what little you had--so in the end, it was still fun and challenging.
The graphics/animation are hand-crafted and look wonderful, similarly, the sound effects and music quality are well chosen.
My largest gripe with the game is that it ended too soon--I don't want a half-scoop of ice cream! :)
In terms of improvement, I think the characters could be better developed, and more dialogue could have been added to the game to make it seem longer. Dialogue between characters did not include descriptive elements (only direct, spoken lines), which I think is a missed opportunity for immersion into a well crafted, mystical environment. Humans relate to emotions--and if players can become privy to the internal dialogues and states of protagonist characters, they can relate to--and connect with them better; this is the difference between a comic-book and a novel. And as Tahira is a story driven game, it would be greatly improved by adding narrative and descriptive elements to add to it's already solid combat systems.
Overall, I'd give it an 8/10, for 3 guys, it's quite a job well done. I hope they use this game as a template to launch future games with expanded character abilities, subtantially more dialogue and descriptive elements, as well as special attention to individual character (personality) development.
I had fun! looking forward to the next one!

In a nutshell:
+Very friendly and responsive developer
+immersive story
+beautiful art
+engaging (albeit repetitive at times) turn-based combat system
And yes, the game draws clear inspiration from The Banner Saga, but I can't see how that would be a bad thing considering how good a game TBS is.
Overall I'd recommend a purchase if you enjoy turn-based strategy, story-driven gameplay and/or are a fan of beautifully executed game art.

Tahira: Echoes of the Astral Empire is a good, little game. While I enjoyed it, I've seen some reviews here absolutely gushing with praise and I can't quite understand them. It's a good game. Is it incredible? No, not really. The story is good though nothing particularly amazing and it desperately needs a sequel to tie up some loose ends and to resolve the cliffhanger ending.
Most of the reviews compare Tahira to The Banner Saga and for good reason, since the combat is nearly identical with only a handful of small differences. Graphically, it is almost disintguishable from the Banner Saga during combat and if you told me they were part of the same series, just covering different locations or something along those lines I'd believe you. Where the Banner Saga let you choose between targeting the opponent's health or guard, Tahira forces you to work through the guard stat before you can whittle down the health and dispatch the enemy. You only have three different classes to work with (four if you count Tahira, herself, being unique to the other characters you use) with a serious lack of ranged options. In terms of story and choices, Tahira comes up a bit short. There are only a couple of choices you can make (as of the writing of this review I can only clearly remember one though I'm 95% certain that there was another one) and they don't really make any difference. Where the Banner Saga prompted you with choices that had real ramifications for the story and the combat, Tahira is more like reading a novella with combat segments after each chapter.
While this may all sound a bit negative, Tahira really is a good, enjoyable game. However, I would only suggest that you temper your expectations a bit. It is rather short and the ending comes up rather abruptly with a fairly large cliffhanger. The combat is good though nothing groundbreaking and some of the later battles can get a bit dull as Tahira's response to up the difficulty is to just throw more and more enemies at you as oppose to having different objectives to accomplish. The music and artwork are both very good and the Middle Eastern inspired setting is a fun and refreshing viewpoint that we don't see in enough games and could certainly do with some more of.
If you enjoyed the Banner Saga, you'll enjoy Tahira. They are, like I said, shockingly similar. It is not, however, perfect and it's similarity to the Banner Saga works against it. I feel bad constantly lining the two games up and pointing out this or that but they really are that similar. However, in the end, I have to give Tahira: Echoes of the Astral Empire the thumbs up. Pick it up, especially if it's on sale, you'll probably enjoy it.

One of the greatest turn based strategy games I have ever played! Beautiful art, haunting music, intriguing story and challenging combat. Tahira is such a unique gem I didn't even mind the cliffhanger ending, I just hope Whale Hammer Games can find more funding / create a Kickstarter so I can help make part 2 a reality.