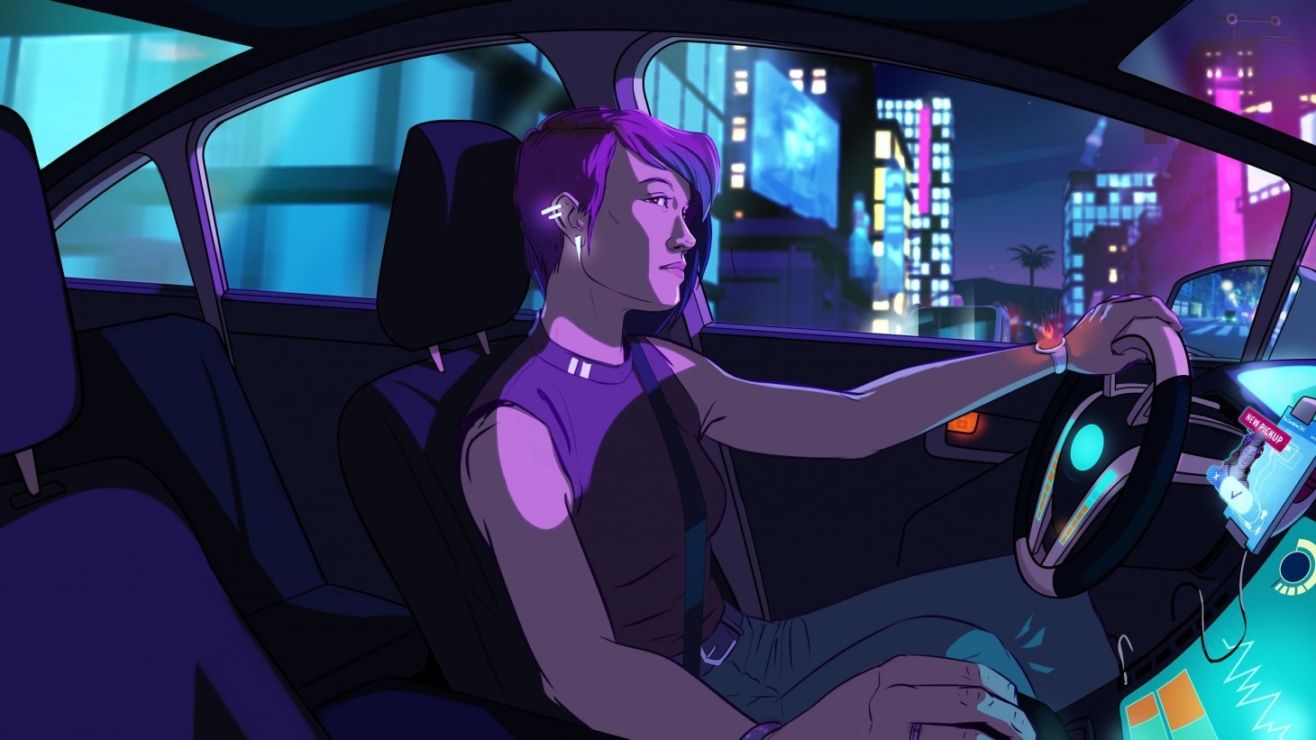 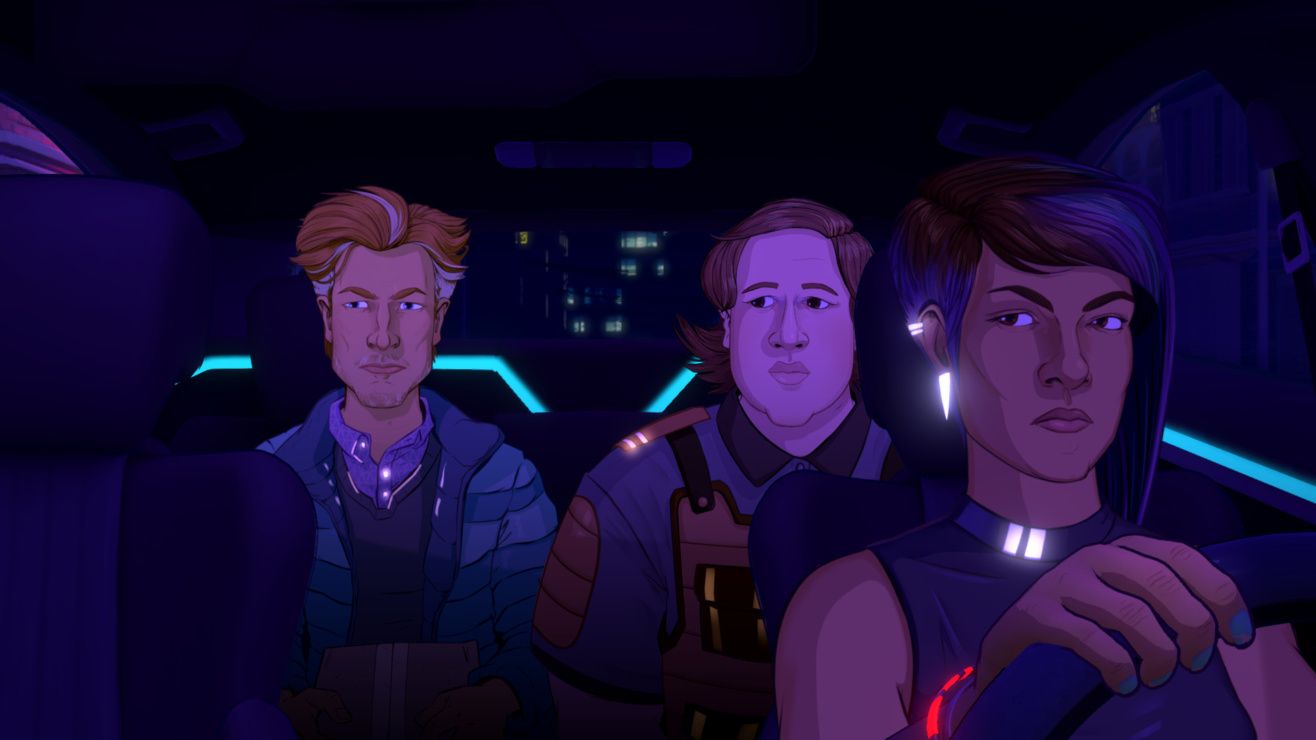 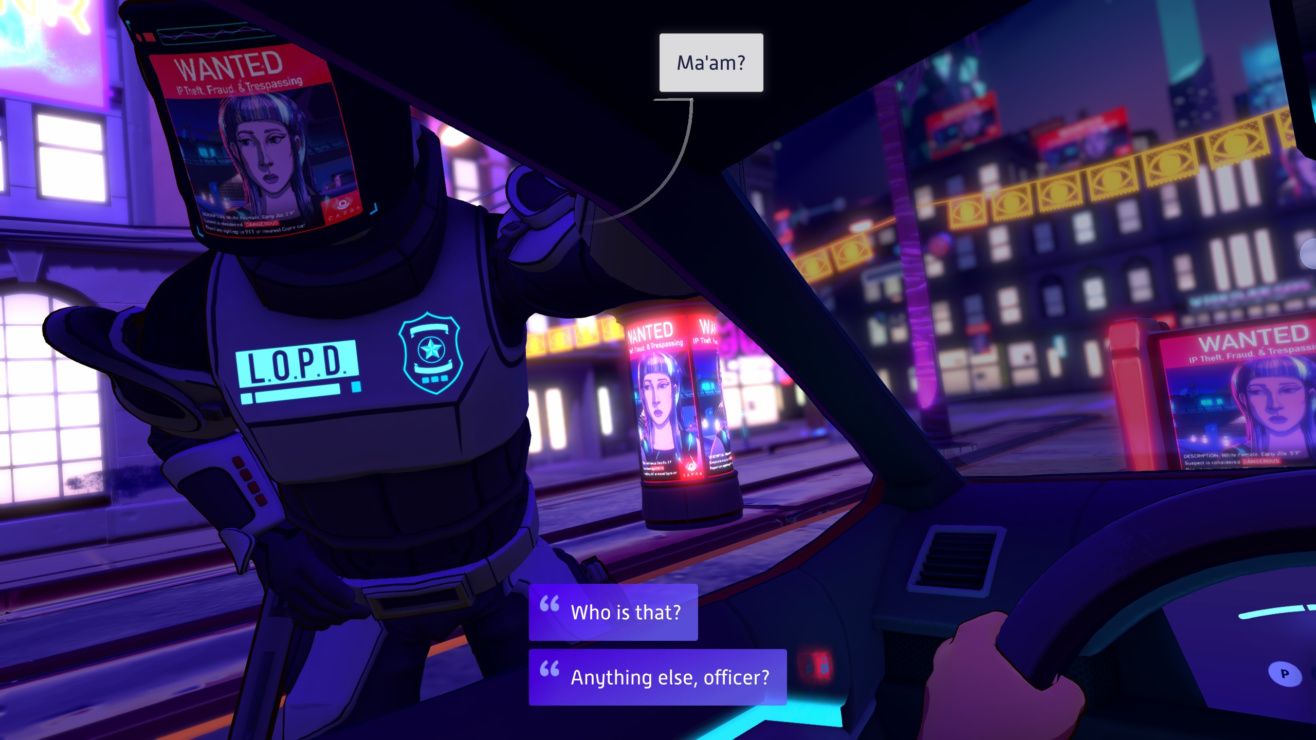 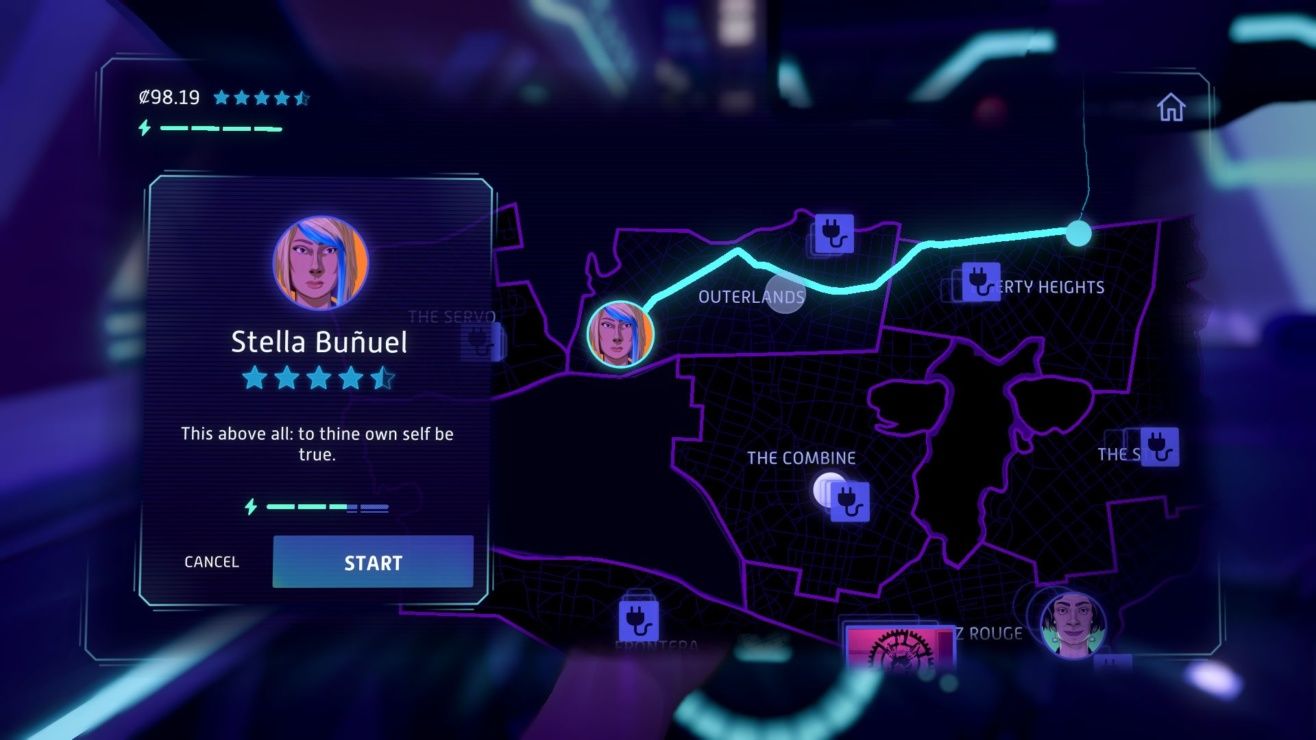 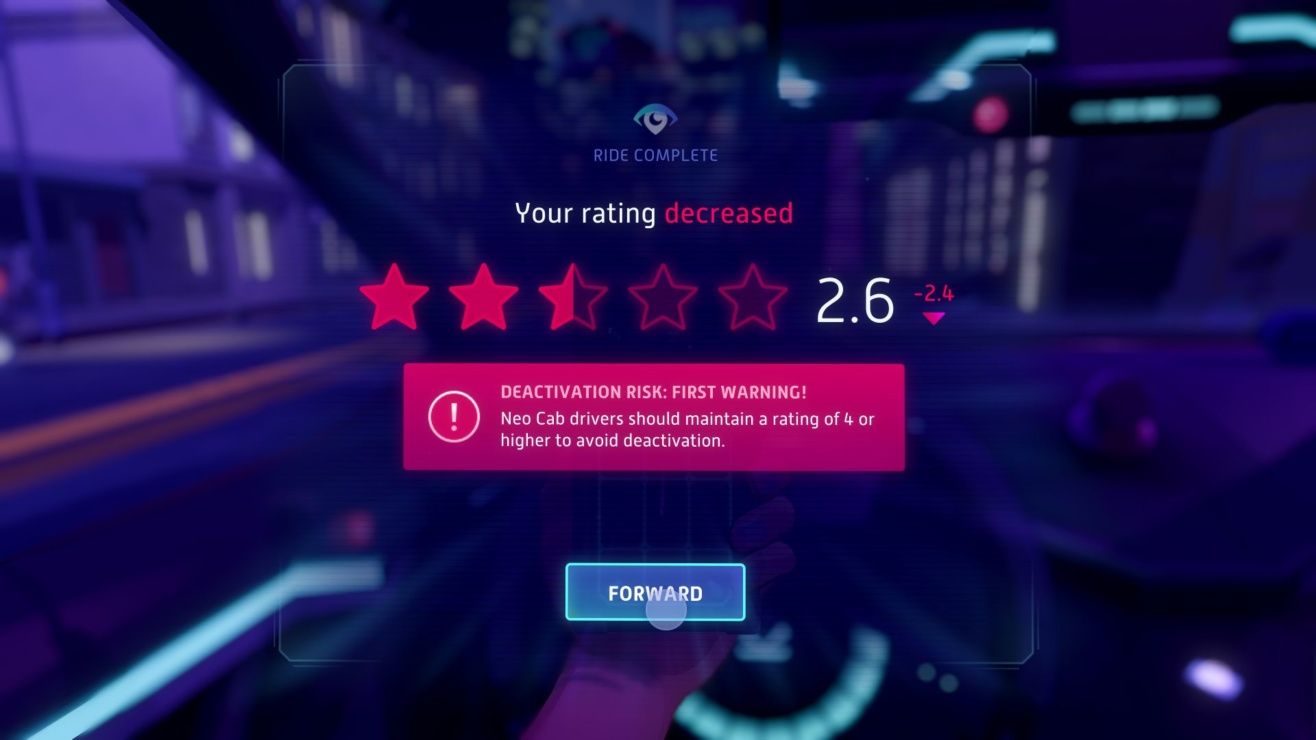 adventure comics indie novel role-playing rpg single-player story
Hold on to humanity in a world overcome by automation. Play as Lina, the last human driver-for-hire on the streets of Los Ojos. Your friend and only lifeline has gone missing; with no money and nowhere to stay, your only leads are the passengers that get in your car. From the Neo Cab app, you’ll choose your passengers and navigate the city grid. Each character you meet has their own story to tell and secrets to share, if you can figure out what they want to hear. But watch what you say—you’ll need to maintain your star rating to stay on the road. Plus, every choice you make affects your mood, and your mood will affect what choices are available to you. Can you make enough money to crash in fancy hotels, or will you sleep in your car? Will you be able to get passengers to open up to you, without selling out your own emotional health? As you discover the truth about your friend’s disappearance, the connections you make along the way can make or break your adventure in Los Ojos. Meet people. Learn their stories. Stay human!
Share Share Share
Promote for 50G

Its a good game. Maybe a litte to short but the characters are very interesting and all have thier own story you can discover. Sometimes I really felt like a Cab driver in the near future.
Art style is very nice. Aswell as the soundtrack.
But sometimes it wont let you respond the way you want to. It forces you to respond in a certian wa y and I really didnt like that. It kinda destroyed the illusion for me ... but it happend only like 2-3 times so its not that bad.
Overall I'd wish that there were more characters and maybe more to discover. Also a longer and more interesting story would have been nice.
However the content that is available right now, is really good and will keep you entertained for a few hours.

A great game which could have used a little more refinement.
(First and foremost, I finished the game in about 4 hours, but since I did so offline, Steam has only four minutes "on record" for me playing this game.)
But for the review: The story is set in a dystopian cyberpunk near-future, where you play as a cab driver who comes to a new town to live with her best friend, with a core element being branching timelines. The worldbuilding is excellent, and so is the art style.
Gameplay-wise the game is similar to the recently released "Subsurface Circular": you're picking options from a dialogue tree while you are interacting in static screens, with one additional gimmick - you have to manage your emotional state via a bracelet-display thing your player character is wearing. There are four emotional states which are colour-coded, and some dialogue options are shown with a marker in the same colour to indicate the type of response or the direction which the conversation might take. So you try to extract information from your passengers by picking options in the context of the game world.
And this system is exactly where my central point of criticism lies: You are always shown several dialogue options, but - depending on your actions earlier in the game - you often cannot pick one or more of them; when you click on these options, the game just tells you that your player character rejects to speak or act in the respective way. This makes you feel forced to click on that one "right" option that the game wants, instead of the one that you want. And especially in the final interaction, this made some of the emotional reactions of the player character seem pretty inexplicable.
In this regard, I would have preferred if these un-pickable options either did not show up at all or the dialogue/options tree had a lot more branches so you could always pick every one of them and have the story unfold around your choice. (It would seem likely that the small team of developers did not have the time and/or budget for this.)
You obviously just have to guess through multiple playthroughs which options are available to you under which circumstances, since the game isn't always very clear about the feelings of the other characters.
But still, the narrative and the cyberpunk world are fascinating, the characters are well-written and even if the story itself is rather predictable at times, the storytelling is still excellent. If you are like me and consider "Life is Strange" or "Gone Home" masterpieces in storytelling and prefer interesting worldbuilding over action-based gameplay, this should be exactly your thing. I surely hope to see more from this developer in the future!

Nice short game with replay value. Similar to a visual novel with some survival elements. Most of the game is talking to people you've just met. You have choices to make for dialogue and actions which can alter future conversations. The dialogue is written well and isn't boring. You won't be able to experience the whole game in one playthrough. The main character Lina has some biases and steers the conversation on her own at times which I disliked. I would have preferred putting myself in Lina's shoes and forming my own opinions rather than choosing one of hers. The art is nice looking but the city can be bland sometimes. There is no voice acting which is a negative in my opinion. Lina was as much of a character as everyone else (instead of a faceless protagonist) and voice acting would have helped the game. Good game otherwise.

Short, but beautiful cyberpunk art style and kind of a perfect soundtrack. The game also has a kind of therapeutically cathartic value to it as you gain proficiency in managing your own and others' "emotions." The story is written with amazingly brilliant emotional intelligence by the developers, making the dialogue intelligent and fun for such a short and limited gameplay.

NeoCab is a futuristic, well written Uber simulator. Your choices, thoughts and feelings matters highly, like an accurate human simulator.
I finished it 4 times and every time was a completely different playthrough. So I assure that its replayability potential is 10/10.
My only disappointment was the absence of voice acting.
Thanks for this original, beautiful, unforgettable masterpiece!

The chill music, the neon, the art style - all on point. The absolute beauty of the game though: that narrative design and writing. I know these characters, inside and out. I just met them. It was honest, and decent, and truthful.
Somehow playing this felt like a balm, like swinging on a hammock in between two palm trees, just over the water.
Well done, devs. Well done.