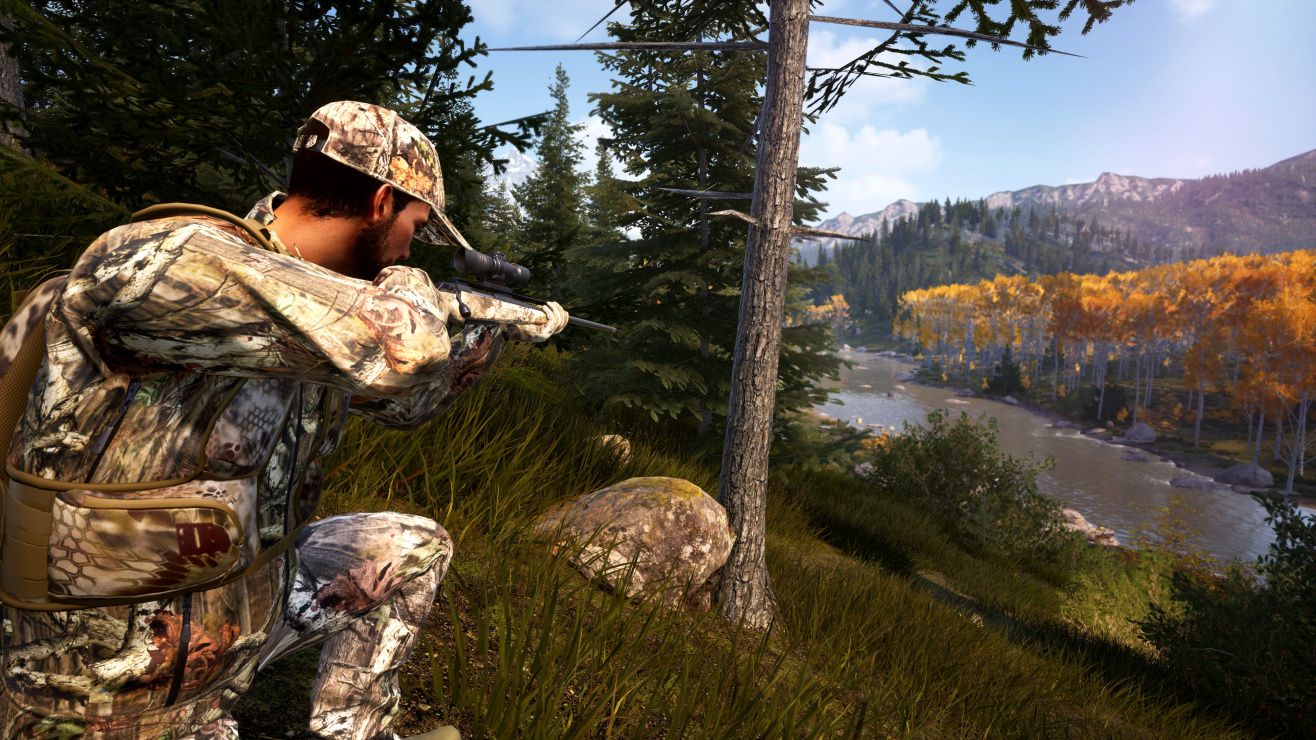 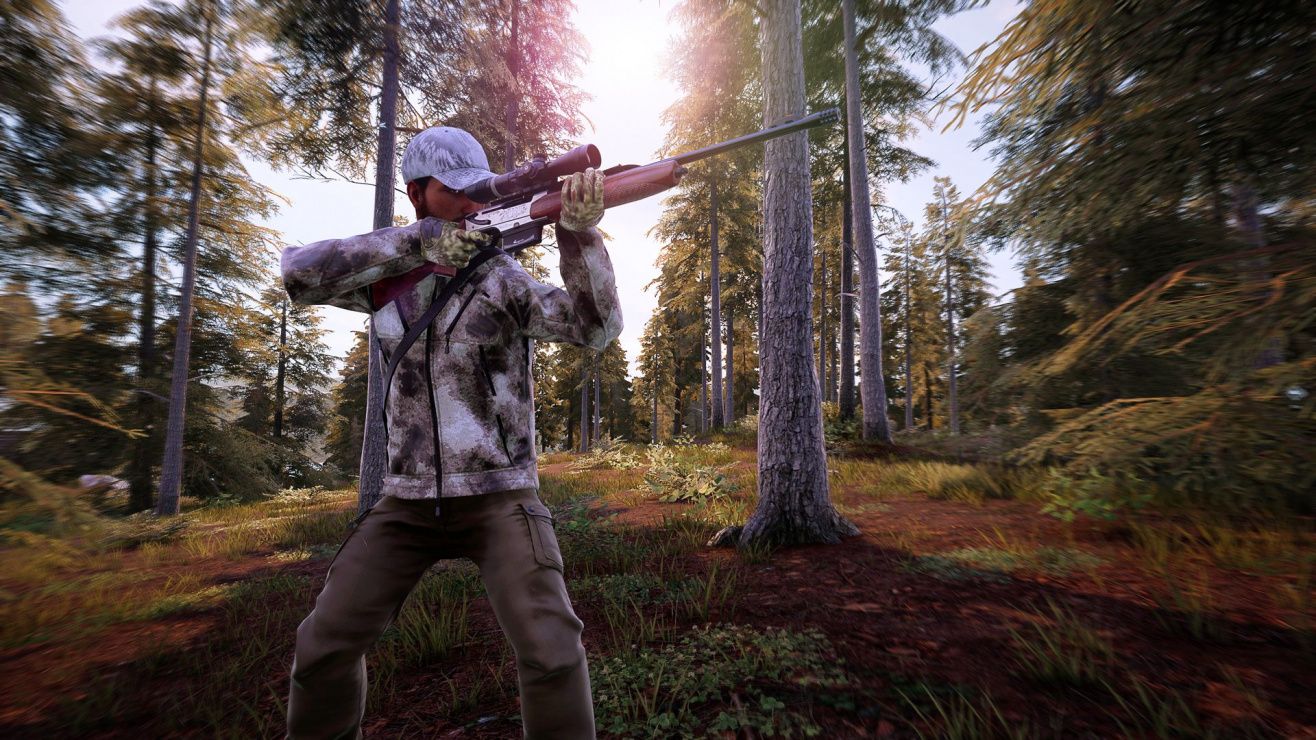 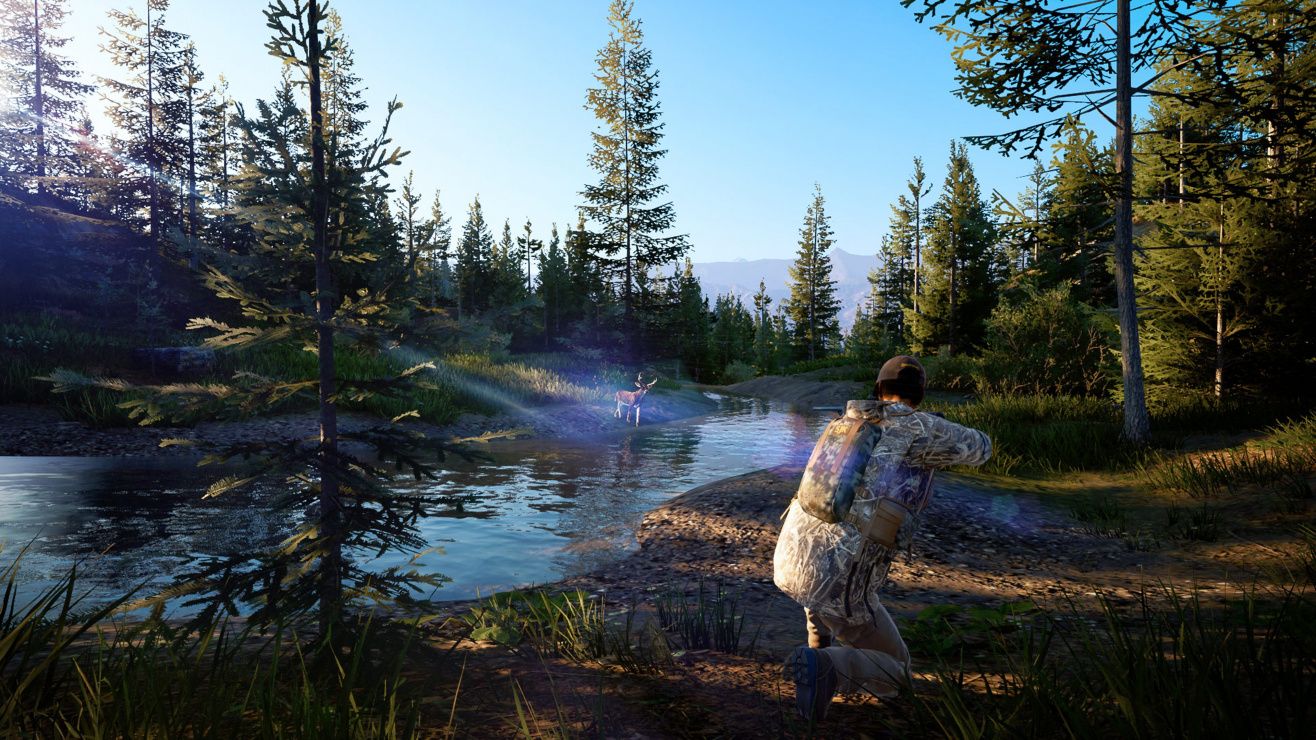 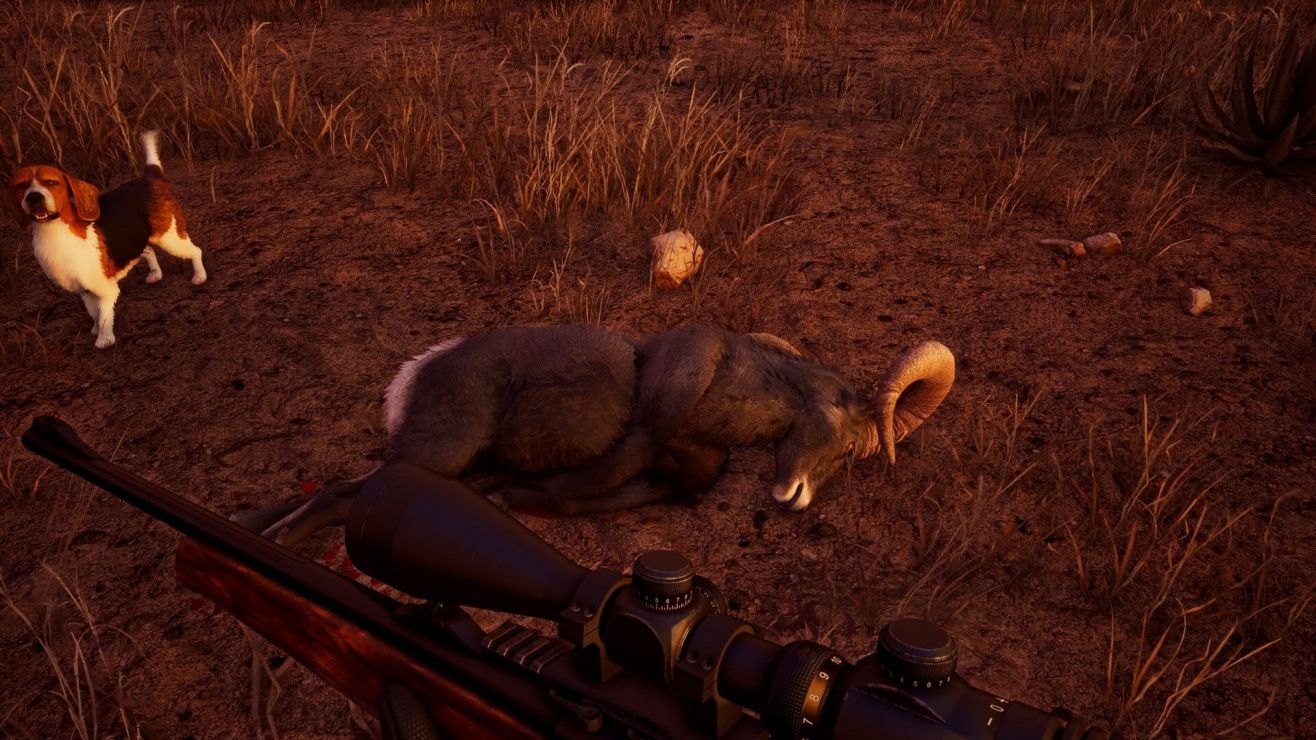 PC Steam Console Playstation action Xbox simulation relaxing nature hunting dog
It's open season! In stunning natural environments, choose your gear from the best official weapons and accessories and set off with your dog in search of a variety of animal species in this hunting simulation. Hunting in an open world Explore the plains of Colorado, the Texan desert and the forests of Eastern Europe in vast open worlds of over 6 square miles. A wide variety of animals Track down 33 animal species in their natural environment by using the best hunting techniques. Locate animal tracks and follow them to reveal your prey. Realism at the heart of the game experience Hunt animals with realistic behaviours and advanced artificial intelligence. Aim accurately to ensure you don't ruin your trophy. A faithful companion Use your hunting dog to track your prey. Labrador Retriever, German Shorthaired Pointer and Beagle, each dog has its specific hunting attributes. Lots of equipment to choose from Kit yourself out with over 160 weapons, accessories and clothing items from the best brands: Browning, Winchester, Bushnell, Kryptek, Verney-Carron...
Share Share Share
Promote for 50G

As of right now, the game isn't worth 40 dollars...
Pros:
- The fact you can pick rifles and calibers separate from each other is super cool. It's unique and actually a lot of fun.
- The guns look amazing, the lighting and detailing is really pleasing to look at.
- You can choose what the dot on your scope looks like. In general the customization of everything involving the player is awesome.
- Environments look pretty enough to pass, they could use a little work, but they are good for now.
- Most animal models look alright, but I'll address my biggest issue with them in the cons..
- The download size isn't too big, so people who don't have good internet won't wait for a week to download.
Cons:
- The animal's fur is way too thick and patchy.. They look manged and beat up, I personally think that if it was way shorter and actually covering the body instead of just spots, it would work fantastic. The elk antlers really need work, they don't look like they are trying to catch meteors out of the sky.
- Gun sounds are really lacking, they look great but they sound like little .22 rifles.
- There are only 3 scope options when it comes to magnification and model.. it would be really nice to have a few higher magnification scopes and the ability to choose what your scope looks like. ( example being: multiple 3x/4x/6x scope models)
- The dogs look kinda creepy to be honest lol, they just don't look natural at all.
- There need to be more maps (though if the developers stay with this project, I am sure they will add more. So this isn't a permanent con hopefully)
- First day dlc looks kinda sketchy, makes the devs look like they are grabbing for money.
In all brutal honesty it needs a ton of work, but it has SO much potential to be a fantastic game. If you aren't concerned with money, I would give it a serious try. As for the cons, I think they are pretty easily fixable. I would hold off on judging the game super hard as of now since its's still pretty new in the market. I think a price tag of 20 bucks would draw a lot more people into the game, and would be a lot more suiting for what is in the game right now.
To Neopica, PLEASE do not give up on this game. You have a game that has so much potential that it's dripping from the screen. People are calling out for a good hunting game outside of The Hunter, you have a chance to answer their calls. I personally am excited to see how you guys take this, and I know a lot of other people are too.

Really fun so far. It's different enough from Call of the Wild since (1) you have dogs to help you hunt, (2) it focuses more on "stalking" as opposed to ambushing, (3) the use of hunting licences, and (4) the practical implementation of hunting ethics. My main complaint is that you need to claim your animals in your cabin on the map before you exit the map and return to your lodge: if you forget to claim your animals in the map-cabin before returning to the lodge you could loose hours of progress. The game should not allow you to return to the lodge if you haven't claimed an animal. Other than that I have no significant complaints so far.

At 41 hours in the game I feel like I am only starting! It pays to take the time to find every campsite, tower and hunting blind. I hope they will add a zoom feature to the binocs and scopes. There are so kinds of animals to hunt, but you are limited to males on most species.

I recommend getting the Bear Hunter DLC, and the big Beretta gun pack DLC. There are 6 big maps, 2 in each region. The biggest thing that is missing is the option for realistic ballistics, i.e. bullet drop and windage. The graphics are mostly wonderful, but a little less impressive than TheHunter. But the game play I find superior in HS2. The guns are nice, and it is a nice touch to include AR-style weapons. All in all I am pleased with purchase, all $55.00.
Now the bad: at 13 hours I was unable to run the game due to a load error. Nothing worked to correct this, and both Nacor and Steam were no help at all. after a day or so the game suddenly worked fine again. this happened again at 13 hours and at 60 hours. My PC is a new gaming laptop, and all other Steam, Origin, and Epic games run fine.

I am VERY new to the hunting genre, and I do own this and the "other game" a lot of the other reviews are talking about.
First, I'd say, they are different games, they're trying to do different things. This game is a little bit more friendly to newer players, I think, although I do have a few suggestions to consider: When you're buying a weapon and asked to specify the gauge of rifling, it would be nice to see a list of animals that are legal targets for the gauge you're choosing. Also, we need an auto-walk button, that's vital for a game like this and it is missing (I did bind a keyboard macro, but this is an obvious keybind that's needed in the game).
The dog mechanic is awesome, I love it. I was never quite clear why I was able to spot animal tracks from 50 feet away in the other game like I'm the freakin' Predator. The dog explains that! I am very excited to buy a Labrador and do some duck hunting.
This game is in Unreal Engine, and so the ballistics feel like ballistics feel in the Unreal Engine. It's really that simple. It's hard to get a read on bullet drop and I'm forced to conclude that wind and wind direction simply isn't a factor in this game, as there is no gauge for it or indicator of any kind. Again: beginner-friendly, but maybe not 100% immersive. Personally, for me, that's fine!
Also, I feel like the actual walking/locomotion in this game is far superior. The pace of walking is slightly more generous, and I feel (for now) like animals aren't necessarily going to run away at full speed if I step on a twig from 100 yards away.
I can see how this might get slightly repetitive, but...what is life but repetition, to one degree or another? Just like actually hunting, the experience is going to be vaguely the same each time out of the lodge, but the exact way things play out will differ.
Add a menu option to quick-travel to the cabin, please. When I'm done hunting, I want to be done ASAP. It might be because my family needs me IRL or I have a work project that pops up or whatever, and whatever the reason, I don't want to walk back to the cabin to claim my animals after all the walking I already just did.
I really did enjoy the game, and I'll be playing it a lot. For *my* money it's certainly worth what I paid for it, and I suspect that oiver time I will play this game more than the "other" one.

I was initially sceptical about buying this game as I already own other Hunting Sims but I'm glad I ignored the negative reviews and made the purchase. HS2 has some unique physics, camera options (inc 3rd person), character customisation with clothes visibility ratings & three different breeds of Gun Dog. Most of the maps are sparsely populated compared to other games of this type making it much more rewarding when you finally bag a Legendary animal!

If your looking for that one hunting game that delivers the best experience, The Hunter Call of the Wild is for sure the game for you. If you are like me and love playing different hunting experiences, this game is great. While THCOTW is the superior experience, this game is alot of fun and is a great improvement on the original. Great variety of weapons and animals to hunt. Its greatest feature, is the dog companion by far. Your furry buddy makes hunting and tracking very enjoyable while not making it too easy either. Thumbs up for the dahgs