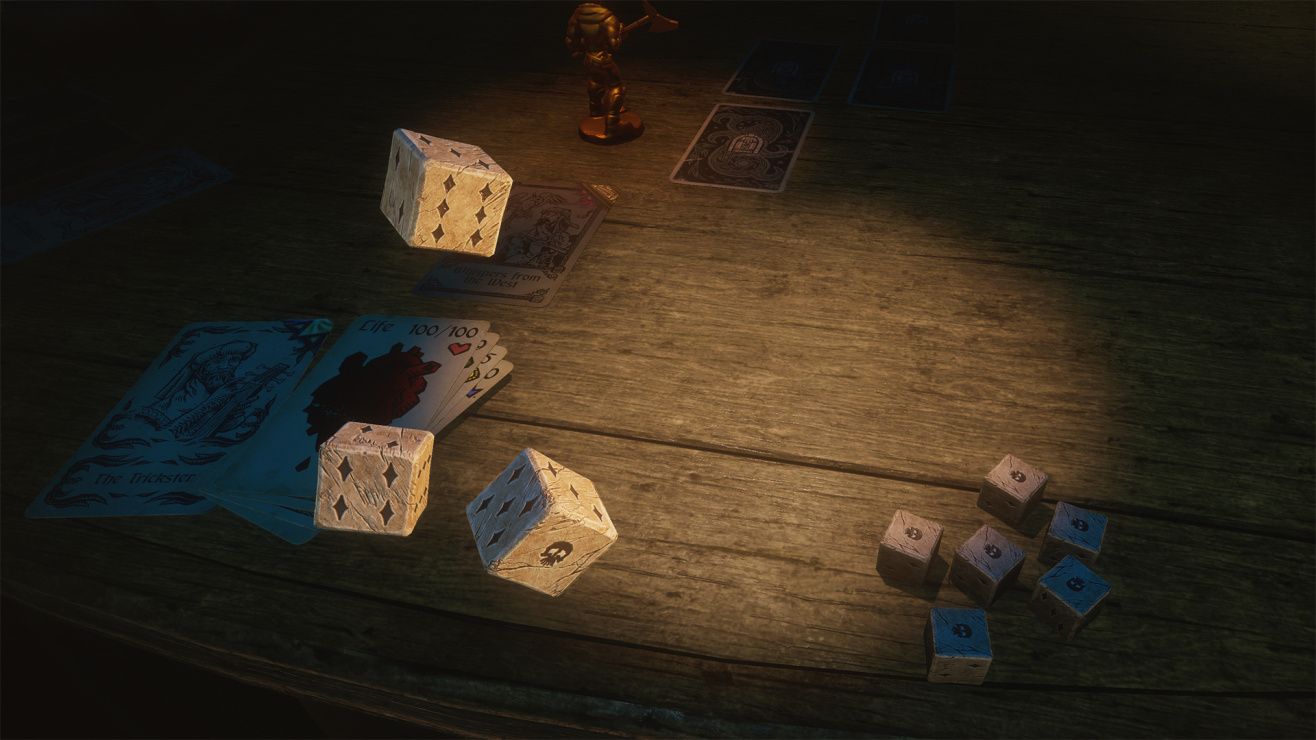 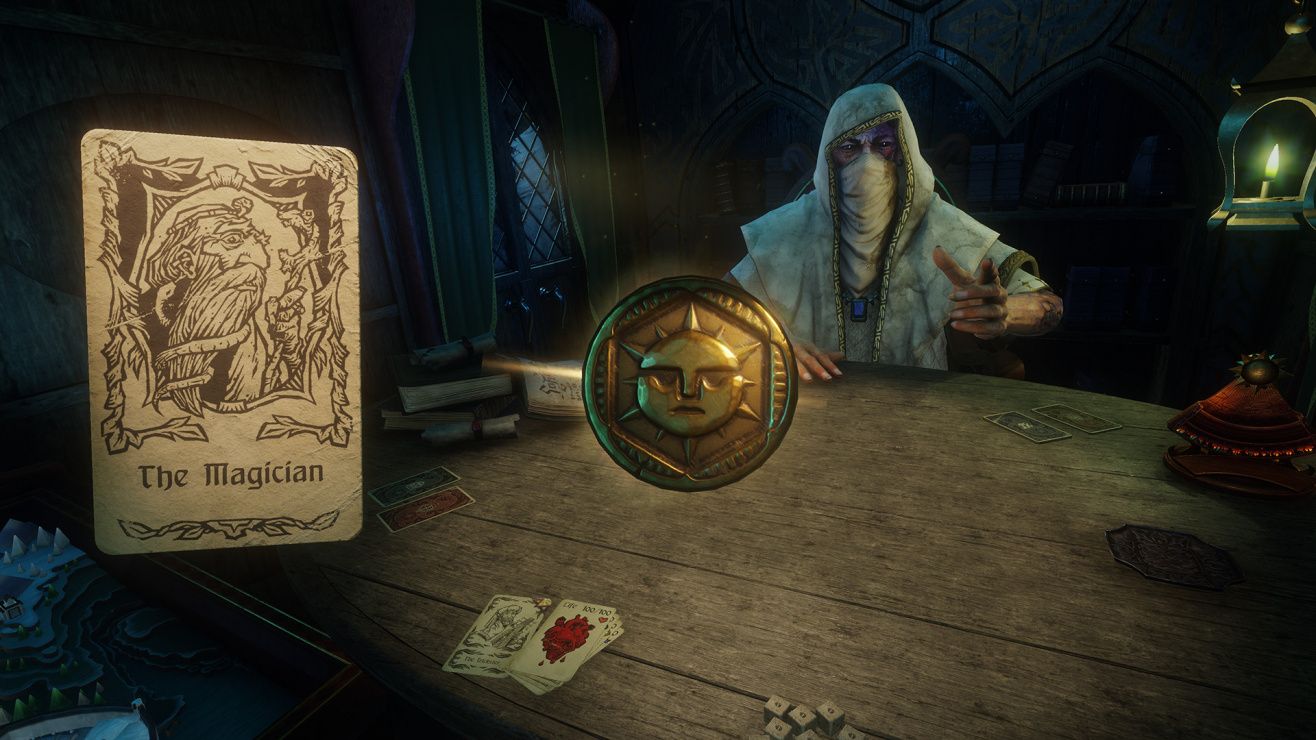 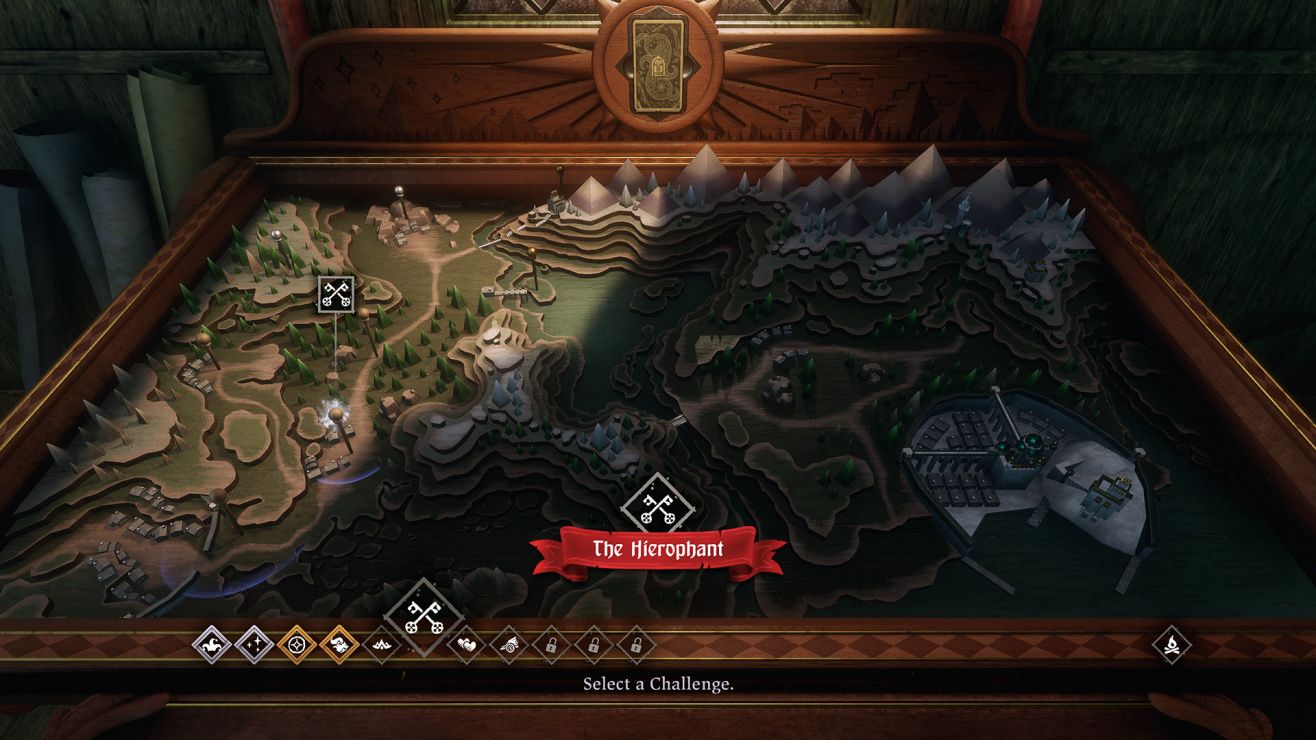 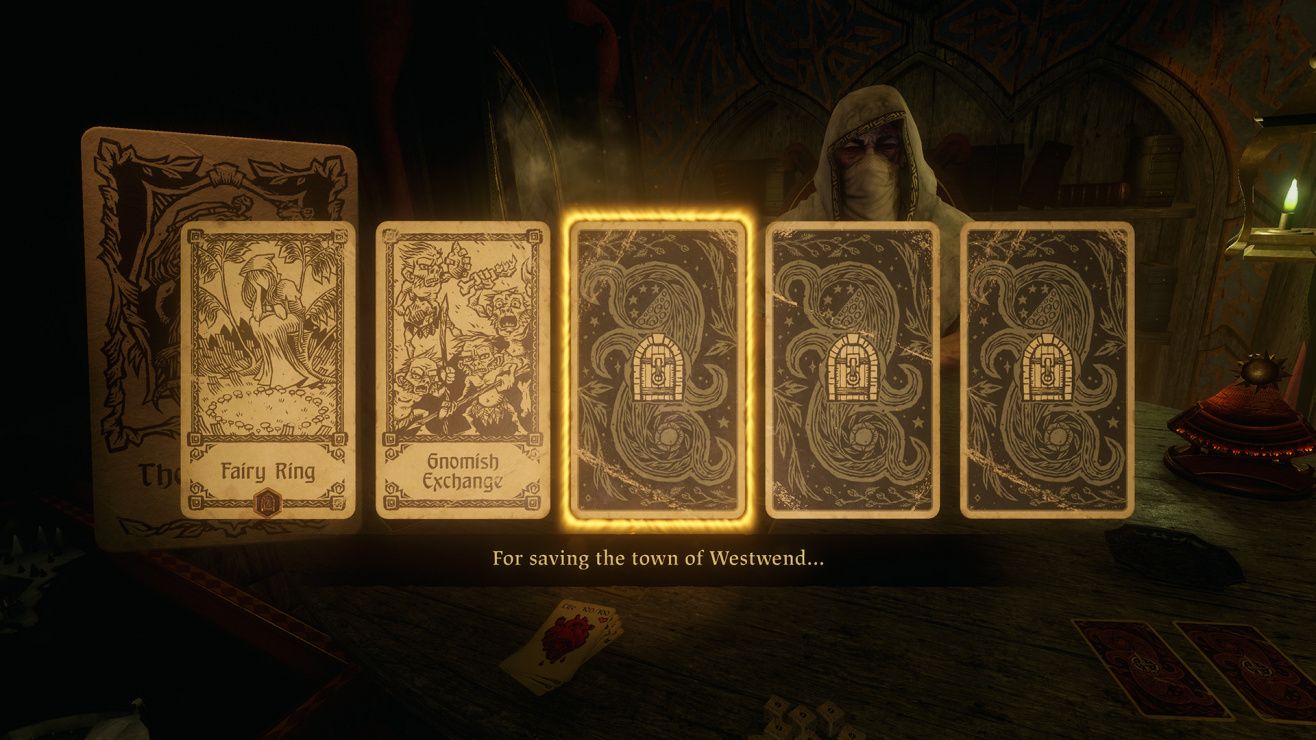 PC Steam Console Playstation action Xbox indie Nintendo singleplayer rpg card game boardgame
Hand of Fate 2 is a dungeon crawler set in a world of dark fantasy. Master a living boardgame where every stage of the adventure is drawn from a deck of legendary encounters chosen by you! Choose wisely - your opponent, the enigmatic Dealer, will pull no punches as he shapes you into the instrument of his revenge. The table has changed, but the stakes remain the same: life or death! KEY GAME FEATURES A world transformed - 100 years have passed since the Dealer was usurped and the Game of Life and Death gained a new master. 22 exciting new challenges that will push your deck-building skills to the limit - Hunt fiendish assassins, reunite star-crossed lovers or build up a fortress to withstand a raider assault! Enlist the aid of all new companion characters - team up with them in battle, or have them bend the rules of the boardgame in your favor! Hundreds of new encounters, artifacts and items to earn and upgrade.
Share Share Share
Promote for 50G

Listen, this isn't Slay the Spire. You're not going to be hurling cards left and right. It's not even a card game. It's more like an intimate game of D&D, so come ready to hear a story, make choices, manage resources, and do some Shadow of Mordor-ish combat. Persistent unlocks and great storytelling are this game's strong points.

Hand of Fate 2 is my favorite digital card game and my favorite roguelite, improving on the 1st one in nearly every way. I recommend it to anyone who is not a hardcore action or fighting game fan, as they will be disappointed by its relatively weak action combat in an otherwise unique and stellar game.
Here is why I love it, having completed half the campaigns and played endless mode a dozen times:
+ Doesn't have too much RNG for me as it balances strategy and skill, while your ability to choose most of the deck is well balanced against general or campaign-specific cards that get added.
+ Has enough progression & unlocks through unlockable companions, tokens on cards & campaigns that contain more cards to select in decks. Which means...
+ It doesn't rely on me to just "git gud".
+ Deck building isn't too complex for me, nor are there complex dependencies between cards
+ Story lines told through series' of unlockable cards & characters are decent (plus campaigns), instead of merely some main storyline.
Here is what else you need to know:
+Except for limited Supplies cards you start with, your deck building determines the possible encounters you may encounter and equipment you might acquire
?After you select your deck, it is shuffled with other encounter cards and then delt as an explorable map of one or multiple levels
+Core gameplay loop in a play through is often: Move from encounter to encounter, make choices, that result in gain/lose/trade resources or equipment, do some gambits, do fighting, repeat all that until you reach and kill a final boss.
+Endless mode allows for crafting a story of sorts that depends on which challenges/quests you accept in each endless "level"
-Combat is 3rd person action which works ok but could be better in not feeling kinda stiff, while riposte technique (attack after block) is often an unnecessary risk.
+Gambits are games of subtle skill (perceived as chance games) which can be controlled or tracked to some extent: Shuffled cards, rolling dice, wheel of cards, or pendulum.
?The game is more challenging than the first, but when I get stuck I'll replay endless or a completed campaign in order to unlock more tokens. Then I'll keep new/unknown cards out of the campaign I'm trying to beat.

Everything about Hand of Fate is vastly improved in this sequel, from the mechanics, to combat, to the story and characters within it. As an indie game, however, it is not without its quirks and flaws.
Core gameplay:
+ Unique blend of deckbuilding, action RPG, and text adventure.
+ Cohesive storyline that explores the game's world and why it came to be that way.
+ Companion characters are well-written, with some encounters having unique responses for particular characters hidden in them.
+ Each adventure in the game provides a different mechanical challenge, gameplay from going stale.
+ Steam Workshop and Mod support.
- The Dealer is a little less sinister than the original, but the reason for this is explained in the story.
- Crashes occur infrequently during combat.
- If you are experienced in action RPGs, combat is not overly challenging unless you're playing high level Endless Mode.
- Endless mode is a buggy, half-baked afterthought to the main campaign.
- The shuffling cards mini-game is frustrating even for an experienced player.
- DLC feels a little overpriced for what it offers.
Bottom-line, if you're a fan of rogue-likes and adventures with a lot of text in them, Hand of Fate 2 is worth picking up. Just don't get sucked into playing Endless for very long.
For more reviews like this one, follow the ಠ_ಠ Reviews Curator page.

its worth the price. fun game, sad that the company folded

This is a deck-building rogue-lite I guess. I think that’s the right genre, but when I hear that genre I think more Slay the Spire. Instead, this is a game where you play a card game with a variety of quests or modules. Players bring in their deck of cards to be mixed with the module that you’re playing and each module or quest is different.
A big piece of each quest and story is the layouts of cards, as well as a flow to their story usually involving players having to reach a point, accomplish some goal, or find a specific card. Since the player brings some cards, they can change how the journey goes, but the main story to the quest is locked in.
Hand of Fate 2 though is also heavily in that rogue-lite area. Each attempt at the same map, even with the same cards is randomized and players will be challenged on how to accomplish the goals set forth. There’s always a good twist that makes each level feel different than the rest of the game.
The combat here is still pretty hard from the first game, the experience though is great if you can get into it. About halfway through this game, the difficulty seems to spike upwards. I do want to play more, though, because there are not many games like this and I enjoy the board game aspects of it but it can be a little bit of a slog.
Related Video:

Super Fun Game if you just wanna chill and not get into a deep story type of game. But it is very engaging and unique type of game that combines card gaming with RPG