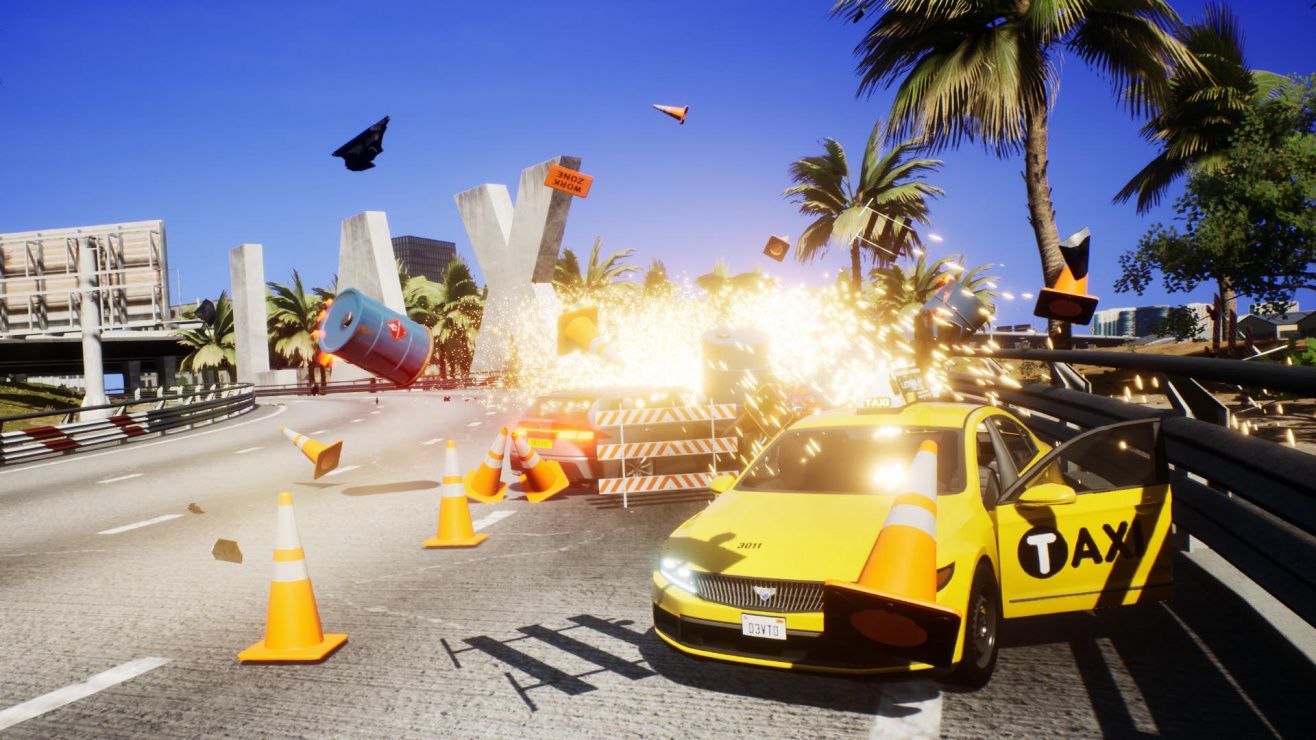 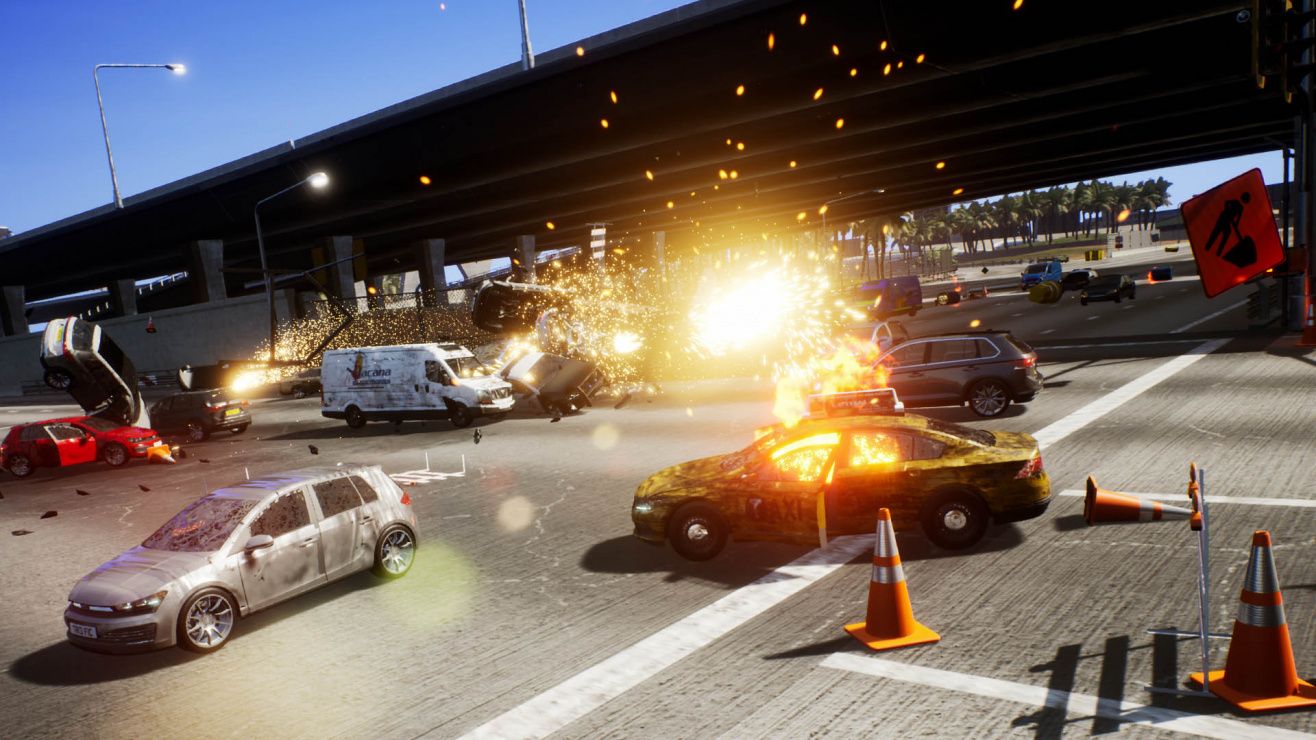 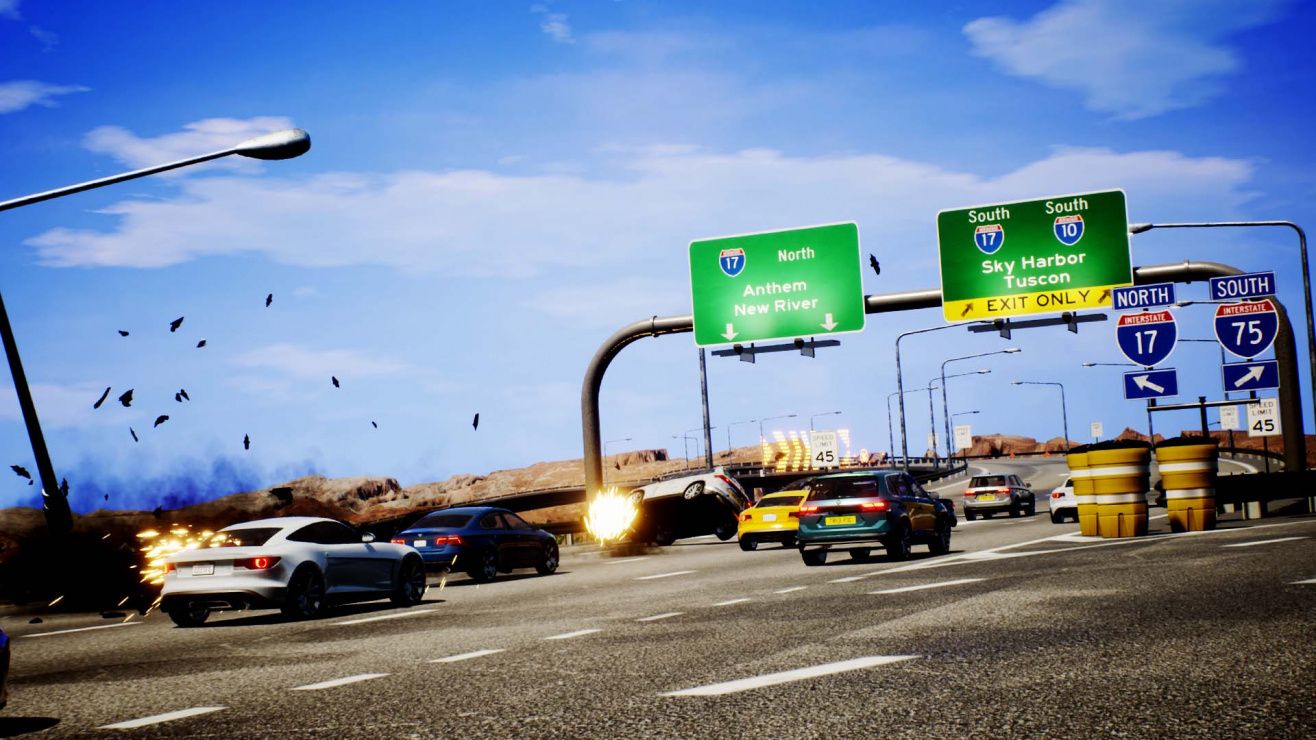 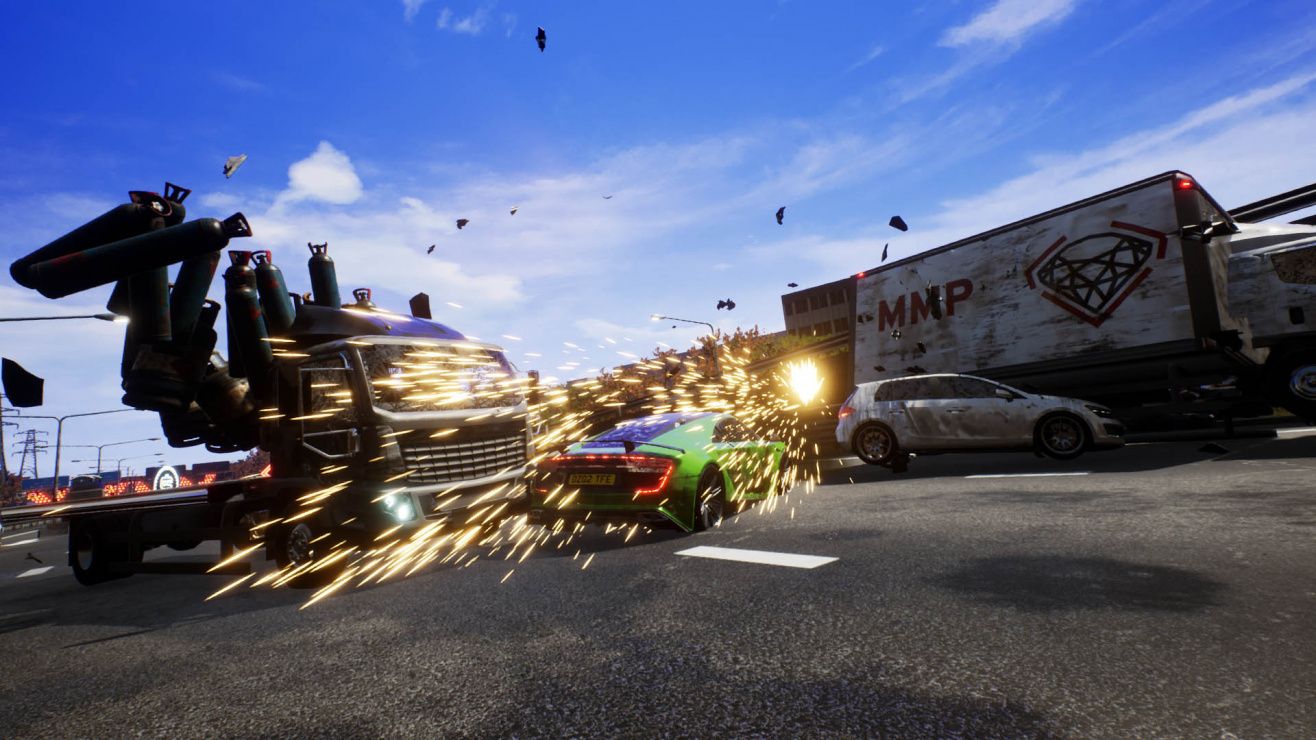 PC Steam Console Playstation Xbox indie racing driving cars speed destruction crash
Danger Zone 2 takes the crash testing action out of the Test Area and onto real public roads. A high speed driving game featuring speed, traffic and crashes, Danger Zone 2 lets players loose onto the Freeways of the USA, the Motorways of the UK and the Autovias of Spain. Using advanced real world physics and the power of Unreal Engine, Danger Zone 2 lets players ‘crash for cash’ and compete against each other to cause the most chaos on the road.
Share Share Share
Promote for 50G

In a world without new Burnout games, one game dares to be all about sweet car crashes, and then some.
Decent graphics. Tight arcadey controls. Side objectives that re usually fun but sometimes get in the way of crashing. But most of all... CRASHING.
DANGER ZONE 2
Either you crash... or you DIE.
Rated E.

Yup it's crash mode
There isn't too much to say about this title. If you loved Burnout 3 back in the day for its crash mode then you will love this game. You drive a vehical up to the dangerzone then try to create the biggest crash possible. Visually the game does look good. Sadly no music to get the blood pumping but even in B3T you only had music when you did races.
What the game does it does well and that is the recreation of the crash mode. It also shows that the complete package will need an actual race mode, matching music and a smack talking DJ but even that is fixable should the developer decide to release it as dlc.

If you got nostalgia for Burnout's OG Crash Mode. Then buy this, worth the 20 bucks IMO. And way better then the first Danger Zone.

TFE have done an amazing job improving on the shortcomings of the original and making this game a huge step closer to the game that OG burnout fans (and likely TFE themselves) have been dreaming of for a very very long time. This game really reminds me of a nice hybrid of the burnout 2 and 3 crash mode - and with current gen graphics it really is a new spectacle to watch everything around you get fucked up by your own doing.
Only real critisicm I have at the minute is the UI seems a bit basic, it's just white text. Personally would add a bit of a black back gradient against the back just to make it pop out a little more. All things considered though I'm really impressed by this game and cannot wait until the next step closer to the full succesor of Burnout that we all want.

I wanted to fully play the game before writing a review. First off I want to say, if you liked Burnout as a kid you will love this game like I did. I fully recorded all my gameplay and uploaded it to Youtube if anyone wants first hand reactions.
Pros: The levels look amazing! I personally did not finish the first Danger Zone due to the dark enviroment. The SFX are awesome too! But the big part is the crashes, and yes they are spectacular too! My favorite levels had to be the ones where we drive the Big Rig, the honk at the start means your in for a good time. The slow-mo jumps are so cool! The cars look excellent. Traffic checking is so much fun, dare I say more fun than in Revenge.
Neutrals: The Run up objectives. Some of these we're really fun like the one in Jack the Hammer, which includes checking traffic into 4 tankers on the way to the Danger Zone. My least favorite objective was the one in Tanker Schoen which requires to make a jump and hit a tanker at the end, needless to say I think thats one of the few levels I have a bronze on. Failing a run up objective time and time again got tedious on a few levels.
Cons: The cars feel really really slippery. This is most noticed when trying to perform boost chains, trying to traffic check while boosting can sometimes spin your car out of control which did not happen in Burnout Revenge. I also really didn't like drifting. Besides the one level where it was an objective I never used it again. Often times the drifting would lead me straight to a wall. And probably my biggest problem is one single glitch. Occasionally while running up to a danger zone a traffic car will not be moving. When attempting to check one of these cars you will crash and have to start the level over. This glitch was not a one time thing either as it happened across multiple levels. One other weird glitch I got one the 2nd to last level was a stop sign got jammed into the car and it spun me off the cliff.
Even with these negatives I had so much fun with this game and I look foward to Dangerous Driving and anything from TFE!
PS: Change your camera to first person when performing boost chains, it makes it much easier.

I enjoyed the first game more, some runner-up objectives are annoying and feel forced in order to get the platinum medal. The explosion model is so dissapointing than its predecessor.
This game isn't that bad but i think the first game represent even more the Crash Mode of Burnout 3 Takedown than its succesor.
Still TFE tried and while to me this game isn't that good compared to the first, i still liked in the end.

So Danger Zone 2 is a love/hate relationship with me as of the release. I love everybody at Three Fields Entertainment for risking everything by leaving EA and forming their own studio in order to bring back a franchise that somehow EA ruthlessly culled for no apparent reason other than, Need for Speed. The game takes some great leaps forward by having actual urban environments instead of just a test facility, although I think it could have been cool if they kept with the whole simulation thing, except this time you see the city/map render in like Assassins Creed, which also opens the door to doing some potentially crazy things with the map design other than just basing it on real architecture. z
Gameplay: Samey, but not terrible
Just like Danger Zone 1, and Burnout's crash mode before it, the gameplay is once again all about launching your car into lanes of traffic in order to cause as much damage as humanly possible to rack up a huge score. Now they did spice things up just a little bit by having optional challenges at the beginning of every level on your way to the danger zone . These challenges are optional, but not completing them will almost guarantee that you will not place very high in the end because the cash reward for completion is no chunk change. It's a nice addition I will say, very simplistic but I get what they were going for. Crashing is basically the same as before, except that traffic checking is now a huge part of the gameplay, to the extent that you now can hold X/B to sorta direct the direction in which a traffic checked car will fly. The physics work pretty ok for the most part, it is over the top, but hilarious watching these thousand plus pound hunks of metal just get launched all over the place. The pickups are practically the same, except they added an instant smashbreaker pickup, which does exactly what it sounds like. I would personally like to see the heartbreaker come back (although it was rage inducing but also fun in a sadistic way to stress over hitting one). There still isn't any real progression to speak of, you just complete a level then move on until you have completed every level, really wish there was something more but hopefully Dangerous Driving will fix this in the Winter. Overall decent gameplay, but still mostly the same as the first game.
Graphics/Visuals: Ok
This is going to be an "ok" rating for me. It definitely has that UE4 look to it, which isn't really bad, but 3FE should really work on establishing an art style like the Burnout franchise did, which ties directly to the UI which is a bit too simplistic for a game of this arcadiness, maybe try to hark back to Revenge days with the UI design. The effects are not bad all things considered but please maybe tone down the spark effect, or allow us to customize it in the options because it is far too heavy. Same kinda goes for motion blur, I understand it is actually beneficial for the consoles that are locked to 30 or machines that can't do 60, but at 60 fps it does make it a little hard to tell what is going on in addition to the over 9000 spark particle effect. The menu is also a bit small, you have the DZ2 logo all small in addition to other menu elements, which is odd to say the least because DZ1 menu was actually kind of cool. Overall its not bad graphics, but could use work. It is worth mentioning though that there seems to be section of levels where terrain textures bleed on and overlap the road, even having some section where it creates little hills that block your view entirely as you clip through the texture, hope that is fixed asap.
Performance: Great
Simply great, no real issues here on a Ryzen 1600 and a GTX 960 2GB. Really great optimization overall for such a small studio, even when shit is hitting the fan in the crash junction.
Overall: Decent
For $20 it is not a terrible game, but I am almost shocked and appalled that both pre-level flythroughs and post-level damage assessment have been cut completely even though they were in the first game and I find are essential to the Burnout franchise. Not sure why these 2 things got culled from the sequel but please 3FE, if you read this, please add them back with a future update, they are a BIG deal for me personally. I hope this game sees success so that Dangerous Driving at the end of the year can be as amazing as possible because I know 3FE has great talent, they just need the financial backing to get this thing rolling. Just please 3FE, update this game on the road to Dangerous Driving, would love to see more levels, new challenges, new vehicles to play with, etc.